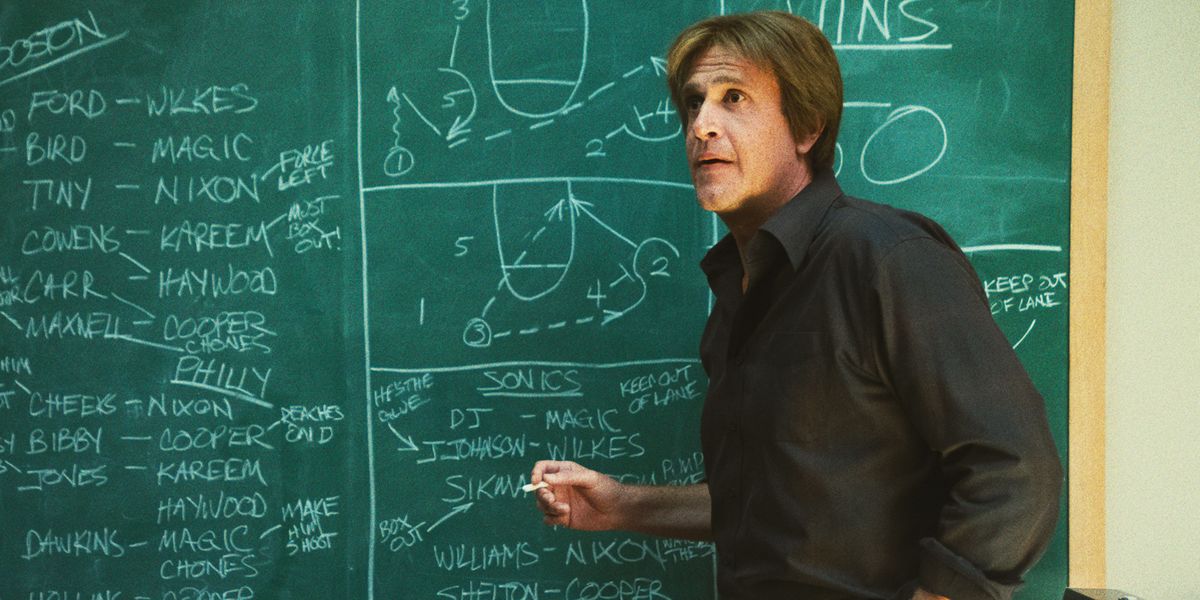 ‘Winning Time: The Rise of the Lakers Dynasty‘ reaches the climax of its debut season by setting up a classic underdog final between the LA Lakers and the Philadelphia 76ers. In the sixth and deciding game of the 1980 NBA Finals, the Lakers are without their talismanic captain Kareem Abdul-Jabbar and power forward Spencer Haywood. As a result, every member of the team must rise to the occasion and perform beyond their capability to win the game and the championship.

At halftime, Lakers’ Head Coach Paul Westhead (Jason Segel) motivates his players by delivering a speech straight from William Shakespeare’s play ‘Henry V.’ As Westhead quotes lines from the famous St Crispin’s Day Speech, viewers must be curious to know whether the coach actually used the speech to motivate his players in reality. In that case, here is everything you need to know! SPOILERS AHEAD!

At the start of the 1979-80 NBA season, Paul Westhead was the assistant coach of the LA Lakers. He joined the team after longtime friend Jack McKinney was hired by Jerry Buss as the team’s head coach. However, merely thirteen games into the season, Westhead found himself thrust into the spotlight. On November 8, 1979, McKinney suffered a horrific accident that left him comatose and incapable of coaching the team. Buss appointed Westhead as the interim Head Coach of the Lakers.

Before his time with the Lakers, Westhead had only coached at the college level while teaching English literature. The coach was fond of Shakespeare and was known for quoting the legendary playwright during the games to motivate his players. As a result, he earned the nicknames “The Professor” and “The Bard.”

When the LA Lakers assembled to play the sixth game of the 1980 NBA World Championship Series against the Philadelphia 76ers, they led the series 3-2. However, with a thinly stretched squad, the Lakers were the underdogs for the game. Before the game started, Westhead told his players, “Everybody expects us to be courageous tonight. We’re not here to be courageous. We’re here to win,” he added.

In the series, Westhead delivers his pep talk during the halftime and quotes Shakespeare’s St Crispin’s Day Speech from the play ‘Henry V.’ In the speech, Henry V urges his soldiers to fight against the mighty french army on the eve of the Battle of Agincourt. Despite being vastly outnumbered, the speech encourages Henry V’s men to focus on the glory and figurative immortality that will come with the victory. Thus, Westhead compares the Lakers’ situation to that of Henry V’s army.

While Pearlman’s book alludes to Westhead’s pre-match speech, it does not mention the half-time pep talk from the coach. Moreover, there are no reports of Westhead quoting Shakespeare’s St Crispin’s Day Speech at halftime. Lastly, Westhead’s autobiography, titled ‘The Speed Game: My Fast Times in Basketball,’ also does not mention the coach quoting the classic piece of literature. Therefore, it is safe to say that the show’s depiction of Paul Westhead quoting Shakespeare’s St Crispin’s Day Speech during the 1980 NBA Finals is a fictional addition from the show’s makers.

Read More: Was Michael Cooper Injured During the 1980 NBA Finals?