10 Games You Must Play if You Love Destiny 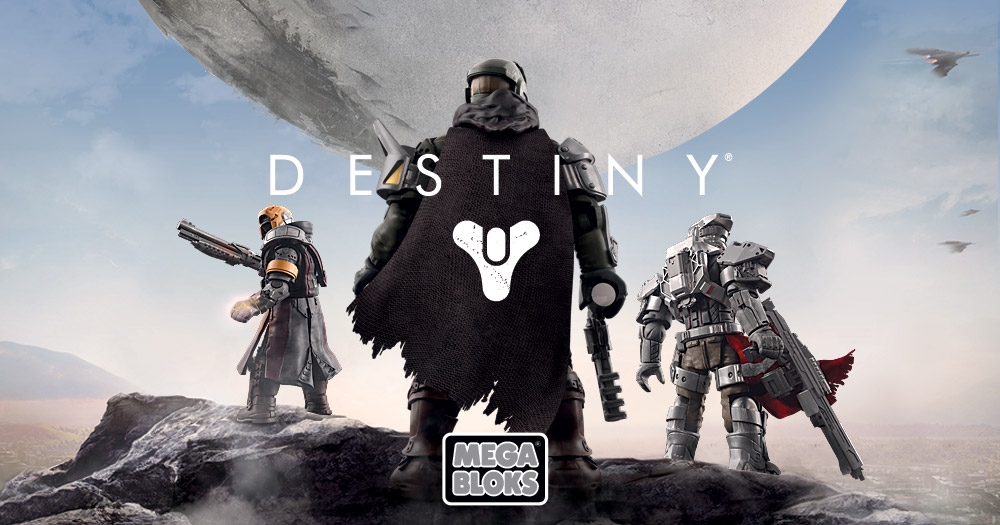 Destiny is a series that took the world by storm and all gamers worldwide were fixed in a trance, trying to get the best loot possible. We had a lot of expectations from Destiny 2 but when it failed to generate the same kind of hype as the original, we started looking for games that are similar to the Destiny series and came up with the following list. The original Destiny still does enjoy a fair bit of population but it is nothing like what it used to be. So if you are looking for a game that still enjoys a bustling population, then you’d probably want to look into one of these games. Here is the list of video games similar to Destiny that are our recommendations. You can play these games like Destiny on PS4, Xbox One, Xbox 360, PC, iPhone, Android, mac or even online. 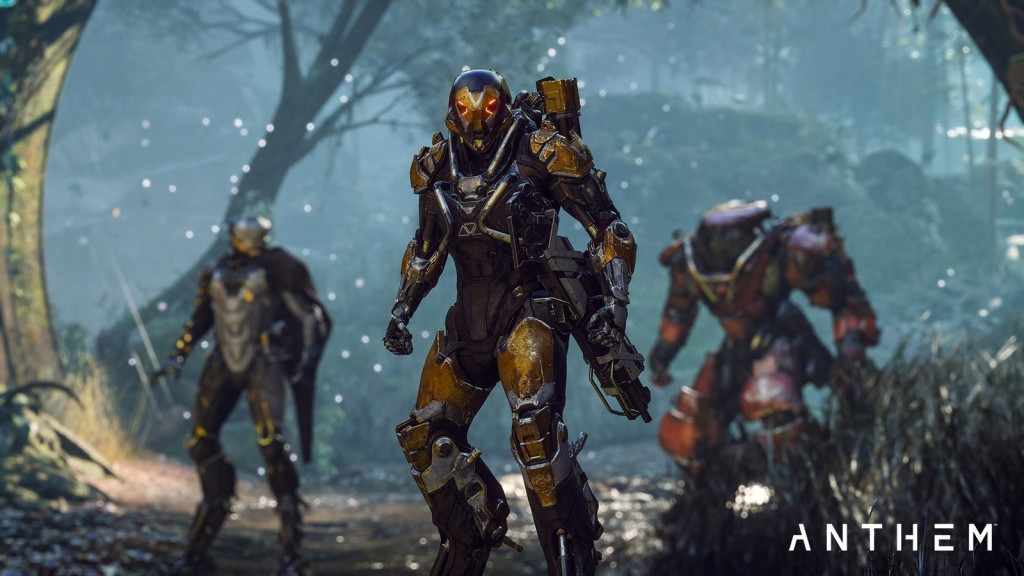 Anthem is a game that we have been eagerly waiting for a long time especially because the trailers and gameplay videos for the game looked amazing but boy were we in for a disappointment. The gameplay videos released for the game looked extremely fluid and polished but the game that we got was mediocre at best. Still, it does have some wonderful graphics and sometimes the combat will also give you a rush but what little story the game does offer is quickly overshadowed by its repetitive grinds and gameplay mechanics.

What’s even more saddening is the fact that the game had huge potential and coming from the house of Bioware, we had massive expectations. Overall, it is okay but once you play through the campaign, you will be amazed at the level of lost potential in the game. Hopefully, we’ll get a bunch of free DLCs for the game that will add more content to the game because going by the endgame, it can really have its moments at times. Still, it’s EA and we need to wait before we can get our hopes up yet. 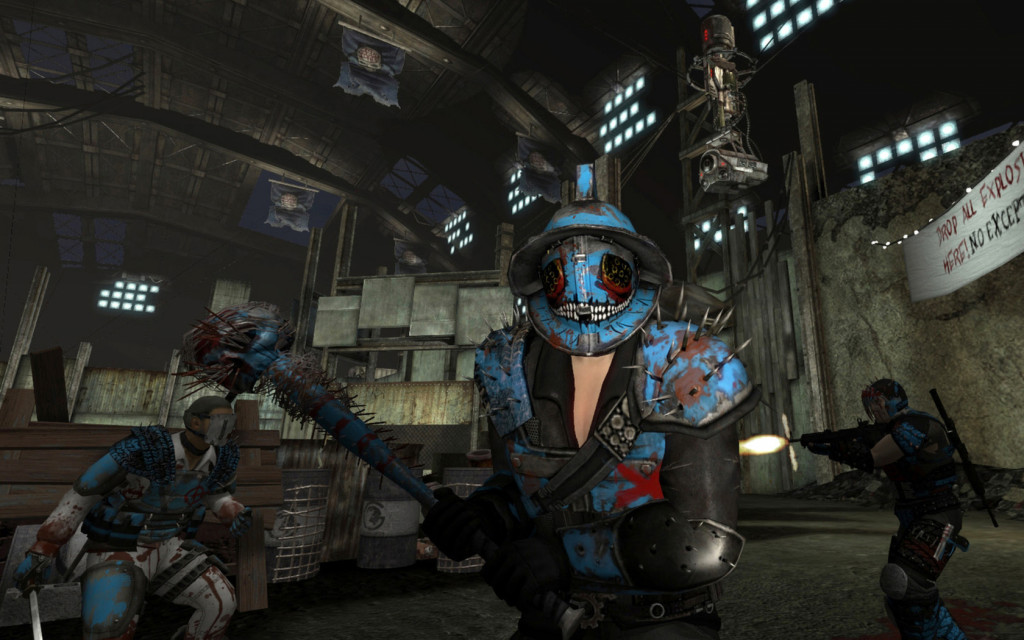 Fallen Earth speculates the worst that humans can stoop down to and allows its players to witness the end of our planet through a massive MMO set in The Grand Canyon. The world is an exact replica of the Grand Canyon using satellite imaging and then rendering them through computer software. The game is set in the 21st century when a global corporation builds an outpost in the Grand Canyon shortly before a pandemic strikes Pakistan and parts of India. The virus is named The Shiva virus after the Hindu god of Destruction Shiva, whose other form signifies a dancing figure due to the symptoms displayed by the people affected by it.

People started showing ‘dance like’ convulsions that were extremely painful for the patients and as the pandemic spread throughout Europe and to other parts of the world, nations started blaming each other for engineering the disease. As large cities and towns died out completely, the whole of Earth descended into chaos with world powers not knowing what to do. Finally, the global powers unleashed havoc by setting free their nuclear weapons upon their enemies and as a result, less than one percent of the total human population survived. One of the outposts was the Grand Canyon Province where you start off your game. 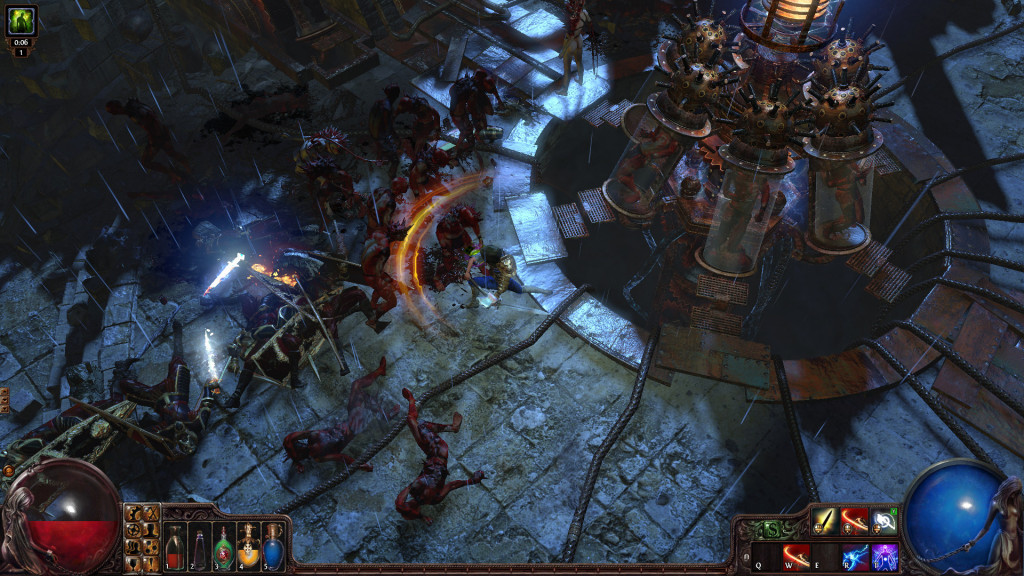 Path of Exile is an action role playing game developed and published by Grinding Gear Games that plays very similar to the Diablo series. Now we know that you came here for games like Destiny but hear us out for a moment. The looting system in this game is one of the best that you will ever come across any game at the moment and the best part about this game is that it is completely free to play. You can totally head on over to Steam right now and download this game free of cost and enjoy all of the content that it has to offer. There are various items that you can loot from your enemies and there are a lot of them. Sometimes, your screen will completely fill up with items and you need to go through each of them in order to figure out the best one for your situation. The game is set in a fictional island that once used to be a sprawling kingdom but has been reduced to a colony of criminals lately. You wake up in the island exiled by your people and now you must fight your way through the entire island of outlaws and survive.

Diablo III is an action hack and slash role playing game developed and published by Blizzard Entertainment in the year 2012 to massive critical acclaim. The game is the spiritual successor of Diablo 2 and is the third installment in the Diablo series. It plays mostly similar to the previous games in the Diablo series with the player choosing one of seven classes and then going on an elaborate quest to take down Diablo, the primary antagonist in the game. Diablo is the series that made hack and slash role playing popular and also introduced various new mechanics into the genre. The game contains an extensive looting system that allows the player to customize their character right down to the core. All the equipments that you equip have a corresponding socket for gems and you can power up these equipments further by equipping stronger gems into these sockets. The level of customization to the character is beyond the scope of this article, so you better check out the game for yourself if you want to find out more. 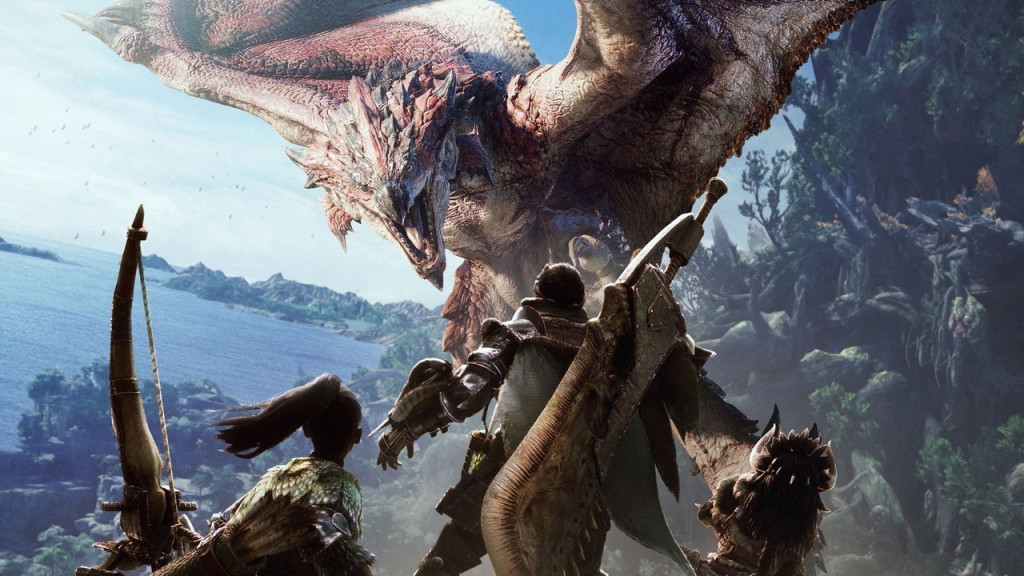 Monster Hunter: World is a beautiful action RPG where you are tasked with slaying monsters in a sprawling open world. The gameplay is quite similar to the other games in the series with the player taking up missions in the central hub and then being dropped off to a location in the map which can be in one of the six zones. These zones are connected unlike the previous installments in the game, allowing the player to traverse through huge distances without encountering a loading screen. This makes the experience more immersive and akin to other MMORPGs out there where the world is one big chunk and all the players reside within it.

You have the option to choose weapons before setting out on a mission and there are a total of 14 weapon types, ranging from hammers to bows, each having a certain advantage over a particular type of monsters. You need to fight the monster and reduce its health in order to capture or slay it completely, which will then provide you with loot. This loot may be parts for other weapons or a brand new weapon itself depending upon the level of the beast and a bit of your luck. The game was developed and published by Capcom and released for the Xbox One, PS4 and PC devices in the year 2018. 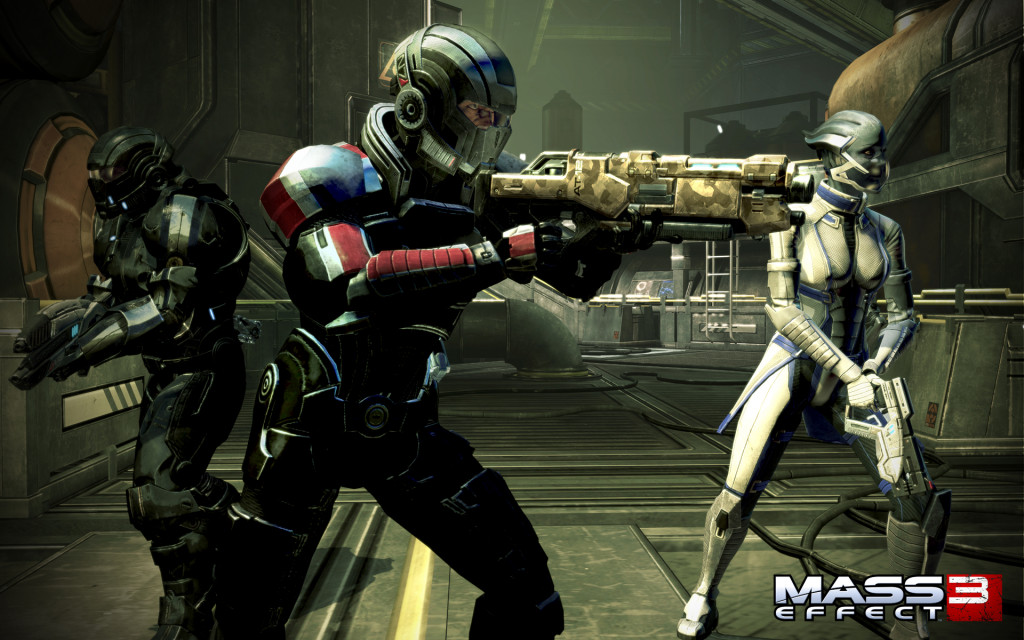 Mass Effect is one of the most popular sci fi action shooters out there having received massive critical acclaim for their original trilogy. The gameplay is smooth and the characters are well developed with a gripping storyline that keeps you hooked for the most part of the game. Mass Effect 3 is the last installment in the original trilogy and was developed by BioWare and published by Electronic Arts in the year 2012. The game’s setting is in the Milky Way Galaxy set far in the future where races and species are fighting with each other for dominance. You control the character of Commander Shepherd, an elite human soldier whose mission is to restore peace to the galaxy by forging alliances with the different races.

The RPG elements of the game are pretty deep and also have a drastic effect on the gameplay of the game. All the decisions and choices that you make during the course of the game have an ultimate effect on the final endgame and the story. It went on to secure several awards from many reputed publications, each one praising the game for its RPG elements, gameplay mechanics and compelling story. 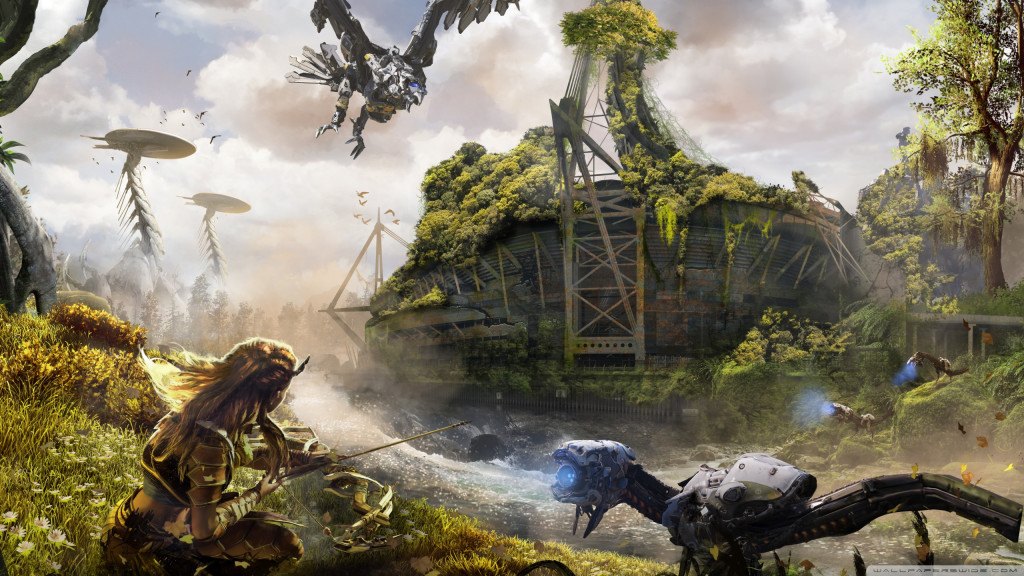 Horizon Zero Dawn is an action role playing game set in an apocalyptic dystopian future where the human race has been wiped out due to a cataclysmic event. The world is one of the best we have ever seen in any recent video games with some of the best visuals that you really need to experience for yourself. It is a lush green world that does not really feel apocalyptic at all with tall towering mechs inhabiting the green lush fields. How these mechanical beings came to existence is told through the campaign mode where you play the character of Aloy, a human belonging to the new generation, a race oblivious to the doings of the past generations. They have grown to worship these ancient creations but Aloy begins to understand the technology that’s behind the constructs. Play through an extensive campaign where you unlock the secrets of the old world as you fight and tame these mechanical monsters. 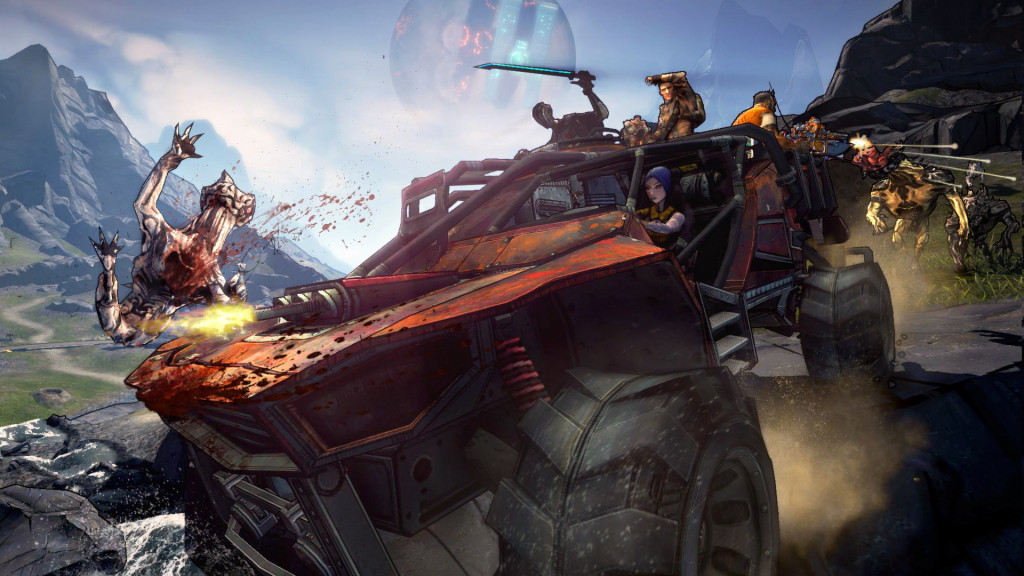 Borderlands is a series that has been widely regarded as one of the best action adventures of all time. The game calls itself a looter shooter and is based in a steampunk setting where you are required to hunt down some of the most alluring and mysterious objects in the land. Borderlands 2 is the direct sequel to the first installment, Borderlands, and takes the original experience and polishes it for modern systems. The whole campaign is playable in co-op, so this is the perfect game if you are looking to spend a weekend with your gaming friends. Choose a character out of a total of six and fight your way through the trash land in search of loots and other valuables as you upgrade and maintain your character. Borderlands 2 has been highly praised by critics for its co-op gameplay and its comical portrayal of a dystopian future that really does manage to pull you in right from the starting sequence of the game. 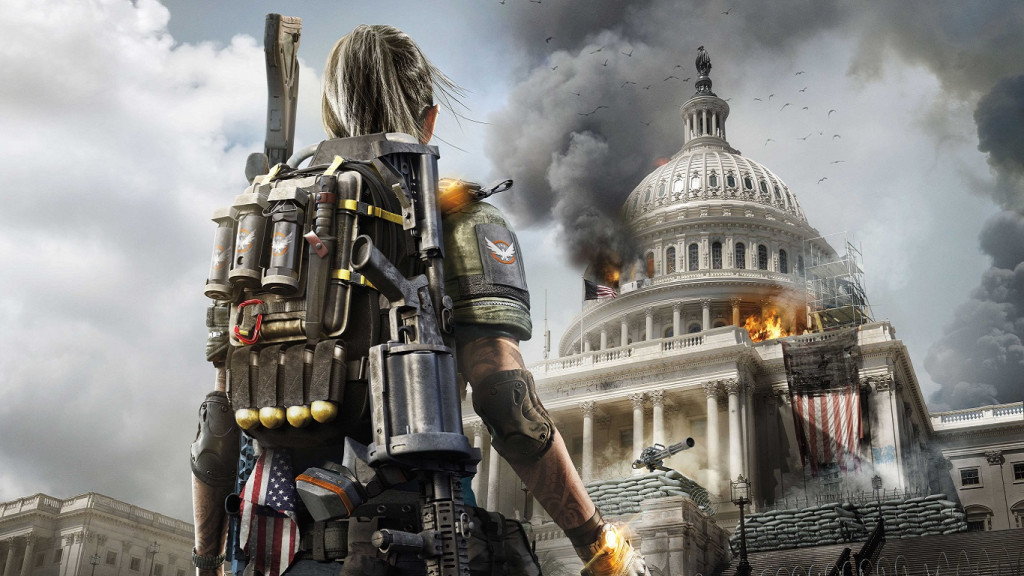 The Division 2 is a game that has just been released for PS4, Xbox One and Microsoft Windows, very much in the style of the Destiny series. It has been developed by Massive Entertainment, published by Ubisoft and has managed to draw the attention of gamers worldwide. The Division 2 borrows most of its gameplay mechanics from its predecessor where you are required to fight for the future of humanity in a battle between the survivors and marauders. You can pick up missions and quests and complete them in a co-op setting with your friends. The game also allows the player to take part in raids which are elaborate battles requiring cooperation between 8 players. These provide the players with better loot that is required for progressing through the game. We shall have more updates on the gameplay elements after we get to check out the game some more and dig deeper into it, but judging from the first impression from the community, the game does look great. 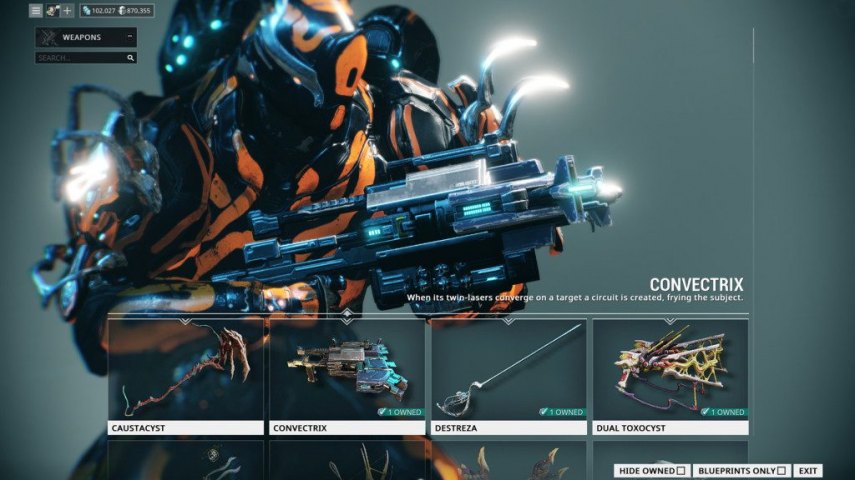 Warframe is an action shooter developed and published by Digital Extremes back in the year 2013 that plays very similar to the Destiny series, albeit in a third person view. You are tasked with competing objectives with your friends in a co-op environment. The main aim of the game is to gather loot from the missions that will allow you to upgrade your gear and provide you with a better chance of surviving against tougher enemies. This is one game you definitely will enjoy if you liked playing the Destiny series and we highly recommend it to fans of the series. A recent version has been released for the Nintendo Switch, making the game very accessible to players from across the world. It is completely free to play on all consoles, so if you haven’t checked out the game before, this is the perfect time to do so.