6 Games You Must Play if You Love Starcraft 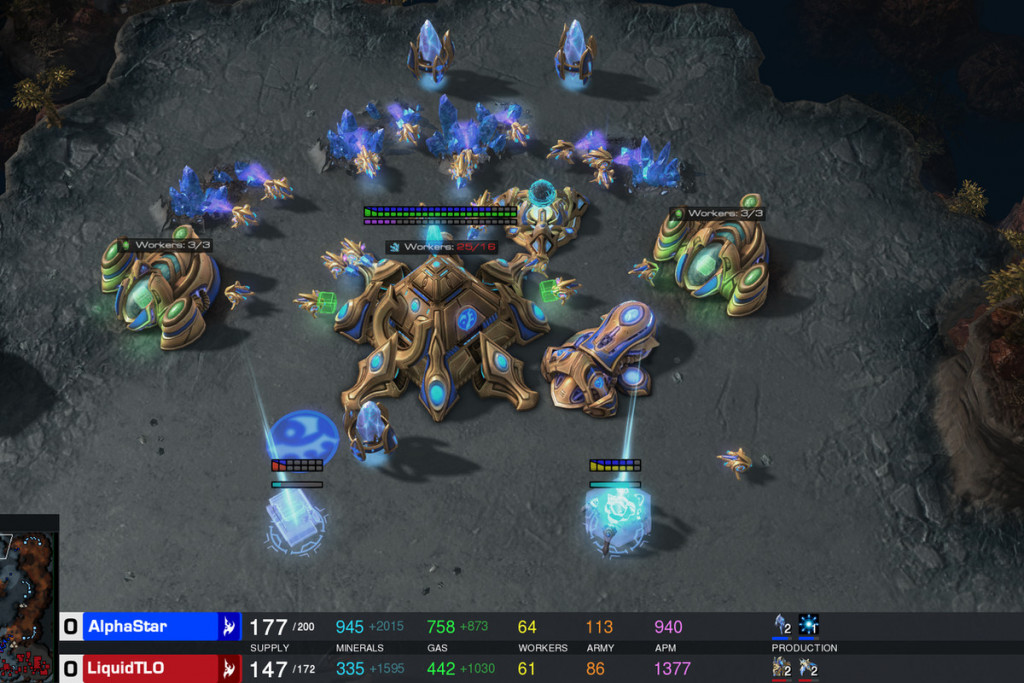 Starcraft is regarded as one of the best real time strategy games of all time and it managed to popularize the genre worldwide. It is set in a futuristic world where humanity is at war with other alien species. The base building and resource management mechanics are simple yet in-depth, making it highly accessible to new players coming into the genre. With that said, here is the list of video games similar to Starcraft that are our recommendations. You can play these games like Starcraft on PS4, Xbox One, Xbox 360, PC, iPhone, Android, mac or even online. 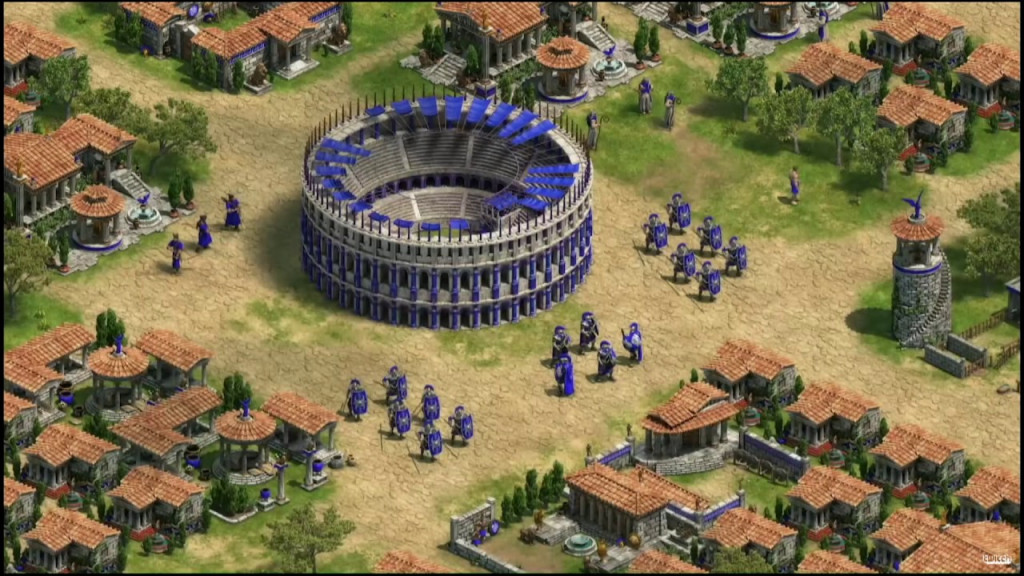 It is extremely hard to find a teenager in modern times who is not familiar with the ‘Age of Empires’ series, a massively popular real time strategy game developed by Ensemble Studios and published by Microsoft Studios back in the year 1997. It found massive popularity due to its addictive gameplay format and historical accuracy. It was one of the most popular titles of its time, having sold over 2 million copies at the end of its 4th year. It also managed to spawn an expansion pack called ‘The Rise of Rome’ that added a lot of new single player content. The main aim of the game is to build a base from scratch by gathering resources and researching tech. You are able to train villagers from your Town Centre, the main hub of your settlement. These villagers then help out with basic tasks such as construction of buildings and gathering resources.

You also have troop production buildings that produce military units like archers and pikemen. You need to assemble your army while building up your base since enemies can attack at all times. As you progress through the game, you gain access to stronger units and buildings. You get the drift! It’s pretty much like any other real time strategy game out there.

However, the game has not aged well and the graphics look really dated. In addition, it gets real tricky to get it running on modern systems, so there’s that. However, Microsoft listened to the pleas of fans and remastered the whole game so that we can relive the experience all over again. I don’t even have the count of the number of hours I put into this game when I was young, so I personally was quite thrilled to be able to play the game again. It contains the expansion pack as well, so you needn’t worry about any external downloads. Also, it manages to stay surprisingly loyal to the original game. If you did not play this game when it first came out and you like playing stuff like ‘Starcraft’, then this is the perfect opportunity for you to relive the experience. 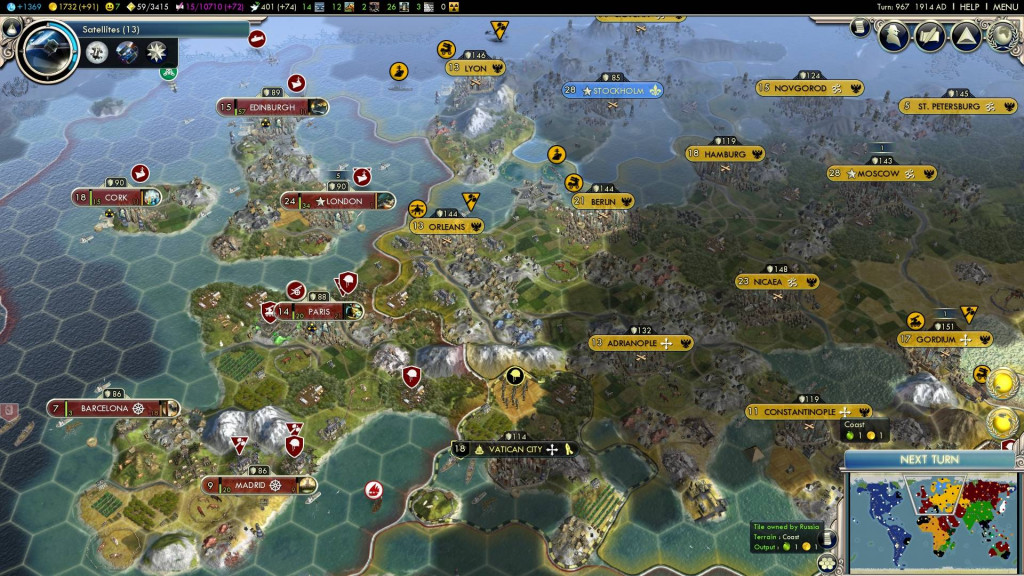 I really like playing strategy games as you can tell from this list and ‘Civilization’ has been a staple for me over the years. I can’t express in words what this series means to me, as it was one of the first games that introduced me to turn based gameplay formats. Frankly, I had no clue how to play the game the first time I got my hands on it, and I used to end up losing every single game. I am not saying that I completely understand the game now and can take down opponents just like that, but I have gotten better with time. It is a turn based strategy game with real time combat developed by Firaxis and published by 2K games for Windows PC, and by Aspyr for OS X and Linux devices.

You start the game in the prehistoric era and then slowly progress through the ages in order to reach modern times. The map is procedurally generated and there are other factions that you need to deal with during the course of the game. It generally takes place in a turn based format where each player gets to move their troops around the map, fortify their structures and set up defences.

If two armies from opposing factions happen to meet, then combat takes place. Now the game shifts to a real time scenario where both players try to manoeuvre their armies in order to gain an advantage over their opponent. This is where the main skill and experience of the player comes into play. There are several tactics that you can utilize to surround your enemy and take them down. Most of them are inspired by historical combat tactics and the game does a remarkable job of emulating the same on your device. This is one game we highly recommend you try out if you like playing stuff like ‘Starcraft’ simply due to its in-depth gameplay mechanics and simulations. 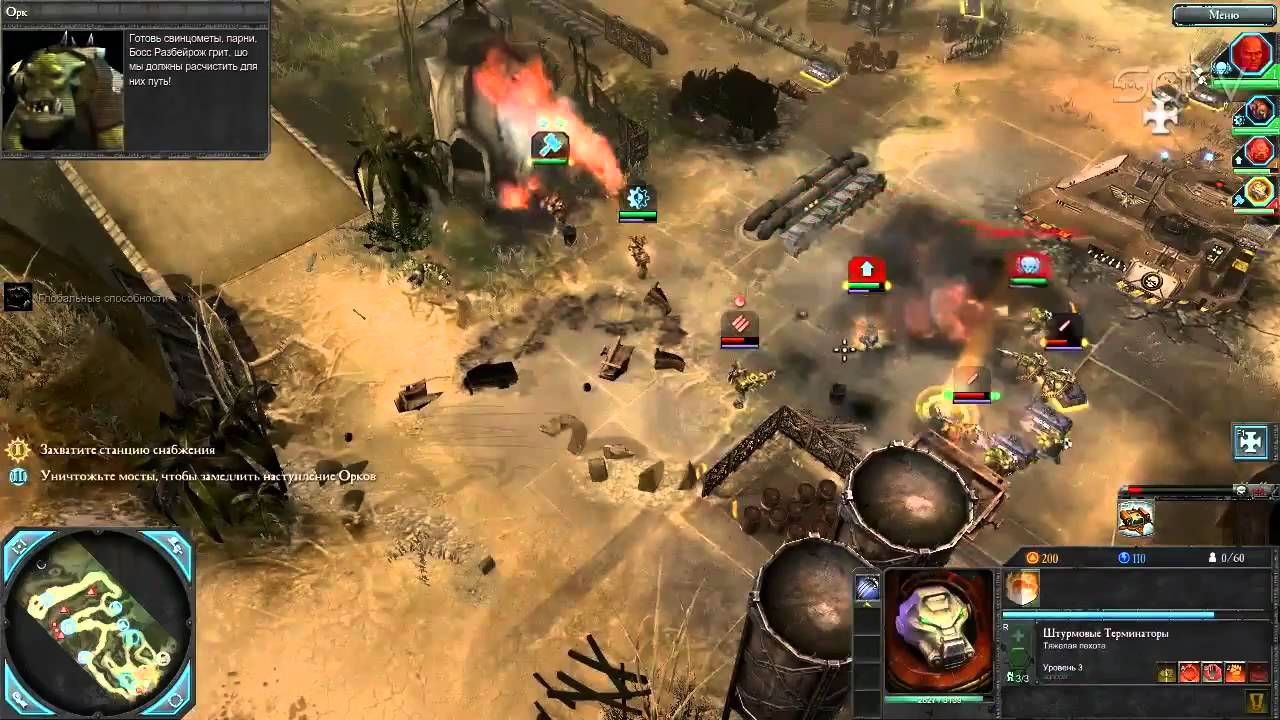 When two massive bodies collide, sparks are bound to fly and each one of these shard resonates and shines in the brilliance that is ‘Warhammer 40000: Dawn of War II’. The game is immaculately structured around the ‘Warhammer’ universe with the story picking up from where the original game left off. It is a real time strategy game with role playing elements and unlike all the other games on this list, focuses a lot less on base building mechanics. Instead, the focus is on troop management and utilizing the abilities of your forces to their maximum extent. Several units make a comeback from the original ‘Dawn of War’ game with a handful of new ones being introduced into the mix.

If you have played any of the ‘Warhammer’ games before, then you will instantly get the feel for this one. The ambiance, the character design, the dialogues all reek of the ‘Starcraft’ universe, so you know you can’t go wrong here. Since you do not need to manage the various aspects of your base, you need to micromanage the hell out of your units. Cover plays a very important role in the overall gameplay scenario and should be used at all times possible.

There are various units in the game that can ignore cover altogether and deal ‘area of effect’ damage, so look out for those. Two expansion packs have been released, named ‘Chaos Rising’ and ‘Retribution’, both of which add new units with the later one introducing a new playable race, the Imperial Guard. Though a more recent instalment to the series named ‘Dawn of War III’ was released in the year 2017, we feel that one should start playing from this one. The original one is a fine title but has really not aged well with time. But this one fits the mix perfectly. We highly recommend this game to fans of ‘Starcraft’ as the gameplay is unique and quite different from all the other entries on this list.

3. Command and Conquer: The Ultimate Collection (2009) 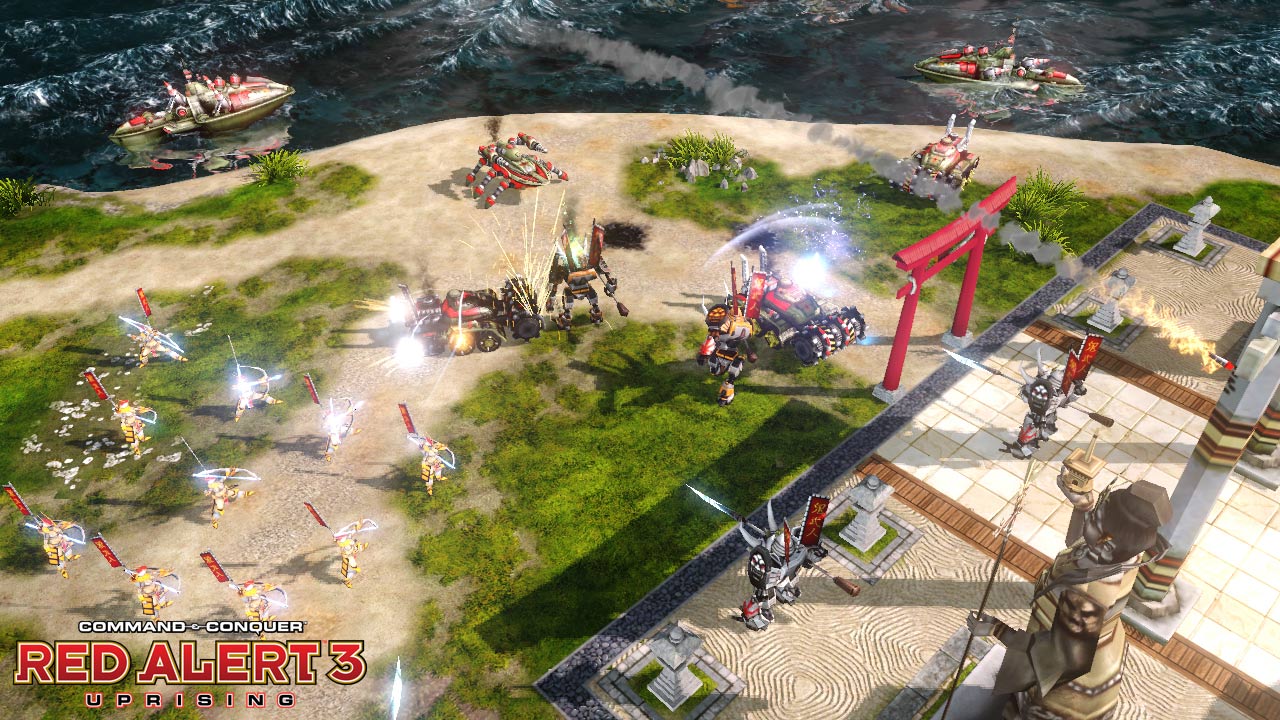 ‘Command and Conquer: The Ultimate Collection’ is here and it contains all the 17 instalments in the series so far! That’s pretty much all I need to say about this entry and it’s sold. It not only contains all the RTS games in the series so far, like the critically acclaimed ‘Red Alert’ series, but also contains ‘Command and Conquer: Renegade’, the only first person experience in the series. It is extremely cheap as well on Origin, considering that you are getting 17 different games for the price of 1, that too, of one of the most respected gaming series of all time.

Now for people who don’t know about the series, ‘Command and Conquer’ is a massively popular real time strategy game very similar to ‘Starcraft’ where you are required to build up your base, produce troops and then effectively manage them to take down your opponent. However, each entry in the series plays a bit differently from the other and explaining all of them is beyond the scope of this article. However, if you have played stuff like ‘Starcraft’ and appreciate the strategic decisions in the gameplay, then you will definitely find your place with this one. My personal favourite is the ‘Red Alert’ series due to its nostalgic campaign that I still play from time to time. The cutscenes in the game are hilarious and completely over the top, something that was quite common in the 90s and the 2000s. If you missed this massively influential title during its heyday, you will not find a better opportunity to catch up ,especially since this makes you a collector from an amateur almost instantaneously. 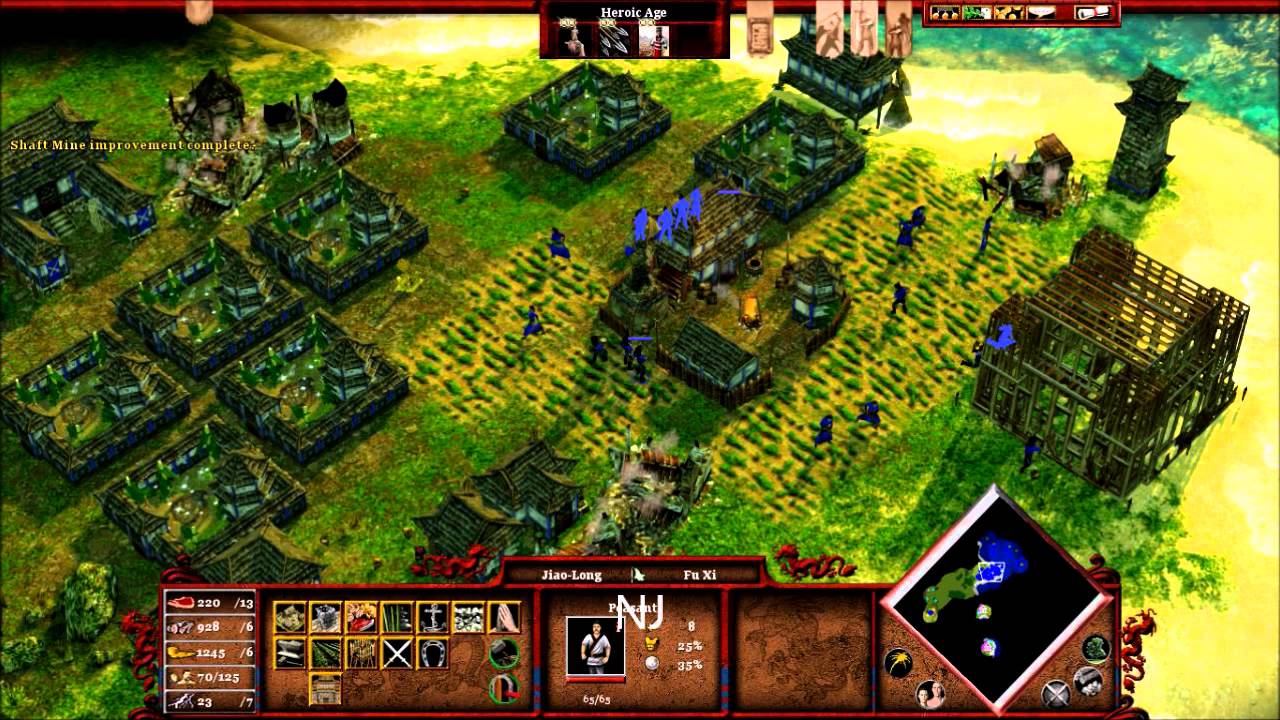 ‘Age of Mythology’ is another staple in the real time strategy genre that can somewhat be called a spin-off of the ‘Age of Empires’ games. It was initially developed by Ensemble Studios using the same game engine as that of ‘Age of Empires II’. It was massively successful, both critically and commercially, having won several ‘Game of the Year’ awards and reaching Platinum at the end of its one year cycle. An expansion pack for the game was released in the following year called ‘The Titans’ that added a new campaign and mechanics. The main game revolves around the story of Arkantos, a hero from Atlantis who takes part in the legendary war against Troy as a part of the Greek army.

Alongside Arkantos fights his trusted brothers and friends, Ajax and Odysseus, both of which are characters from Greek legends. They defeat Troy through their devious plot and then plan to travel back home only to find Poseidon has turned against them. The Cyclops Gargarensis has besieged their hometown and has stolen the statue of Poseidon, a symbol of pride for the Atlanteans. This sets off Arkantos through a path of deceit and ploy to the lands of the Egyptians and the Norse people where he comes face to face with the demigods of the respective lands.

As you can tell, the story borrows heavily from the mythical lore of the regions and if you are a lorehead like me, then you will be instantaneously hooked into the gameplay. However, what most people don’t know is the fact that there is an expansion pack for this game, almost 12 years after the release of the original. ‘Tale of the Dragon’ was co-developed by Forgotten Empires and SkyBox Labs and was published by Microsoft Studios in the year 2015 for Windows PC. This is one game you should definitely try out if you like playing real time strategy games like ‘Starcraft’. 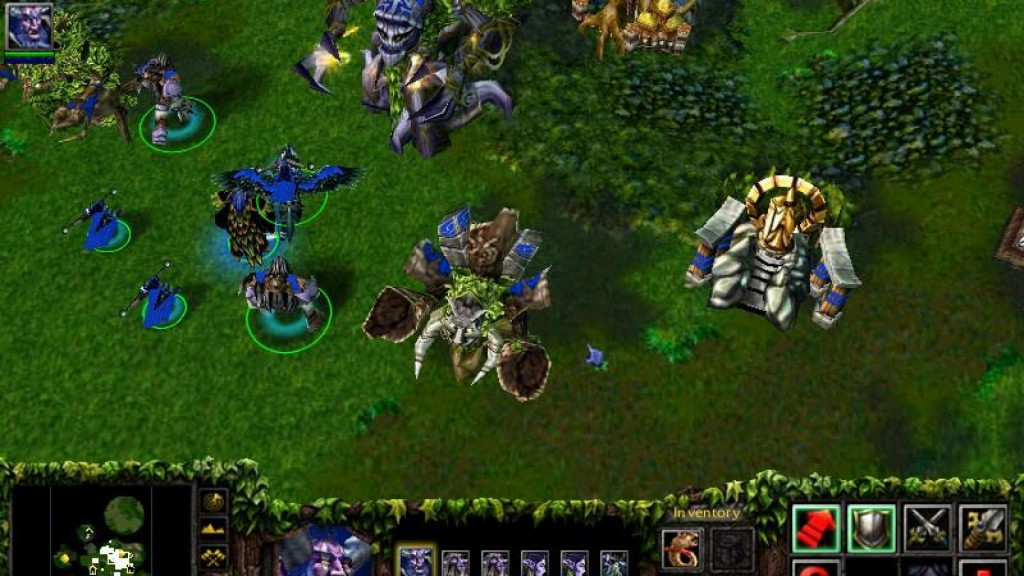 ‘Warcraft III’ is the third instalment in the ‘Warcraft’ series, a string of real time strategy video games developed and published by Blizzard Entertainment. ‘Warcraft’ is one of the titles that helped define the RTS genre, having first made its mark back in the year 1994 with their title ‘Warcraft: Orcs and Humans’. Little did Blizzard know what they were establishing with this title as it turned out to be one of their greatest and most profitable franchises of all time.

‘Warcraft III’ directly follows the events of ‘Warcraft II’ wherein the Orcs have made a place for themselves in the land of Azeroth and are living at par with the humans at relative peace. This is the moment when Thrall gets a vision about an invasion that will test the strength of all the races of Azeroth combined. The demons are returning and this time, they have a plan. Thrall is asked by ‘The Guardian’ to rally the horde and move them west to the lands of Kalimdor, which is where their destiny lies.

The game also introduces two new playable races, The Undead and The Night Elves, along with a bunch of unplayable factions like ‘Murlocs’. An expansion pack was released called ‘The Frozen Throne’ that introduces new gameplay mechanics, new units and a whole new campaign. The storyline, the character development, the cutscenes and the gameplay, all add up to one hell of a memorable experience. So you better not miss out on this one. It is highly recommended, mainly because of the gripping storyline and the epic cutscenes that really do justice to the world of ‘Warcraft’.