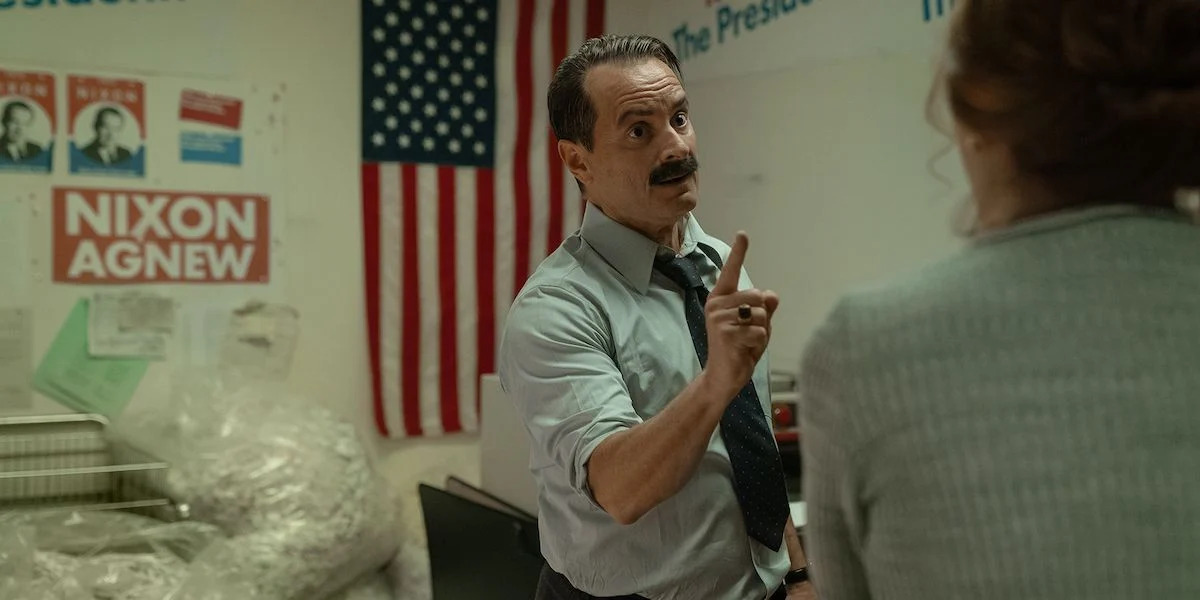 In episode 3 of ‘Gaslit,’ titled ‘King George,’ Martha (Julia Roberts) struggles to free herself from the captivity in California while her husband, John N. Mitchell (Sean Penn), and his associates scramble to cover up their wrongdoings in Washington. The FBI begins its initial investigation of the Watergate Scandal. Meanwhile, the responsibility of getting rid of the evidence ends up on John Dean’s (Dan Stevens) shoulders, who finds himself at the center of the conspiracy by the end of the episode. Here is everything you need to know about the ending of ‘Gaslit’ episode 3. SPOILERS AHEAD.

The episode begins with a flashback. A young Martha complains to her father about her bullies, prompting her father to give her his pocket watch. He claims that the watch was given to their ancestor by King George III of England (hence the title). That conversation apparently left a deep impression on Martha, and she built her future persona on the pretext that her family was royalty and she was a princess. Even after finding out that her father lied to her about the watch, Martha clung to the story because fiction was preferable to reality. It is heavily implied that Martha’s father committed suicide.

In 1972, trapped inside her hotel room, Martha desperately seeks a way to get out. She tries to draw the attention of other people vacationing at the hotel but fails. Although her kidnappers don’t let her watch the news, Martha gets her hands on a newspaper and learns about the Watergate arrests. Realizing that McCord was among the burglars, she calls Winnie McLendon and tells her about her captivity. Peter, one of her captors, cuts the call and then proceeds to accost her physically. During the ensuing struggle, Martha falls on a glass table and gets severely injured. Peter subsequently injects her with a tranquilizer and leaves her unconscious until her family returns.

Meanwhile, Dean finds himself in a trap of his own. His ambition didn’t let him get out of the cover-up when he should have. And now, he is in too deep to leave. Mitchell, Dean, and the others discover that Hunt has a safe in the White House with documents containing extremely sensitive information, and it falls on Dean to destroy those documents.

While this is happening, FBI agents Angelo Lano (Chris Messina) and Paul Magallanes (Carlos Valdes) are tasked to investigate the Watergate burglary. Although they initially think the operation was conducted by a group of highly-trained and highly-intelligent individuals, it doesn’t take them long to find out that Liddy and Hunt are somehow connected to the break-in. This leads them to a different realization: the people they are investigating are actually quite stupid.

When Martha finally wakes up, she discovers that the security agents are gone, and her family has returned. Mitchell claims that he fired both agents after learning what they did to her and resigned from the Nixon administration. While she seems to forgive him for now, the worst is yet to come. The phone call Martha made to Winnie will play a pivotal role in bringing down a presidency, and she will be vilified for it by the administration.

Gaslit Episode 3 Ending: Who Is L. Patrick Gray? Why Does Dean Enlist His Help?

Based on the real-life historical figure of the same name, L. Patrick Gray (John Carroll Lynch) is the acting director of the FBI. After failing to get rid of the documents himself, Dean decides to make someone else do it and zeroes in on Gray. Dean employs the same tools of manipulations that Mitchell and the others used against him to convince Gray that he needs to do this to prove his loyalty to the Nixon administration. They had earlier worked on him, and now they work on Gray. As the episode ends, Gray meticulously burns all of Hunt’s documents. Recruiting Gray serves another purpose. The FBI is already very close to unraveling the mystery. With Gray being part of the conspiracy, he can effectively put a stop to the investigation.

As Dean learns from Liddy, with Mitchell’s departure, he is now virtually in charge of the entire conspiracy. His future actions will dictate whether the Nixon administration survives the oncoming storm or falls apart. Dean seems to think that making Gray part of the conspiracy will stop the investigations. He is likely right about this. However, he should be more worried about the media. The real demand for truth will come from there and not law enforcement.