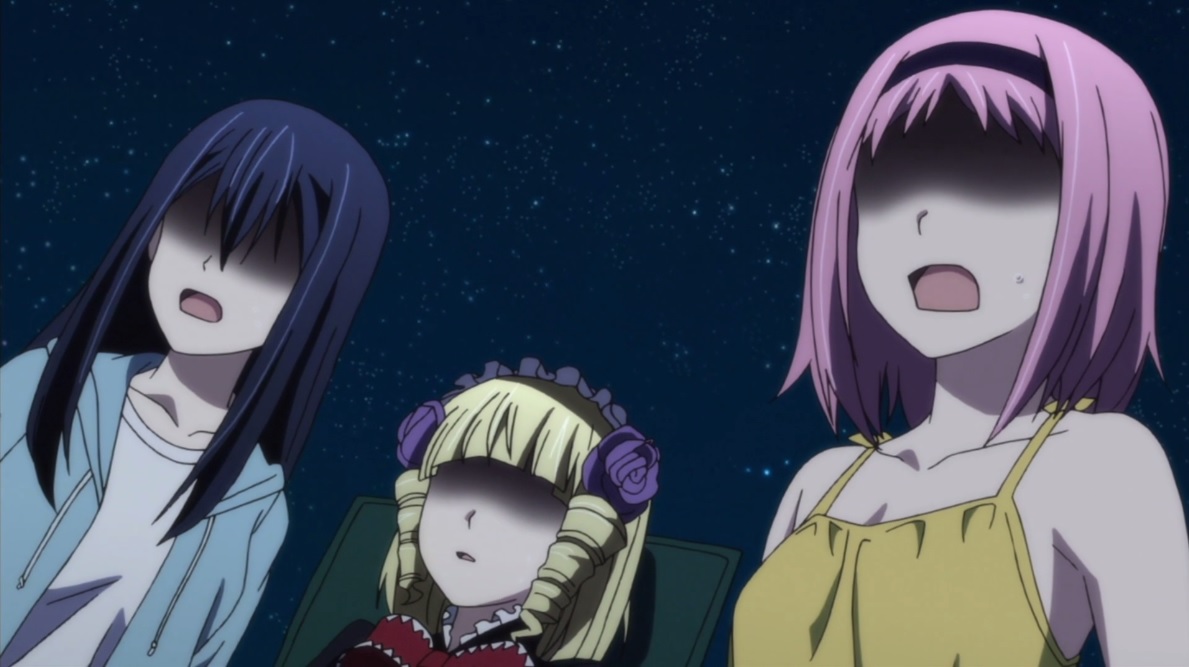 ‘Gokukoku no Brynhildr’, also known as ‘Brynhildr in the Darkness’, is often ridiculed because many people claim that the anime is very similar to ‘Elfen Lied‘. Now I totally get it. The two have quite a few similarities and has been created by the same manga writer. While I do understand the sentiments behind the intentions of the two audiences, I don’t see the need for comparison, as for me, both the shows have stand-alone stories that make them special. And as much as I love ‘Elfen Lied’, I would never say that it is far more superior to ‘Gokukoku no Brynhildr’ in any way.

Harem and Sci-fi are not the kind of genres that gel too well with each other. One reason behind this is the fact that both of them have a different set of target audiences. Many shows that have attempted to do so failed to portray a sensible story that balances out elements of both. Though a very weird combination, ‘Gokukoku no Brynhildr’ somehow makes the whole idea work and presents a story that will completely blow off all your expectations. Apart from its captivating mysterious story, even the characters get enough development in its short runtime of just 13 episodes. And though there is some fan service as well, most of it is actually quite hilarious.

Overall, I really expected ‘Gokukoku no Brynhildr’ to grow on viewers with time but that never really happened. With over 100 chapters in its source material, I was also expecting the show to go on for a much longer time. But strangely, we haven’t heard much about it since the release of its season 1. If you’re one of those few people who are still interested in knowing about the show’s future, then you probably don’t want to miss out on the news that we have for you in the next section.

Gokukoku no Brynhildr Season 2 Release Date: When will it premiere?

‘Gokukoku no Brynhildr’ Season 1 premiered on April 6, 2014 and came to an end on June 29, 2014. During this span, it aired a total of 13 episodes with each one of them being 23 minutes long. It became really popular soon after its release and even now, some fans keep talking about it. But it was not so well received by most manga readers. Apparently, the volumes adapted by the anime had a lot more content than what we got to see in the show. So just to shorten its runtime, the creators decided to snap out pieces of the manga.

While I do understand that they have their own budget and time constraints in this season, that could’ve had a lot more episodes, later suffered and received a lot of negative reviews. For obvious reasons, this had an impact on its overall sales as well. It has only been 5 years since its release, which is not really long time, considering the fact that many anime get sequels even after a decade. But the buzz around it seems to be fading away and sooner or later, this anime will be forgotten. Even then, if there is any news regarding ‘Gokukoku no Brynhildrr’ Season 2 release date, we will update it here in this section.

You can watch ‘Gokukoku no Brynhildr’ on Crunchyroll with its original Japanese audio and English subtitles.

Ten years before the event of the show, two best friends named Ryouta Murakami and Kuroneko embark on a dangerous journey to hunt down alien life. But an unforeseeable accident kills Kuroneko and badly injures Ryouta. In the present time, Ryouta still keeps thinking about the incident and every night, he looks up at the sky wondering if his friend was right about the existence of the extraterrestrial.

One fine day, a new student named Kuroha Neko joins the same school as Ryouta and turns his world upside down. Kuroha strongly resembles his deceased friend Kuroneko and no matter how hard he tries to get talk to her, she simply denies being his friend or even being related to him in any way. Things get stranger when Kuroha, who had aced the school’s entrance test, is not even able to solve simple Maths problems and shows inhuman feats of strength from time to time. She is also able to predict the death of those around her.

Then there comes a time when Kuroha uses her supernatural strength to save Ryouta’s life and without even knowing it, he then becomes a part of who she truly is. He soon discovers the truth about her past and also unravels many mysteries of the universe. His scientific mind now gets filled with various new ideas and concepts that are unknown to all normal humans. He must now accept Kuroha for who she is and protect her from all the forces who would do anything to get hold of her immense power.

Neko Kuroha is the main protagonist of the series who is also a B-rank Magician. She is the Vice President of the Astronomy Club of the Academy and is also Ryouta’s main love interest. She is known to be really beautiful with dark blue hair and violet eyes. In the beginning, she pretended to be really cold and expressionless. But she is actually very cheerful and also extremely clueless about her own life as she often loses her memories when she uses her powers. When she’s alone, she sings to herself and thinks about all the times she helped people. Around people, she is reserved and does not speak unless she is spoken to.

Ryouta Murakami is the main lead protagonist of the show who has blond hair and brown eyes. He is very smart and uses various strategies to help witches survive. He really wants to live a very normal high school life but the memories of his childhood keep coming back to haunt him. Ryouta lives with his single mother and does a lot of housework to help her. The tragic events of his childhood remain with him for a very long time and later impact his social life as well.

Kazumi is another witch whose research number is 2670 and is also a member of the Astronomy Club. She looks a little younger than her actual age and has short pink hair with blue eyes. After years of imprisonment and aloofness, she seems to suffer from various psychological disorders. She initially acts really selfish and only thinks about her own survival. But later, after getting warmer with the members of the club, she softens up and starts thinking about everyone around her. She portrays a very strong interior but deep inside, she is trying to deal with all the emotions that keep haunting her all the time.

Kana Tachibana is also a B-ranked Magician and is the current mascot of the astronomy club. She has long blond hair and is often seen in a gothic lolita dress. She is kind to those around her and is always willing to do anything for her friends. But she can be very rude to the ones who are not too close to her and gets really mouthy when confronted. She is also able to judge the true character of others around her. She can see the future but this power is only limited to being able to see the most brutal deaths that will occur in the near future.

Kotori Takatori is another magician who is a member of the Astronomy Club. She used to stay with her friend Chie and when the two ran out of medicine, Chie had sacrificed her own life just to make sure that Kotori lives a little longer to celebrate another birthday. She seems to be a little rude when she joins the Astronomy Club. But later, she becomes very kind to everyone and always tries to make others smile. She is timid and gets embarrassed very easily but that does not stop her from being friendly to others. She really cares for the people who are close to her and would even be willing to give up on her own life for them.

Read More in Anime Previews: Waiting for the Summer | Pokemon