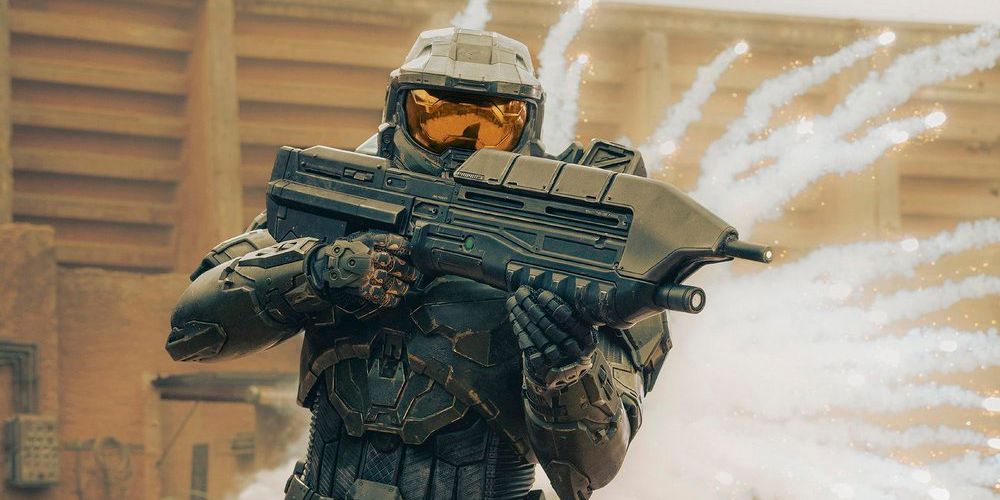 ‘Halo’ is a science fiction military series that revolves around an epic space-faring conflict between humanity and the alien theocratic empire known as Covenant. Amidst the conflict, two unlikely people forge a partnership as they try to uncover the goals of the Covenant while fighting for their own survival. The series is based on the globally renowned video game series of the same name and was developed for television by Kyle Killen and Steven Kane.

In the series premiere episode, viewers get to meet Master Chief Petty Officer John-117, a member of the advanced military super-soldiers, Spartans. On a mission to the planet Madrigal, John meets the teenager Kwan and discovers an alien sentient object with mysterious properties. The episode ends without giving a clear answer about the fates of John and Kwan but firmly establishes the overarching mythology of the series. Thus, if you seek some clarification about the episode’s ending, here’s everything you need to know! SPOILERS AHEAD!

The first episode of ‘Halo’ is titled ‘Contact,’ and it opens on the distant planet of Madrigal, which is in conflict with the United Nations Space Command (UNSC) over its demand for freedom from Earth. General Ha and his followers reside at an outpost on the planet and are dedicated to fighting against the UNSC’s perceived colonization of their land. Ha’s daughter, Kwan, wanders to the outskirts of the outpost with her friends only to run into an alien spaceship. She flees while the aliens kill her friends.

After reaching the outpost, Kwan warns her father and the other soldiers about the alien invasion. The aliens attack the outpost while General Ha and his army bravely defend their home. Kwan hides in a bunker with other civilians, but the tide of the battle is in favor of the aliens. Soon, super-soldiers of UNSC’s Spartan-II program intervene and fight against the aliens. Although the Spartans — led by Master Chief Petty Officer John-117/Spartan-117 — defeat the aliens, all the outpost residents except Kwan are killed.

The Spartans leave Kwan and head to investigate the cave where the aliens were conducting an excavation. John encounters a mysterious alien artifact and experiences a vision of his childhood after touching it. The Spartans collect the object and prepare to return to the UNSC Headquarters on Planet Reach. On Reach, Dr. Catherine Elizabeth Halsey is anticipating the return of her soldiers and wishes to study the object. However, her superior, Admiral Margaret Parangosky, is unhappy with Hasley’s handling of the recent mission.

On route to Planet Reach, Miranda Keyes tries to convince Kwan to speak publically in favor of the UNSC’s actions on Madrigal. However, when Kwan refuses, the UNSC cites Article 72, leading to orders of Kwan’s extermination. Elsewhere, Mercy, a high-ranking alien within the Covenant, converses with Makee, a human able to track down the objects like the one discovered by John. Onboard his ship, John receives the orders to kill Kwan.

Halo Episode 1 Ending: Does Kwan Die? Does Master Chief Save Her?

In the episode’s final moments, it becomes evident that John/Master Chief’s interaction with the alien object has seemingly undone the programming of his mind. As a part of the Spartan-II program, John has been vigorously trained as a killing machine and never disobeys orders. Therefore, it is surprising that despite having orders to kill Kwan, John has a conversation with the teenager and avoids killing her. John then puts his plan of taking over the ship’s control.

The ship transporting John and Kwan is under the control of the UNSC. However, John knows how to disable the autopilot and bring the ship into manual mode. Nonetheless, he faces a challenge in executing his plan before the ship lands on Planet Reach. Admiral Margaret Parangosky is unhappy with John’s actions and instructs her commanders and Hasley to take down John. John is one of the UNSC’s most valuable military assets. Therefore, John going rouge poses a big threat to the organization.

On the other hand, John is unable to execute his plan by himself and asks for Kwan’s help. To convince her that he is saving her, John reveals his face to Kwan. The two work together to bypass the control system and take over the ship. As the ship arrives at the landing docket, the odds are overwhelmingly against John and Kwan. However, Hasley has instructed the Silver Team to protect John.

In the end, John ends up triggering the alien object, which defeats the UNSC forces in one move. Thus, John and Kwan get the opportunity to flee from Planet Reach. The episode ends with the duo heading out in outer space with the alien object known as Halo Ring in their possession. Thus, the duo’s fate puts them right in the middle of the Human-Covenant conflict that will be explored in forthcoming episodes.

Read More: When and Where Is Halo Set?