How Did Pam and Tommy Meet? Why Did They Break up? 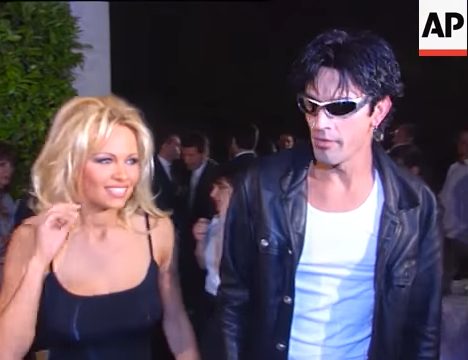 ‘Pam & Tommy’ brings vivid recreations of the whirlwind 1990s romance between the actress of ‘Baywatch’ fame, Pamela Anderson, and Mötley Crüe drummer, Tommy Lee. The fact that their relationship, and the sex tape it spawned, remain iconic in pop culture history is a testament to just how deeply Pamela and Tommy’s relationship captured the world’s imagination. The show attempts to depict many instances accurately but also takes artistic license with the narrative. Curious about how things really went down? Let’s take a look at Pamela and Tommy’s romance.

How Did Pamela and Tommy Meet?

A little bit of background first. In 1992, Pamela Anderson began appearing on ‘Baywatch’ as the iconic C.J. Parker, which made her a globally recognized figure. Meanwhile, Mötley Crüe’s fifth album (‘Dr. Feelgood’) had opened at the top of the billboards in 1989, and the band was riding a wave of success. The band’s drummer, Tommy Lee, who was previously married to Elaine Starchuk and Heather Locklear, was well-known for his “bad boy” image, which was also reflected in the band’s famously decadent lifestyle.

The two reportedly met for the first time at a club on New Year’s Eve of 1995, and Tommy promptly licked Pamela from her chin to her temple (depicted on the series as well). Then, in February 1995, the rockstar arrived uninvited to a photoshoot Pamela was doing in Cancun, Mexico. After three days, Tommy proposed, and Pamela accepted. Their famous white bikini and shorts clad wedding took place the next day, on February 19, 1995.

It was the then 27-year-old actress’ first marriage and the 32-year-old rockstar’s third. Instead of wedding rings, Tommy revealed that they got tattoos of each others’ names around their fingers. In 1998, while talking about the early days of their relationship, Pamela described how she and Tommy shared an intense relationship because they were both “kids” who were madly in love and passionate about life.

Why Did Pamela and Tommy Break Up?

Unfortunately, it seems like the seeds of tumultuous future events were being sown even as the couple enjoyed their new romance. In the summer of 1995, they visited Lake Mead for their honeymoon, which is when the (now) well-known 54-minute private video was shot. In October 1995, their vengeful electrician Rand Gauthier stole a safe from their home which contained the tape. When the couple finally realized the safe had been stolen (in January 1996), they filed a police complaint. In March, they filed an eventually unsuccessful $10-million civil suit against Penthouse magazine for publishing images of the video.

Years later, the actress revealed that not being able to do anything to contain the spread of the tape added a lot of stress and frustration to their relationship. She also loathed giving repeated and detailed depositions about her private life, which were part of the court procedures the couple initiated to try and contain their private video. Pamela filed for divorce for the first time in November 1996 but didn’t go through with it after the couple patched things up. In February 1998, however, Tommy was arrested after Pamela alleged that he struck her while she was holding their infant son. She filed for divorce soon after.

Later the same year, Tommy was sentenced to six months in prison. When he was released, the couple quickly got back together, claiming they were trying to reunite their family. However, by the next year (2000), they were reportedly battling for custody of their sons in court once again. Finally, in 2001, Pamela began dating Kid Rock and got married — and divorced — in 2006.

Pamela and Tommy seem to have an enduring connection that keeps bringing them back together. In 2005, at Pamela Anderson’s Comedy Central Roast, Tommy said that the two had shared one of “history’s greatest romances.” The former couple has broken up and gotten back together multiple times, including once in 2008 when Tommy joyfully revealed that Pamela and their sons had moved in with him. Sadly, sometime in 2010, they broke up again. In the following years, the couple has gotten married to different people but still seem to keep in touch and were last seen together in 2021 when they came together to support the launch of their son Brandon’s new fashion line.

Read More: What is the Website Rand Uses to Sell Pam and Tammy’s Sex Tapes? Is it Real?