Is Labatt a Real Company? Did it Discover Pamela Anderson? What is the Blue Zone Girl?

Hulu’s ‘Pam & Tommy’ follows the tumultuous story of the titular celebrity couple and how their life gets turned upside down when a private recording gets stolen from their home. The narrative approaches the fateful incident from a number of angles, introducing a variety of characters that play a role in — or are otherwise affected by — the spread of the explosive tape.

Episode 6 takes us to Pamela’s younger days and the chance encounter that ends up with her getting discovered as a model. The way the show depicts Pamela’s debut is quite remarkable, with her getting discovered at a football game by a company called Labatt. So just how much does ‘Pam & Tommy’ get right about this significant event? If you’re wondering how the real Pamela Anderson was actually discovered, we’ve got the story!

Is Labatt a Real Company?

Let’s start with the company that (according to the show) became Pamela’s gateway to stardom. On ‘Pam & Tommy,’ a marketing executive from Labatt’s Beer approaches Pamela at a football game, telling her to get in touch with him if she’s interested in modeling.

Labatt is a real company that’s been around since 1847. The Canadian headquartered brewing company is widely known for its range of beers and is seemingly located across four major regions of Canada — Western Region, Ontario, Québec, and the Atlantic Region. Presently, Labatt is part of the Belgian multinational drink and brewing company Anheuser-Busch InBev.

Around 1989, a 22-year-old Pamela Anderson was, in fact, spotted on the screen at a B.C. Lions football game in Vancouver, sporting a Labatt’s Beer t-shirt. According to reports, the company subsequently hired her as their spokesmodel. So what’s all that “Blue Zone Girl” fuss about?

What is the Blue Zone Girl?

Labatt’s pilsner lager, introduced around 1951, eventually became one of Canada’s highest-selling beers. Known as “Blue” for the color of its label, the beer further strengthened its association with the color by reportedly sponsoring sports teams like the Winnipeg Blue Bombers. Eventually, the company started a marketing campaign called the “Blue Zone.” 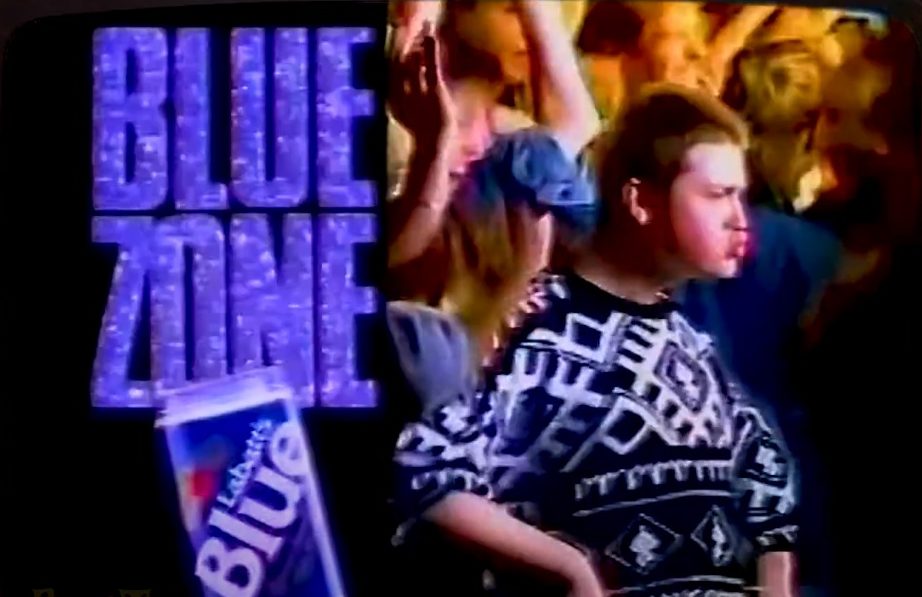 In a 1992 documentary, Anderson revealed that one of her roommates in Vancouver was a Blue Zone representative. The free marketing materials and Blue Zone branded clothing, quite hip at the time, were often sported by the future celebrity and her friends in their younger days. It was on one such day while sporting a Labatt’s Blue Zone t-shirt that Anderson was spotted by the cameraman at the B.C. Lions football game and shown on screen.

Soon enough, the company was reportedly flooded with queries about who the “Blue Zone Girl” was. In response, Labatt hired Anderson as a spokesmodel, and she did a few commercials for the beer company. The famous Blue Zone Girl poster (also depicted in the series) was apparently the idea of her boyfriend at the time, who capitalized on her fame and produced the now-memorable image.

Soon after she began appearing in Labatt’s commercials, Anderson got a call from Playboy magazine and subsequently moved to Los Angeles. The rest, as they say, is (Hollywood) history. So was Labatt actually responsible for the iconic model being discovered?

Well, yes and no. It appears Anderson was already an aspiring model (and fitness trainer) before she was hired by Labatt. Thus, being hired by the brewing company was not the first time she considered being a model (as the show seems to depict, possibly for dramatic effect). However, the fact that she was wearing a Labatt’s Blue Zone t-shirt seemingly added to Anderson’s appeal and resulted in the catchy “Blue Zone Girl” moniker. Also, from the way events are described, it appears that Labatt hired Anderson due to overwhelming demand from the public to see her again.

Thus, Labatt possibly gave Anderson her first “big” modeling gig and the platform to be subsequently spotted by Playboy magazine. However, credit for discovering her potential to be a model can arguably be shared between the crowds that demanded to see more of her and even the cameraman who spotted her at that football game in Vancouver and plastered her image on the stadium’s Jumbotron.

Read More: Who Plays Jay Leno in Pam & Tommy? Did the Interview Happen in Real Life?