Who Plays Jay Leno in Pam & Tommy? Did the Interview Happen in Real Life?

‘Pam & Tommy’ starts with a romance, and the initial episodes follow a whirlwind affair between the titular celebrity couple. However, the show’s opening shot gives us a brief but potent clue about the tense times ahead. A vintage television set shows Pamela trying to smile through an interview with late-night talk show host Jay Leno, who quips away about the “tape,” making jokes at the actress’ expense.

In keeping with the show’s delightfully 1990s aesthetic, the popular talk show and its iconic, long-running former host are recreated to a startling degree. Some might briefly mistake it for archival footage of an actual interview. So how did the show recreate Jay Leno and the show so convincingly? And did such an interview actually happen? Let’s get a handle on what’s fact and what is fiction.

Based on a 2014 Rolling Stone article by Amanda Chicago Lewis, ‘Pam & Tommy’ introduces a remarkable host of characters based on 1990s versions of real people. This includes, of course, Pamela Anderson (Lily James) and Tommy Lee (Sebastian Stan) but also members of the Mötley Crüe and even slightly lesser-known individuals like Rand Gauthier and Seth Warshavsky. 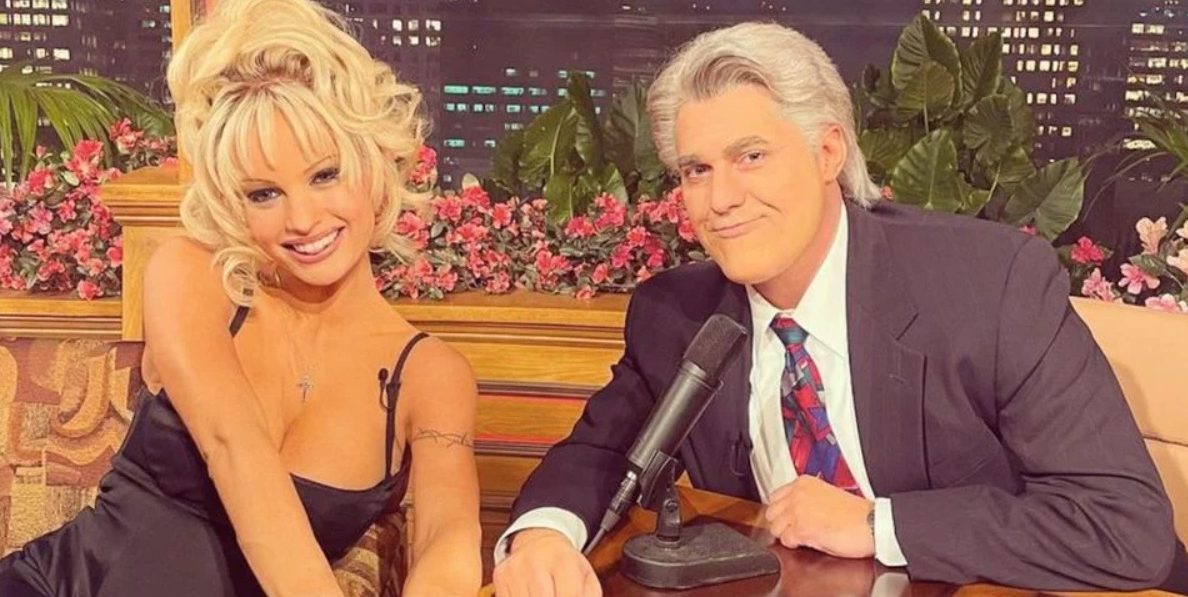 The likeness of Jay Leno is lent to the show by actor and comedian Adam Ray. Of course, a few facial prosthetics also seem to be involved in completing the remarkable transition. The show does seem to have an affinity for prosthetics, with Lily James and Sebastian Stan both sporting some interesting add-ons as well. However, credit for the spot-on mannerisms mimicking the talk show host that people watched for the better part of two decades all goes to Ray. In fact, the prolific voice actor, who’s lent his talents to shows like ‘Rick and Morty,’ ‘American Dad!’ and many others, shared a behind-the-scenes look at his transformation.

Did the Jay Leno Interview Happen in Real Life?

As authentic as the recreation looks, it doesn’t seem to be the exact restaging of a specific interview between Jay Leno and Pamela Anderson. The former hosted NBC’s ‘The Tonight Show with Jay Leno’ from 1992 to 2009, and following a brief gap, till 2014. Over the long run, Anderson was actually a guest multiple times on the show. Her attire on the recreated opening clip in ‘Pam & Tommy’ seemingly matches a 1996 interview with Leno, though the real-life version doesn’t appear to focus so blatantly on the infamous leaked tape.

From the few excerpts of their interviews still available, it appears that the subject of the tape was often not too far from the conversation in subsequent interviews. As depicted on the show, in the actual interviews, most mentions or allusions to the tape by the host were sidestepped goodnaturedly. In one particular interview (seemingly from 1999), Anderson even hinted that she expected Leno to bring up the subject of the tape. However, things remained amicable enough.

The recreated clip of the talk show from ‘Pam & Tommy’ appears to be a fictionalized version of the real 1996 interview. In the recreation, the mention of the tape seems to be exaggerated to underscore how the media handled the whole affair and the intense spotlight that Anderson found herself in at the time. Of course, there are still some parts of real-life Pamela Anderson and Jay Leno interviews that don’t seem to be available anymore, so the actual conversation could have occurred. However, given how blatant and repeated the mention of the tape is in the ‘Pam & Tommy’ version, it is unlikely the real-life version was as abrasive.