Is The Girl From Plainville on Netflix, HBO Max, Hulu, or Prime? 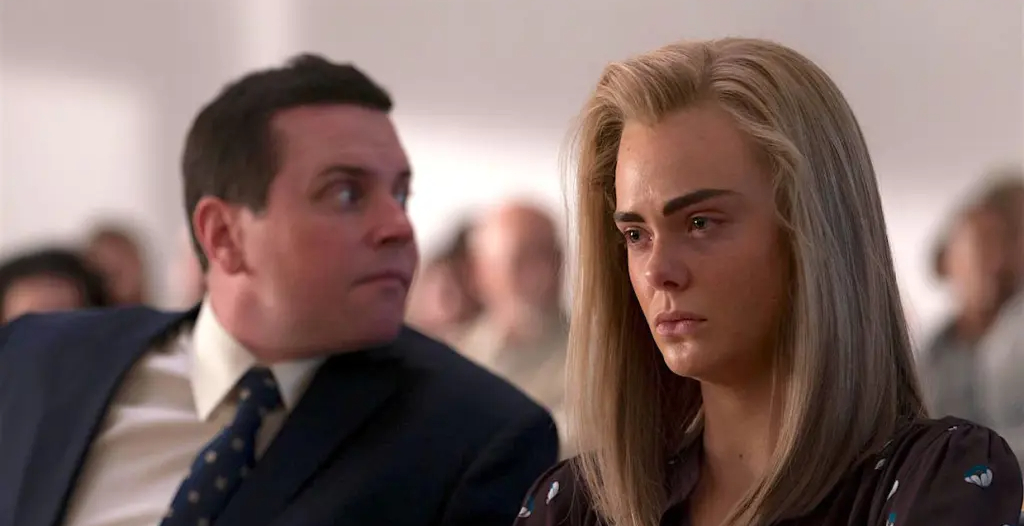 Created by Liz Hannah & Patrick Macmanus, ‘The Girl From Plainville’ is a true-crime series based on the real-life events surrounding Conrad Roy and Michelle Carter. In July of 2014, Conrad, also known as Coco, dies by suicide at the age of 18. His girlfriend Michelle is called to court to face charges of involuntary manslaughter, given that she had encouraged Conrad to end his life. The trial gains the limelight in national media for its unique nature and gets people wondering whether telling someone to kill themselves is truly a crime or not.

The series has gained critical acclaim for the dramatized portrayal of the events surrounding the students from Massachusetts. Actors involved in the crime series include Elle Fanning, Colton Ryan, Chloë Sevigny, Norbert Leo Butz, Cara Buono, and Kai Lennox. We are sure you are excited to know more about this series and how to watch it. Don’t worry because we have just the information you need.

What is The Girl From Plainville About?

Conrad Roy, an 18-year old student from Massachusetts with a great academic and sports record, dies by suicide by suffocating himself in his truck. The only clues left behind by Conrad that might provide the reasons for his actions are two suicide notes, one for his father and one for a girl named Michelle Carter. Conrad’s family does not know who the girl is but Michelle soon rectifies that by introducing herself to them and expressing her remorse at the death of Conrad AKA Coco.

A few years ago, Conrad and Michelle had met in Florida while visiting their relatives and decided to remain in touch over the phone and the internet. The two start dating mostly virtually, meeting only a few times over the course of their relationship. In the present, the investigators find the text exchange between Conrad and Michelle where the latter is egging Conrad to end his life. The girl from the town of Plainville is brought in by law enforcement to face charges of involuntary manslaughter. If you too are eager to know how this unusual case unfolds, here is how you can watch the miniseries.

Is The Girl from Plainville on Netflix?

No, ‘The Girl from Plainville’ is not available on Netflix. The streamer’s vast offerings do include the popular show ‘13 Reasons Why.’ The Netflix fictional crime drama is set after the suicide of Hannah Baker and follows the fallout from the cassette tapes she left behind. Otherwise, you can watch the real-life story of 16-year-old Cyntoia Brown’s conviction for murder and the convoluted circumstances around the crime in ‘Murder to Mercy: The Cyntoia Brown Story.’

Is The Girl from Plainville on Hulu?

‘The Girl from Plainville’ is indeed available on Hulu. You can watch the miniseries right here!

Is The Girl from Plainville on Amazon Prime?

Unfortunately, Amazon Prime is not the place for those looking forward to watching ‘The Girl From Plainville.’ Prime users can instead opt for ‘The House of Suh.’ The true-crime documentary features the Korean-American Suh family and how Andrew Suh, a model son, murdered his sister’s fiancé at the soon-to-be bride’s behest. For a more high-profile case, you can watch ‘Pistorius.’ It revolves around the South African Paralympic champion Oscar Pistorius and how he murdered his girlfriend, Reeva Steenkamp.

Is The Girl from Plainville on HBO Max?

While HBO Max does not have ‘The Girl From Plainville,’ it does feature the story of Conrad Roy and Michelle Carter in the two-part documentary ‘I Love You, Now Die: The Commonwealth Vs. Michelle Carter.’ The platform hosts the story of another real-life teenage relationship that ended in death in the docuseries ‘The Case Against Adnan Syed.’ It narrates the tale of the murder of high school student Hae Min Lee at the hands of her ex-boyfriend Adnan Syed.

Where to Watch The Girl from Plainville Online?

‘The Girl from Plainville’ is exclusively available on Hulu and you can watch it here.

How to Stream The Girl from Plainville for Free?

Hulu offers a 30-day free trial to new subscribers, which you can use to watch ‘The Girl from Plainville’ for free. We request our readers not to use any illegal means to watch or download their favorite shows and show support to the creators by paying for relevant subscriptions.

Read More: Where is The Girl from Plainville Filmed?