Is the Navarro Cartel Real? Is Omar Navarro Based on a Real Person?

‘Ozark‘ follows Marty Byrde, the financial advisor of the infamous Navarro Cartel, as he tries to grow the legitimate face of the empire. All the while, Marty launders copious quantities of money for his “employers,” making increasingly intricate schemes to avoid getting caught. The cold efficiency and brutal violence of the shadowy crime syndicate form the dark backdrop of the show and give it an authentically stark feel. Are you wondering whether the Navarro Cartel and its leader, Omar Navarro, are inspired by real-world counterparts? Let’s take a closer look at the criminal elements depicted in ‘Ozark.’

Is the Navarro Cartel Real?

No, the Navarro Cartel is not real. It is part of the bigger world of ‘Ozark’ created by Bill Dubuque and Mark Williams. In the narrative, the Navarro Cartel is an internationally notorious syndicate of drug traffickers that the protagonist, Marty Byrde, launders money for. Since much of the show focuses on the flow of money, the cartel, too, is introduced by the copious sums of cash that Marty deals with. It is also swiftly made clear just how dangerous the Navarro Cartel is.

The Navarro Cartel’s ominous power looms over the show, and most of the organization’s functioning remains relatively unknown. The cartel’s reach is what largely keeps Marty “untouchable” and allows him to deal with a colorful variety of criminals. Despite the Navarro Cartel being a fictional syndicate, it is likely inspired by a myriad of real-life cartels, particularly those from Mexico.

The cartel in ‘Ozark’ is described as one of the most powerful in Mexico, and one that has international infamy. The brutal gang wars, complex logistics systems, and general notoriety of the cartel as seen on the show make it appear to be close in scale to some of the biggest cartels in the world. The Sinaloa Cartel, which has a brutal history in Mexico that features the kind of gang wars featured in season 3, could be one of the real-life inspirations of the Navarro Cartel.

Is Omar Navarro Based on a Real Person?

The Navarro Cartel’s shadowy head, who operates from Mexico and remains largely unseen until season 3, is Omar Navarro. A cunning and ruthless boss, his orders are curt, direct, and always accompanied by the unsaid threat of a gruesome death if he is disappointed. The enigmatic character is, however, fictional. Much like the cartel he heads, Omar Navarro is part of the bigger story of ‘Ozark’ and is not a real gangster. 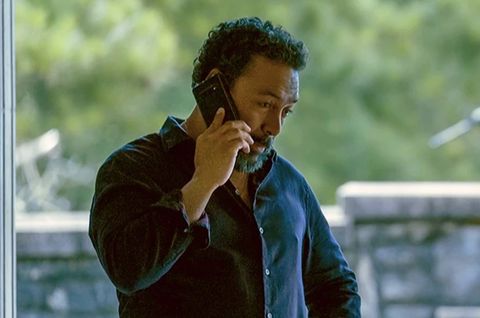 However, the cartel leader also likely draws from multiple real-life characters, many of whom are depicted in varying degrees of authenticity on shows like ‘Narcos: Mexico.’ Much of the intrigue of ‘Ozark’ comes from the functioning of the relatively “normal” Byrde family as they deal with the cartel. This unlikely setup is contrasted by the relatively more authentically depicted Mexican cartel, which has real-world roots. As outrageous as the fictional Omar Navarro’s antics are on the show, reality isn’t far behind. In case you’re curious, Rafael Caro-Quintero seems to be as notorious as the cartel leader depicted in ‘Ozark, though there are many other examples that could have inspired the boss.