Is Twenties Based on a True Story?

BET’s ‘Twenties’ is a comedy-drama that sees three best friends taking on the chaotic and charismatic world of Los Angeles. Hattie, Marie, and Nia, all in their twenties, deal with their dreams and desires in the City of Angels. Created by Emmy Award-winning Lena Waithe (‘Master of None,’ ‘The Chi‘), ‘Twenties’ isn’t afraid to play with and break binaries pertaining to sexuality and ambition.

The show stars Jonica T. Gibbs, Gabrielle Graham, Christina Elmore, Big Sean, and Sophina Brown in pivotal roles. Since its inception in March 2020, ‘Twenties’ has been lauded for its humorous-yet-insightful representation of diverse black identities. The show seems to be a step in the right direction in narrativizing real stories from real communities in America.

With a queer character, Hattie, at its helm, the show redefines what it means to have a black woman on-screen. Although it has received some criticism for occasionally employing the very stereotypes it tries to avoid, the show has garnered fantastic reviews and is well-loved by its fans for its realistic portrayal of black people and their experiences. Naturally, this brings to mind the question: is ‘Twenties’ based on a true story? Let’s find out!

Is Twenties Based on a True Story?

‘Twenties’ is partly based on a true story. The series borrows heavily from Waithe’s experiences as a young and aspiring television writer in Hollywood. In fact, Hattie, who is queer and dreams of being a screenwriter, is based on Waithe, who is a masculine-presenting lesbian actress, producer, and writer. Even though Hattie’s finer details and larger arcs are fictional, several of her hurdles and discoveries tie directly to Waithe’s early days in showbiz. “She [Hattie] is kind of an avatar for Lena,” said Susan Fales-Hill, head writer and executive producer of the show.

Waithe also admitted that Gibbs reminded her of her younger self. “All wide-eyed and giddy,” she said, which is true of Gibbs, her character of Hattie, and Waithe’s own early days as a writer. Waithe, 37, wanted to be a television writer from a very young age. After getting her degree in Cinema and Television Arts from Columbia College, Chicago, she eventually moved to Hollywood to pursue a career in the television industry in the late 1990s and early 2000s.

Lena penned ‘Twenties’ while she worked with big directors and producers. Her story did get a start as a bunch of YouTube videos, but could not progress beyond that. So although Waithe wrote the story for ‘Twenties’ in her twenties, the environment back then wasn’t conducive to launch a show centered around a queer black woman. The show, too, acknowledges the discriminatory history of Hollywood. It also looks at the current glorification of black stories that, however, does not always translate into job opportunities for black people on the ground.

However, the groundbreaking success of movies like ‘Moonlight’ and ‘Get Out’ has enabled several artists of color to finally see their works materialize on-screen. “This is the first time a masculine-of-center black woman has been the center of a show on prime-time TV,” said Waithe about ‘Twenties’. The creator also produced Justin Simien’s 2014 movie ‘Dear White People,’ which is now a hit Netflix series. Clearly, Waithe is passionate about bringing black stories to life.

The team behind ‘Twenties’, featuring a number of persons of color, is passionate about nuanced representation. Humor, popular culture references, eccentric romances, fierce ambitions, and nostalgia give us a peek into the lives of young black women — Hattie, Marie, and Nia — trying to achieve their goals. ’Twenties’ also highlights cultural differences within the black communities in America, challenging the homogenized and stereotypical representations of black women that have graced our screens for decades.

The characters are unique, even if they have strong commonalities. They have different approaches to romance and different career goals. They come from diverse backgrounds but are united in their friendship. “Nia is West Indian. As somebody who’s half West Indian, I’m proud to finally represent the diaspora on the screen,” said Fales-Hill. With ‘Twenties’ there’s a conscious effort backstage to get representation right — this allows what comes on screen to be natural, realistic, and genuinely funny.

One of the most interesting themes in the show is that of female relationships, both personal and professional. Although Hattie’s boss Ida B. is demanding and ruthless, her friends and mother are supportive of her dreams and also critical of her choices when required. “Susan Fales-Hill is the reason why I’m a writer,” declared Waithe. It isn’t surprising that Waithe narrativized bits and pieces of women in the industry who inspired her and paved the way for others like her. Ida B. may be fictional, but her grit is indicative of several women trailblazers in showbiz.

Fales-Hill pointed out how the show’s appeal for her precisely lies in its documentation of the lives of working women. “It’s very much a show about women trying to fulfill their dreams in a city that is a factory of dreams,” she said. ‘Twenties’ shows Los Angeles through the eyes of those that are dreaming in it — queer eyes, straight eyes, all kinds of eyes. The show’s extremely stylized representation of the city is an ode to its entertainment industry, a conscious decision to highlight the appeal and subsequent pitfalls of Hollywood. 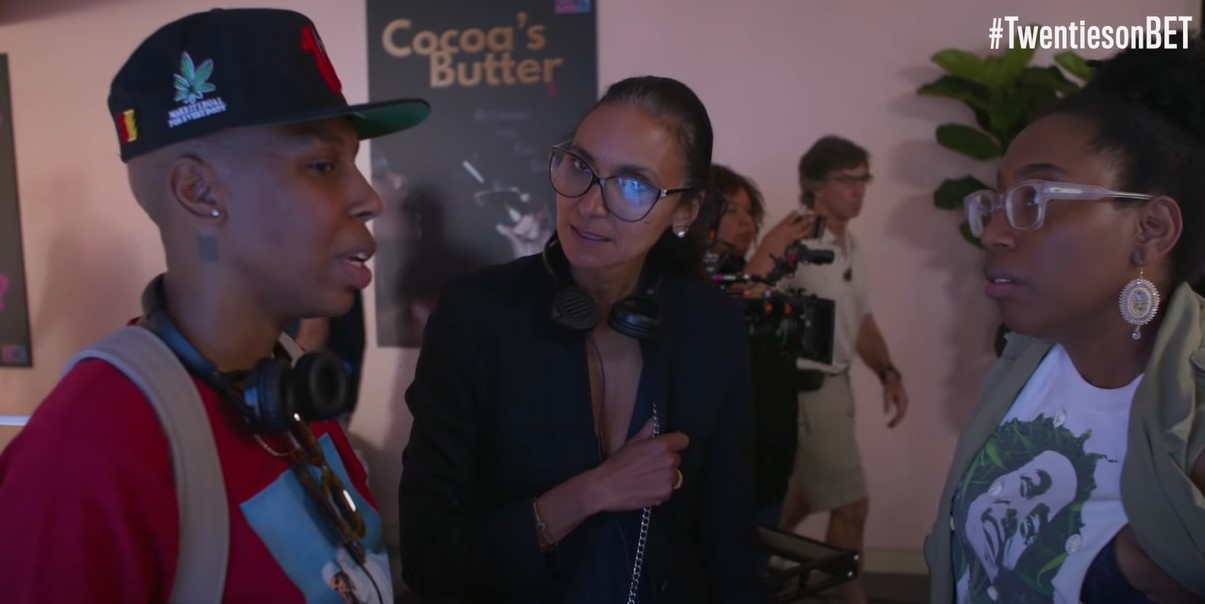 The humor comes in here as well. We see disgruntled interns fetching coffee, hipster boys rattling off about the dangers of technology, and studio employees gossiping and flirting. ‘Twenties’ thus balances lighthearted LA tropes with deeper issues of systemic racism within the industry. All whilst making us laugh. “We had a black man run this country, and we still have yet to have a black man run a major studio,” said Waithe, pointing out the lack of black professionals in the industry.

“The C-suite is 99% white and male,” quipped Fales-Hill. The problems that the trio faces in ‘Twenties’ are deeply rooted in real-life, based on the everyday experiences of the showrunners as well as thousands of people across the country trying to achieve their dreams but facing hurdles due to their race, sex, and sexuality. The storylines of the trio are Waithe’s creativity, but their essence lies in her lived encounters.

Waithe has expertly observed the two extremes in which a majority of people seem to function — either they are disinterested in works created by and starring black individuals, or they hype up works simply because they have black individuals. “A lot of bad black movies get good reviews because white critics are afraid to pan them,” stated Waithe. Her words immediately bring to mind an exchange between Marie and Hattie on the show. “We need to support black shit,” said Marie. “No, we should support good shit that just happens to be black,” responded Hattie.

That’s what ‘Twenties’ does. It gives its characters space to be themselves, learn, make mistakes, and grow. It doesn’t glorify them, and neither does it vilify them. It lets them be, and that’s why the trio seems so realistic. Hattie’s struggles as a writer and Marie fights to wield her power at a workplace a little too comfortable in sidelining women. Nia tries to shift from yoga to acting, despite the scorns of her overachieving and traditional family.

The trio also simultaneously tackles romance and self-discovery while being sure of their core identity. All these little character snippets can be traced back to the show’s creators, who combated all sorts of difficulties on their way to the top. Now that they’ve made it, they can look back and help those who are still climbing with truthful and entertaining stories. Those still in their twenties.

Shows like ‘Dear White People,’ ‘BlackAF,’ ‘All American,’ and ‘Orange is the New Black’ attempt to exhibit what it’s like to be black in modern-day America. ‘Twenties’ does the same, but with the added twist of the entertainment industry. The comedy-drama may not be fully rooted in reality, but it draws its content from the very authentic lived-in experiences of its creators as well as the black folk of America. ‘Twenties’ is thus a semi-autobiographical show that perfectly blends fact and fiction.