Jaeden Martell: Everything we Know 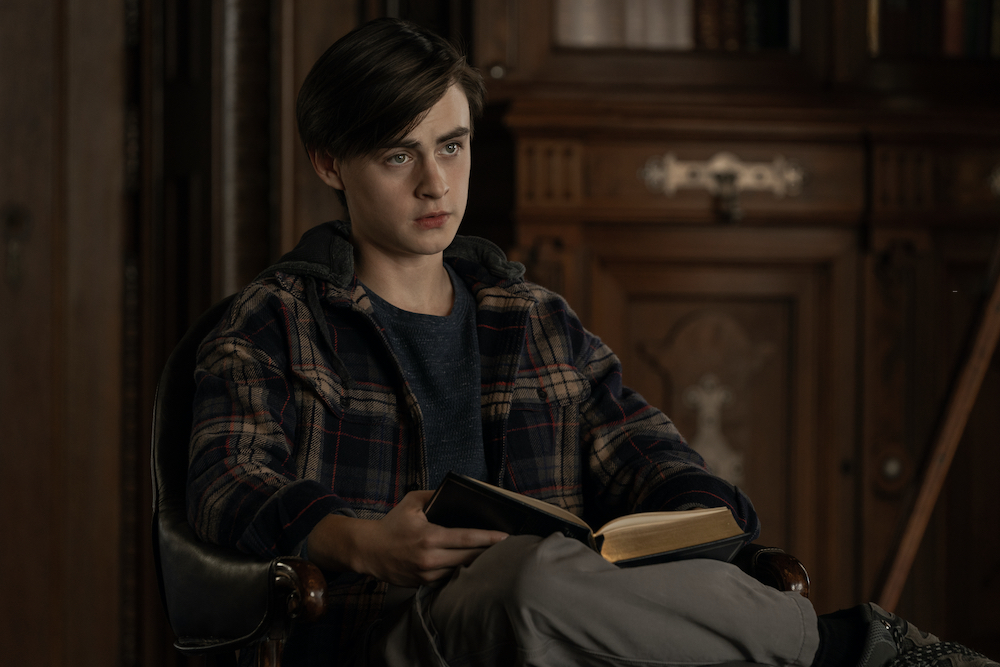 The young and talented Jaeden Martell is achieving great success with his incredible series of work in just a few years. Jaeden is progressively building a successful career while performing incredibly alongside some highly acclaimed filmmakers and actors. After beginning his career at the age of 8 with several popular brands’ commercials, he has worked his way up to some excellent projects like ‘St. Vincent,’ ‘It,’ ‘Knives Out,’ and ‘Defending Jacob,’ among others.

After years of refining his skill, Jaeden’s hard work and determination landed him the role of Craig in the teen horror-drama film ‘Mr. Harrigan’s Phone.’ Directed and written by John Lee Hancock, it is based on the eponymous novella by Stephen King. Jaeden’s compelling performance as Craig in the Netflix movie has garnered him numerous inquisitive fans, who must be curious to know more about him. Here’s what we found out!

Born on January 4, 2003, Jaeden Martell is a South Philadelphia, Pennsylvania native with a mixed heritage. He has Korean roots on his mother’s side; his maternal grandmother, Chisun Martell, is Korean. Apart from that, he also has traces in English, German, Scots-Irish, Belgian-Walloon, French-Canadian, and Scottish. The 19-year-old is the son of well-known Los Angeles–based executive chef Wes Lieberher, while his mother is Angela Teresa Martell, who has been his biggest support throughout his career.

Growing up, Jaeden has had the love and support of both his parents, who often express their admiration and pride in his work and integrity on social media. However, his parents separated when he was young, and he was raised mainly by his mother, with whom he resides to date, after moving to Los Angeles when he was 8. Now, Jaeden shares a good relationship with his father’s wife of 7 years, Bree Lieberher, and three half-siblings — Sydney, Jovi, and Hayes. It is, however, his mother, with whom Jaeden is especially attached and often thanks her for her love and support in everything he does.

In a sweet Mother’s Day post, Jaeden poured his heart out, saying, “Happy Mother’s Day to the most beautiful, caring, strong person I know. She makes me a better human everyday. I won’t ever be able to repay her for the sacrifices she’s made for me. Love you so so much, mom.” He often refers to her as his best friend and favorite person and loves visiting various beautiful places around the world. In fact, after being credited as Jaeden Lieberher under his family name for the first six years of his career, he changed his last name legally to Martell in 2019.

In an interview with GoldDerby. Jaeden explained his decision to change his name. He said, “That is my mom’s last name and I wanted to honor her because she is here with me every day that she’s on set with me and she makes me the person I am. I owe everything to her and she has raised me the last 17 years.” He is inevitably also close to his extended maternal family and ‘It’ co-stars Wyatt Oleff, Sophia Lillis, Finn Wolfhard, and Jack Dylan Grazer.

Jaeden Martell first tried his hands at acting through commercials without actually wanting or dreaming to do so while growing up. His first role was in a commercial for Hot Wheels when he was 8-years-old. His talent led him to many more commercials such as Google, Hyundai (2013 Superbowl), Liberty Mutual, General Electric, etc. He then got cast in the short movie ‘Grief’ in 2013. Jaeden realized acting was his true calling when he began shooting for his feature film debut, ‘St. Vincent’ at the age of 10.

Talking about the same in an interview with Collider, he said, “Even when I just started acting and was doing commercials for a while, I didn’t know what it meant to be an actor.” He continued, “But then, when I did my first movie, ‘St. Vincent,’ I was 10 years and I discovered, ‘Oh, this is what acting is, and I love it. I don’t think I wanna do anything else for the rest of my life.’ That’s a crazy thing to discover when you’re that age. It’s hard enough to be able to do what you love, but to know what you love is also extremely hard to come by, so I just feel lucky.”

After gaining recognition and bagging a few awards for his performance as Oliver Bronstein in the 2014 film, Jaeden’s co-star Bill Murray suggested his name and vouched for his talent to Cameron Crowe for ‘Aloha.’ He then went on to showcase his skills in movies and shows like ‘Playing It Cool,’ ‘Midnight Special,’ ‘The Confirmation,’ ‘American Dad!,’ and ‘Masters of Sex.’ Jaeden’s big break came in 2017 with his appearance as Henry Carpenter in ‘The Book of Henry’ and Bill Denbrough in the supernatural-horror film ‘It,’ as well as its 2019 follow-up ‘It Chapter Two.’

Jaeden further made his name as a proficient actor in the 2019 Apple TV+ miniseries ‘Defending Jacob’ and the murder-mystery film ‘Knives Out.’ His further commendable performances include his portrayal of Kevin Schlieb in Netflix’s ‘Metal Lords’ and Craig in ‘Mr. Harrigan’s Phone.’ Fans of the actor must keep their eyes peeled for his upcoming projects ‘Tunnels’ and ‘The Lost Boys’, which are in the post-production stage and set to release soon.

Is Jaeden Martell Dating Anyone?

Jaeden Martell is quite a private person when it comes to sharing details about his personal life. However, social media is a huge network base, and hardly anything skips away from the public eye. Thus, several reports suggest that he was once in a relationship with Sateen Besson, a musical artist, model, and social media influencer from Paris. The 19-year-old is the daughter of Luc Besson, a famous French film director, producer, and screenwriter, and Virginie Besson-Silla, a Canadian-French film producer.

Although it isn’t clear how and when they met, Jaeden and Sateen were known to be quite wonderful together and often surprised each other on special occasions. However, according to reports, the two might no longer be together, although there is no confirmed evidence to base such information. Other than that, Jaeden is going well in his career and seems to be highly focused on that.

In his downtime, the actor loves to spend quality time and go on adventures with his mother and friends. He also wishes to work behind the camera as a director someday in the future. Jaeden got the noble opportunity of being one of the official ambassadors of the June 2022 Special Olympics held in the USA. We, thus, wish him more success and happiness in the future.