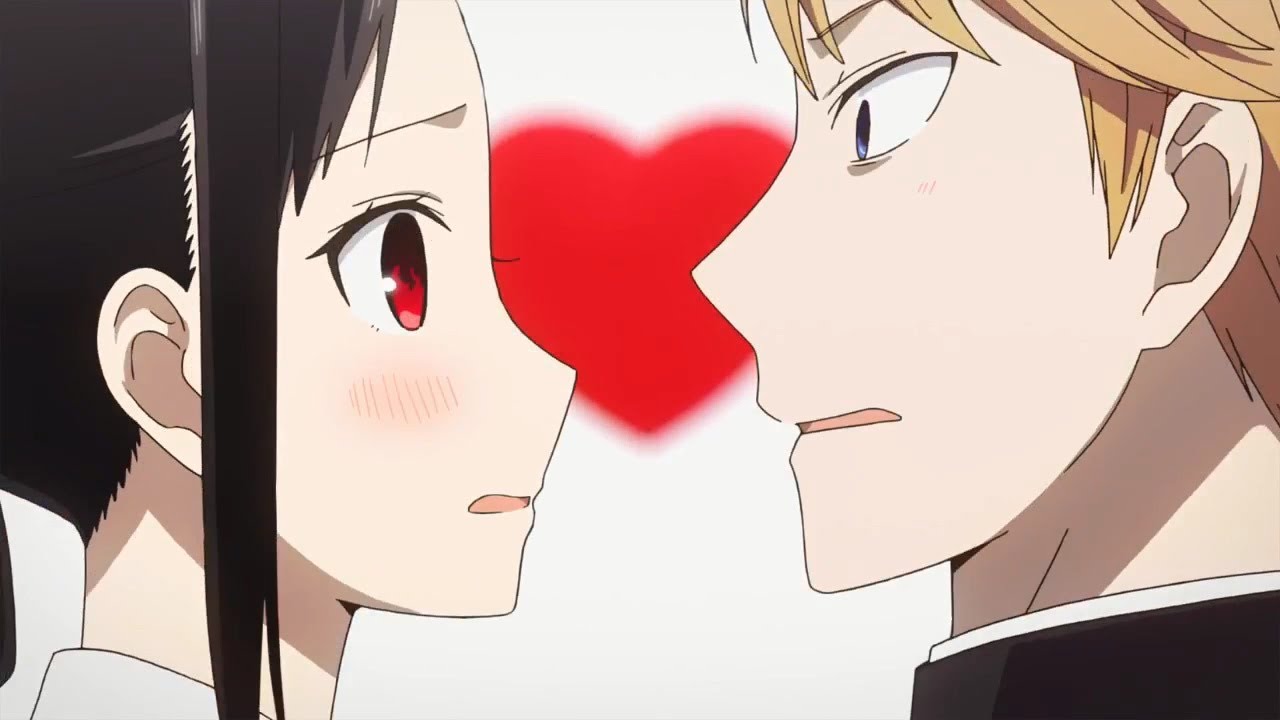 “Tsundere” is a Japanese term used for describing a character who is initially very cold and hostile to the person he/she loves but later warms up to them. Most anime revolve around a Tsundere girl who hates the fact that she in love with some guy but ‘Kaguya-sama: Love is War’ takes a rather different approach towards this and portrays two characters who are both in love but their biggest problem is that they’re both Tsundere; this ensues more of a battle between them. The ideas that this anime portrays can all sound dumb and boring  — “Love is war” is the main theme. But surprisingly, every single episode is more entertaining than the previous one and the anime just blows your mind with its perfect execution.

A-1 Pictures, known for other anime like ‘Sword Art Online‘ and ‘Fairy Tail‘, does a surprisingly good job with the comedic scenes of the anime. The animation quality is impressive and remains consistent throughout the show. This, along with fantastic dialogues and brilliant directing will make you crack up throughout its runtime. Overall, ‘Kaguya-sama: Love is War’ is fast-paced, exciting, downright hilarious and is totally binge-worthy. What more can you ask for?

Kaguya-sama: Love is War Season 2 Release Date: When will it premiere?

‘Kaguya-sama: Love is War’ season 1 premiered on January 12, 2019 and went on till March 20, 2019. During this span, it aired a total of 12 episodes with each one of them being 25 minutes long. Undoubtedly, the anime has gained a lot of popularity in a very short span and from its ratings on most platforms, it is clear that most viewers are receiving it really well.

Now, most slice-of-life anime, no matter how good they are, don’t usually last longer than 12-13 episodes except for a few like ‘Toradora!‘. Even the ending of ‘Kaguya-sama: Love is War’ is quite conclusive but at the same time, it also leaves some room for the possibilities of season 2. If we look at the studio that is behind the anime, A-1 Pictures usually never leaves an anime undone and somehow does find its way back to most of its popular shows. So that seems to be in favor of the anime’s renewal.

And since ‘Kaguya Sama’ managed to be one of the best anime of 2019, its second season has already been confirmed and is slated for a release in April 2020.

The English Dub of ‘Kaguya-sama: Love is War’ has not released yet but you can still stream the anime with its original Japanese audio and English subtitles on Netflix and Funimation. If we get any updates regarding its licensing or English Dubs, we will surely update it here.

Miyuki Shirogane and Kaguya Shinomiya are the highest-ranked representatives at the student body of the famous Shuchiin Academy. Miyuki is the number one student in the entire country who has gained the respect of all of her teacher and students. He serves as the president of the student council and no one really questions his position as everyone is very well aware of how deserving he is. Kaguya is the daughter of the extremely rich Shinomiya family and just like Miyuki, she excels in every field possible. She serves as the vice president of the council and the two of them together are looked upon with envious eyes of other students who see them as this perfect couple.

However, most people are not aware of the fact that despite having feelings for each other, the two are simply not willing to confess anything. Both of them have this egoistic belief that the first one to confess first would actually be looked down upon and will be considered to be of lesser power than the other. Most high school relationships are pretty simple and direct but this one here is one battlefield where pride, honor and a lot more is at stake. Both of them use various schemes to make the other one confess and in the end, one of them will have to give in and lose the battle but at the same time, to win something much greater.

Chika Fujiwara is the secretary of the student council at the Shuchiin Academy. She has been friends with Shinomiya since a very long time and is known for being very unpredictable. She can be really silly at times and is often found gossipping about others. But compared to Kaguya and Miyuki, she is quite level-headed and often takes it upon herself to make them understand how they can deal with their shortcomings. In appearance, she is a beautiful pale-skinned girl with long pale pink hair and big light blue eyes. She has a bubbly personality and always carries a big pleasant smile on her face.

Yuu Ishigami is the treasurer at the student council who is a handsome teenage boy with chin-length black hair. He usually walks around with a very dull expression on his face and has a slightly gloomy personality. He is disliked by most other students because of some event in the past and that’s the reason why he prefers to spend most of the time playing video games alone. He shows an immense amount of cynicism and has a very depressing outlook towards everything.

Kaguya is the vice president of the student council who is the daughter of the famous royal Shinomiya family. She is a very cold person who only warms to other students after she becomes a member of the student council. She tries to play a lot of mind games with Miyuki to make him confess his feeling for her.

Miyuki is a second-year student at the high school who is the president of the student council. He has had a very underprivileged background but with sheer determination and hard work, he has managed to climb his way to the top and is now able to excel at everything in school.