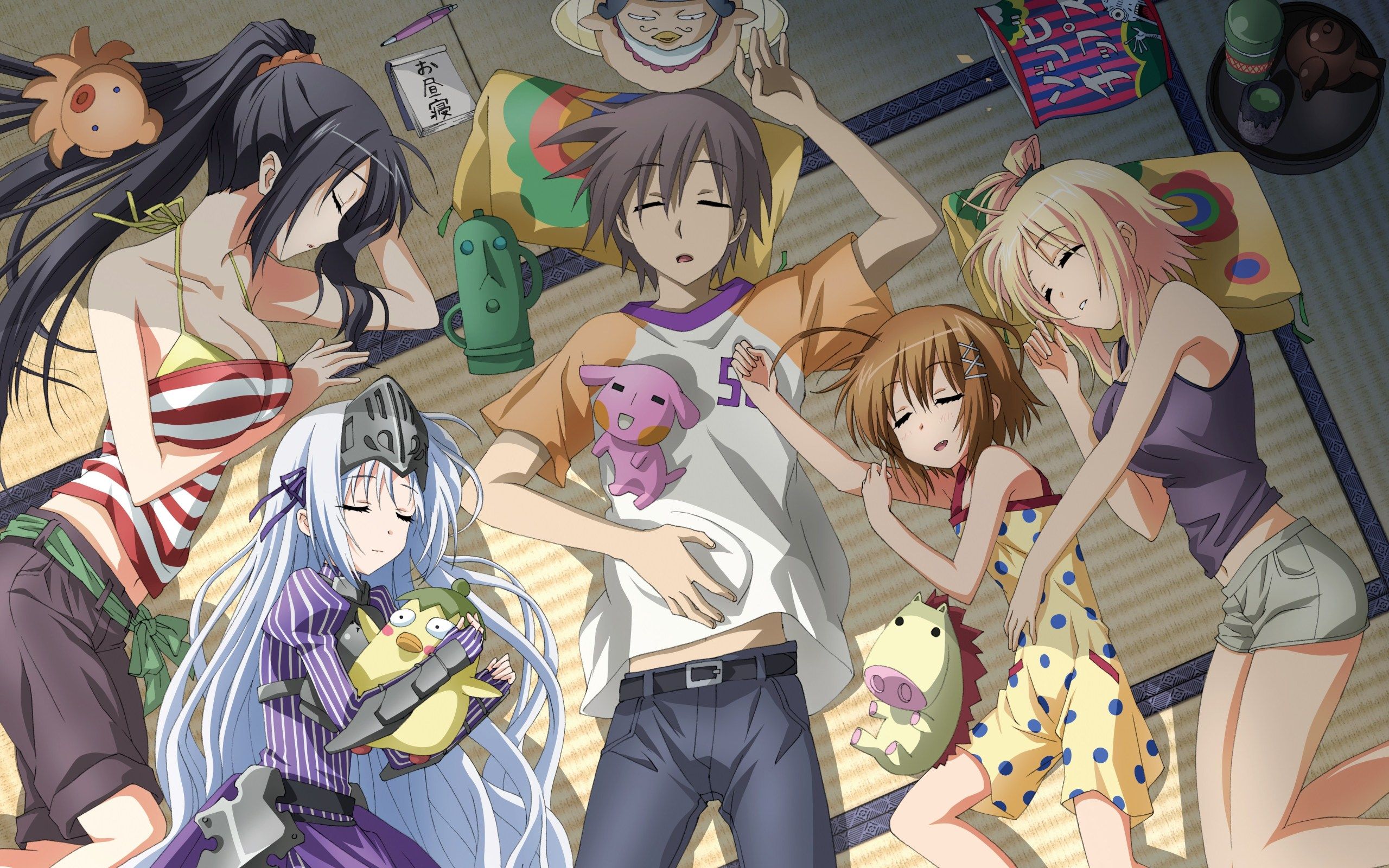 A lot of times, when you’re watching an anime, you have to turn off everything you have ever known and leave all your common sense behind for a while. This is exactly what you need to while watching  Is This a Zombie, also referred to as ‘Kore wa Zombie Desu ka?’, as it brings some of the most bizarre and nonsensical ideas that you’ve probably never even heard of. In this anime, you have giant lobsters as monsters, you get to see zombies who are allergic to the sun while there are vampire ninjas who seem to be fine with it and the weirdest of all is the main zombie character who walks around wearing a pink dress. Now as mindless as all of this may sound, ‘Is This a Zombie’ is actually very entertaining and it’s these illogical plot points that actually make it so hilarious and fun to watch.

Despite having so many mundane, wild concepts crammed into its 12-episode span, the anime still manages to have a structured and linear storyline. From a slapstick-heavy show like this one, you wouldn’t really expect much of character development. But surprisingly, almost all main characters have deep unique personalities and also have well thought out backstories. While there is nothing too spectacular about the animation, the action scenes are pretty good and have dark and gory undertones to them. The only big flaw of the anime is that you just can’t take it seriously even when it is trying to be that way because it just takes its comedy too far. But even then, despite a few minor flaws that it has, ‘Kore wa Zombie Desu ka?’ is really fun to watch.

Is This a Zombie Season 3 Release Date: When will it premiere?

The first season of the anime did really well and that’s probably the reason why a season 2 was released soon after it. But compared to Season 1, the second one was not too great and did not sell too well. Although the anime still lacks a proper conclusion, it has been a while now since we’ve heard anything about the show. And after all these years now, the odds are definitely not in its favor. There is still a lot of source material left for a whole season 3 but at this point of time, it’s hard to say anything about its confirmation. Let’s just hope that the creators will reconsider this show in the future someday and when that happens, we will surely update ‘ Is This a Zombie’ season 3 release date right here.

Is This a Zombie English Dub:

The English Dub of ‘Is This a Zombie’ is available on Funimation.

Is This a Zombie Plot:

The common belief around zombies is that they are evil, undead creatures who feast on humans. And even if they are not evil, they have this strange fascination for human brains that allows them to feel a little more alive than they actually are. ‘Kore wa Zombie Desu ka’ is about none of that and it revolves around a young high school boy named Ayumu Aikawa who is killed by a serial killer one day while he was walking back home from a convenience store. But soon after this tragic event, he is brought back to life by a necromancer named Eucliwood Hellscythe. He soon realizes that he is now a zombie and his life will never be the same.

However, things get weirder when Aikawa unknowingly steals the school uniform of a magical girl and gets all of her powers. Haruna, whose magical powers he now owns, orders him to fight evil forces called Megalo till the time she tries to figure out a way to get her powers back. Life just keeps getting stranger for Ayuumi who could not even die in peace and he must now learn to accept this new life that he is forced to live.

Is This a Zombie Characters:

Ayumu Aikawa is the main protagonist of the show who is a regular 16-year-old school-going kid. His world turns upside down when one day he is killed by a serial killer and gets reincarnated as a zombie. He later even gets magical powers after he accidentally wears the school uniform of a girl. He is a young man with greyish to white hair with a very simple hairstyle. He is usually seen in his school uniform and when at home, he is seen in simple shirts. As a zombie, he hates sunlight and gives in to pain very easily but then he soon remembers that he is immortal.

Harun is another main character of the show who is Mahou-Shoujo in training and belongs to the world of Villers. She has short brown hair, purple colored eyes, and one fang. She also appears to be younger than most other characters because of her short height. Just like her appearance, she even acts very childishly and often beats up Ayumu over petty things. She even has a hard time remembering names of people and Ayumu is the only exception to this as she has a thing for him.

Eucliwood Hellscythe is a necromancer who is nicknamed “Eu” by most characters. On the streets of Tokyo one day, she runs into Ayumu and decides to raise him from the dead after he is murdered by a serial killer. She appears to be a medieval young woman with her slivery long hair and her deep blue eyes. She wears a purple dress that is covered with silver armor. Even when she’s taking a shower, she clads the armor’s headgear as it acts as a suppressor of her magical abilities. She never really talks or changes her facial expressions in any way; instead, she writes down her thoughts on a note pad to communicate with others. She avoids talking because every time she does that, her powers get activated regardless of whether or not she wants to use them.

Seraphim is a vampire ninja who wanted to be Eucliwood’s servant but Ayumu takes her place and she is forced to stay with them as Ayumu’s servant. She is a beautiful young woman has straight black hair and green eyes. She wears clothes that emphasize her figure and often gets a lot of attention for her glamorous proportions. She is extremely dedicated to her status as a ninja and can be very ruthless to anyone who tries to question it.

Yuki Yoshida, also known as Maelstrom, is another vampire ninja who belongs to a fraction that opposes Seraphim’s clan. She is short compared to most other characters and has shoulder-length blond hair. Initially, she acts all rude and refers to herself as an “Ore”. But later, she completely transforms after she kisses Ayumu and reveals a more shy and sensitive side. She has the ability to dispel Megalo by covering them in tonkotsu ramen. She even carries ramen in a spray bottle for emergencies where a Megalo might unexpectedly show up. She also has a spirit inside her, named Mysticore, which can take over her entire body and destroy everything in sight when she loses control.