12 Movies You Must Watch if You Love ‘Signs’ 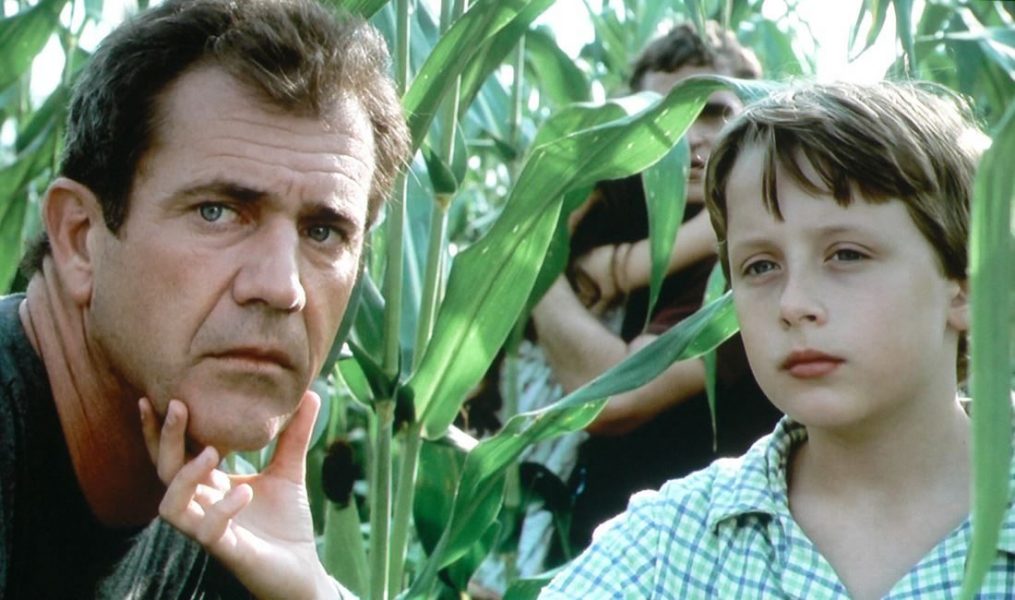 ‘Signs’ was a really big deal and a milestone, if the collective wisdom of M. Night Shyamalan’s movies is to be considered. A filmmaker who derives his inspiration from the likes of Spielberg and George Lucas shouldn’t be written off so lightly. While many admired the film as a successful venture and a game changer in the “alien” genre of filmmaking, the film was received with an equal number of criticisms in terms of loopholes in the storyline or the illogical twists or the sometimes the naïve overtures on the script.

Of all the movies directed by Shyamalan, ‘Signs’ has one of the relatively higher scores on Rotten Tomatoes as well as the IMDB. Regardless, I (and many others) still consider ‘The Sixth Sense’ as the greatest product of Shyamalan’s filmmaking so far. With Mel Gibson and Joaquin Phoenix at the helm, ‘Signs’ is the story of a former priest Graham Hess who lives with his two children and brother in Pennsylvania. After his findings of weird crop circles in his cornfields, strange incidents start taking place with alien-related activities all over the world and also around their house. Soon, they find one ensnared in their own house, with Graham’s son’s life at stake and also his family, his beliefs and his factual conversance.

Movies about superhumans (read ‘Split’, ‘The Last Airbender’, ‘Lady in the Water’, ‘Unbreakable’, ‘The Sixth Sense’ etc.) or aliens/alien invasions (read ‘Signs’), or some strange, inexplicable, or supernatural phenomena (read ‘The Visit’, ‘The Village’ etc.) have always been the pursuit of Mr. Night Shyamalan, at least so far. Here, we take a look at the list of movies similar to ‘Signs’ (i.e. Alien Invasion, Family, and Relationships, valor and sacrifice etc.), that are our recommendations. You can watch several of these movies like Signs on Netflix, Hulu, or Amazon Prime. 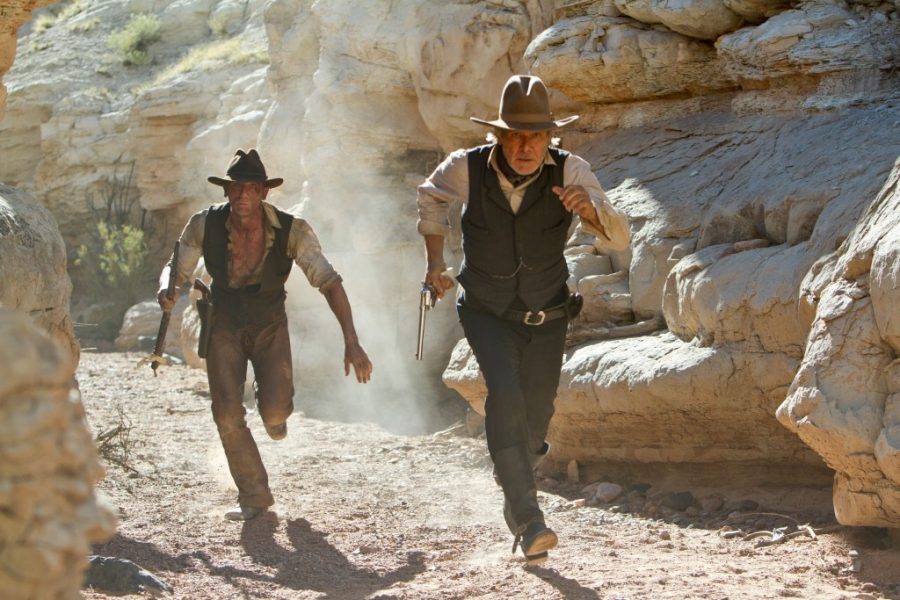 A film that can be associated with biggies like Jon Favreau, Daniel Craig, Harrison Ford etc., ‘Cowboys and Aliens’ is a slightly funnier yet plausible take on the alien invasion when the aliens choose to take the wild west route this time instead of the boroughs of NYC. Dating to the 1870s, the story revolves around Jake, Colonel Woodrow, his son Percy, and Ella, who find themselves amidst an invasion by the aliens and an inexplicable weapon attached to Jake’s wrist which helps him fighting the invaders as well as in ultimately destroying the alien mothership. Not one of the best alien movies, yet, this one’s bearable for a start. 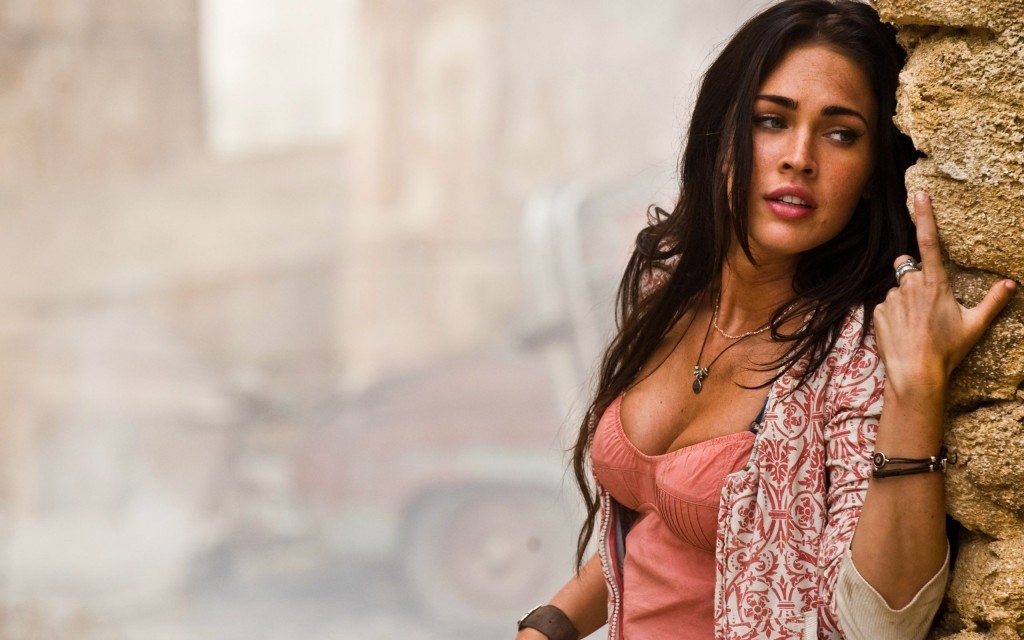 I know many hate this, but nevertheless, this too falls into the category of family, relationships, love (or lust maybe), and aliens. The movie tries to establish the long-standing feud between Autobots and Decepticons, who hail from a now devastated planet Cybertron, with a bunch of humans assisting Autobots and leading the fight against Decepticons. With the Decepticons’ quest to gain the possession of the AllSpark, a powerful cube which yields unlimited power, and Sam’s and other Autobots’ feats to save the cube from falling into the wrong hands, the ending of ‘Transformers’ surely paves way for new and increasingly degrading storylines for many years to come. All said and done, ‘Transformers’ still stands the tallest among all the movies of its otherwise overused franchise. 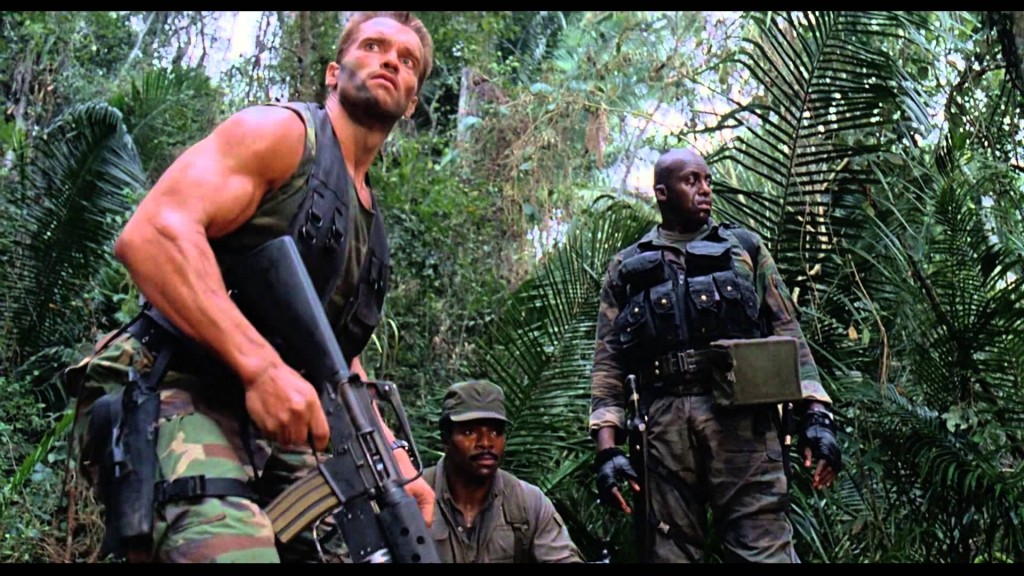 Maybe the only tolerable effort in its franchise, ‘Predator’ has Arnold Schwarzenegger as Dutch at the helm – a badass leader of the pack, with a massive gun (nothing new, ain’t it?), and an alien creature at the opposing end, who hunts and kills Dutch’s teammates, one at a time. Somewhat illogical at a few moments and nothing out-of-the-box, yet all points must go to Arnold for his in-character portrayal. And the ending fight scene with the alien creature was him going a little overboard maybe. Watch it only for Arnold, a truckload of action sequences and maybe some killings by an alien. 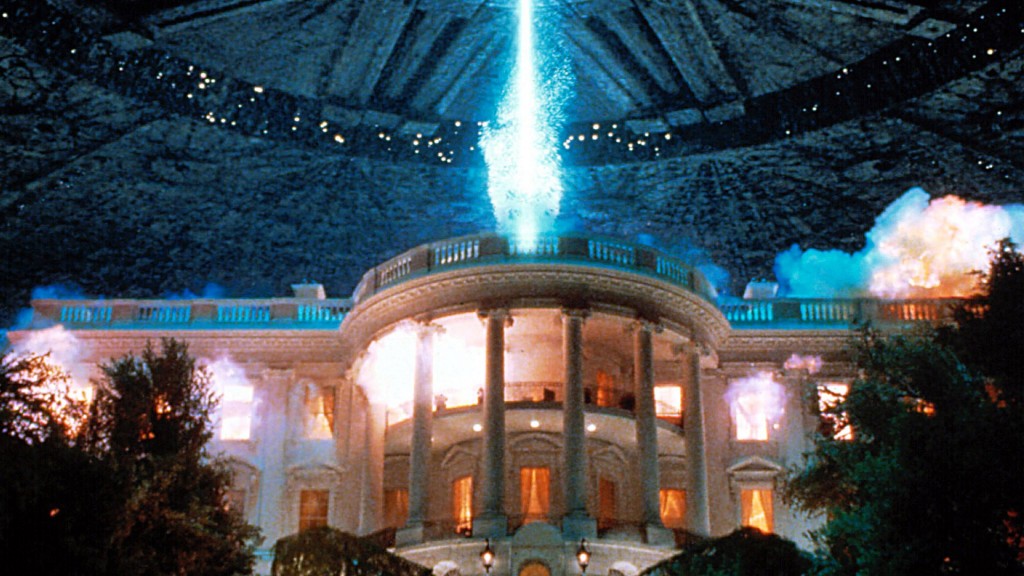 An all-in-all alien intrusion film, moreover at a larger (planet-wide) scale, ‘Independence Day’ boasts of actors like Jeff Goldblum, Will Smith, Bill Pullman etc. So basically, a couple of days prior to the American Independence Day, an alien ship descends into Earth’s atmosphere which not only proves hostile but extremely dangerous to all the Earth’s lifeforms. It takes the ingenuity of the scientists and pilots to figure a fool-proof way to destroy the mothership and ward off a possible alien attack. Predictable yet impactful, ‘Independence Day’ is worth the effort and is a milestone success in terms of all alien invasion movies. 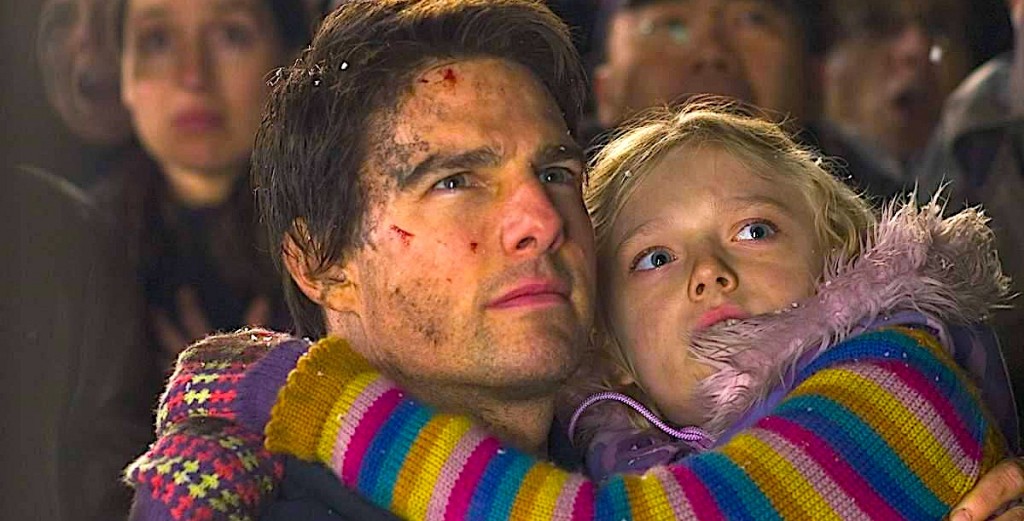 Arguably, one of the more often critiqued works of Mr. Spielberg, ‘War of the Worlds’ failed to make the impact or the impression left by the original version(s) filmed 1953 onwards. Regardless, ‘War of the Worlds’ was based out on the famous novella by H.G. Wells of the same name. With the epic narration of Morgan Freeman, ‘War of the Worlds’ is the story of a divorced crane operator Ray, who has his children visiting him one fine day. Suddenly, all hell breaks loose and Ray finds himself amidst the mayhem of invading Martian tripods, piercing themselves off the ground and killing innocents. The story follows with Ray running from pillar to post with his kids, finding new methods of eliminating the pods and ultimately helping things get better. A movie replete with all kinds of twists and the one that portrays the superb sprinting skills of Tom Cruise, ‘War of the Wolds’ is still a worthy classic. 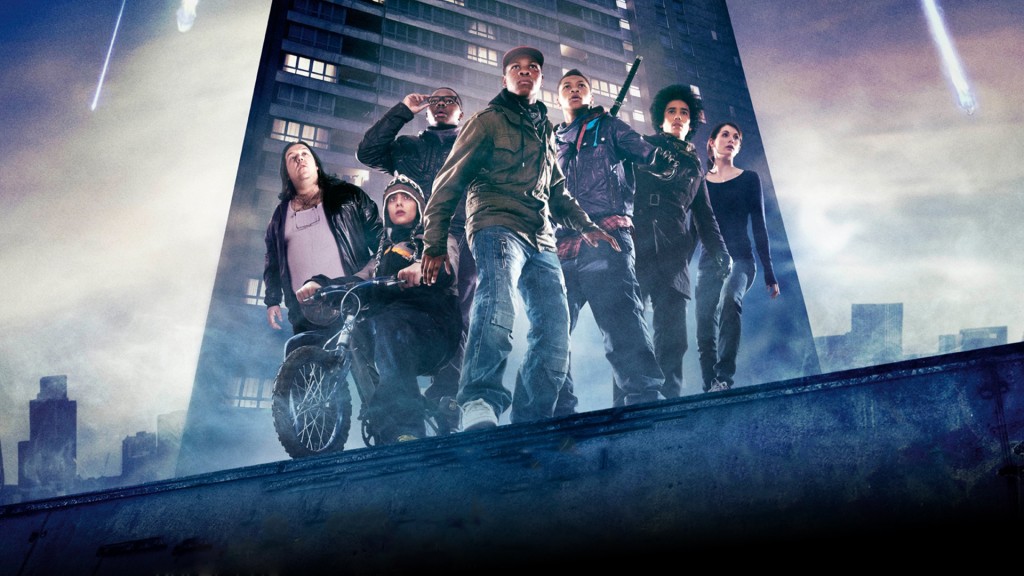 What’s common between a bunch of British teens and Tom Cruise? They both hatch up plans to kill aliens in the most horrifying manners possible. And they succeed. ‘Attack the Block’ is the story of a gang of teenagers who discover aliens falling upon Earth in meteorites and then they collectively uncover the larger plot of an alien invasion. Befuddled, they take the task upon themselves and systematically eliminate the aliens successfully from the neighborhood. And as a result, the gang succeeds in foiling an extraterrestrial attack. Boggling and gritty, ‘Attack the Block’ is one of the lesser recognized movies on alien invasions, yet highly recommended. 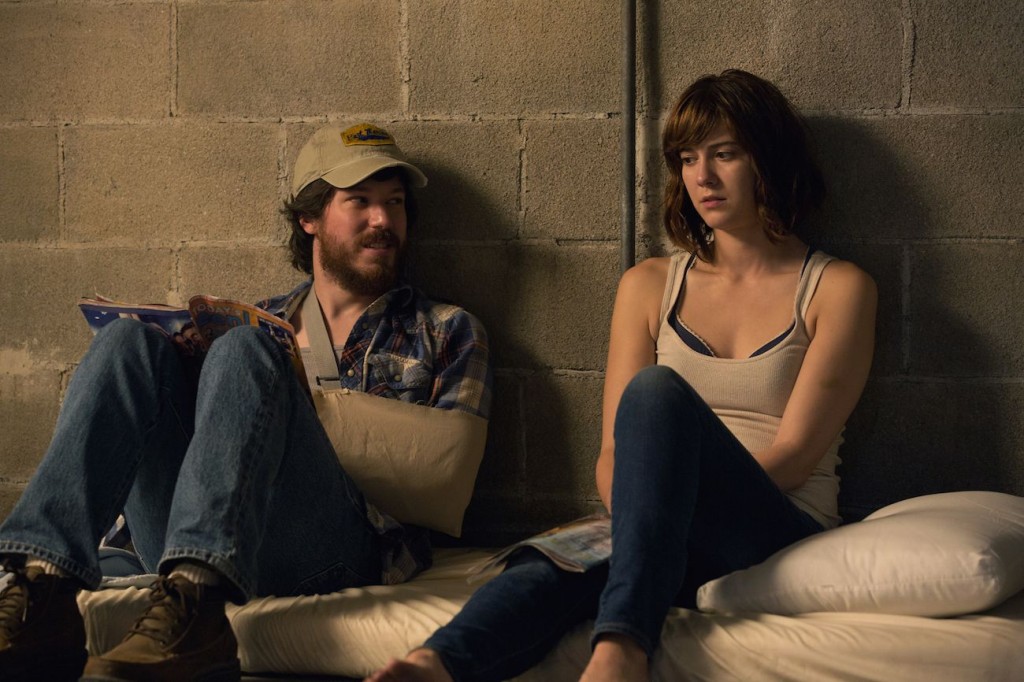 Perhaps not one of the firsts where J.J. Abrams has been directly involved with alien movies, ’10 Cloverfield Lane’ is one of the most complicated, yet extremely thrilling and spectacular movies based out on aliens, even though we don’t get to see any until the last few frames of the movie. The story revolves around a girl named Michelle who, following an accident, is held captive in a bunker by one Mr. Howard under false pretense along with another person named Emmett. In a strange turn of events, Michelle gets acquainted with shocking details of the previous “residents” of the bunker, followed by her miraculous escape and her confrontation with the invading extraterrestrials for the first time. A perfect edge-of-the-seat movie for alien enthusiasts, yet the one that won’t bring you anywhere near to the closure. 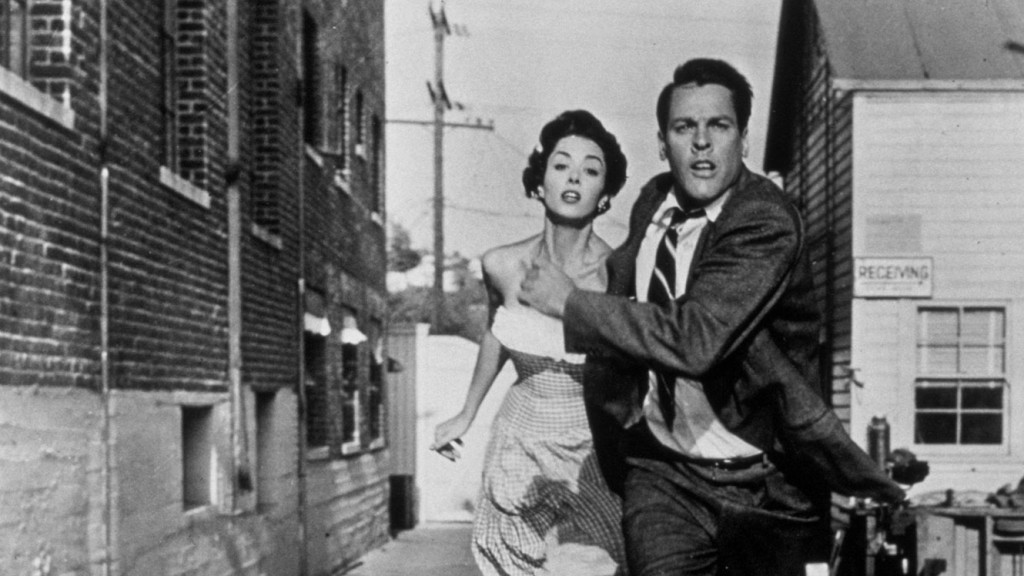 Based out on a Sci-Fi novel “The Body Snatchers” by Jack Finney, ‘Invasion of the Body Snatchers’ is not just another alien attack and invasion movie. Based on the timeline when it was released, I’d certainly say it was way ahead of its time. The story is set in and around a small town called Santa Mira, whose residents witness the strange phenomenon of the people they know being replaced by pod-people, i.e. people with same bodies yet soulless, emotionless folks who seemingly have lost their identities. Something that is being brushed off by calling it an epidemic, soon turns out to be a mass-alien invasion and infiltration, with an entire population being “excavated” and replaced with these mere bodies. Intriguing and thoughtful, this never-heard-before story will make many filmmakers rethink their scripts and may give them a run for their money.

Another Spielberg’s movie in this list, though not the least of his films, ‘Close Encounters of the Third Kind’ boasts of superiority in all its departments and certainly is the face of all alien movies out there. A film which perfectly explores the plausibilities of life forms’ presence outside our planet, ‘Close Encounters of the Third Kind’ is though non-invasive in nature from its original point of view, it gives away the intended message perfectly. The story primarily revolves around Roy and Jillian, the protagonists, who become obsessed with UFOs and despite the attempts by the Government agencies to conceal the presence of the extraterrestrial, choose to pursue them at all costs. The ending is rather heartwarming, with Roy becoming the chosen one to accompany the otherwise “friendlier” aliens on their journey. 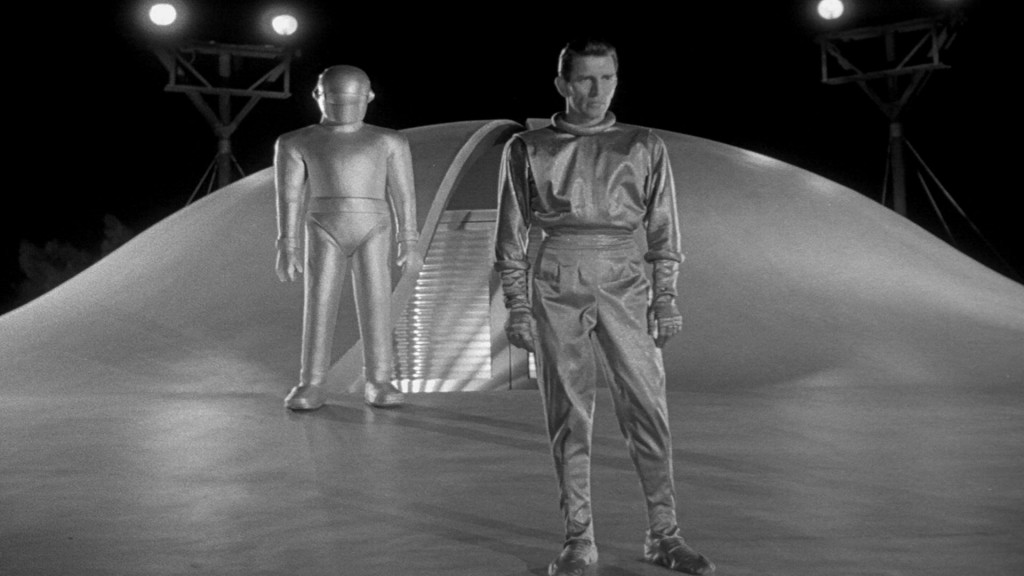 While the version of the movie that Keanu Reeves appeared in, in 2008 barely managed to impress us, the movie that was made in 1951 was a smash hit and widely popular, despite being made in Black and White. Though the storyline of both the films is nearly similar, it is the pioneer-effect that is the winner. A story that is retold many-a-times and expected to be getting better, yet doesn’t, isn’t probably a good storytelling. ‘The Day the Earth Stood Still’ is the story of an alien named Klaatu, who has arrived on planet Earth to deliver a crucial message. While Klaatu goes places looking for the right person to share this information with, a robot-like humanoid named GORT guards his mother ship. Watch the trailer here and see if you can still relate the newest version of the movie to the original one. 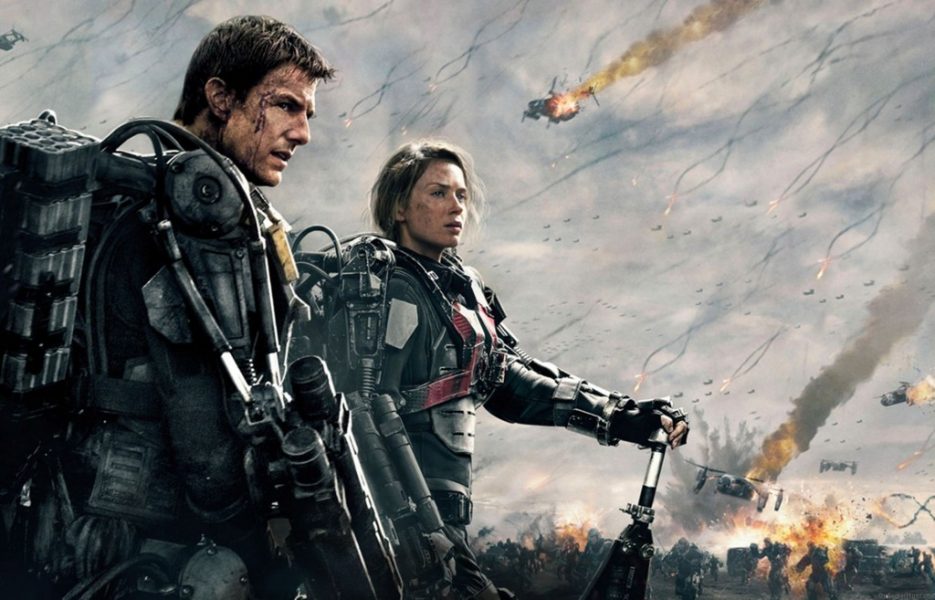 Perhaps one of the most brainy movies ever made on aliens and conquering the world (a.k.a. a “perfectly evolved world-conquering organism”), ‘The Edge of Tomorrow’ is a slap on the face of those who think alien movies can’t be intelligent like the purported aliens themselves. Centered around one Major William Cage and Sergeant Rita Vrataski, ‘The Edge of Tomorrow’ is the pursuit of an alien’s brain or central nervous system known as Omega (i.e. like a mothership of all the controllable beta and alpha alien mimics) by Major Cage and Rita, wherein, interestingly, the Major gets to relive the same day each time he’s killed, thanks to the alpha alien mimic he kills previously. Replete with twists and turns, ample humor with the same scenes repeating again and again and with Tom Cruise sprinting around, ‘The Edge of Tomorrow’ has a perfect dose of thrill backed by comedy and superb action sequences. This one will make you “Live. Die. Repeat.” on the screen, over and over again. One of the best Tom Cruise movies till date. 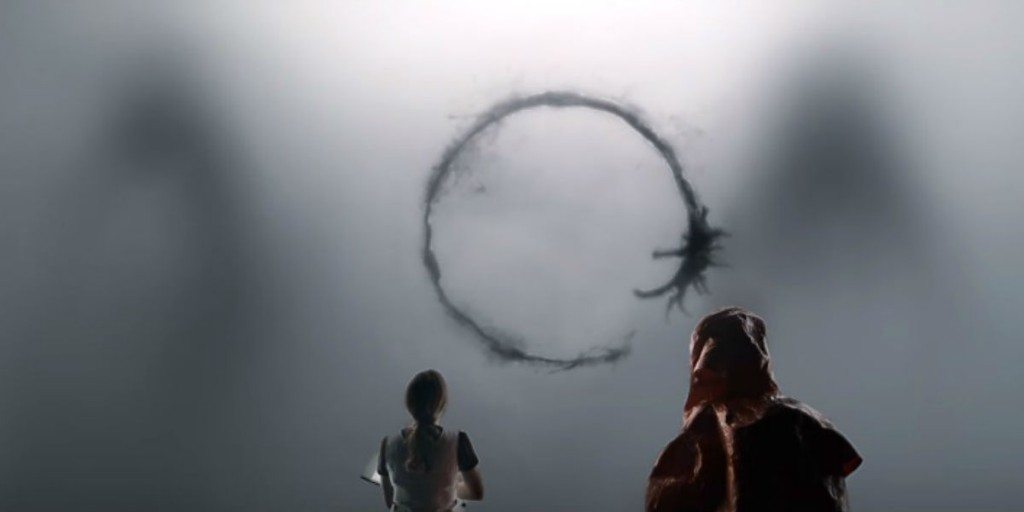 Often claimed to be the best movie on the aliens so far, ‘Arrival’ is above and beyond the generic filmmaking. ‘Arrival’ is the story of a linguist Louise who is hired by the U.S. Army to decipher a set of symbols (used as a language) which are used by the Hepta-pod aliens to communicate with the humans. The aliens, who have arrived in 12 ships across the world, deliver a message stating if they help the world now, they might need the world’s help in return after 3000 years. Their language is being touted as a weapon in the whole movie and those who can understand their language could foresee the future (in this case, Louise). As Louise expands her horizon and tries to decipher their language, she starts seeing visions of her dying daughter. All said and done, the movie does have a conclusive ending which was a relief. ‘Arrival’ defies all cliches on alien movies and is certainly the best movie on alien arrival (if not invasion), ever.