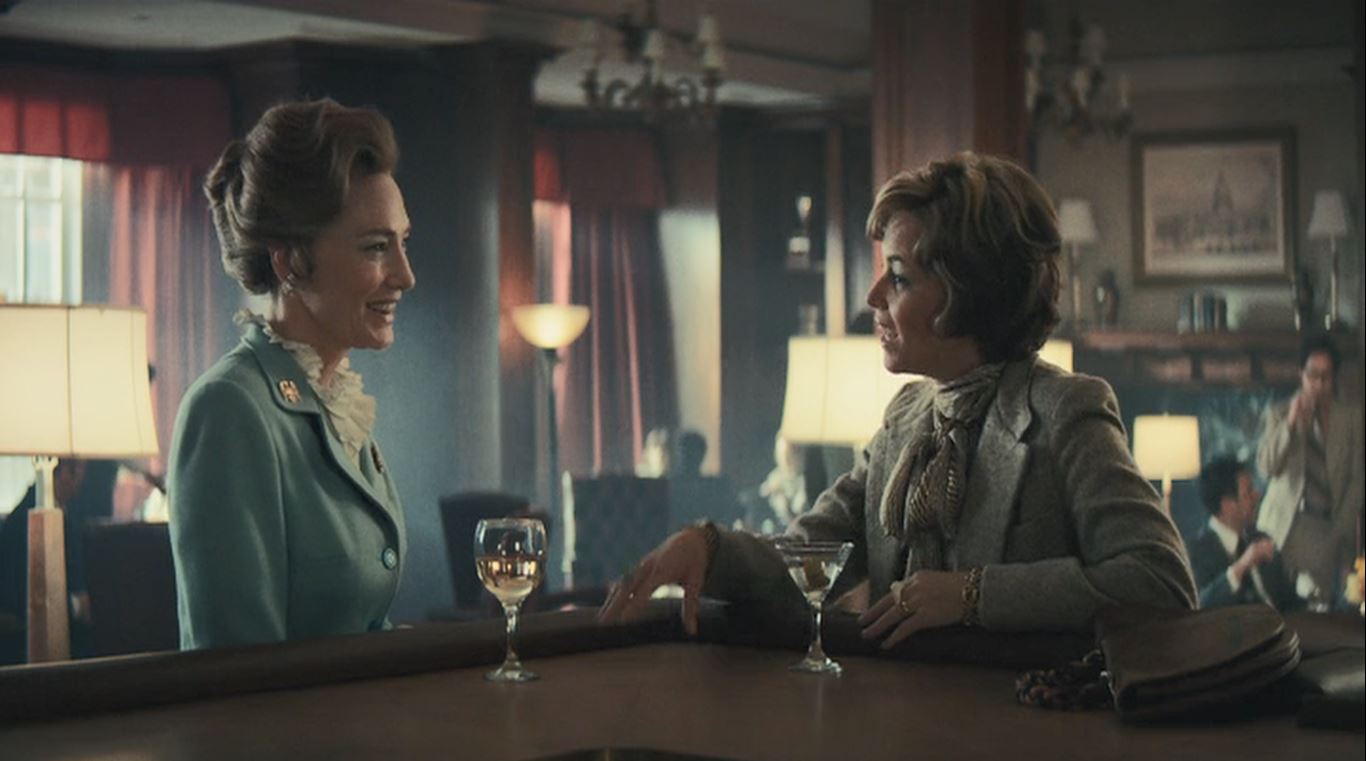 ‘Mrs. America‘ is a Hulu mini-series that tracks the second-wave feminist movement from multiple angles, providing a comprehensive picture of the fight to get the Equal Rights Amendment ratified. The series mainly looks at how a conservative woman named Phyllis Schlafly was able to stop the ERA from being ratified narrowly. However, each episode of the mini-series takes a look at a different woman who was involved in the fight. The sixth episode revolves around the Republican Party politician, Jill Ruckelshaus.

The sixth episode begins with Jill being appointed the chairwoman of a National Commission for women by President Ford. Phyllis Schlafly wants to make a “big splash” at the Republican National Convention since she thinks that Jill is unfairly portrayed as the female face of the party. Jill’s husband, William, takes care of the kids so that Jill can devote more time to her political career. A few secretaries to various Congressmen complain to Shirley Chisholm about being asked to return sexual favors as a part of the job.

Phyllis Schlafly finds out that somebody has been plagiarising her newsletter. When she goes to confront the plagiarist, she finds out that it is a woman who runs a conservative organization called “Women Who Want to be Women” (WWWW). Upon finding out that WWWW has 15,000 members, Schlafly makes an offer to join forces.

Jill sees Schlafly at a bar and starts talking to her. They talk about kids and Kissinger. Jill tells Schlafly that she is using the ERA to get a conservative presidential candidate elected. When Jill speaks about women being sexually harassed at work, Schafly says that promiscuous women invite it. This angers Jill, who leaves.

Chisholm urges Bella to take some action against secretaries being asked sexual favors by Congressmen. However, Bella tells Chisholm that it may not be politically wise to do so right away. William Ruckelshaus is being considered as the Vice Presidential Candidate for Ford in the upcoming election. William wants Jill to keep a low profile at the upcoming Republican National Convention as it could hurt Ford’s chances of gaining enough support against Reagan. Jill begrudgingly agrees.

Phyllis goes to meet the WWWW head again. She convinces her to join forces after agreeing to make her the Vice President of her interest group, Eagle Forum. The WWWW woman tells Schalfly how she does not want abortion to be legalized and homosexual “perverts” to teach children at school. After that, Schlafly goes to church to confess about her biggest “sin:” the fact that her son, John, is a homosexual “pervert.”

Schlafly enters the Republican National Convention with a strong show of support from her followers to take the ERA out of the platform and show support for Ronald Reagan. Jill is informed. Jill desperately reaches out to her network to stop Phyllis. With 51 votes against 47, Jill is able to get the Republican Party to reaffirm its support for the ERA ratification. Schlafly gets invited to Ronald Reagan’s suite to network with his campaign staff.

William is not picked as the Vice Presidential candidate. At Reagan’s suite, Schafly is asked to drop the floor fight against the ERA as it will antagonize delegates on the fence.

‘Mrs. America’ episode 6 turns out to be slightly underwhelming. However, that is mainly due to the expectations of a “showdown” between Ruckelshaus and Schlafly, which does not happen. To be fair to the Hulu mini-series, history cannot be changed. The episode does manage to depict the political intricacies of the time remarkably well, however.

The sixth episode proves to be a much bigger improvement over the third episode that might have felt confusing to several viewers. To be clearer, the sixth episode depicts the politicizing in a crystal clear fashion, without spoon-feeding the viewers. The third episode fails to find that balance and might have been better had it been more expository.

For instance, the growing conservative support for Reagan is quite clear, and so is the political climate, which proves to be challenging for both Jill’s and Schalfly’s views. It is very evident how, due to the upcoming election, there is an atmosphere of trying to appease all sides. Jill is asked to keep a low profile at the Republican National Convention so that Ford does not lose out on support from centrists or undecided conservatives. Meanwhile, Schlafly is asked to drop the floor fight against the ERA so that Reagan does not lose the support of those “on the fence.”

However, the episode might have benefited with more theatrics, for lack of better terminology. For instance, Schlafly marching into the Republican National Convention with her supporters seems to lack the kind of dramatic power that viewers have witnessed previously. Hence, as mentioned earlier, for an episode revolving around Elizabeth Banks, who has been missing from the mini-series otherwise (Rose Byrne as Gloria Steinem is not seen even once during this episode), ‘Jill’ does feel slightly underwhelming, but definitely engaging.

Read More: Who Was Betty Friedan From Mrs. America?