A Lull in the Sea Season 2: Premiere Date, Characters, Plot 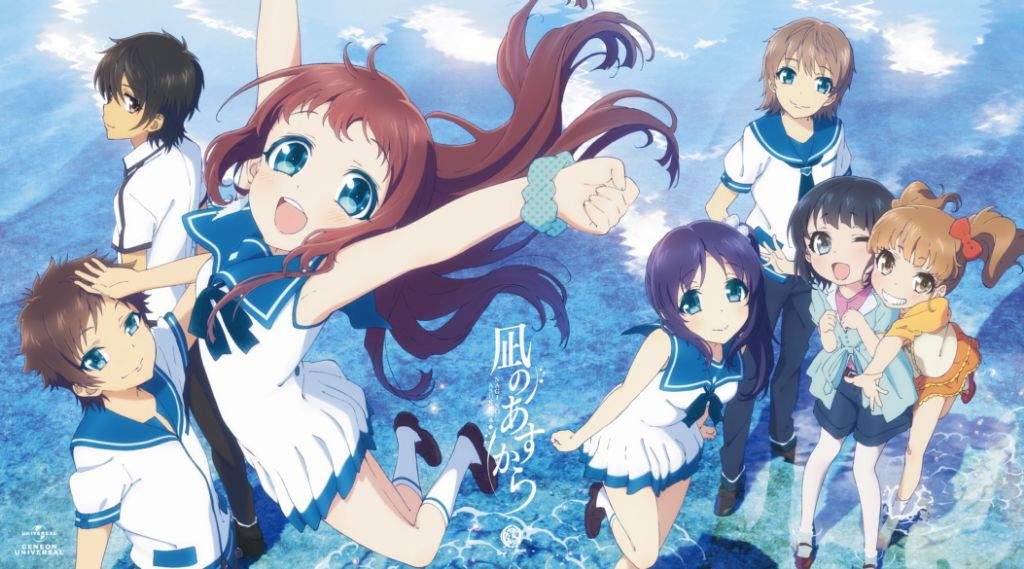 Every once in a while, an anime comes along that completely blows all your expectations out of the water (pun intended) and gives you something that you had never expected out of it. ‘Nagi no Asukara’ is definitely one of those shows and brings something very unique to the table. On the outside, it seems to be another one of those typical high school shows but as its story and visuals start unfolding episode by episode, it climbs its way up to be amongst the best in the genre.

While the main focus of the story goes into the value of friendship, it also touches upon other topics like social acceptance, discrimination, and exceedingly amazing romantic relationships. Speaking of romance, unlike others, ‘Nagi no Asukara’ is very unpredictable and has characters with some really diverse personalities that keep changing over time. Keeping the romance aside, the characters as individuals are brilliant and each and every one of them serves a purpose to the overarching plot.

P.A. Works Studio is known for producing some very well-known anime like ‘Angel Beats‘ and ‘Charlotte‘ but out of all the anime they have worked on, ‘Nagi no Asukara’ by far has the best animation and art style. The visuals are out of this world and the whole environment that includes humans living under the sea and swimming along with other marine creatures is simply phenomenal. The Studio really exceeds all expectations with this one and sets a great example for all anime with futuristic themes. Overall, despite having 26 episodes, you will surely find yourself bingeing on it as it is extremely engaging and entertaining. ‘Nagi no Asukara’ is indeed a gem that is quite unlike any other and I would highly recommend it to everyone out there.

Nagi no Asukara Season 2 Release Date: When will it premiere?

‘Nagi no Asukara’ Season 1 premiered on October 3, 2013 and went on till April 3, 2014. It had a total of 26 episodes. Though the anime has a slightly above rating on most popular platforms, it overall received a lot of mixed reviews from viewers. For some, the anime has been one of the best things they have ever seen while for others, it is nothing but just another typical romance drama. But regardless of that, the show was really popular for a while and a lot of fans were actually expecting a season two.

Being an original series that lacks a source material, its renewal would actually not be much of a big deal for the creators as they were never being held back by a manga or a light novel. But despite the fact that most things were actually in its favor, it never really received a Season 2. Now the show is a little old but it hasn’t reached a point where we would completely dismiss the possibilities of its renewal. So as of now, while there is still a chance of getting more of this anime, we can’t really confirm anything unless the creators give an official green flag. Let’s just hope that there will be some news regarding ‘Nagi no Asukara’ Season 2 release date sometime by the end of 2021 and if there isn’t, then fans might have to move in a different direction.

‘Nagi no Asu kara’ Season 1 is available on Crunchyroll with its original Japanese audio and English subtitles.

A long time ago, the whole human population resided under the sea but later, a few decided to live on the surface and never went back to living underwater again. Because of their disrespect towards the power that they had, the humans living on the surface were stripped of their god-given power called “Ena” that allowed them to breathe underwater. With time, though still in contact, the ones living under the sea became more distant from the ones up above.

‘Nagi no Asu kara’ follows the lives of Hikari Sakishima and Manaka Mukaido, who leave the underwater world behind them to attend school on the surface along with their childhood friends, Chisaki Hiradaira and Kaname Isaki. They later also meet Tsumugu Kihara, a fisherman who absolutely loves the sea. As they live their own lives on the surface, they face the harsh realities of a world that is full of discrimination between the ones who are separated by the surface of a mere water body.

Chisaki is one of the female leads of the anime who is also a student at the Shioshishio. She secretly has a thing for Hikari but never really expresses it to him as she knows that he is in love with Manaka. In appearance, she is a beautiful young girl who is really conscious of her curvy figure and has long wavy purple hair.  She wants her friends to stay the same and never change because she believes that if they change, even their relationship with her will be different.

Manaka is Hikari Sakishima’s childhood best friend who tries her best to stay strong to avoid being prone to crying. She is in love with Hikari but decides to hide her feelings for him because she knew that Chisaki is in love with him. She is a fair-skinned beautiful girl who has long auburn hair and big deep blue eyes. She has a very girly dressing sense. Initially, she is energetic and cheerful but she is still quite indecisive about everything. Later, her character goes through a lot of transformation and she becomes more confident about herself.

Hikari and Manaka have been really good friends since childhood and while growing up, Hikari would take care of her. After spending so much time with her, he falls in love with her but for a very long time, he does not realize that she feels the same for him. In the beginning, he looks at the people on the surface as inferiors for throwing away the power that was given to them by the Sea King. However, later he realizes that everyone is equal and the ones on the surface are no different from the ones who live under the sea.

Kaname Isaki is another one of the four friends from Shioshishio and is very matured compared to his friends. He has a thing for Chisaki and deeply cares for her. He has long light brown hair and like the others from the underwater world, he has blue colored eyes. He prefers to avoid conflicts and even in general, he has a very laid-back attitude about everything.

Tsumugu is a boy from the surface who loves the sea and lives with his fisherman grandfather. One day while fishing, he meets Manaka when she gets caught in his net. He is calm, stoic and is really fascinated by those who live under the sea. He is considered to be quite a handsome young man with his dark brown hair and expressionless eyes. He does not usually talk much and prefers to listen. Even when he does talk, his tone is usually very soft and composed. He really wishes that he was more expressive of his feelings but fails to do so every time he tries to.