Now You See Me 3: Everything We Know 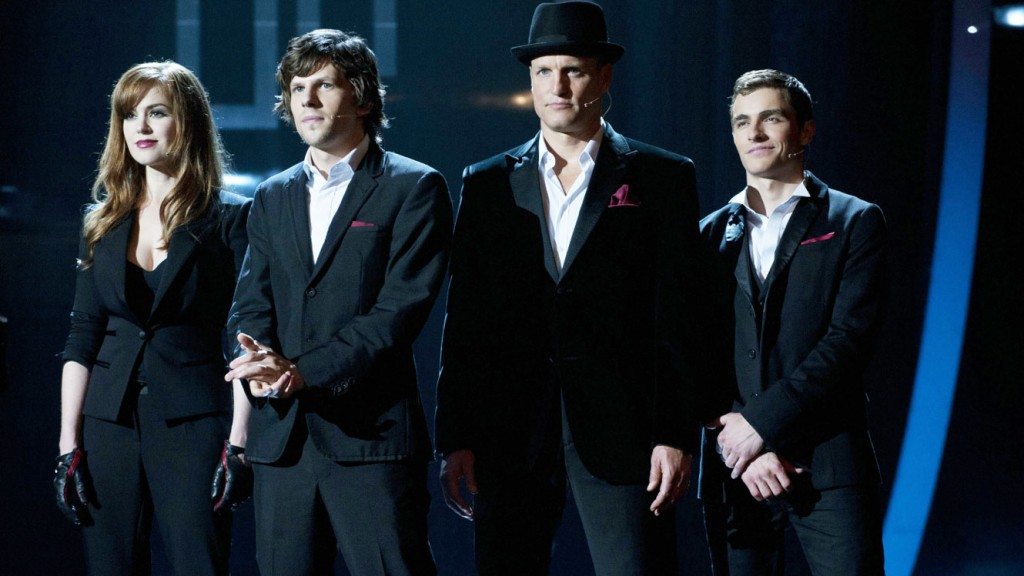 There is something about magic that draws us incredibly close and leaves us enchanted even after we have missed the core of the trick itself. The ‘Now You See Me’ franchise depends on this premise, pulling us in with an intricate plot that is only accentuated with stellar performances from a very talented cast. Just when we are caught up in the tale, the movie introduces twists that leave us agape and wanting for more.

‘Now You See Me‘ introduced us to the Four Horsemen, a team of magicians who pulled off a series of inexplicable tricks, with FBI Special Agent Dylan Rhodes on their tail, determined to pin some crimes on the group. However, through smart misdirection, the Horsemen worked towards a larger purpose, and the movie ended in a twist of showing Rhodes being the secret mentor to the Horsemen. The film ended up making $351.7 million worldwide against a budget of only $75 million. Lionsgate was immediately prompted to come up with a sequel.

‘Now You See Me 2’ saw the Horsemen reunite with a new member. The movie made some excellent cast additions, with Daniel Radcliffe playing the bad guy. Radcliffe’s character tries to exact vengeance on the Horsemen on behalf of his rich father, who was swindled in the first movie. Once again, viewers are treated to a plot that is full of surprises, with monumental magic tricks remaining the chief attraction. Although the movie brought in lesser than the first part, it was still a success grossing $334 million worldwide.

Two consecutive successes usually mean that a franchise is on the way and Lionsgate has not disappointed, having announced in 2015 itself (a year before the second movie) that ‘Now You See Me 3’ is in the pipelines. However, since then details have been few and far between. Although it has been four years, there has been no news about the project being scrapped, leading us to believe that the wheels are turning slowly but surely at Lionsgate. Thus, we bring you everything we know about ‘Now You See Me 3’.

Now You See Me 3 Plot: What Can It Be About?

‘Now You See Me 2’ ended on the surprising note where we learn that Thaddeus Bradley, the staunchest critique of the Horsemen, and someone who exposes magic tricks, is secretly a member of the Eye. He turns out to be Lionel Shrike’s (Dylan’s father) partner and friend. Dylan is taken back upon learning this secret, even as he is put in charge of the Eye.

So, what could ‘Now You See Me 3’ be about? Well, for starters, it will surely bring back the Horsemen, who are the prime attraction of the movies. We could possibly learn more about the Eye, which is a shady historic organization using magic to help people. There have been hints that we will now see real magic, not merely acts of misdirection.

‘Now You See Me 3’ could also be about the history of the organization which unravels and reveals itself with Dylan in charge. There have also been several theories that Dylan’s father, Lionel Shrike, is not dead, and he might reveal himself. Shrike’s body was notably never found, and we can expect a magician of his stature to have a trick up his sleeve. It will be interesting to see Dylan reunite with his father in the upcoming film if Shrike does become a part of the plot.

Like the previous two movies, ‘Now You See Me 3’ will be sure to introduce a chief antagonist who will be going up against the Horsemen. Up until this point, we have seen people who are not attached to the world of magic directly. Thus, it would be refreshing to see a villain practicing magic, who could give the Horsemen a run for their money. Moreover, in both films, the Horsemen have been a step ahead of their opponents due to their art of misdirection. If the antagonist in the upcoming movie could match this, there is a very good chance that we might see the Horsemen in some real danger in ‘Now You See Me 3’, which could definitely make things more exciting.

On that note, perhaps we should briefly mention that a Chinese spinoff to ‘Now You See Me’ is also on the works which will tell the story of Li, the character from the magic shop in Macau, that we see in ‘Now You See Me 2’.

It is surprising that though ‘Now You See Me 3’ was announced back in 2015, no cast members are officially attached to the project. Perhaps they have been keeping it under wraps, but the more likely scenario is that some of them have been busy with other projects.

‘Now You See Me 3’ will surely reunite the Four Horsemen, including Jesse Eisenberg as J. Daniel Atlas and Woody Harrelson as Merritt McKinney. The two have several projects lined up. Perhaps that is why they did not sign on for ‘Now You See Me 3’ yet, but with ‘Zombieland Double Trap’ out of the way, the actors could be turning their attention to the new ‘Now You See Me’ movie next. Dave Franco is also sure to be back as Jack Wilder. As for the fourth Horseman, fans initially thought that the franchise would go with a new female character for each film, but after Lizzy Caplan’s popularity as Lula May, it seems that she is reprising her role in the upcoming movie.

Other notable characters we might expect to be back are Mark Ruffalo’s Dylan Rhodes Shrike and Morgan Freeman’s Thaddeus Bradley. Michael Caine’s character, Arthur Tressler, was arrested at the end of ‘Now You See Me 2’, but there is no reason for him not to return, even if it is a cameo role.

Now for the really big news, there have been rumors that Benedict Cumberbatch is slated to join the cast. Although it remains unconfirmed by anyone in Cumberbatch’s camp, the rumors date back quite a few years. If the ‘Sherlock‘ star does join, he will be playing the chief antagonist in ‘Now You See Me 3’.

Now You See Me 3 Crew: Who Can Be Behind It?

‘Now You See Me 3’ will see Jon M. Chu returning to the director’s chair. Neil Widener and Gavin James are on board to write the script for the upcoming movie. Bobby Cohen is attached to produce along with Alex Kurtzman and Jeb Brody.

Now You See Me 3 Release Date: When Can It Premiere?

‘Now You See Me 3’ was announced way back in 2015. Unlike the first and second movies, which came out within a span of three years, ‘Now You See Me 3’ has been in development for four years already. Moreover, the cast has not been confirmed yet, so we have to wait a little longer for the film to come out. Conservative estimates would suggest that ‘Now You See Me 3’ could come out by 2021 or 2022 if it begins shooting in 2020.

Now You See Me 3 Trailer: