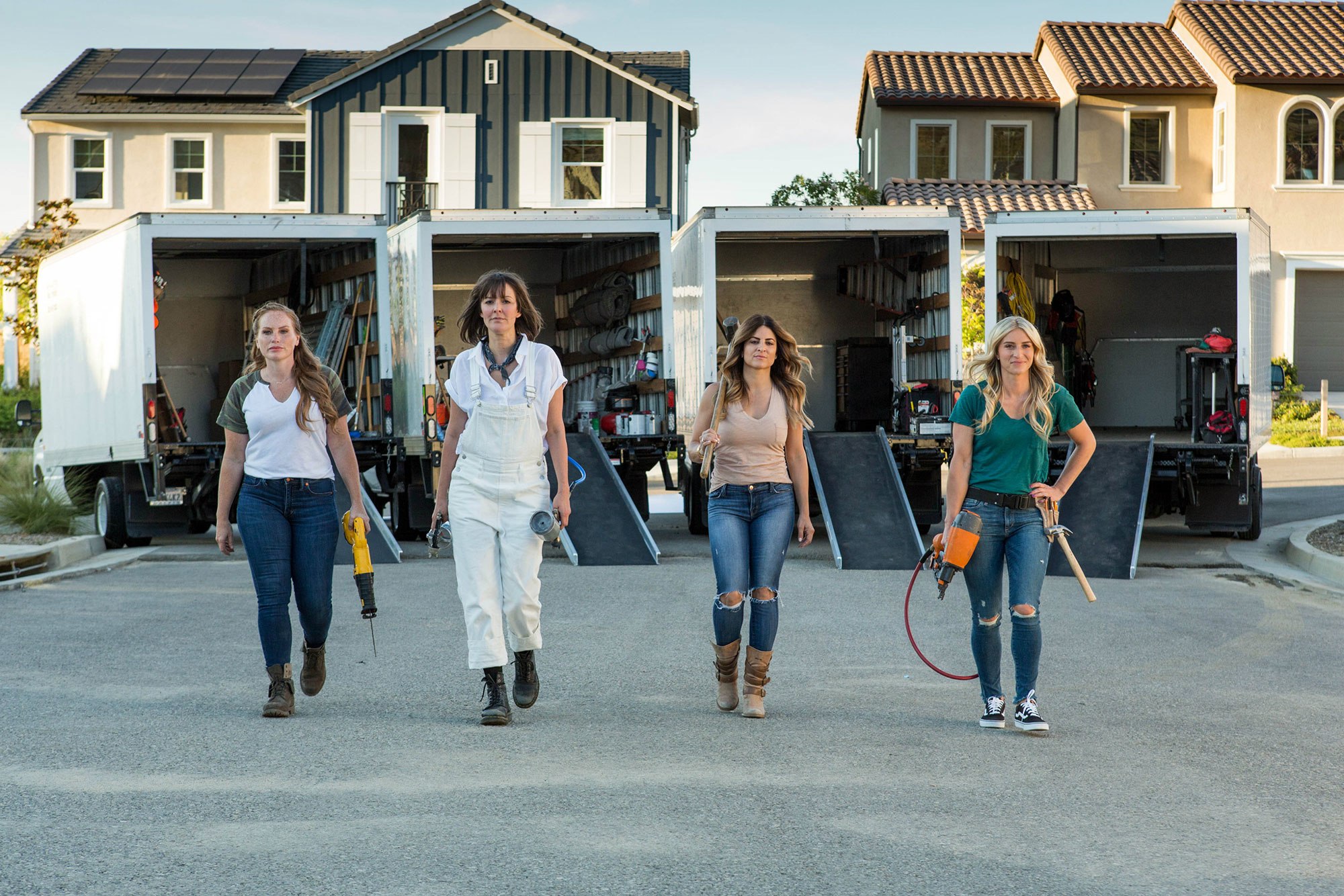 We already know HGTV for its impressive slate of home improvement shows. However, the channel seems to be ramping up its offerings by adding new, unique twists. One such example is ‘Rock the Block’, a reality tv series that brings in the element of fierce competition. It showcases some of the most talented females from the world of home renovation and design, battling one another to be crowned as the next star designer. It pits four extremely skilled women, already featured on other HGTV shows, who engage in the ultimate face-off to renovate identical properties in Los Angeles. The one who adds the maximum value to her assigned project wins the competition.

HGTV president Jane Latman described the show as, “This is a no-holds-barred competition among highly skilled HGTV experts at the top of their game. They’re playing to win, and we can’t wait to see the results of their strategy, creativity, and drive.”

Who is the Host of Rock the Block?

‘Rock the Block’ is hosted by real-estate expert and ‘Property Brothers‘ star Drew Scott. He is joined by a team of four female home-renovation experts, engaging in an extreme showdown to win the interior-design battle.

Chicago-native Alison Victoria features on the HGTV series ‘Windy City Flip’. She has previously appeared on DIY Network’s ‘Kitchen Crashers’, making a name for herself as the first female host on the famed ‘Crashers’ franchise. She is the founder and president of Alison Victoria Interiors, which has branches in Chicago and Las Vegas. Alison’s USP lies in her ability to create chic, contemporary interiors and she boasts a client list of elite boutiques, resorts, and private residences. Alison had also founded Alison Victoria Collection, a group that deals in luxury furniture.

Leanne Ford, alongside her brother Steve Ford, is famous in Pittsburgh for giving new life to old, run-down properties. Interior designer Leanne is known for her ability to create never-seen-before custom designs. She appears on HGTV’s ‘Restored by the Fords’ and her signature style, as described in her own words, is “modern yet lived-in” aesthetic. Leanne’s achievements have made to the front pages of multiple leading national publications such as Architectural Digest, Martha Stewart and The New York Times, among others.

Jasmine Roth from ‘Hidden Potential‘ fame excels in lending distinct interior looks to properties that look the same from the outside. She uses her smart skills to transform homes from cookie-cutter to custom-made havens. According to her, any home should reflect the taste and style of its respective owner. Rounding up the participants is Mina Starsiak Hawk, who appears alongside her mother on ‘Good Bones‘. Mina is a real estate agent and she is a renowned name in the Indianapolis-based home renovation business. She concentrates on one house at a time, purchases homes that need serious overhauls, and starts from scratch to give these properties a complete makeover.

Apart from Drew and the four contestants, there are multiple guest judges across the episodes, including Mike Holmes who evaluates the kitchens; Brian and Mika Kleinschmidt who evaluate the rooms and outdoor living spaces. Other HGTV guest stars include Nicole Curtis, Tiffany Brooks, and Tarek El Moussa, to name a few.

What is Rock the Block About?

‘Rock The Block’ follows HGTV’s top reno experts as they engage in a fierce head-to-head competition. The show spans four weeks and each designer is given a budget of $150,000. Leanne Ford, Jasmine Roth, Mina Starsiak, and Alison Victoria are assigned identical suburban properties, which are located side-by-side in the Greater Los Angeles area. Their task is to transform these bleak properties into customized, extravagant havens. ‘Rock the Block’ showcases the signature style of each artist and finally, shortlists the designer who adds the maximum value to her property. She is crowned as the winner and even gets a street named after her!

In one episode, the designers need to overhaul their respective master suites. While Leanne curates a huge his-and-hers bathroom, Alison designs her bedroom with glamorous black and gold touches. Jasmine creates an airy, livable space, whereas Mina uses her ideas to transform the walls and shower panels. Next, the designers need to tackle the kitchen. Leanne concentrates on the upper cabinets and Alison focuses on modern, high-end appliances. Mina goes for extra storage areas and Jasmine thinks about designing a central focal point. In another episode, the women have to take up the great rooms and backyard living spaces. While Alison chooses lush, outdoor features, Mina highlights her love for fireplaces. Jasmine goes for a built-in pool and Leanne decides on an outdoor fire pit.

After each of these rounds, at the end of four weeks, a crew of real estate experts carries out a comprehensive inspection of the newly renovated homes and then declares the winner.

‘Rock the Block’ is a spectacular show because it throws the limelight on some of the best designers and renovators in the market. The houses are like blank canvas, giving them endless possibilities to use their creativity.

Rock the Block Season 1 Release Date: When will it premiere?

‘Rock the Block’ season 1 premieres on HGTV on October 21, 2019, at 8/9c. New episodes release every Monday at the same time slot.

You can watch the official trailer for ‘Rock the Block’ season 1 below. You can also head to their official site if you wish to check out clips from the show.