Smiley Ending, Explained: What Happens Between Bruno and Àlex? 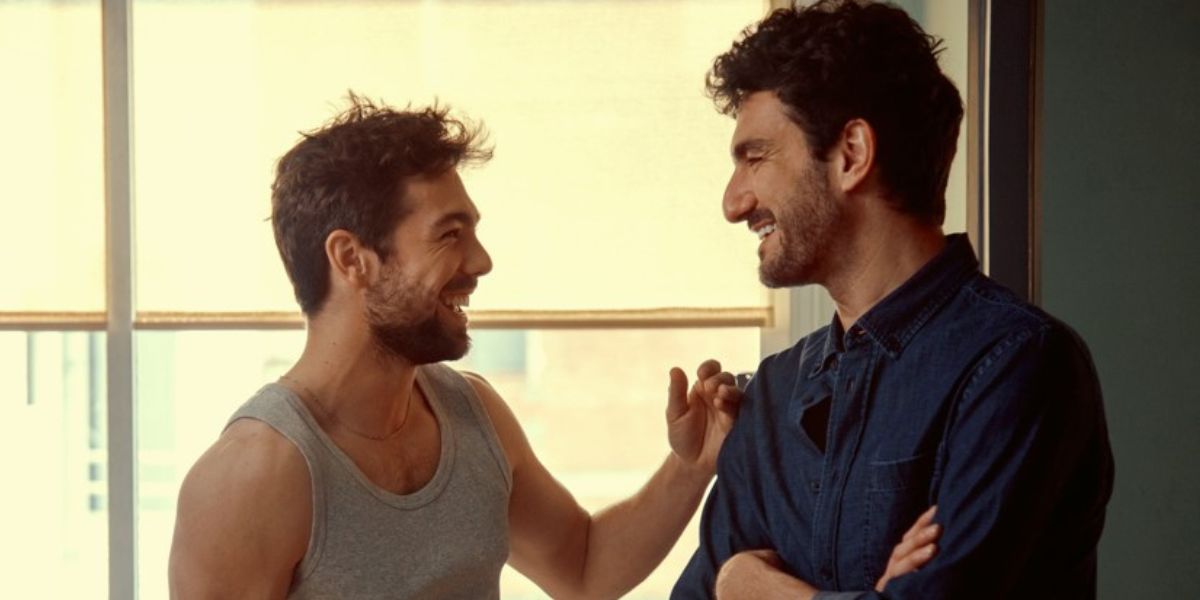 Based on the eponymous play, Netflix’s ‘Smiley’ is a Spanish romantic comedy series that centers on Àlex and Bruno. Àlex and Bruno’s paths cross when the former dials the latter’s number by mistake. After Àlex vents out his emotions, thinking he’s talking to his ex, Bruno decides he wants to meet the man. The two hopeless romantics meet and find out that they are polar opposites and not suitable for each other. As Àlex and Bruno search for an honest and long-lasting relationship, they realize it has been in front of them all along.

The eight-episode series also involves people around the two lead characters, and we see how their arcs unfold. As the narrative progresses, we understand how each person in the story perceives love differently and how everyone’s journey is unique. Àlex and Bruno’s paths cross several times during the show, making us wonder if they will get together. Here’s everything you need to know about the ending of ‘Smiley.’ SPOILERS AHEAD!

In the beginning, when Àlex and Bruno meet, they cannot have a great conversation. Bruno talks about cinema, rom-com, and architecture, but Àlex talks about gyms and exercising. Àlex feels insecure because of Bruno’s intelligence and emotional depth, whereas Bruno becomes self-conscious of his own body after seeing Àlex’s ripped muscles. The two argue about the same but end up sleeping with each other. The following day, both imagine how much they enjoyed the previous night, but neither can openly admit it. When Bruno leaves Àlex’s place, he texts the latter. After Àlex doesn’t reply for a few days, Bruno deletes the text, which makes Àlex insecure.

Meanwhile, we also see Àlex’s friend Vero and her girlfriend Patri in their new apartment, which is currently being renovated. The two have been a couple for seven years and are taking the next big step by buying an apartment together. Following this, we discover that Vero has a job offer to become the VIP manager of Amnesia, a club in Ibiza. Patri finds out about the offer through someone else and becomes upset because Vero didn’t tell her about it. Vero rejects the job offer, but Patri understands that the two must work on their communication as a couple. As the two start doing different couple exercises, Patri learns that Vero wants an open relationship. The only condition is that the two can sleep with anyone as long as they do it together.

As days pass, Àlex starts seeing another guy named Ibra but finds out that he doesn’t want anything more than a physical relationship. One of Bruno’s colleagues, Ramon, shows interest in Bruno, but the latter doesn’t seem keen on the idea. Eventually, Àlex gets together with Ibra, and Bruno starts dating Ramon. Elsewhere, Vero and Patri sleep with Flor and form a new bond with their friend. Things become complicated when Patri’s parents surprise her for Christmas. Patri gets scared because her parents don’t know about her sexuality and asks Vero to move out until her parents leave. Vero gets angry because she feels insulted and gets back at her girlfriend by revealing Patri’s truth.

The two women fight, and later, Vero is approached by the same woman who offered her the job earlier. Vero reconsiders everything and almost sleeps with the woman but decides against it. Following this, she learns that Vero might have slept with Flor on her own and feels betrayed. Àlex and Bruno’s paths cross again, and despite having boyfriends, the two feel a strange connection. So what happens with these four people? Do Àlex and Bruno get together? Do Vero and Patri separate? Let us find out!

Smiley Ending: What Happens Between Bruno and Àlex?

Àlex and Bruno get together in the end after the former confesses his feelings for the latter. Àlex explains how he should not have let Bruno leave after they had sex for the first time. At the very least, Àlex should have called or texted Bruno once he left, but he didn’t. Àlex expresses his regrets and says that even if he and Bruno stay with Ibra and Ramon, he doesn’t want to leave things unsaid. Àlex expresses these thoughts and emotions while he’s in a taxi on the way to the airport.

As soon as Bruno hears the voice message, he goes to the airport but doesn’t find Àlex. Bruno even sends a text message but doesn’t get any reply. After the plane to Senegal leaves, Bruno returns to his place and finds Àlex outside the house. The two confess that they broke up with their partners and express their love for each other. Àlex and Bruno give their relationship a fair chance, despite their incompatibility in hobbies and tastes. As the show ends, we find out that Bruno sends the “Smiley” emoji to Àlex, which is all the latter needs to know he wants to be with Bruno and nobody else.

All themes in the series tie up perfectly toward the end and indicate how Àlex and Bruno are meant to be together. The first theme is connected with the “Smiley” emoji Bruno sends Àlex. In the show’s first scene, Àlex sends the “Smiley” emoji to one of the guys he has been seeing for a while. Although it’s a simple emoji, to Àlex, it means everything.

Through the “Smiley,” Àlex tries to express that he likes the person and feels comfortable with him. Àlex likes how the two enjoy similar things and how he feels loved just the way he is. Àlex can think of really cheesy things to do and say with the man and hopes that all of that becomes true one day. In essence, with just one “Smiley,” Àlex wants to convey that he has found the man he wants to spend the rest of his life with. 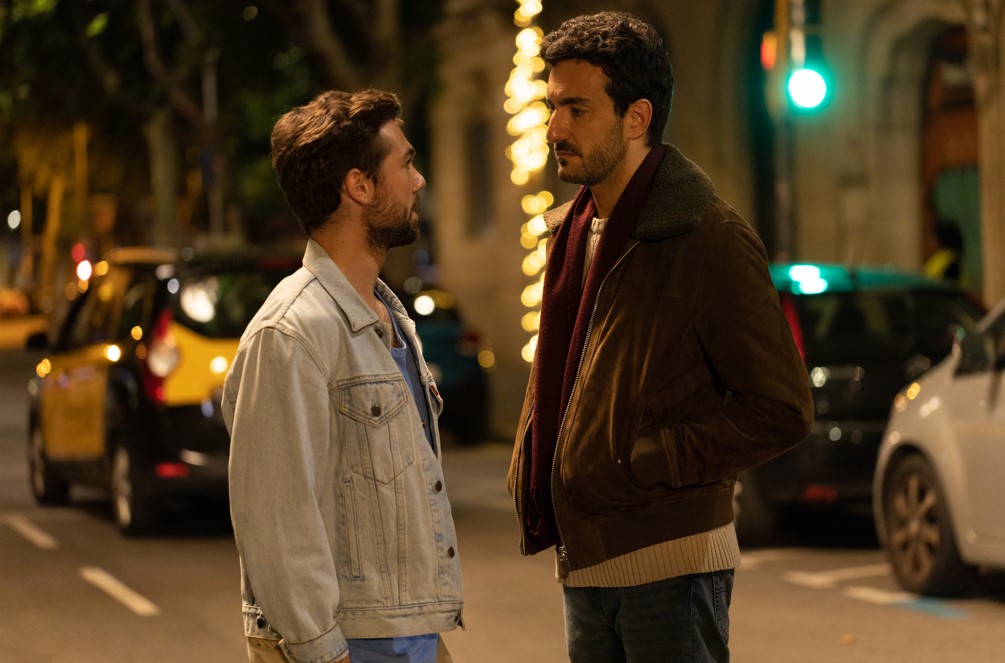 The second motif is the film ‘Bringing Up Baby,’ by Howard Hawks. The movie is one of Bruno’s favorite romantic comedies, and it’s the only one Àlex remembers. In many ways, ‘Bringing Up Baby’ symbolizes Àlex and Bruno’s relationship and even foreshadows that they will end up together. For instance, Cary Grant and Katharine Hepburn’s characters are opposites and have nothing in common. The same is true for Àlex and Bruno. The movie also has a song called ‘I can’t give you anything but love,’ which was mistranslated into Spanish as ‘I can give you anything but love.’ The translated title can sum up Àlex and Bruno’s initial dynamic, but by the end, their relationship is the epitome of the song’s actual name.

The third symbolic element is Àlex’s dream of the red thread. He envisions a red thread tied to his little finger, which takes him to a black gate, and when he pulls the string, he sees that it has a loose end. The dream makes Àlex uncomfortable because he feels like he’s missing something, which prompts him to call Bruno in the end. The two get together by the end, leaving us wondering what the red thread means.

What Does the Red Thread in Àlex’s Dream Mean?

The red thread in Àlex’s dream symbolizes the eternal connection between Àlex and Bruno. It means that the two are destined to be together forever. When Àlex talks to Bruno on the phone for the first time, the latter mentions the legend of the red thread of destiny. According to the fable, people meant to be together are connected by an invisible red thread that is forever tied to the two people’s little fingers and never breaks.

As the narrative progresses, Àlex slowly understands his feelings toward Bruno and wants to confess them. However, the timing never seems to be right. In the final episode, Àlex gets dreams wherein his little finger is tied to the red thread. Àlex follows it, sees different people from his life, and ends up outside a black get. When he sees the loose end, he feels restless because he subconsciously thinks he is meant to be with no one. Although Àlex doesn’t consciously realize that Bruno told him the story, his gut feeling makes him call Bruno.

Àlex is with Ibra but doesn’t feel the same connection as he does with Bruno. But when Àlex sees Bruno outside his house, he sees the same black gate and feels like he’s in the right place. Àlex feels like he belongs with Bruno despite their differences. Thus, we understand that the symbolic red thread is tied to Àlex and Bruno, signifying that their relationship will last forever.

Do Patri and Vero Separate?

Patri and Vero separate because they realize that the latter isn’t happy with the former. When the couple gets the mortgage for their new house, they are excited, but Vero soon learns that she wants something else. Unable to express this, Vero tries to get another job in Ibiza and gets into an open relationship. Vero tries to communicate how she doesn’t want to feel restricted through these actions. Patri understands this at the end when the new house is complete, and she feels like something is missing.

Following this, Patri tells Vero that it is okay to want something else. She uses the lemon plant she got for Vero as a metaphor. Patri explains that love is merely the seed. What matters is how a couple nurtures the plant and uses its fruits. Vero figures that Patri is correct but does not accept it. Vero holds Patri’s hands, and we see the line tattoo on the former’s fingers. When Patri and Vero interlock their fingers, it looks as if the line tattoo is broken. The image symbolizes Patri is getting in the way of Vero’s ambitions and goals. Following this, Patri cuts the lemon from the plant and uses it in a cocktail. She and Vero drink a sip to honor their relationship and say goodbye to each other.

Read More: Is Netflix’s Smiley Based on a True Story?