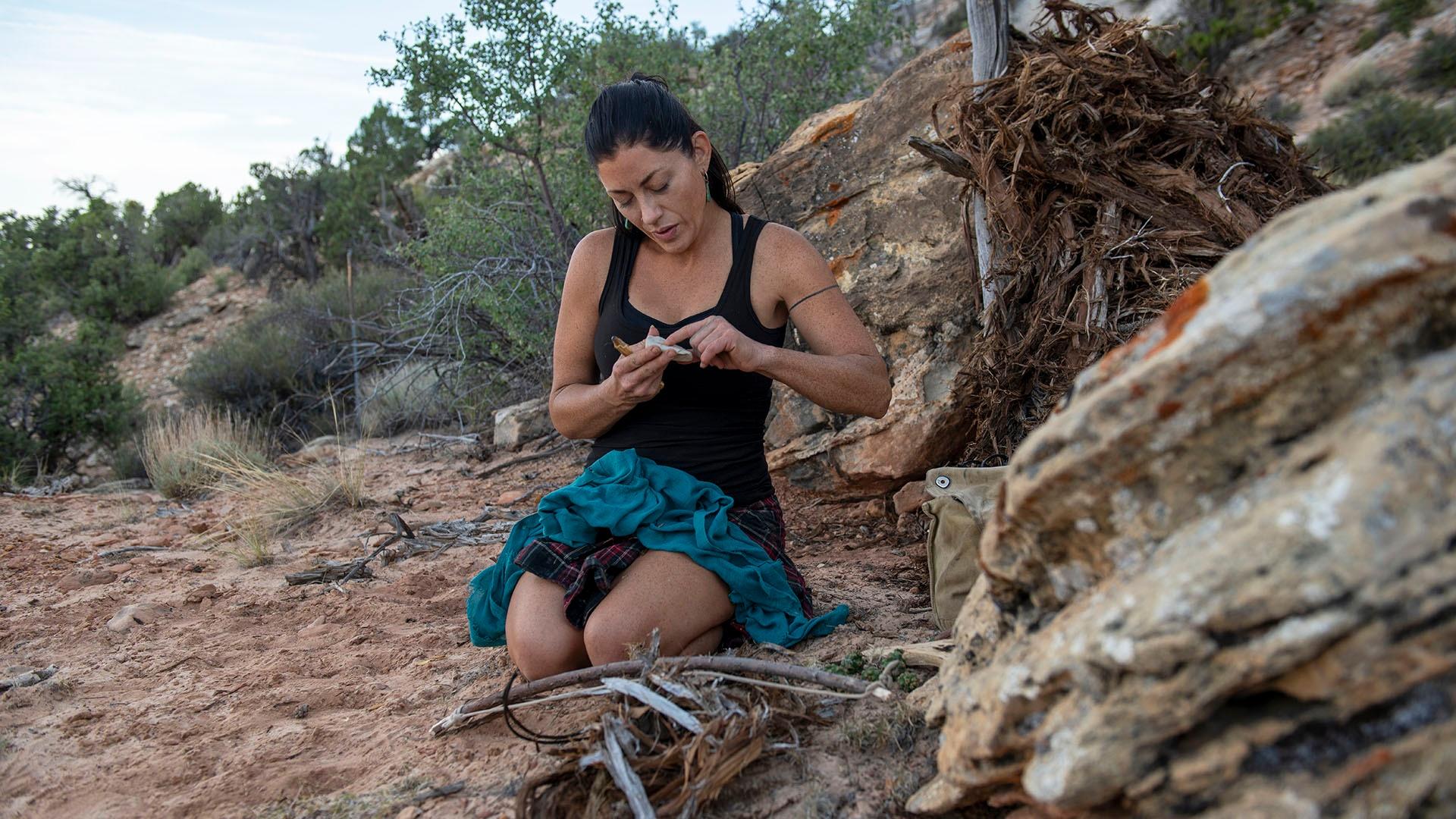 If you are a fan of survival shows and an adventurer yourself, you must be familiar with Cat Bigney. She is a professional survival instructor and TV host for several networks and has featured in numerous survival reality TV shows like ‘The Island with Bear Grylls,’ ‘Ed Stafford: First Man Out,’ and ‘The Great Human Race.’ However, in Netflix’s survival-based reality show ‘Snowflake Mountain,’ she works behind the scenes as the survival educator for the contestants.

‘Snowflake Mountain’ follows a bunch of spoilt kidults sent to a wilderness survival retreat in an attempt to bring them closer to nature and themselves. Regardless of how light or comical the reality show is, it is still a survival-based series that can bring unexpected challenges in the wilderness. This is why Cat Bigney accompanies the participants in the show, just in case her assistance is required. Are you curious to learn more about her? Well, here are all the details!

Hailing from the Wasatch Mountains of Utah, Cat Bigney was born to Nicholas and Sue Bigney and grew up in a close-knit family; she shares a great bond with her parents and siblings to this day. Since her younger days, she had a great affinity for the adventures in the outdoors and possibly started following the path of her choice by completing her Bachelor’s degree in Behavioral Science from Utah Valley University, with a focus on Anthropology and Geology. 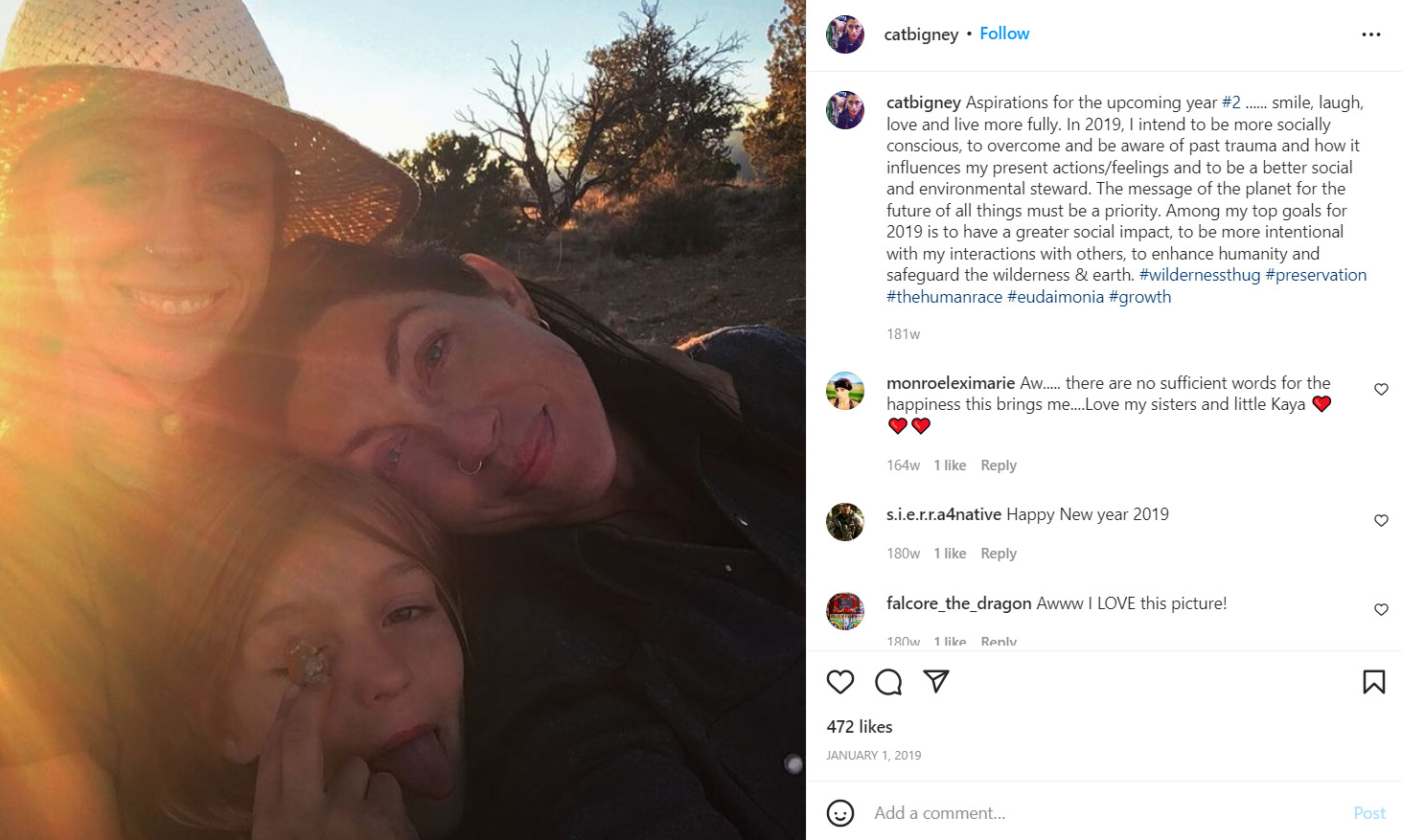 Over the years, Cat’s fondness and interest in wilderness medicine and ways to improvise have only increased, especially after she joined BOSS (Boulder Outdoor Survival School) back in 2000, where she works as a Head Wilderness Survival Instructor. Her primary purpose in going to the survival school was to reconnect with nature and find herself in the process.

After graduation, Cat Bigney worked as an Administrative Assistant to the Geographical and Behavioral Science department professor at her alma mater from 2004-2008. In addition, she joined National Outdoor Leadership School (NOLS) in 2010 and served there for a decade as a Wilderness Medicine Instructor. Meanwhile, her love for contact sports motivated her to participate in several sports, including water polo, football, and even rugby. 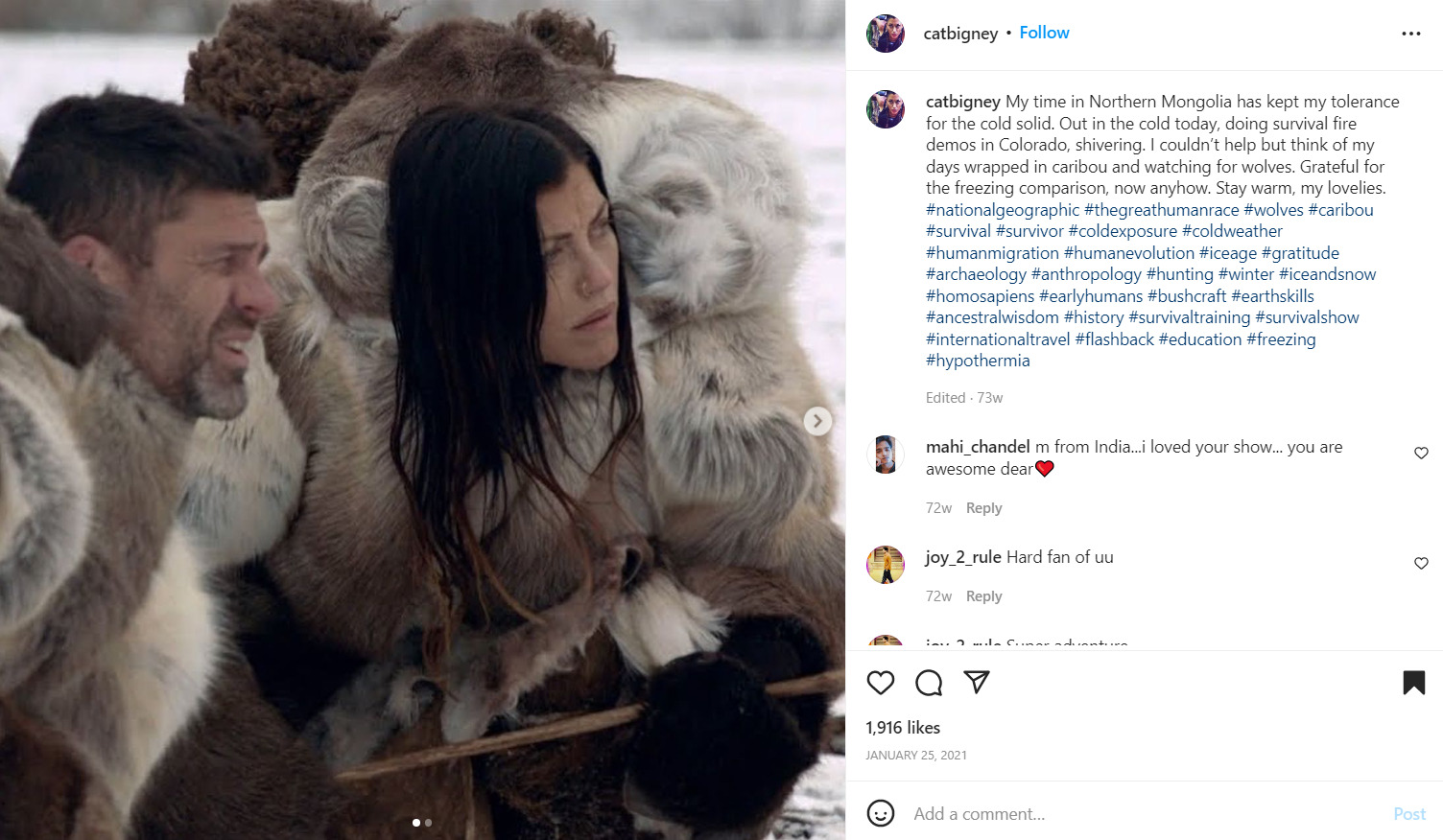 In 2014, Cat Bigney’s television endeavor began as a Consultant in Shine TV, a British media company. As mentioned above, she has also featured alongside Bear Grylls as a Survival Consultant on ‘The Island with Bear Grylls.’ and as a presenter on Discovery Channel’s ‘Bushcraft Build-Off.’ Given her experience and expertise in the field, she later joined the team of the National Geographic Channel as a Researcher and Prehistoric Survival Educator. In 2017, she joined the United Global Natives as Director. 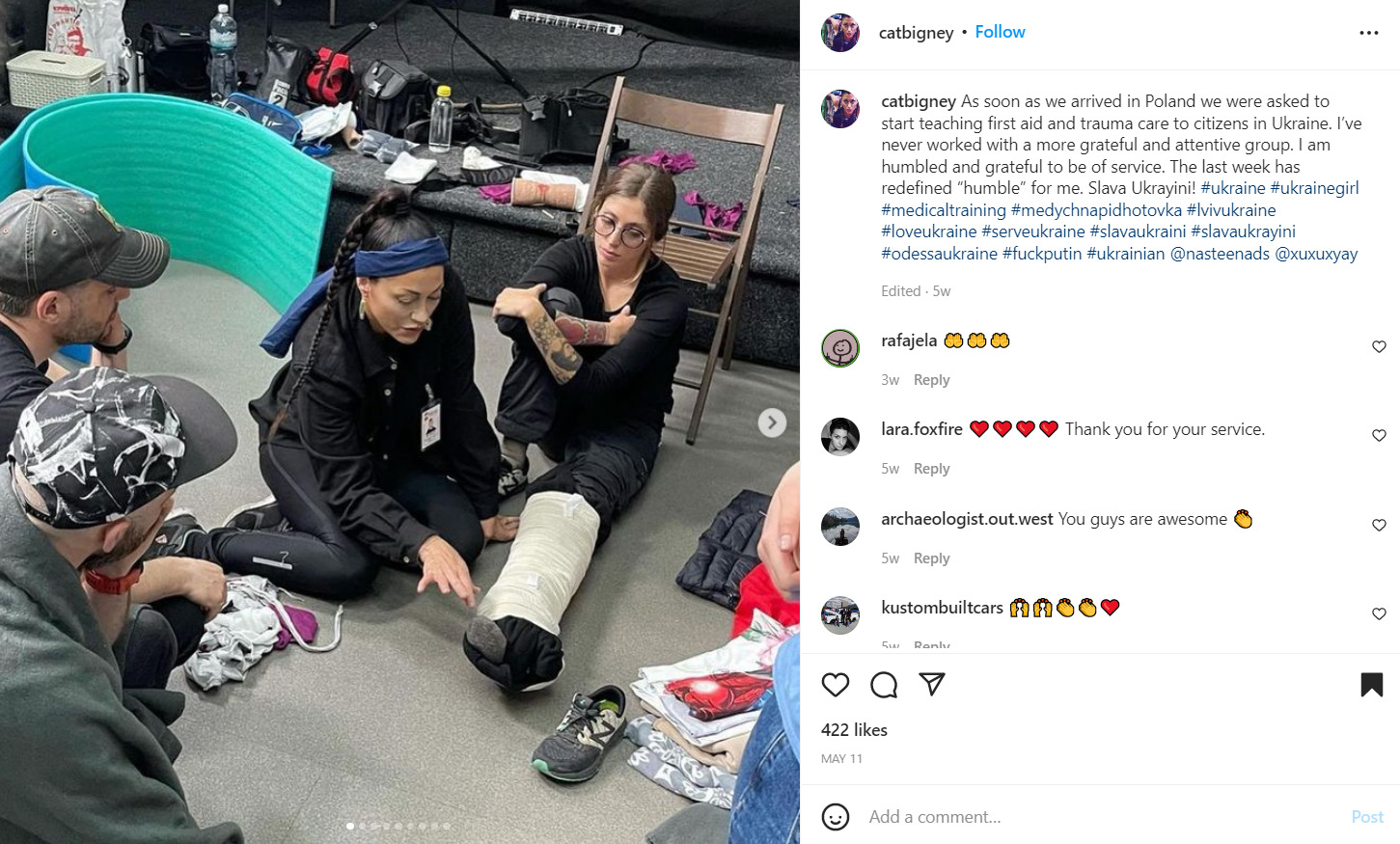 In addition to appearing in the survival show ‘Ed Stafford: First Man Out,’ Cat showcased her knowledge and prowess on PBS’ ‘Human: The World Within.’ Currently, Cat is the Head Survival Instructor at Boulder Outdoor Survival School, where she teaches and shares her skills and experience with her students. Apart from that, Cat has been hosting and appearing in many survival and anthropology TV shows. Moreover, amidst the war between Russia and Ukraine, Cat visited the latter in May 2022 and taught improvisation trauma care and first aid to the citizens of Ukraine.

Is Cat Bigney Dating Anyone? 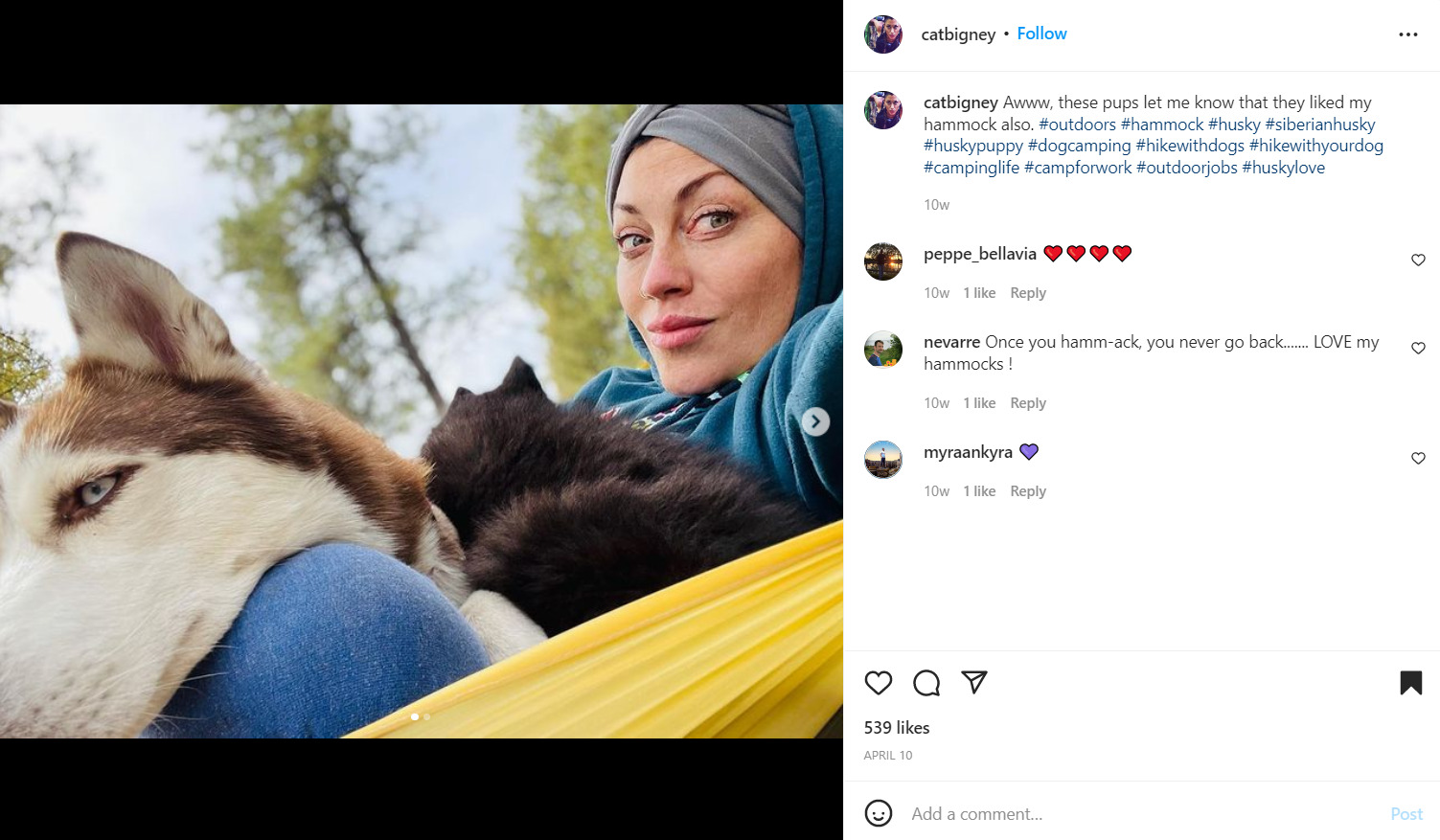 Cat Bigney prefers to keep her personal life under wraps, thus, very little is known about her personal life, especially if she is involved with someone romantically on not. But we can tell you that she does have two gorgeous dogs who usually accompany her during her travels. So, it is fair to say that she lets her followers on social media get a glimpse into her life as she regularly posts about her daily activities. 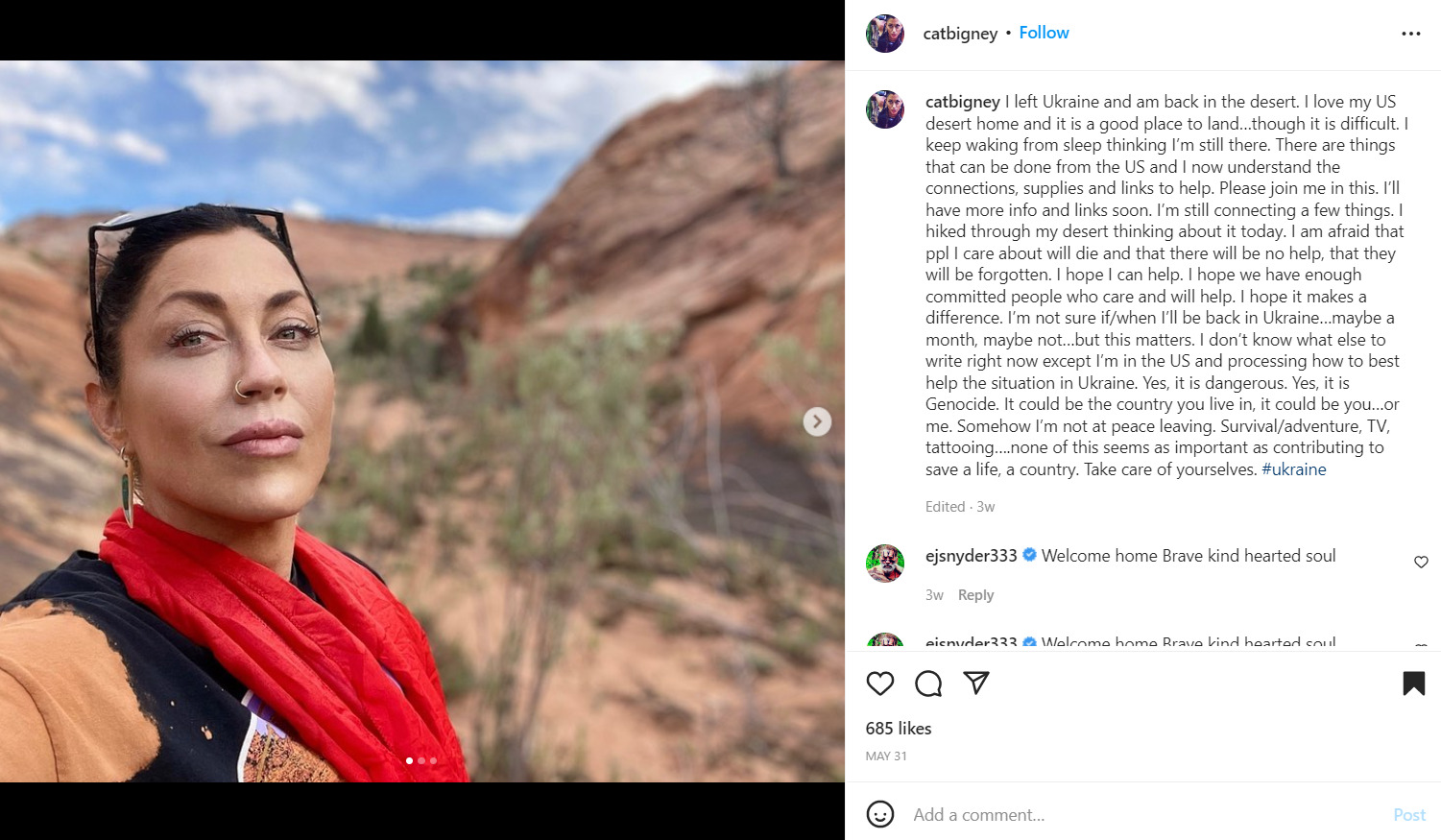 After spending some time in Ukraine, Cat returned to her desert home to put everything she saw in the war zone into perspective. She started doing her part by helping Ukrainians from the US through the connections she made and urged her fans and followers to do the same. Cat has also shared her passion for archaeology with her fans by appearing as a guest on the podcast ‘Archaic World,’ where she discussed the subject with her friend Brian Franklin. So, even though she doesn’t let her fans in on the details of her personal life, Cat tends to share her travel stories openly.