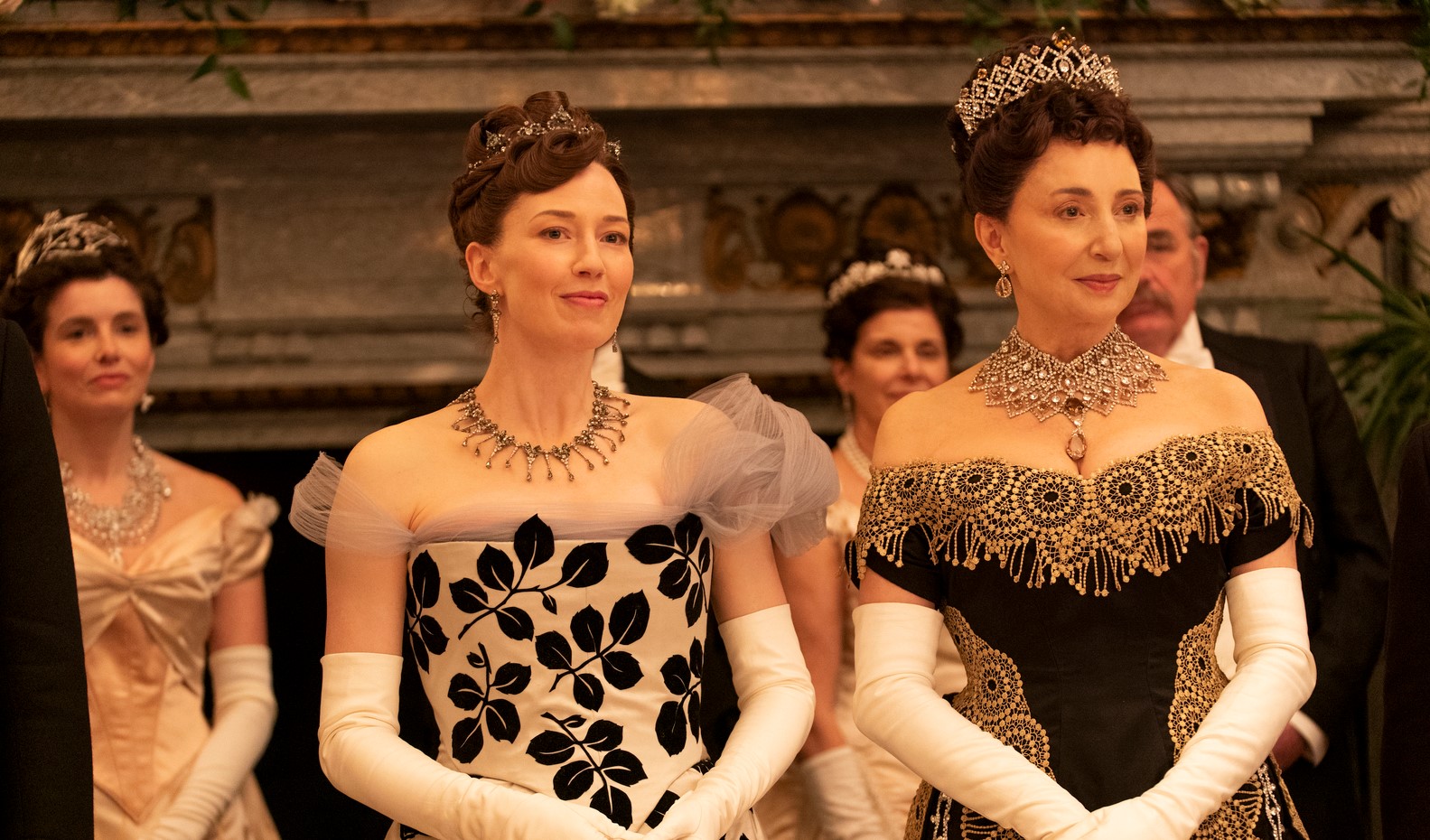 As the first season of ‘The Gilded Age’ comes to an end, various characters face turning points in their respective lives. Marian’s (Louisa Jacobson) plan to elope with Raikes (Thomas Cocquerel) encounters the issues that her well-wishers have feared. As Peggy (Denée Benton) returns to Brooklyn, she learns that her father has hidden something very important from her. After the insult she suffered in the previous episode, Bertha becomes even more determined to establish her family in the New York polite society, deciding to enter a direct feud with Mrs. Astor, and her ball becomes the battleground.

Larry (Harry Richardson) has all but convinced his father about letting him pursue a career in architecture. Monsieur Baudin is revealed to be not who he says he is. Meanwhile, Oscar (Blake Ritson) decides to make the best of his chances with Gladys at the ball, where the latter finally comes out in society. Here is everything you need to know about the ending of ‘The Gilded Age’ season 1. SPOILERS AHEAD.

In the season 1 finale, titled ‘Let the Tournament Begin,’ Marian prepares to elope with Raikes. Everyone around her has reservations about the young man, not just Agnes (Christine Baranski). Because of her naivety, Marian holds on to the belief that he will marry her just as he has promised. Ada (Cynthia Nixon) figures out that her niece is running away. Although she desperately wants her not to do that, she doesn’t stop the younger woman.

Meanwhile, at the Scott household, a member of the house staff finds a note in one of Arthur’s pockets and gives it to Dorothy. When she reads it, she is visibly shaken by its content. When Peggy returns home, she informs her daughter about it. Peggy immediately starts to fall apart, realizing the extent of what her father hid from her.

As Gladys and Carrie prepare their dance for the ball, Bertha visits Mrs. Astor’s home to personally invite her to the ball. However, she is told that Mrs. Astor isn’t there and sent back from the door. When she sees another person being let in, she realizes that Mrs. Astor doesn’t want to meet her. Just like her husband, Bertha can be incredibly ruthless when she needs to be. She returns home and tells her family that they are removing Carrie from the list of dancers.

The mysterious woman Baudin has been seen speaking to turns out to be his estranged wife. After learning that he now works for the Russells, she has come seeking reconciliation. She does have certain leverage over Baudin, so he does the only reasonable thing left for him to do and speaks to George (Morgan Spector), admitting that he is not really French. He is Josh Bourdain, originally from Wichita, Kansas. Josh worked as a seaman for a while, eventually making his way to Cannes. There, he began working at a restaurant and eventually received all the necessary training.

When he came to New York, he discovered that no one wanted to hire a chef from Wichita. So, he conjured up a French identity and taught himself to speak in a fake French accent. By the time he joined the staff of the Russell household, the masquerade had gone on for a while. Although Bertha fires him, he comes through for the Russells when his replacement becomes drunk on the day of the ball. Afterward, Bertha and George reinstate him.

Yes, Raikes and Marian part ways, seemingly for good, in the season 1 finale of ‘The Gilded Age.’ After Marian leaves the van Rhijn household, she heads to Mrs. Chamberlain’s home, where she is supposed to meet Raikes. Earlier, Peggy took her luggage there. Hours pass by, and there is no sign of Raikes.

Meanwhile, sometime after her departure, a distraught Aurora comes to her aunt’s home in search of Marian. She saw Raikes at the opera, cozying up with Cissie Bingham. Aurora eventually finds Marian and tells her what she saw. And even then, Marian has a hard time believing that Raikes would betray her in such a way. She later visits Raikes’ office and finds him there.

And every skeptic opinion that Marian’s well-wishers have about Raikes turns out to be true. He is indeed an adventurer and ruthless social climber. Now that he has had a taste of the polite society, he has no intention to remove himself from it. There is no reason to disbelieve him when he says that he had genuine feelings for Marian. However, ambition and pursuit of wealth apparently have become more important to him than love.

What Happened to Peggy’s Child?

In episode 8, Peggy reveals to Marian that she was married and pregnant once. Her father nullified the marriage, and the baby died shortly after birth. In the season 1 finale, Peggy discovers that her son is alive from the note found in her father’s pocket. When he returns home, Peggy and her mother confront him. Arthur thought he was freeing his daughter and his grandson from a life of shame. He then ensured that the child would have a good life by getting him adopted. Peggy pleads for him to tell her where her son is, but Arthur refuses to divulge that information. The only thing Peggy knows is that her son is in Philadelphia. As the season ends, she and her mother intend to travel there and look for the boy.

Yes, Mrs. Astor attends Bertha Russell’s ball. She is convinced to do so by her daughter, Carrie. After her removal from the dance, Carrie doesn’t blame Bertha for it. Instead, she urges her mother to make peace with Bertha. Mrs. Astor is the embodiment of old-money privilege. But even she realizes that she can’t just keep the door shut to the new members. As Ward McAllister reminds her, the hopefuls will form their own circles and keep them out if they continue to do that. As per Bertha’s request, Mrs. Astor ensures that other old-money people attend the party. This includes Ada and Agnes, who were particularly mentioned by Bertha.

In the pilot episode, no one of note attended the party that Bertha organized. In the intermediate period, she and George have found ways to drastically change that. Although she still might face some antagonism in the future, she has managed to firmly establish her family in the New York polite society.