The Legend of Vox Machina Finale Ending, Explained: Is Orthax Dead or Alive? 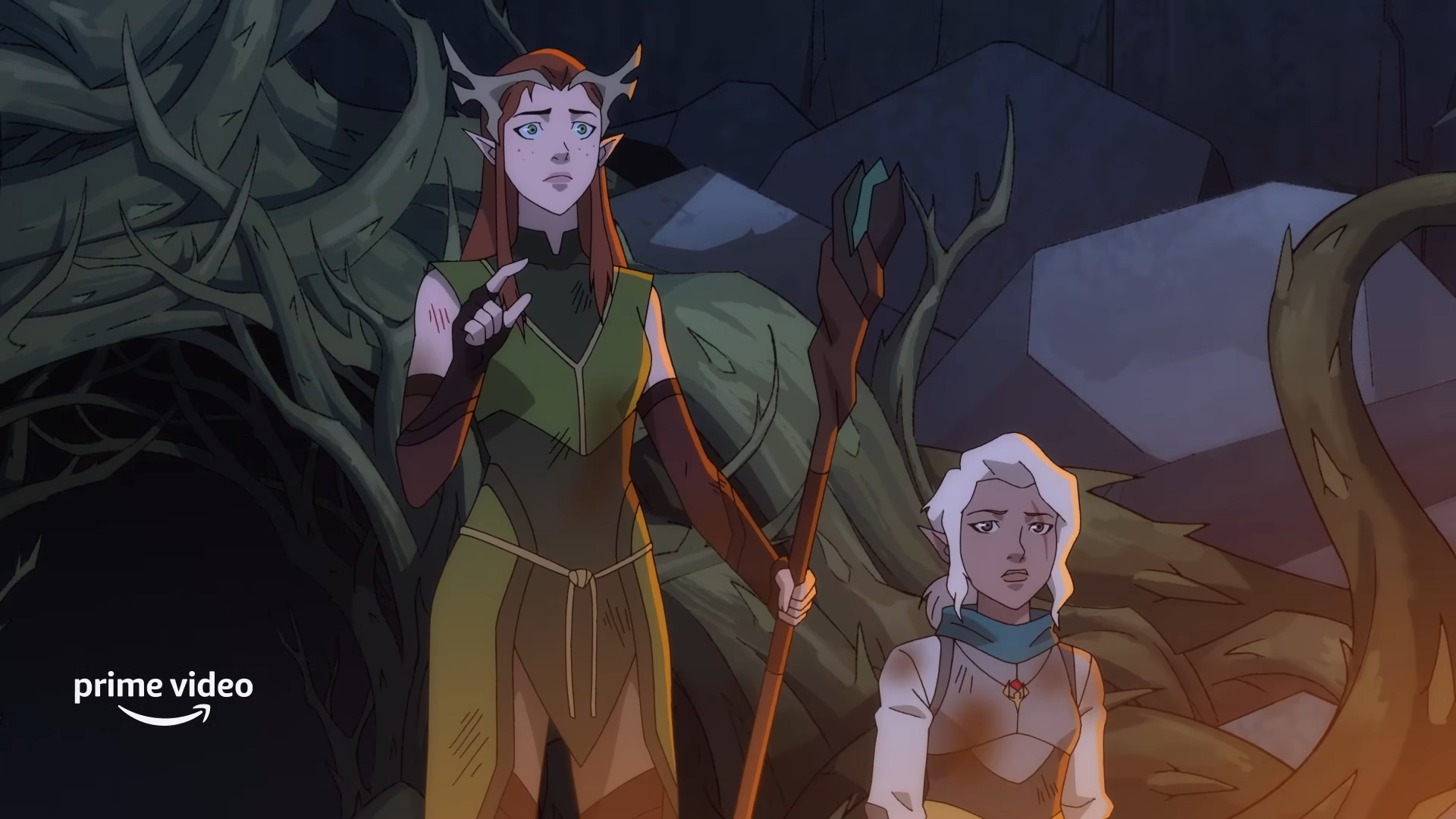 Based on ‘Critical Role,’ adult animated fantasy adventure series ‘The Legend of Vox Machina’ hits a nice spot between fan service and creating an enticing universe. The world is built on the popular game ‘Dungeons and Dragons,’ while the lively voice cast and the old-school animation make it a worthwhile watch.

After a bumpy start, the series picks pace with the story arc of Percival de Rolo. The twelfth episode, titled ‘The Darkness Within,’ brings closure to the story, while a final scene keeps you wondering the future course of the story. The finale does not answer some questions and lets us smoothen those rough edges. SPOILERS AHEAD.

The Vox Machina – Keyleth, Grog, Pike, Scanlan, Vex, Vax, Percy, and the bear Trinket – hold unique powers. Although unsure of themselves, they head to the regal palace looking for bounty. Sovereign Uriel entrusts them with tackling a dangerous creature, and the dragon kicks them around. The heroes retreat to the castle with the news that the beast they are dealing with is a blue dragon, which the Council already knows. We eventually find out that the dragon is General Krieg, who plans to rule over Tal’dorei with his dragon army. They kill the dragon, and the king throws them a grand party. He wants to strengthen security, with Vox Machina heading the department. 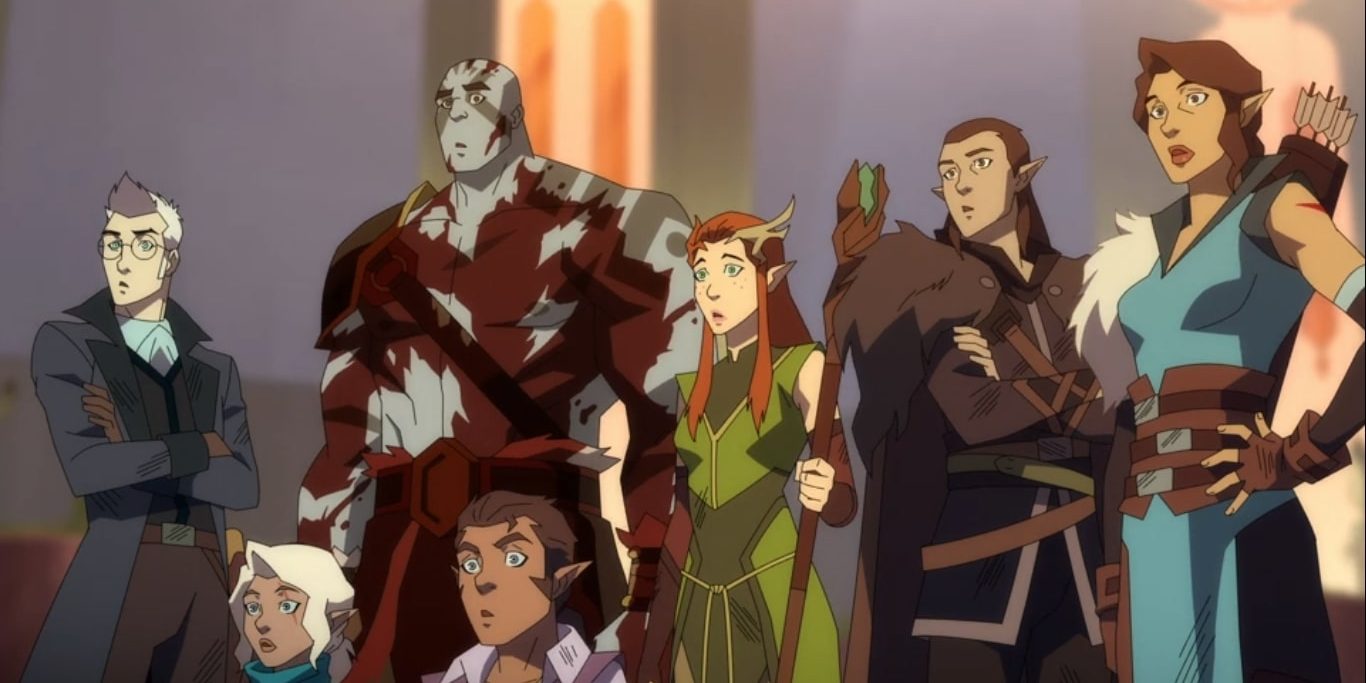 The series primarily follows the story arc of Percival de Rolo and his grudge against the Briarwood family for murdering his parents. Sylas and Delilah Briarwood arrive for the grand feast, and Delilah entrances the king. She also recognizes Percy from the other side of the table and incites his anger. Vax goes to steal the Ziggurat, the book of spells, from Delilah’s room. When the Briarwoods catch Vax, a fight ensues, and the rest of the Vox Machina gets down on the field. While the Briarwood couple manages to flee, Percy shoots the coachman, and the team gets banged up in the dungeon. Pike momentarily loses her connection with the Everlight, making her visit the shrine.

When Delilah sends the undead to assail the Vox Machina, the heroes show some moves, even though the guards die. The Vox Machina heads to the Whitestone, Percy’s ancestral estate, to take on the Briarwoods. Delilah worships the Whispered One, and she can raise hell on her own. The heroes enter the seeming ghost town – and Percy comes across the familiar face of Keeper Yennen. From the old preacher, they know that the Briarwoods have imprisoned Archibald, Percy’s childhood friend and the revolution leader.

In prison, Keyleth learns she can turn into a white tiger, while Percy reveals his more violent side. Percy’s pepperbox gun “The List” sees the death of Captain Stonefell, and Scanlan messes with Duke Vedmire. On the other hand, the heroes deal with Professor Anders, who slits Cassandra’s throat. Keyleth revives him with a muddy mixture and some magic, while Anders’ tongue works its charm. He manages to hypnotize all of them, but Percy comes to the rescue with his Orthax-infused gun. After Anders, they deal with a horde of zombie warriors, some of whom are five times the size of Grog. 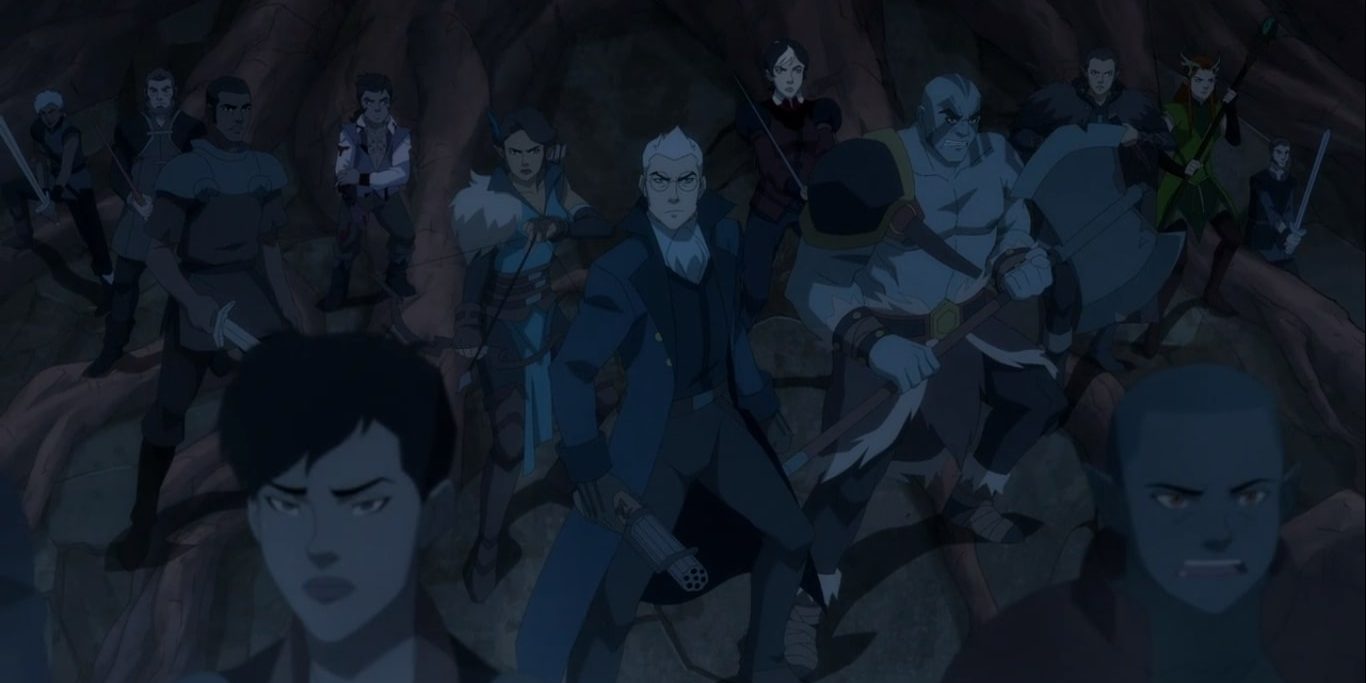 While Archibald becomes a martyr, Percy leaves Duke Vedmire for public murder because the duke is not on Percy’s List. The List entails Anna Ripley, the scientific genius who used the Briarwoods as patrons. The heroes encounter her on their way through the dungeon, and although Percy is too eager to pull the trigger, Vex’ahlia dissuades him from making harsh decisions.

The finale comes a bit too close to the game when Delilah sets Percy’s undead ancestors on the heroes and tries to drown them in acid. Meanwhile, Cassandra sides with the Briarwoods, and the heroes have to pull two levers simultaneously to drain the acid. Grog swims in a pool of acid to achieve the impossible feat, but they now have Pike’s healing powers. Afterward, the heroes encounter Sylas and Delilah, and Sylus’ vampiric glance turns the heroes against one another.

At the final moment, Delilah and Sylas flee to the Ziggurat to perform a final ritual. The heroes get beaten up, but Keyleth comes to the rescue as she summons the power of the Sun Tree. On the other hand, Pike deals with Delilah Briarwood. Keyleth and Grog team up to fry Sylas alive. A vengeful Delilah fatally injures Keyleth. On the winter solstice day, the barrier between two realms is the thinnest, and the time is ideal for the Whispered One to pass on to this realm.

The heroes stop the ritual, but the realm of the Ziggurat strikes out the power of magic and potions. While Pike’s hologram disappears in the end, Vax applies Keyleth’s formula to her wound. While Percy’s struggle with Orthax comes to the fore in the final moment, Cassandra gives Delilah the final blow. With some reinforcement from Cassandra, who has come out of the Briarwood charm, Percy becomes free of his pistol spirit. Scanlan closes the Orthax chapter by throwing the gun into the acid pool, and Percy hands the duty of ruling over the Whitestone to Cassandra.

The Legend of Vox Machina Ending: Who Is Orthax? Is It Dead or Alive?

Orthax is a demon that feeds on Percy’s hunger for revenge. When Percy made his pepperbox pistol, the List, he accidentally summoned the demon. As per the contract with the devil, Percy feeds the devil with souls, while the specter gratifies Percy’s vengeance. The gun has six barrels, but there are only five names on it – that of the Briarwoods, Anders, Anna Ripley, and Stonefell – while the sixth name of Cassandra suddenly appears on the gun in the tenth episode.

As the shadow demon of Orthax overtakes Percy, the reality blurs in front of his eyes. Percy sees Captain Stonefell in place of Scanlan, and the Orthax urges Percy to take a shot. But in the end, the conflict comes to an end when Percy drops the gun and comes back to his senses. Meanwhile, Scanlan deduces that the spirit still possesses the weapon and throws it into acid. We hear the shriek of the demon for one last time, and the monster dies.

While Percy remains thankful to his friends, Scanlan reveals his deduction method – pure guess! Percy later keeps the pistol of Anna Ripley, naming it “Retort.” In the campaign, Ripley bound parts of the pistol with a charm that would help her track the Vox Machina. Although Scanlan destroys the List, Orthax can never fully die as a demon, and it may resurface later.

Is Anna Ripley Dead or Alive?

While the heroes tackle Sylas and Delilah Briarwood, Anna Ripley does not want to stand in the middle of the crossfire. She flees the scene, and the heroes do not know her whereabouts as of now. Vex’ahlia indicates that another battle is due, which keeps the viewers rooting for a second season. However, Ripley holds her promise by showing the heroes the way out of the traps. If you follow ‘Critical Role,’ you would know that Anna Ripley resurfaces again in “The Chase to Glintshore,” where she makes a similar deal with Orthax. While the series keeps her alive, it would be intriguing to see if a possible second season continues her story arc.

Who Are The Four Dragons In The End?

In the end, Uriel announces his abdication from the throne since he had previously misjudged the Vox Machina. As he endows the responsibility to the Council, the Kingdom of Emon sees a transition from sovereignty to democracy. Meanwhile, Vex’s buzzing pain returns, and we see four dragons coming towards the Cloudtop Castle. 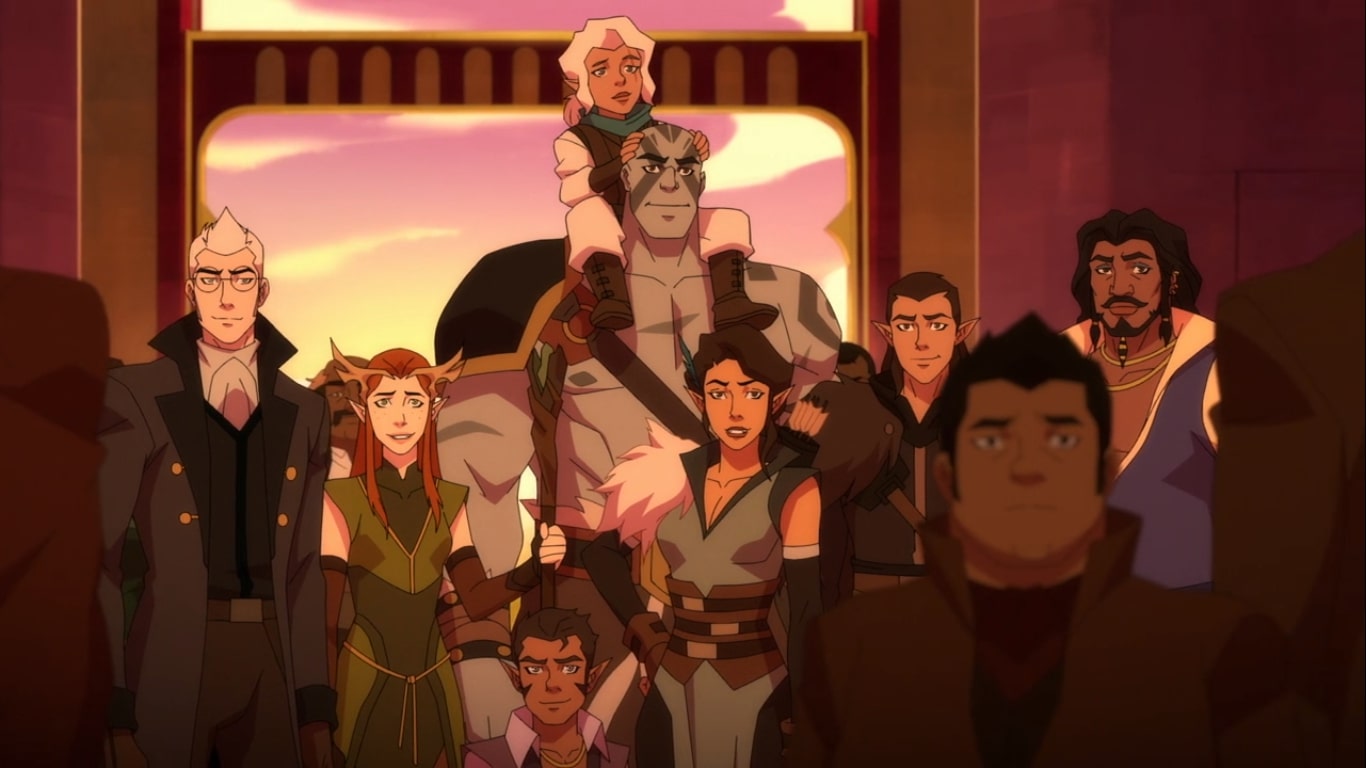 These dragons are the Chroma Conclave, which takes us to the beginning of the fourth chapter in ‘Critical Role.’ They are Raishan, the Diseased Deceiver; Thordak, the Cinder King; Umbrasyl, the Hope Devourer; and Vorugal, the Frigid Doom – friends of Brimscythe (alias General Kreig). The dragons wreck the land, but that is perhaps the stuff of a potential second season.

Read More: Do Vax And Keyleth Get Together In The Legend of Vox Machina?