Thirteen Lives’ Thai Cave Rescue: Where Are They Now? Update 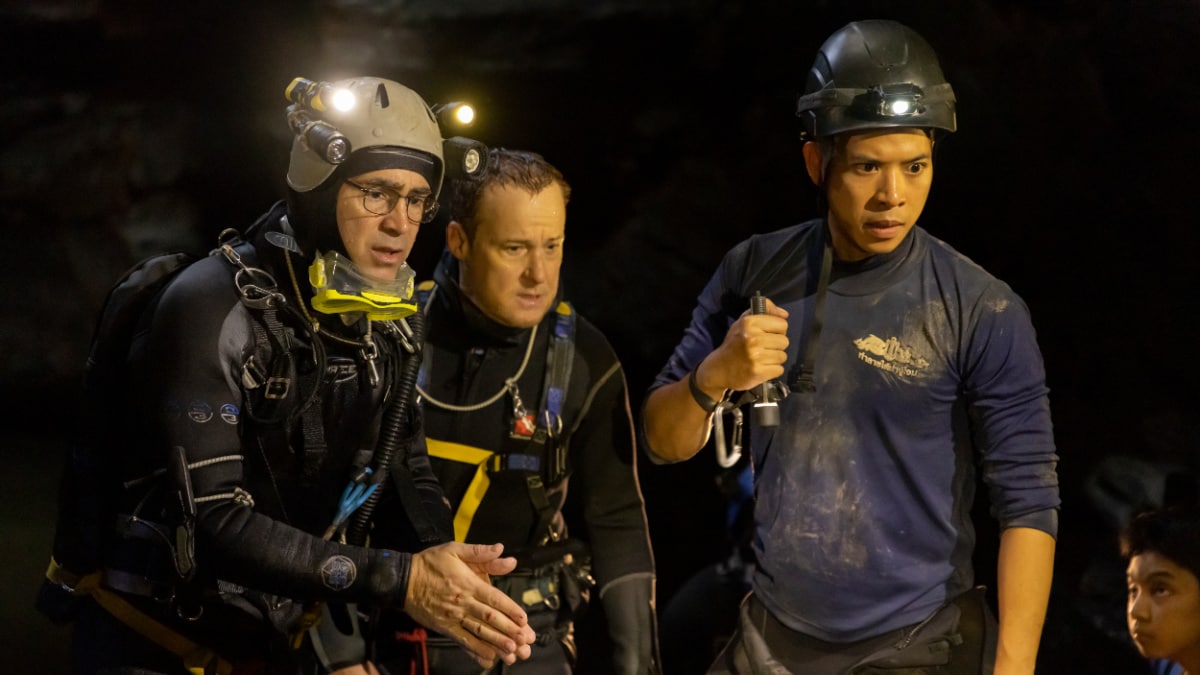 When 12 members of a junior soccer team by the name of Wild Boars and their assistant coach decided to explore the Tham Luang caves on June 23, 2018, they never expected it to become an ordeal. That’s because they stepped into this Thailand under-mountain system in relatively calm weather, only for swift heavy rains to trap them inside for 18 days, as charted in Amazon Prime’s ‘Thirteen Lives.’ It thus took intense international efforts to ensure their safe rescue — so now that it’s been a while, if you wish to learn more about what all the key people are up to these days, we’ve got you covered.

Where Are The Boys and The Coach Now?

From what we can tell, a majority of the rescuees still reside in their native province of Chiang Rai in Thailand, where they continue to devote themselves to the sport as well as their education. The youngest, then 11-year-old Chanin “Titan” Viboonrungruang is precisely on this path, along with now 17-year-olds Panumart “Mix” Saengdee, Duangphet “Dom” Phomthep, and Mongkol “Mark” Boonpiem. We should mention Somphong “Pong” Jaiwong (of the same age group), in particular, is currently enrolled at Chiang Mai Technical College in the Si Phum sub-district, a cultural hub.

On the other hand, we have Adul “Dul” Samon, the only English speaker of the trapped 13 and hence the one to communicate with the initial rescue group, who has since made his way to the US. It appears as if he’s happily attending a summer program at Cornell University at the moment, all the while being enrolled at The Master’s School in New York (graduating class of 2023). Dul, Mark, Phonchai “Tee” Khamluang, and their assistant coach Eakapol “Eak” Chantawong were stateless when the incident occurred, but they were granted complete Thai citizenship on September 26, 2018.

Unfortunately, we couldn’t find any concrete details on Nattawut “Tle” Takamrong (then 14) or Phiraphat “Night” Somphiangchai (who celebrated his 17th birthday in the cave). As for the rest of the boys, now-adults Ekkarat “Biw” Wongsukchan and Tee are still dedicated to soccer, Prachak “Note” Sutham is leading a good life alongside his girlfriend, and the engaged-to-be-married Phiphat “Nick” Phothi serves as a rescue center worker. Last but not least, the then-25-year-old monk turned coach Eakapol “Eak” Jantawong has since established his own football training facility called the Eakapol Academy.

Where is John Volanthen Now?

Although John Volanthen wished to keep his distance from the limelight following the events of 2018, he has not shied away from sharing his side of the story to indicate he’s not a hero, just a skilled diver. However, he has since received the Bronze Cross, the Royal Humane Society’s Bronze Medal, the honor of Pride of Britain, the George Medal, and the Queen’s Gallantry Medal — all in 2018 or 2019. John was further made a Member of the Order of the British Empire, yet he hasn’t let any of these aspects affect his work as a South and Mid Wales Cave Rescue Team Member or a senior IT consultant at Comparket.

John seems to be based in Bristol at the moment, where he combines his expertise in electronics and diving to develop safer gear, runs marathons to stay in shape, and continues to explore as much as possible. We should mention the public speaker is even an Assistant Cub Scout leader who homeschools his son Matthew, is in a relationship with Claire Foster, and genuinely prefers to keep his private life on the down low. But if you want to know the Brit’s entire personal account of the rescue, you can read it in his nail-biting May 2021 book ‘Thirteen Lessons that Saved Thirteen Lives: The Thai Cave.’

Where is Richard “Rick” Stanton Now?

As someone who has dedicated a significant portion of his life to cave diving, Richard “Rick” Stanton continues to keep it up to the best of his abilities while spreading knowledge of the same. The Coventry, England resident is a former firefighter with 25 years of experience, which he admits helps him in every expedition as well; thus, his aim is to provide insights to others for safer, better adventures. In fact, not only does he continue to be an active diving member of the Cave Rescue Organisation, but he has also served as a consultant on projects related to the Thai case.

Did you know that one of the experts that rescued the trapped Thai schoolboys was a hero firefighter and cave diver from Coventry?

Rick Stanton got an MBE for years of service. He said "this was completely uncharted, unprecedented territory and nothing like this has been done." pic.twitter.com/PSRzzaXYfJ

Like John, Rick too has received the Royal Humane Society’s Bronze Medal, the George Medal, the Pride of Britain honor, the Queen’s Gallantry Medal, and an honorary degree from the University of Bristol. He was also made a Member of the Order of the British Empire, and then he additionally acquired the Hero of the Year Award at the West Midland Fire Service’s Aspire Awards in 2021. Rick has deliberately never married or started a family because his work is his whole life, which he touched upon in his June 2021 book “Aquanaut: A Life Beneath the Surface – The Inside Story of the Thai Cave Rescue.’

Where is Dr. Richard Harris Now?

As an anesthesia specialist as well as an experienced cave diver, Dr. Richard “Harry” Harris is arguably the one individual whose expertise led to the Wild Boars soccer team’s successful rescue. It’s hence no surprise that he has since been awarded the Star of Courage, the Medal of the Order of Australia, the Order of the Direkgunabhorn, and the title of Australian of the Year (2019). However, this incident is nothing but bittersweet for him because he learned his father passed away shortly after the mission came to a positive close on July 10, 2018.

Coming to his standing, Richard presently resides with his wife Fiona and their three children — James, Charlie, and Millie — in the laid-back suburb of Goodwood in Adelaide, South Australia. That’s where he carefully builds his skills, serves part-time at the Specialist Anaesthetic Service Medical Center, and works to expand his prospects as a public speaker and beyond. He actually continues to actively volunteer in a wide variety of search-rescue operations, all the while teaming up with charities like Operation Flinders Foundation as well as hosting his ‘Real Risk Podcast.’ Richard is also an aspiring filmmaker and an author — he co-wrote ‘Against All Odds’ (November 2019) with Craig Callen and penned a children’s book ‘Alfie the Brave’ (April 2022).

Where is Jason Mallinson Now?

From what we can tell, Jason Mallinson is not only a native of the large market town known as Huddersfield in West Yorkshire, England, but he’s also still based in the same area. He actually prefers to keep every aspect of his life away from the limelight, so we regrettably don’t know much about him apart from the fact he specializes as a rope-access technician in cave diving. The active member of the British Cave Rescue Council’s international team has 30+ years of experience, along with national/world records under his belt, making it clear he’s perfectly qualified for his job.

We should mention that Jason has received the Queen’s Gallantry Medal, the Pride of Britain Award, as well as an honorary doctorate from the University of Huddersfield, allowing him to expand his reach. “Don’t miss out on opportunities to do something different, something outside the box,” the veteran diver and motivational speaker said during his acceptance for the latter in 2019. “You never know where they might take you. Be confident in your abilities and ignore your detractors.”

Where is Chris Jewell Now?

Like his fellow British divers, Chris Jewell is a recipient of the Queen’s Gallantry Medal, yet unlike them, he has also been honored with the first-ever Medal of Valor by the Professional Association of Diving Instructors. As if that’s not enough, he has even obtained a Bravery Award from his home county of Somerset, South West England — he resides in the village of Cheddar here with his wife, Laura Trowbridge.

More importantly, though, Chris works as the Head of Professional Services at Access Group and is an active member of the British Cave Rescue Council to continue his explorations. We should mention the cycling enthusiast is actually so respected in his field that he’s now deemed a highly-sought speaker at any caving, diving, rescuing, and adventure conferences.