Where is the Gold at the End of Money Heist Season 5 Part 2?

The international megahit heist crime thriller series ‘Money Heist’ returns for the final round and has every bit of action, mystery, melodrama, romance, humor, and tragedy that the audience has come to love the show for. After Tokyo (Úrsula Corberó) and Rio’s (Miguel Herrán) Caribbean paradise is invaded by the authorities, and the latter is apprehended, the Professor (Álvaro Morte) brings the gang back together for one more heist. This time, their target is the Bank of Spain and the gold reserve stored there. As the plan is put into effect, organized chaos ensues, corrections to the original plan are made, passions flare, and people die, including Nairobi (Alba Flores) and Tokyo.

In ‘Money Heist’ season 5 part 2, the extraordinary saga of the modern merry band of thieves comes to an epic conclusion. Since season 3, the gold from the Bank of Spain has served as the primary plot device. If you are wondering what happens to it, where it is, or who has it, this is what you need to know. SPOILERS AHEAD.

What Happens to the Gold from the Bank of Spain?

Originally, the Bank of Spain heist was Berlin (Pedro Alonso) and Palermo’s (Rodrigo de la Serna) idea. It was later dropped, and the Professor decided to focus on the Royal Mint instead. However, after Rio was taken, the Professor needed a big enough stage to force the authorities to not only release him but also let him (the Professor) and the others go. While sophisticated, Berlin and Palermo’s plan had plenty of wrinkles, and the Professor worked on them and ironed them out until the plan was fit to be executed. 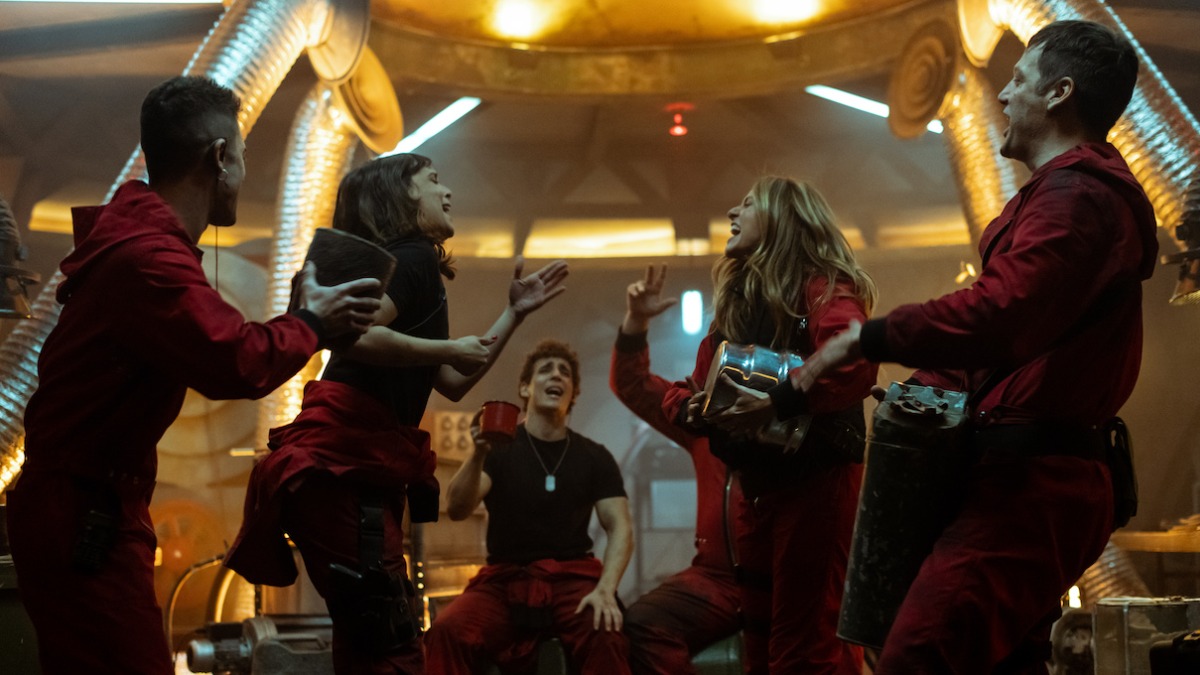 The crew inside the bank first melts the 90 tons of ingots and turns the gold into tiny gravel-size pieces. They use the 120,000 liters of water already inside the vault as the driving force to transfer the gold to a stormwater tank, where Benjamin and his team, along with the Professor and Marseille (Luka Peroš), are waiting for it. They melt the gold once more and turn it back into ingots.

Right when all the gold has been transformed back into ingots, the police seemingly arrive. Seeing that there are only four cars, Marseille and Benjamin’s crew take up guns, but the Professor dissuades them, not wanting anyone else to die because of him. They are apparently arrested and placed behind a police van, but about 20 minutes pass without anything else happening. The Professor realizes that something is seriously wrong and breaks out of the van, only to discover that all the gold is gone.

It is revealed that Berlin’s son, Rafael (Patrick Criado), and Berlin’s former wife, Tatiana (Diana Gómez), have stolen the gold. Like the Professor, his brother tended to talk in the bed, and he spoke about the plans to his then-wife. Tatiana eventually left Berlin for Rafael, and they were waiting together to enact their own plan all this while. When the Professor began the Bank of Spain heist, Rafael and Tatiana became active. They acquire a large crew and a plot of land. After sneaking the gold out from right under the Professor’s nose, they buried it in the plot and set up a movable house on top of it, complete with stepping stones, artificial grass, and potted plants.

The Professor told almost all members of the crew, including Lisbon, that the gold was supposed to serve as the bargaining chip to get the bank crew out from the clutches of the authorities. With it gone, the situation now looks bleak. It becomes even worse when a member of Sagasta’s unit deactivates the explosives at all three entry points and lets the police and the military in.

The bank crew is subsequently arrested. The Professor, who doesn’t have his supposed bargaining chip, tells Alicia Sierra (Najwa Nimri), now a full-fledged member of the crew, to find the gold with Benjamin’s crew. He then sends Marseille to lead the authorities on a wild goose chase while he turns himself in. When he finally faces Tamayo (Fernando Cayo), the Professor seems to have one more hand to play. He tells Tamayo that the situation can only end in two scenarios — either they can both win, or they can both lose.

Who Has the Gold at the End of Money Heist?

As the news of the heist becomes public, Spain dangerously hangs on the verge of a financial collapse. The Professor uses this as leverage to force an extremely reluctant Tamayo to agree to his terms. The latter has no other choice as the search for gold has been fruitless. And the authorities have tried everything — from intimidation to torture to lucrative offers — to force the Money Heist crew to divulge any information about the gold. Nothing works because not even one member of the crew inside the bank at that point, including the Professor, has any idea where the gold is. It seems that Rafael and Tatiana stealing the gold has turned out to be a blessing in disguise. 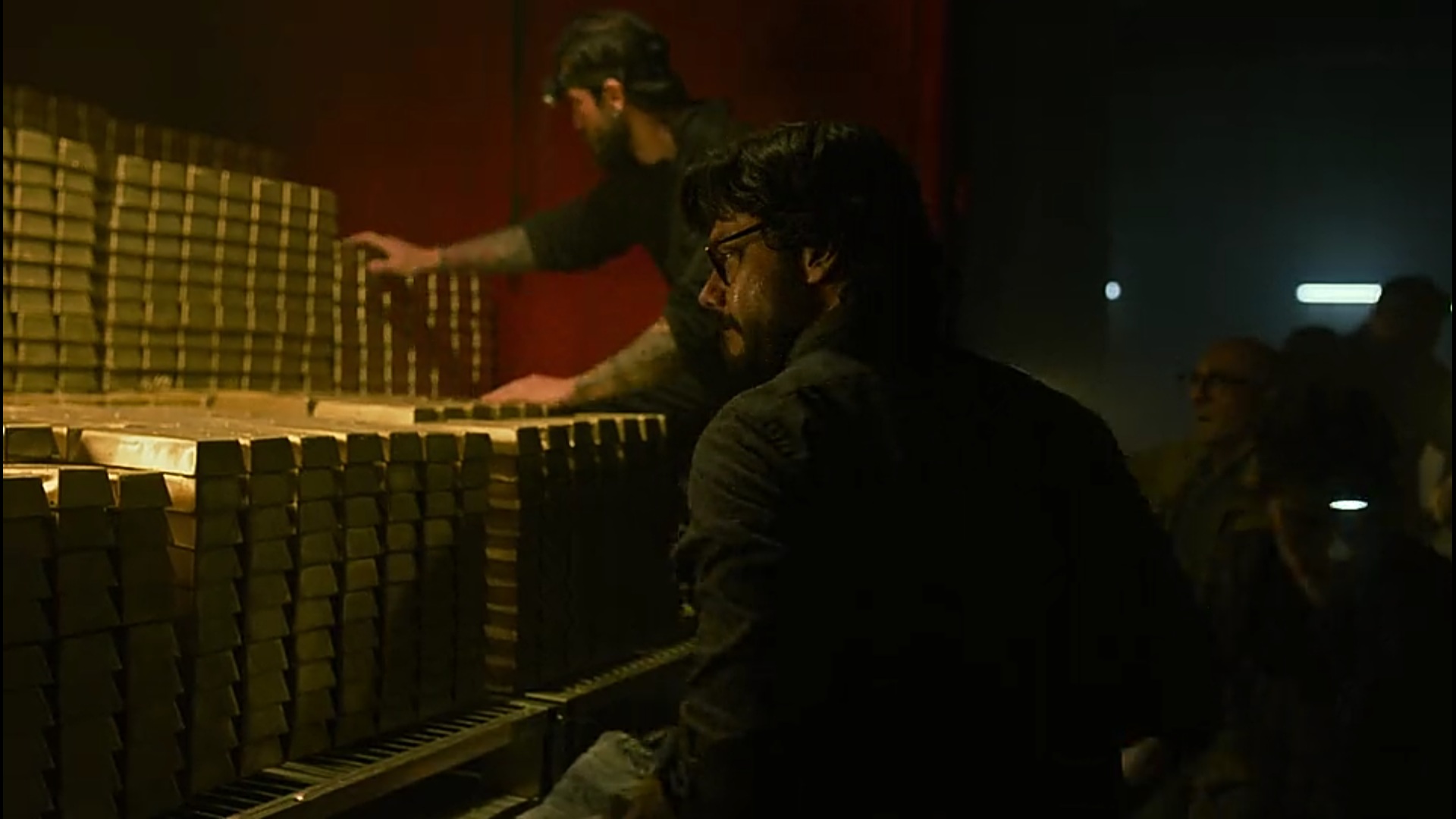 Tamayo agrees to release the crew in exchange for the gold. But when the ingots arrive, they are revealed to be made of brass, with gold plating and the crew’s signature Dali mask stamped on them. This is the Professor’s magnum opus of illusions. As the world sees the gold being returned to the Bank of Spain, the financial crisis is averted. Spain doesn’t use the gold reserve, so it doesn’t matter whether the ingots stored there are made of gold or brass.

Tamayo is forced to swallow the bitter pill and accept his defeat. The Professor is ultimately and quintessentially a thief. He never planned to give the gold back to the authorities. Palermo recognized this and was the only person in the crew who knew about it.

Meanwhile, Alicia finds the plot where Rafael and Tatiana hid the gold. But she triggers the sensors they placed on the property. There is a confrontation between the two crews. Alicia deescalates the situation by giving Rafael a note from his uncle, in which the Professor most likely reminds his nephew that they are family. Rafael agrees to give the gold back, knowing that he, Tatiana, and their crew will get their share.

Tamayo tells the media that the Professor and every member of his crew, except Denver (who is in the police custody), are dead. In reality, they are given different passports and escorted out of the country. The Professor uses the gold as leverage, forcing the authorities to agree to never come after him and his crew. If they do, the truth about the brass ingots will come out, and Spain will experience another financial crisis. 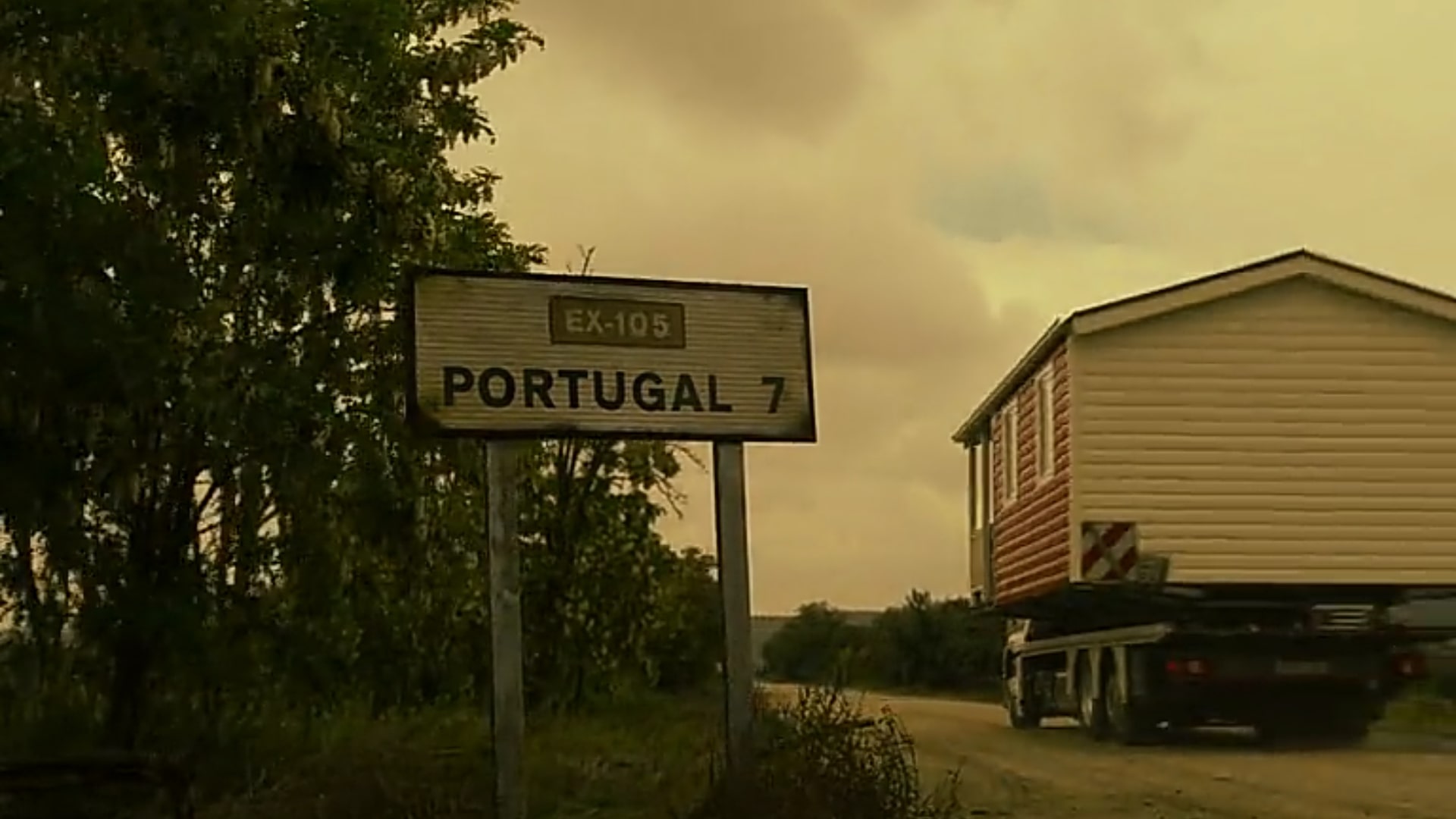 The last time we see the gold in Money Heist, Benjamin crosses the border into Portugal with it inside the movable house from earlier. We can assume that the 90 tons of gold will be divided among the remaining members of the two crews, and none of them will have to work ever again.