Where Was 8 Mile Filmed?

A cult classic for many hip-hop lovers, ‘8 Mile’ is a 2002 musical drama movie directed by Curtis Hanson that comprises several autobiographical elements from Eminem’s life, who stars in the movie as the protagonist, Jimmy Smith Jr. or B-Rabbit. Set in 1995, the narrative follows B-Rabbit, who is looking to make a name for himself in the hip-hop industry, a music genre dominated chiefly by African-Americans. As an up-and-coming white rapper, he, with the help of his friends, gathers enough courage to hurdle past all the barriers his personal life and culture throw his way to finally turn his dreams into reality.

All B-Rabbit has to do is not let his sweaty palms, weak knees, and the vomit on his sweater bother him too much and not choke while he performs battle raps against some of the toughest rappers in the city. The stans and hip-hop fans generally get hooked on the movie from the get-go as it gives us a glimpse of what it was like to be an upcoming rapper in the 90s. Besides that, since the story is set in Eminem’s hometown, it is bound to make you wonder if it was filmed there as well. Well, allow us to get rid of all your curiosities regarding the same!

‘8 Mile’ was filmed in Michigan and New York, specifically in Wayne, Macomb, Oakland counties, and New York City. The principal photography for the Eminem-starrer seemingly commenced in September 2001 and wrapped up in January 2002. So, without further ado, let’s follow B-Rabbit in his journey and navigate the specific locations that appear in the movie!

A majority of ‘8 Mile’ was lensed in Wayne County, the most populous county in Michigan. First and foremost, the iconic music venue The Shelter, where Eminem used to battle against other rappers in his early days, is an actual place at 431 East Congress Street, below Saint Andrew’s Hall. However, the production team instead utilized a warehouse at 240 Chene Street to shoot the interior scenes of the Shelter for the movie. 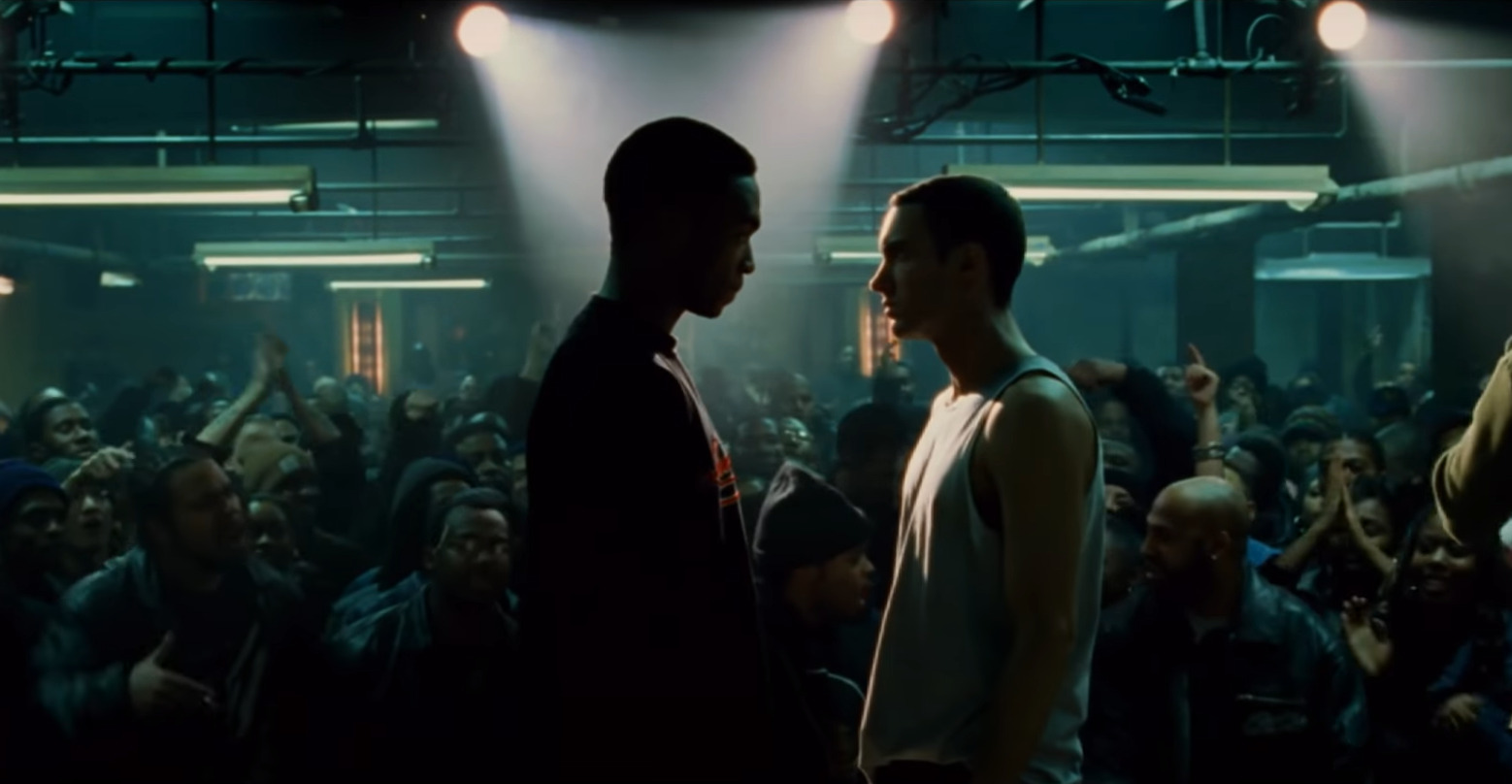 For the exterior scenes, they transformed the building at 30 Clifford Street, which now houses Downtown Louie’s Lounge, to portray the facade of the Shelter as accurately as possible. To make things even more interesting, the backstage scenes of the Shelter were taped in the Rite Aid store at 1120 Griswold Street, which is closed now. The scenes depicting B-Rabbit’s day job where he deals with crash parts were shot in New Center Stamping Inc at 950 East Milwaukee Avenue Street in Detroit. Later, when his car doesn’t start, he takes the bus from Chene Street.

In addition, Alex, his love interest, waits tables at a restaurant, and those scenes were recorded in Intermezzo at 1435 Randolph Street. Unfortunately, it has shut its doors permanently. The already closed-down club at the time of filming, Chin Tiki Club at 2121 Cass Avenue in Detroit, served as the production site for the scenes featuring B-Rabbit and his crew Three One Third in a club. The face-off scene between the Three One Third and the rival rappers, The Free World, took place in an elaborate parking garage of The Michigan Building at 220 Bagley Street, Detroit.

Moreover, the Penobscot Building at 645 Griswold Street in the city doubled as ‘WJLB’ radio station, where Rabbit goes to launch his career at the insistence of Wink. When Rabbit and his crew are speeding in his car, they shoot the cow atop the Ira Wilson & Sons Dairy at 13099 Mack Avenue with a paintball gun. Apart from that, the scene where they burn a house was taped at 122 Beresford Street in Highland Park. The scuffle between the Three One Third and The Free World intensifies as B-Rabbit goes to throw hands at the rival rappers, and Cheddar Bob manages to shoot himself in the leg.

This pivotal sequence was shot in the empty lot at 8461 Grand River Avenue in the Petoskey-Otsego neighborhood. After the accident, Cheddar lays low in his house at 1250 McClellan Street on Jefferson Avenue in English Village. The iconic scene at the end where Rabbit walks off into the street showing a peace sign to his crew was lensed on the alleyway alongside Griswold Street. Lastly, the city of Southgate also served as an important filming location for the movie.

Some pivotal sequences for ‘8 Mile’ were recorded in Macomb County, the third most populous county in Michigan. The trailer park scenes where Rabbit lives with his mother were recorded in A&L Mobile Home Park at 20785 Schultes Avenue in Warren. Furthermore, as mentioned above, he takes the bus from Chene Street, but Schultes Avenue is what he sees out the window of his seat while scribbling down lyrics.

For taping a few scenes, the cast and crew members set up camp in Sterling Heights as well. Additional portions for the drama movie were lensed in Southfield, a city in Oakland County in Michigan that shares part of its southern border with Detroit.

The cast and crew next traveled to New York City, particularly Queens, to shoot some key scenes for the Curtis Hanson directorial. Situated on Long Island, the Queens borough is famous for hosting the U.S. Open tennis tournament, and its Citi Field is known as the home of the renowned baseball team, the New York Mets. Meanwhile, New York City is a global cultural and economic hub, nestled atop the Hudson River. Several movies and TV shows have graced the populous metropolis during their production, such as ‘Not Okay,’ ‘Spider-Man: No Way Home,’ ‘Only Murders in the Building,’ and ‘Severance.’