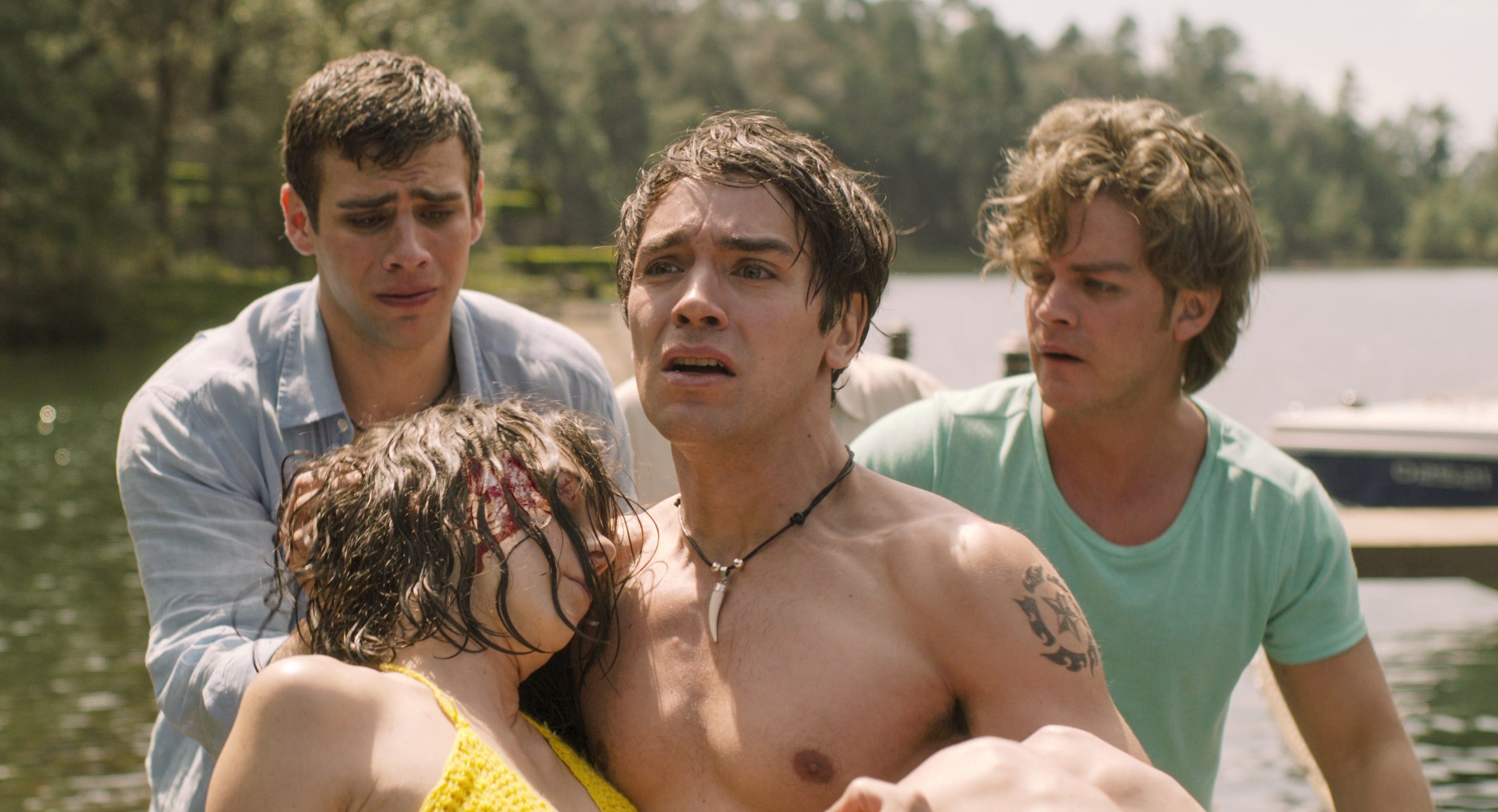 ‘Who Killed Sara’ is a slow-burn Mexican mystery drama about Alex Guzman’s hunt for his sister’s murderer. José Ignacio Valenzuela’s Agatha Christie-inspired murder mystery balances the suspense of a whodunnit-style mystery with the scandalous complexities that make telenovelas addictive. In season 2, Alex delves into Sara’s troubled past, opening up a Pandora’s box of secrets, ominous hitherto unknown characters, and a fresh barrage of sickening details that make Sara the enigma that she is.

With an explosive season finale that reshuffles the entire mystery just when we think everything is solved, season 2 is an ambitious bridge to what could be an even more expansive mystery. Let’s connect the dots and see if we can get a handle on ‘Who Killed Sara’ season 2. SPOILERS AHEAD.

‘Who Killed Sara’ season 2 focuses strongly on Sara’s past. The season starts with us seeing her fractured relationship with her mother, who Sara thinks wants to commit her to a mental institution. As Alex digs into his sister’s past, he finds out from her doctor that she had severe paranoid schizophrenia and sociopathic tendencies.

This, for the first time, makes Alex wonder whether his sister had caused anyone harm and that her death might’ve been at the hands of someone Sara hurt or threatened. Soon, we are introduced to Nicandro, the Lazcano boys’ wealthy childhood friend. A shady and unpleasant figure from the start, Nicandro seems even more suspicious when he offers Sara drugs in one of the show’s many flashbacks.

Sara takes him up on the offer and begins selling drugs for him in order to get money to help her father escape from the mental institution where he is being treated. We also learn of Sara’s childhood friend Marifer’s convoluted plot to confront the Lazcanos about her mother’s death, for which she baits Jose Maria using his childhood friend and her sister, Clara.

Sara’s relationship with her father is one of the show’s darkest details so far, as we find out that Sara and Alex’s mother was raped by a mentally unstable man named Abel, which resulted in Sara being born. Already paranoid that everyone is out to get her, Sara’s delicate mental state is further disturbed when she secretly meets her father, who repeatedly reminds her that they are related and that she is like him. We later see Sara undergoing electroconvulsive therapy, whilst saying that she does not want to be like her father.

In season 2, we see the definitive fall of the Lazcano empire, with Cesar’s shady financial dealings and illegal prostitution racket being uncovered. As Cesar finally finds himself against the wall, he fakes his death and disappears. However, when his daughter Elisa is kidnapped by his vengeful colleague Sergio, Cesar resurfaces and, with Alex’s help, rescues Elisa and kills Sergio. He also answers the long-standing question about the corpse in Alex’s backyard, telling him that it belonged to a man who was trying to kill Sara.

We subsequently find out that it was Abel, Sara’s father, who was attacking her and was killed by Cesar. In the tumultuous finale of season 2, Marifer, who has orchestrated Alex’s investigation as well as Jose Maria’s surrogacy, all to avenge her missing mother, finds out that it was her father that killed her mother many years ago. In an ensuing scuffle, she accidentally shoots her pregnant sister Clara. In the closing scenes of season 2, Marifer confesses to Alex that she was the one that cut the straps on the parachute, resulting in Sara’s death.

Who Killed Sara Season 2 Ending: How is Nicandro Involved in Sara’s Murder?

Finding out that Sara was her sister as well, Marifer struggles to come to terms with the fact that she’s killed both her sisters. The last we see of her, she is crushed under debris in the inferno that was once Cesar Lazcano’s casino which is finally burnt to the ground by his daughter Elisa. In the closing scenes of season 2, we see Nicandro on the phone with Sara’s doctor, claiming responsibility for Sara’s death. On a photograph of Sara, we see written that she was the first subject of a mysterious project.

And so, the hunt for the person (or people, since more than one conspirator seems to be involved) responsible for Sara’s death continues. And though Alex seems to think that he’s found the culprit in Marifer, as we’ve seen in the world of ‘Who Killed Sara,’ the truth cannot stay buried for long. This brings us to the burning question of just how Nicandro was involved in Sara’s death.

From the closing scenes, we know that he conspired with Sara’s old doctor to keep secret that Sara was a test subject in a project, most likely of the psychiatric variety. We also see that he pulls out her folder from a cabinet full of folders, meaning that there have been many other subjects in the project after Sara. For now, all we know is that the mysterious project might be represented by the Medusa image briefly seen on the cover of Sara’s folder.

Going back to their childhood, it’s easy to see why Nicandro would wish harm on Sara. Apart from endangering his life by cutting his bike’s brake cables, Sara also told Nicandro’s parents that he was dealing and consuming drugs. As Nicandro explains, this is why he was sent away by his parents. However, considering that Sara was involved in the mysterious project before she died, it doesn’t seem like Nicandro, who was also a teenager at the time, could be the one running it.

This means that Nicandro’s father, who sends money to Sara’s doctor and who we think is richer even than the Lazcanos — it is mentioned in passing that Nicandro’s house is bigger than the Lazcanos’ — is most likely the person behind the mysterious project. Knowing Sara’s need for money and love for danger, Nicandro possibly recruits (or fools) Sara into becoming a part of the project which somehow, eventually, leads to her death.

Although we don’t hear about the project till the very end, we might have been given clues as to the fact that Sara was involved in some form of psychological therapy. This is seen in a brief scene where Sara willfully, and almost eagerly, undergoes electroconvulsive therapy, saying that she does not want to be like her father. It is possible that what we see here, though not specified, is Sara undergoing a procedure as part of the project.

Most likely, fearful of turning out to be like her mentally unstable and dangerous father, Sara agrees to undergo therapy that she thinks will help her. Unbeknownst to her, and possibly misled by Nicandro and her doctor, who we later find out is in cahoots with Nicandro, she was used as a test subject for a project that eventually leads to her death.

Marifer turns out to be one of the story’s major engines as well as mysteries. Originally seen as someone helping Alex investigate the Lazcanos, her darker motives come to light in season 2 as we see her manipulate her sister Clara to further manipulate Jose Maria. Her glee at Cesar’s (apparent) death shocks even Alex, and slowly, Marifer’s character is revealed to be calculating, vindictive, and possibly unstable. Near the end of season 2, we also see that she has an unhealthy obsession with Alex.

Marifer, after realizing that Sara was her half-sibling and accidentally shooting her sister Clara, struggles to come to terms with the gravity of what she has done. She also learns that her father killed her mother, a crime that she long held the Lazcanos responsible for and was motivated by. The last we see of her, she is crushed under falling debris in Cesar’s casino whilst it is being burnt to the ground by Elisa.

Unlike the case of Clara and Sergio, we don’t see Marifer’s dead body after her supposed demise. Add to this Cesar’s wily “returned from the dead” stunt, where he fakes his death, and Marifer’s death begins to look very suspicious indeed. Considering the shattering realizations that have visibly derailed her, coupled with Alex’s newfound hostility towards her after finding out that she killed Sara, there is a lot left to be explored with Marifer.

In case Marifer somehow survives in the season 2 finale, we could even see her continue to dig into Sara’s death and find out about the mysterious project that Nicandro is involved in. Although it would be rather poetic if all of Abel’s daughters, including Marifer, die, marking an end to the twisted saga, wouldn’t it be even more poetic if his most cunning and psychotic daughter survives and continues to sow discord and chaos in the lives of Alex and others around her?

Will Rodolfo Continue His Vendetta Against Alex?

Throughout season 1 and season 2, Rodolfo’s perception of Alex remains volatile. He swings between being sympathetic towards Alex and blaming him for all of the family’s misfortunes, and the last we see of Rodolfo, he is clinging to the latter. After his sister Elisa is kidnapped by Sergio, Rodolfo, who is already reeling from his father’s (staged) death, accuses Alex of destroying the Lazcano family. Rodolfo swears to bring Alex down and even conspires with his mother Mariana on how to go about it.

Although his partnership with Mariana soon dissolves, Rodolfo is still very much at odds with Alex and plans on putting him back in prison. In a very “coming full circle” way, Rodolfo, in his new heartless persona, is referred to as Cesar on multiple occasions near the end of season 2. It, therefore, seems fitting if Rodolfo, who is always the most conflicted about going against his domineering father, steps into Cesar Lazcano’s shoes and continues the battle against Alex.

However, some developments occur that Rodolfo is unaware of when he is last seen. Most significantly, Elisa is saved. Additionally, Alex and Elisa both know that Cesar is still alive, and they might tell Rodolfo the same. This would neutralize two very significant grudges that the latter holds against Alex, and it might even be enough to forgive him. Also, Rodolfo laughing at the sight of his father’s casino burning to the ground tells us that maybe he is leaving Cesar Lazcano’s legacy behind.

Read More: Will There be a Who Killed Sara Season 3?