Why Did Will Smith Slap Chris Rock at the Oscars? 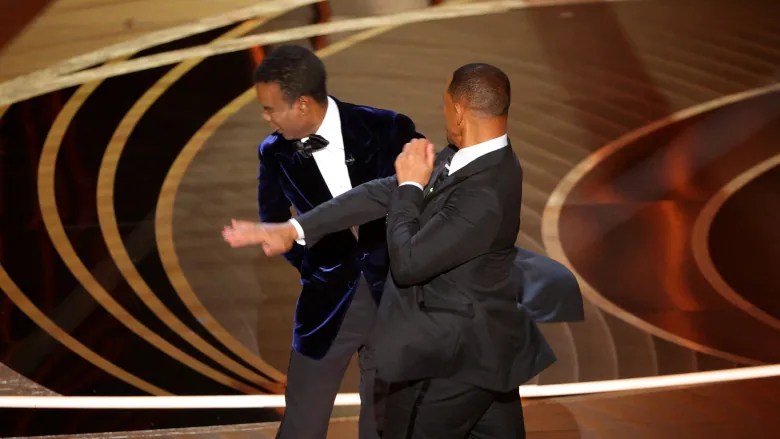 What just happened at the 94th Academy Awards?  The world witnessed Will Smith smacking stand-up comedian and actor Chris Rock on stage while the latter was presenting the Academy Award for Best Documentary Feature. Since the Oscar moment is unbelievably flabbergasting, one must be wondering what motivated Will Smith to punch a fellow artist. Let’s dig to understand what made Smith so furious.

Why Did Will Smith Slap Chris Rock?

As the Oscars 2022 was progressing, Chris Rock came onto the stage to present the Academy Award for Best Documentary Feature. While presenting the award, Chris Rock joked about Smith’s wife and actress Jada Pinkett Smith being in ‘G.I. Jane’ because of her shaved head. Soon after he was interrupted by Will Smith, who climbed to the stage and slapped him on his face. “Will Smith just smacked the shit out of me!” Rock said to the audience right after the incident. “Keep my wife’s name out of your fucking mouth!”, Smith shouted to Rock after punching him.

VIA JAPANESE TELEVISION: The uncensored exchange between Will Smith and Chris Rock pic.twitter.com/j0Z184ZyXa

Best Actor in a Leading Role goes to Will Smith for his incredible performance in 'King Richard' Congratulations! #Oscars pic.twitter.com/y0UTX48214

After the incident, Smith’s publicist Meredith O. Sullivan, Oscar producer Will Packer, and fellow nominee Denzel Washington talked to Smith during the commercial break. “Thank you, Dee. Denzel said a few minutes ago, ‘At your highest moment, be careful, that’s when the devil comes for you,’” Smith Revealed what Denzel said to him during the break. “I hope the Academy invites me back,” he also said with respect to the incident.

Smith’s wife and actress Jada Pinkett Smith had shaved her head after suffering from alopecia. “Now at this point, I can only laugh… y’all know I’ve been struggling with alopecia. Just all of a sudden, one day…it just showed up like that. Now, this is going to be a little bit more difficult for me to hide. So, I thought I’d just share it so y’all not asking any questions…Mama’s gonna have to take it down to the scalp so nobody thinks she got brain surgery or something. Me and this alopecia are going to be friends … period!” the actress said in an Instagram post.

As far as the real reason goes, there are also several theories out there. One of them is Smith’s motivation to slap Rock might not be limited to the joke Rock made this year. Rock did target Jada and Smith while hosting the Oscars 2016, which might have led the actor to carry grudge against the comedian. “Jada boycotting the Oscars is like me boycotting Rihanna’s panties. I wasn’t invited. That’s not an invitation I would turn down, but I understand, I’m not hating,” Rock said in his opening monologue back in 2016.

In the same 2016 monologue, Rock also joked about Smith. “It’s not fair that Will was this good [in ‘Concussion’] and didn’t get nominated. It’s also not fair that Will was paid $20 million for Wild Wild West. Okay!” he added. Even though years have passed since then, Smith’s reaction can also be due to his intolerance against targeting himself or his wife again.