A sequel to the 1988 film of the same name, the Disney+ fantasy series ‘Willow’ takes some time to get going, but once it does, it reveals itself to be a treasure trove of complexity and depth. In episode 7, titled ‘Beyond the Shattered Sea,’ the questers attempt to cross the Shattered Sea to rescue Prince Airk (Dempsey Bryk) from the clutches of the Crone while fighting their own demons.

Elora (Ellie Bamber) trains, as does Kit (Ruby Cruz), both dealing with questions about their place in the world. Meanwhile. Airk’s mysterious companion reveals certain truths about herself. Here is everything you might want to know about the ending of ‘Willow’ episode 7. SPOILERS AHEAD.

The episode begins with Airk and his new companion, Lili (Rosabell Laurenti Sellers), in the seemingly abandoned Immemorial City. Like Airk, Lili also drinks the questionable water from the fountain. Suddenly, Airk hears Kit’s voice coming from the water and dives into it. Meanwhile, at the base of the underground city of Skellin, as Kit sinks into the liquified abyss that Elora created with her magic, she sees Airk before Elora finally manages to break through the hardened surface of the ground, freeing Kit.

As the questers continue their journey, the relationship between Kit and Elora becomes worse than it ever was, especially because Kit revealed that she feels abandoned by her father because of Elora. Their travel eventually brings them to the Shattered Sea, a seemingly endless body of water that’s more sand and mud than water. The group encounters Zeb, the sleigh driver who is supposed to drive them to the Immemorial City on his silt sleigh, pulled by a Mudmander.

The questers accept Zeb’s invitation to have supper with him, during which Zeb claims that he used to be a Paladin in Cashmere, though his memories seem patchy. He states that he was sent out to find the missing Princess but recalls other adventures as well, apparently unsure why he is stuck as a sleigh driver in the middle of nowhere. In Immemorial City, Lili tells Airk that she is the Princess of Cashmere.

It’s Graydon who first realizes that Zeb is one of the Gales. He and the other questers get on the sleigh and ride for their lives with the Gales pursuing them. Graydon discovers he can perform magic after he is able to cast spells from his flute to fend off the attack by the Gales. After they reach a patch of land, Elora and Kit begin training in earnest in their respective fields, while Graydon forms a bond with the Mudmander, whom he names Kenneth after the male protagonist of the romantic farce he is writing.

As we have previously discussed, Lili’s sudden appearance after Airk has drunk the yellowish fluid is deeply suspicious. In episode 7, Lili accepts when Airk accuses her of bringing him to the Immemorial City. Given that Gales brought him there, and the Gales are the agents of the Crone, it’s safe to assume that Lili is indeed the Crone. The yellow liquid appears to be an extension of her power, which allows her to both control and communicate with her underlings. 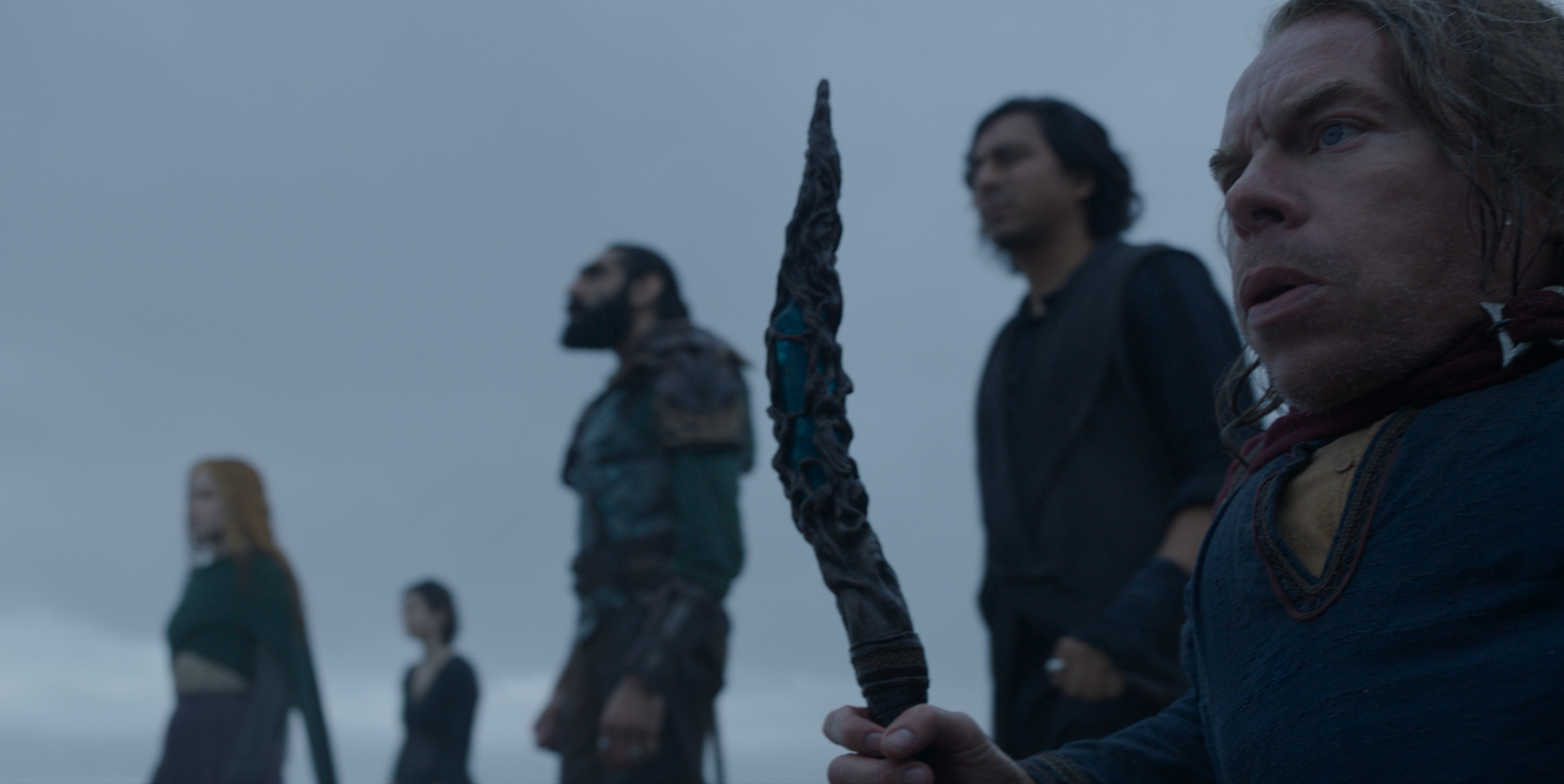 As Airk has drunk that liquid multiple times, the Crone easily overpowers his psychological barriers and takes control of him. By the time Kit and Elora get to the city, Airk is firmly under the Crone’s control. As Sorsha told Kit earlier, their family is important to the Crone. With Queen Bavmorda gone, her descendants are potentially the greatest vessels of evil. With Airk now under her control, the Crone can regain the strength she lost after Bavmorda’s fall.

Annabelle Davis – the real-life daughter of Warwick Davis, essays the role of Mims, Willow’s daughter and the only surviving member of his family. It is revealed in episode 7 that Willow’s son, Ranon, and wife, Kiaya — both of whom we meet in the 1988 film — are dead, and a part of Willow blames himself for it. He dreams in this episode that he has lost Mims as well. Believing it to be true, he wants to turn back and return home, but Elora points out to him that it can be something that the Crone showed to force him to abandon the quest.

Elora reveals that she knows that her death is inevitable if she were to confront the Crone. Despite knowing she is walking to her death, Elora accepts her responsibility, inspiring others, especially Kit. Together, they jump off from the edge of the world, ending up in the Immemorial City. As for Mims, she is most probably alive. Willow might have doubts about himself and his abilities, but he is still the person who defeated Bavmorda, the Crone’s greatest agent, with nothing except his intelligence. If he remains beside Elora and continues to train her, things might not turn out well for the Crone.