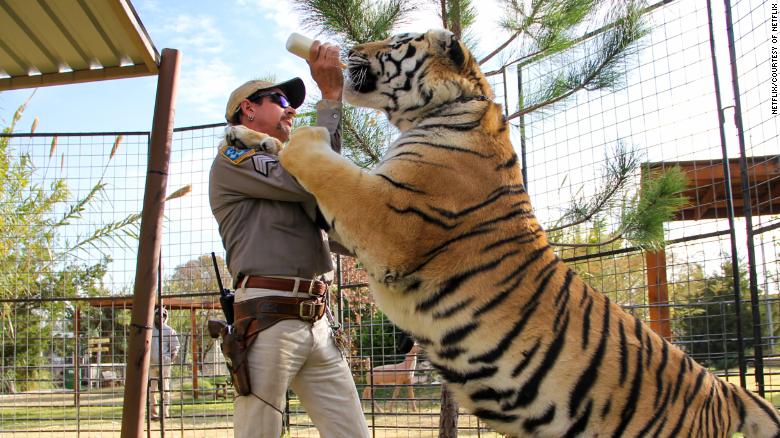 Undeniably, Netflix’s ‘Tiger King‘ has become an internet sensation. The docuseries has everything one could hope for, murder, madness, mayhem, and a bunch of extremely colorful characters. At the center of it all is Joe Exotic. The eccentric big cat owner, and his crazy antics, push the series forward. Since netizens are raving about the docuseries, they have decided to commemorate it through the venerated meme culture. Now, I could go on about how memes have become the modern-day equivalent of a global communicative language. However, that’s a topic for another day. For now, sit back and enjoy the best memes on ‘Tiger King.’

One of the most painful moments in the series is when Kelci gets her arm ripped off by a tiger. She’s made a recovery and did return to Joe’s zoo even after the incident. However, despite her support, Joe believed that the negative publicity from the accident would cripple the zoo’s sales, and bring him to financial ruin. It was an overstatement of sorts, and Joe’s words immediately became fodder in the meme world. Check it out below.

The inclusion of a parent’s reaction, juxtaposed with Joe’s words, makes this meme extremely relatable. After all, who among us, in our childhood, have not been scolded for carelessly leaving the lights on or the door open? Kelci’s accident is also captured in a meme from the perspective of those at the zoo. Joe informs them of the accident but coolly handles his business as well. The visitors’ reaction is captured excellently in the meme below.

joe exotic: so a tiger just ripped an employee’s arm off. y’all want a discount?

While Exotic’s words might have incited the first meme, his hairstyle has not been spared either. We see him sporting a mullet for most of the show. However, when he appears in a prison clip, his hair looks decidedly worse.

What my coworkers see during a conference call three weeks into quarantine after I’ve cut my own hair #TigerKing #Coronavirus pic.twitter.com/9irninJKma

Naturally, it has led to an extremely topical meme about the coronavirus lockdown, and how most of us cannot get our hair cut. Some have been brave enough to try to cut our hair, and I can sincerely attest that mine looks worse than Joe’s. No, you cannot see it! Finally, I come to my favorite Joe Exotic meme. Apart from being a big cat owner, he’s also tried his hand in music. One of the most iconic songs is “Here Kitty Kitty,” which exemplifies his feud with Carole Baskin, and shows Joe’s petty dig at the Big Cat Rescue head, about the disappearance of her second husband.

I’m inclined to agree with the arrangement of the list, except for the slight error. Nas’ diss aimed at Jay-Z is “Ether.” Meme-makers have not spared Joe’s run for the governor, either.

Undoubtedly, Joe was a unique candidate and did have an eccentricity about him when it comes to his apparel and appearance. The meme captures this perfectly. However, coming back to Carole, the internet has not shown her love. Netizens are convinced she killed her second husband.

Other people in the series have not been spared either. Among them is Jeff Lowe. He makes a contradictory statement in the docuseries, about his involvement in helping the FBI capture Exotic, and meme-makers have been quick to turn it into a joke.

Jeff Lowe: "So this is how I set Joe up." #TigerKingNetflix pic.twitter.com/3FsRByeHcx

If you’ve seen the late addition to the docuseries, “The Tiger King and I,” you are bound to be familiar with these two memes.

#TigerKing was so insane that by the time this guy pulled up with a skeleton riding shotgun I didn’t even blink and the show didn’t feel the need to explain it pic.twitter.com/tTzJloh74e

WHY IS NO ONE TALKING ABOUT THE RANDOM ASS INTERVIEW WITH ALLEN, IN HIS SHORTS, IN THE BATH TUB??! #TigerKing pic.twitter.com/u31u1xFg83

Reinke, a former employee, is seen driving with a skeleton next to him. Allen Glover, the first person Joe hired as a hitman, is interviewed in a bathtub. Both instances are referred to in the follow-up. However, Allen’s interview is laughed off as a silly production choice, while Reinke humorously states that the skeleton was his best friend.

The fact that the strange occurrence remains unexplained, and still doesn’t stand out, is proof of the craziness in ‘Tiger King.’ Ultimately, Joe Exotic has managed to divert our attention from the severe global crisis, due to the coronavirus pandemic. Just as memes serve to distract us, Netflix’s docuseries has also arrived as a timely distraction. It is captured excellently below.