A Night At The Kindergarten Ending, Explained: Does Tytus Get Expelled?

‘A Night At The Kindergarten’ is a comedy movie that revolves around a man’s effort to deter his girlfriend’s son from getting expelled. Directed by Rafal Skalski, the Polish Netflix movie details a group of parents’ simultaneous experiences as they prepare for the Annual School Play. Starring Piotr Witkowski and Lena Gora in central roles, the movie does a commendable job of explaining the struggles of parenthood.

Every parent participating in the play has their own issues to deal with. From their kids never paying attention to them to kids who feel afraid of their own parents, every family faces different obstacles that need to be overcome. The events of the movie are surrounded by jokes and frenzied situations. Originally titled ‘Noc W Przedszkolu,’ the movie highlights how difficult kids can be at times and how managing them is no small feat. Let’s dive deeper into the plot and the ending of the movie ‘A Night At The Kindergarten.’ SPOILERS AHEAD!

A Night At The Kindergarten Plot Synopsis

Eryk is an irresponsible man with no stable job. Even though he is a sound engineer, he keeps messing things up and remains unemployed on most days. His girlfriend, Dorota, has a son named Tytus. The little kid is difficult to deal with and has trouble keeping up in kindergarten. The Parents’ Committee of the Little Ray of Sunshine school organizes a meeting to talk about Tytus and the upcoming school play. 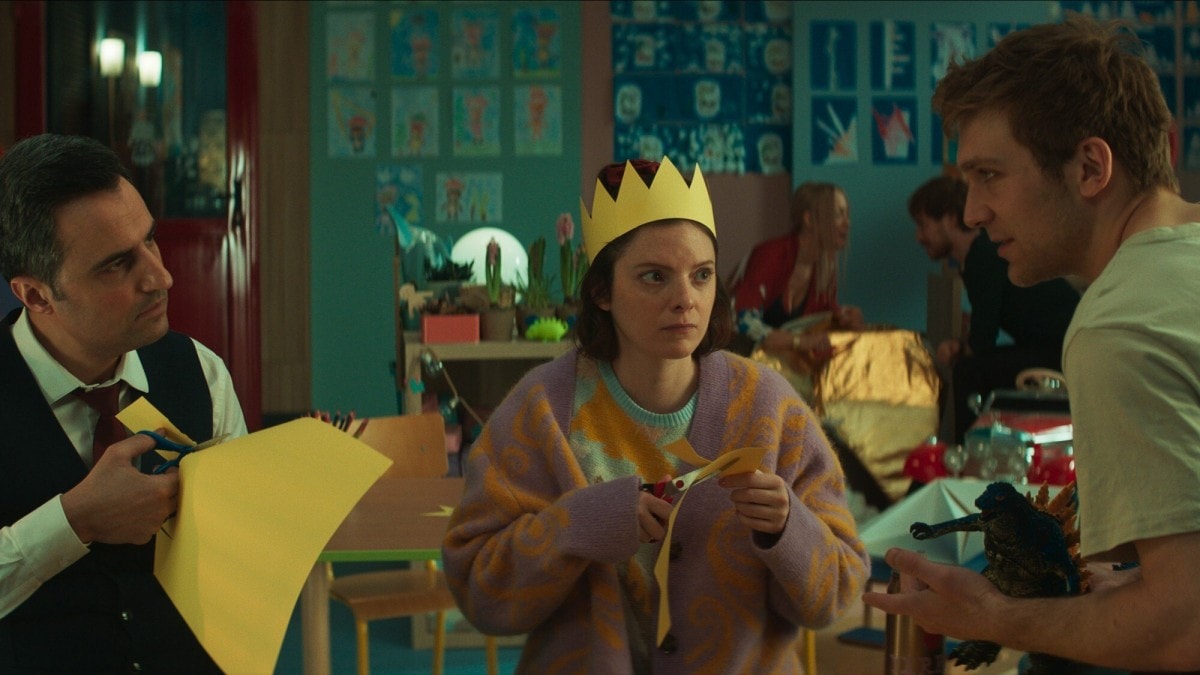 To prove that he is responsible and in an effort to get away from babysitting Tytus, Eryk goes to the meeting on Dorota’s behalf. He meets the head of the committee, Justyna, along with other parent members. After a brief introduction, Eryk overhears Justyna and Krystyna conspiring to get Tytus expelled from the school because of his troublesome behavior. All the other kids in the school have a problem with him because of his language and bullying actions.

While simultaneously rehearsing for the Annual Nativity Play, the parents talk about their individual struggles and problems. The other members of the committee include Tadeusz, Kazimierz, Kasia, Leslaw, Hamza, and Sandra. They share their journeys in parenthood, and how they dealt with the issues that arose. Meanwhile, Justyna and Eryk get engrossed in a battle of wits to convince everyone on the committee to vote for their benefit. Justyna wants Tytus expelled, whereas Eryk wants him to stay. Furthermore, Eryk believes Dorota will dump him if the expulsion happens on his watch.

As the night unravels, tensions mount among the members. The school director, Baska, is also evidently annoyed by Justyna’s bossy nature. Baska is unable to manage the school in her experiential way because of Justyna’s constant nagging. Eryk and Baska jointly execute a plan to put an end to her miserable attitude. Baska fakes a resignation, which ultimately sends every parent into a tailspin. They believe they won’t be able to find a better director, so they decide to change the head of the committee.

Eventually, they spiral out of control after smoking weed and drinking a little too much. They don’t rehearse for the play, and it eventually ends up being a mess. The parents trash the school in a frenzy and fall asleep. The next morning brings new trouble as the kids and other parents await the presentation of the school play. With everyone hungover, the play becomes a disaster. The consequent fate of Eryk, Tytus, and Justyna is revealed in the climax of the movie.

A Night At The Kindergarten Ending: Does Tytus Get Expelled?

After the parents prevent Baska from resigning, she backs out of the deal with Eryk. In exchange for getting Justyna removed from the head of the committee’s title, Baska had to ensure Tytus’s future at the school. However, at the last second, Baska informs Eryk that keeping Tytus in the school is logistically impossible. He needs constant care and attention to remain focused and disciplined.

Subsequently, Eryk returns to square one even after going through so much trouble. He resolves to make things right. They collectively come up with a plan to hire an individual caretaker for Tytus. By doing so, Tytus can remain under steady supervision and grow with time. Dorota also gets elated to know a solution and realizes that her son can have a proper education despite his troubles.

Eryk asks Tytus if he can come to school with him as a caretaker and a friend. This shows Eryk’s growth as a person as he takes more responsibility. Furthermore, it gives Eryk and Tytus a chance to bond and connect with each other. Consequently, Tytus agrees with a gesture as he gives Eryk his headphones back. Their relationship can finally start off fresh. Tytus’s drawings of Eryk as a superhero ignited a new spark of love and connection between the two. It persuaded Eryk to make an effort to repair his relationship with Tytus.

It is ironic to see an irresponsible guy like Eryk taking up such a task for his girlfriend. At the beginning of the movie, he laughs at parents with kids and deems kids as devil spawns. On the contrary, Tytus’s drawings become the game-changer as he finds himself caring and loving the kid. Also, he started out just to keep his girlfriend happy, but later his motives change as he truly wants the best for Tytus. Eryk even calls Tytus his stepson but loves him like his real son.

What Happens To Justyna?

Justyna is portrayed as a strong and fierce lady. She takes her role as the head of the committee very seriously. As the movie progresses, we learn that she beats cancer and emerges victorious after battling the disease. Consequently, she puts her life into perspective and teacher her daughter to be a fighter as well.

The primary reason behind her stubbornness to throw Tytus out of the school is that he locked her daughter, Kinga, in a box. Kinga cut her arms and spill her blood in the box as she was all scared and alone. However, Krystyna reveals to Justyna that Tytus did not lock Kinga in the box. Kinga did so herself because she was afraid to go home to Justyna. After discovering this, Justyna starts to fall apart. She threatens and curses all the parents around her. In a furious rage, she points a gun at everyone, and it accidentally goes off. Subsequently, she gets startled and passes gas. Hence, everyone bursts out laughing.

Justyna gets embarrassed and runs out of the room. In the morning, as the parents prepare for the play, Justyna finally comes around and promises to be her real self for her daughter’s sake. She removes her wig and accepts herself as she is. In the end, Justyna understands the value of being authentic and honest with yourself over the value of being strong all the time. She realizes the pressure she had been putting on her daughter to be strong and perfect constantly.

Eventually, Kinga is surprised to see her mother without her wig and embraces her lovingly. It’s essential for children to view their parents as humans before anything else. Parents should feel okay with being vulnerable and letting down their perfect facade in front of their children. Kids learn what they see. Hence, this way, they will learn to be honest about their emotions and more open to sharing and expressing themselves.

Read More: Where Was Netflix’s A Night at the Kindergarten Filmed?