12 Best Anime Maids of All Time 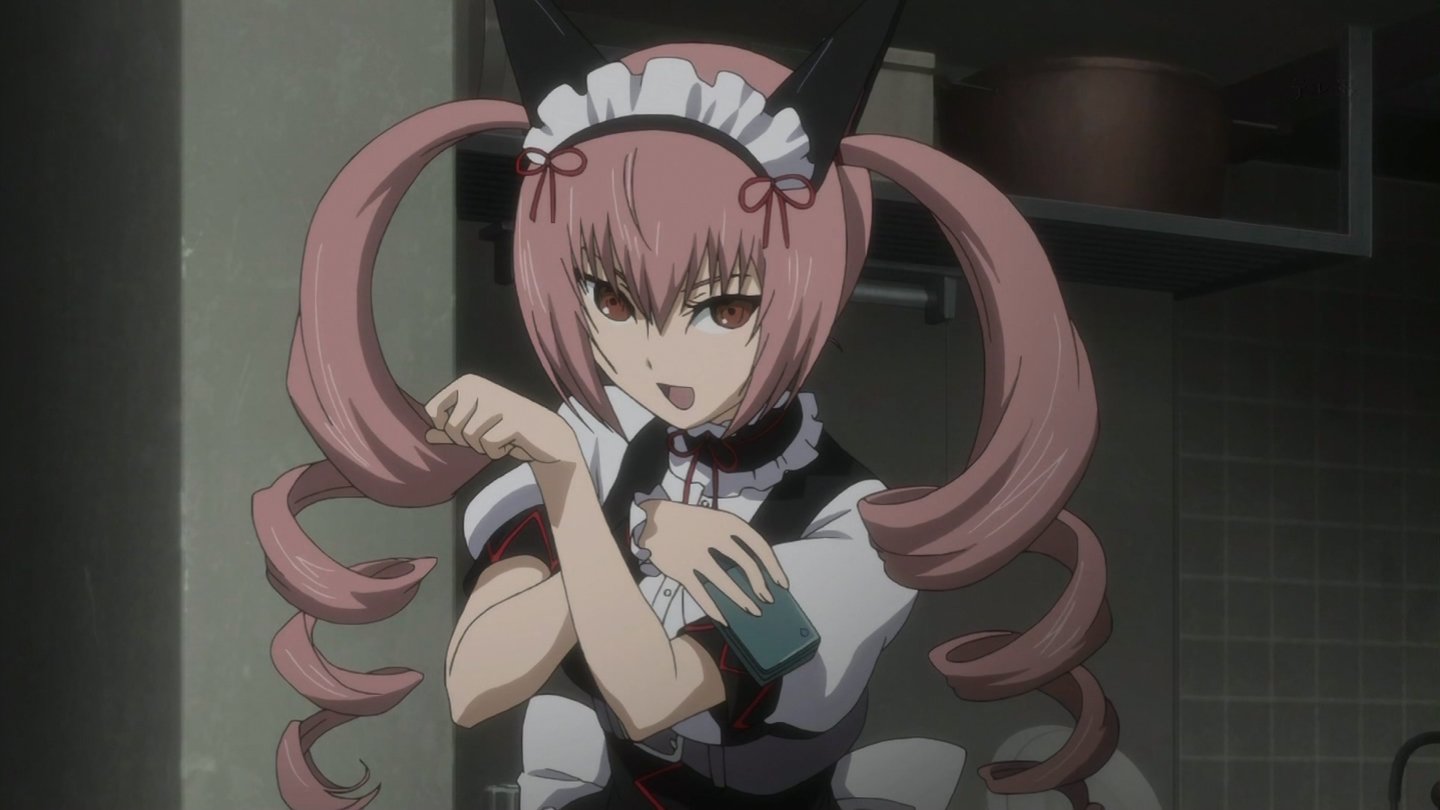 Back in 19th Century Europe, conservative maid uniforms were introduced. These uniforms have now taken a more modern turn and their sexiness is amplified with revealing versions of their designs. These modern maid outfits have now become a major part of the Japanese Otaku culture. Cosplays, maid-cafes and, of course, anime maid costumes can be spotted pretty much everywhere these days. Many writers add maid characters either for the ecchi factor or just for the kawaii. These maids can be helpful to a certain character in one way or the other or they could just be protectors or secret admirers of some kind. The aura of maid anime might have faded a little over the years, but it has certainly not come to an end.

While most people would simply imagine a maid to be someone who chimes “Yes Master!” every time she gets a task to do, anime maids come with many eccentric personalities and surely at least one of them is bound to become your favorite character. So today, we bring you a list of sexiest anime maids who are not only the typical maids who do housework and look after the people they serve, but also have highly distinctive personalities of their own. 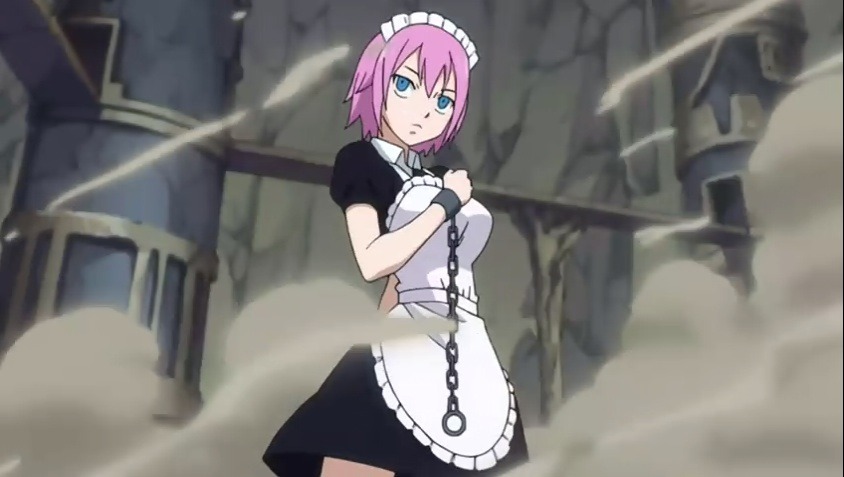 Virgo, also known as “The Maiden”, is a celestial spirit who is owned by an aspiring Mage named Lucy. She wears a typical maid costume along with shackles wrapped around her wrists. She has short purple hair and blue eyes. She has a small stature while she is with Lucy but before that, she had a huge gorilla-like appearance with a huge overweight body. She is obedient to everyone on Lucy’s team but is willing to do anything for her master Lucy. She is also quite a masochist and is always looking for a spanking from her master Lucy regardless of whether she has done something right or wrong. She has a lot of respect and loyalty towards Lucy and even calls her “Princess” a lot of times. 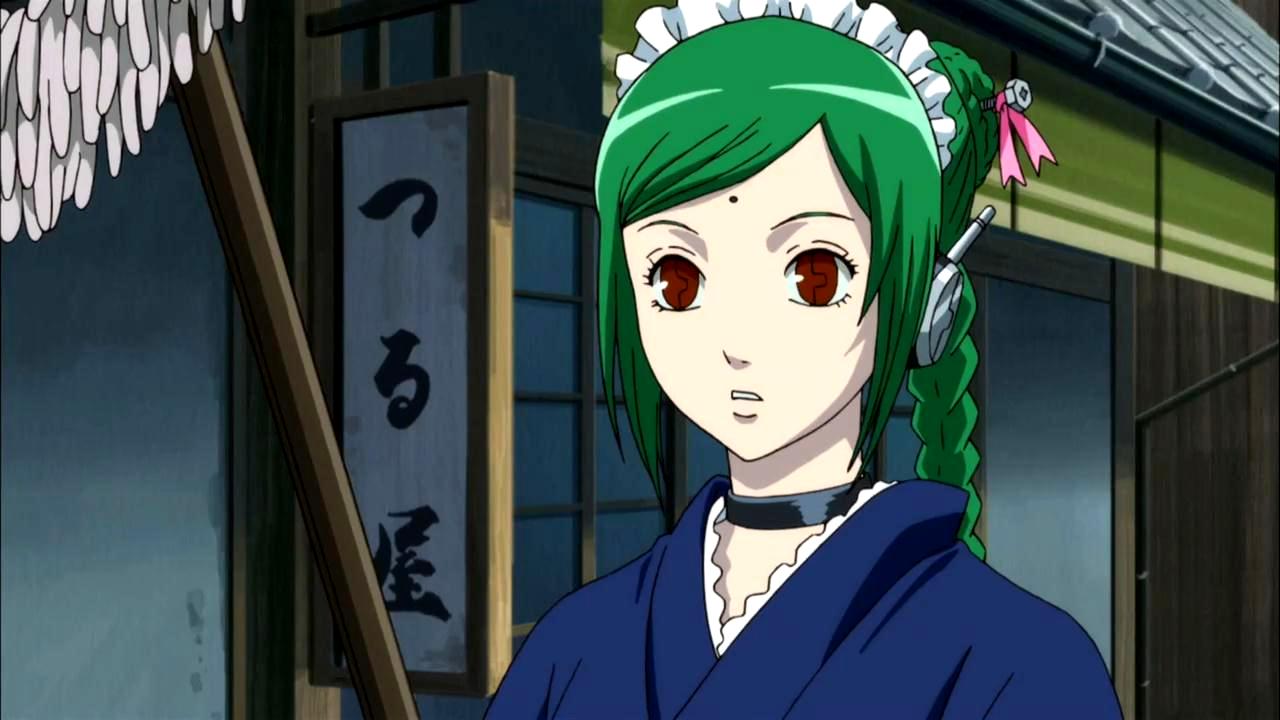 Tama, also known as No. 0, is a maidroid designed by Professor Hayashi to take care of his sickly daughter. She later works as a maid at the Otose Snack house and is often given the task to collect rent from Gintoki. Deep inside her is this element known as the “seed” which is an outcome of the professor’s experiments where he tried to implant his daughter’s personality traits into her. But the whole process went wrong somehow and the professor ended up killing his daughter. Even then, some of his daughter’s traits were implanted into Tama and this allows her to retain some human emotions despite being a robot. Tama has long green hair that is pulled back and tied up into a large bun on top of her head with a screw. Her outfit is a blend of a typical Japanese blue colored Yukata along with a French maid apron. She also carries a broom that she uses for both cleaning and for fighting. 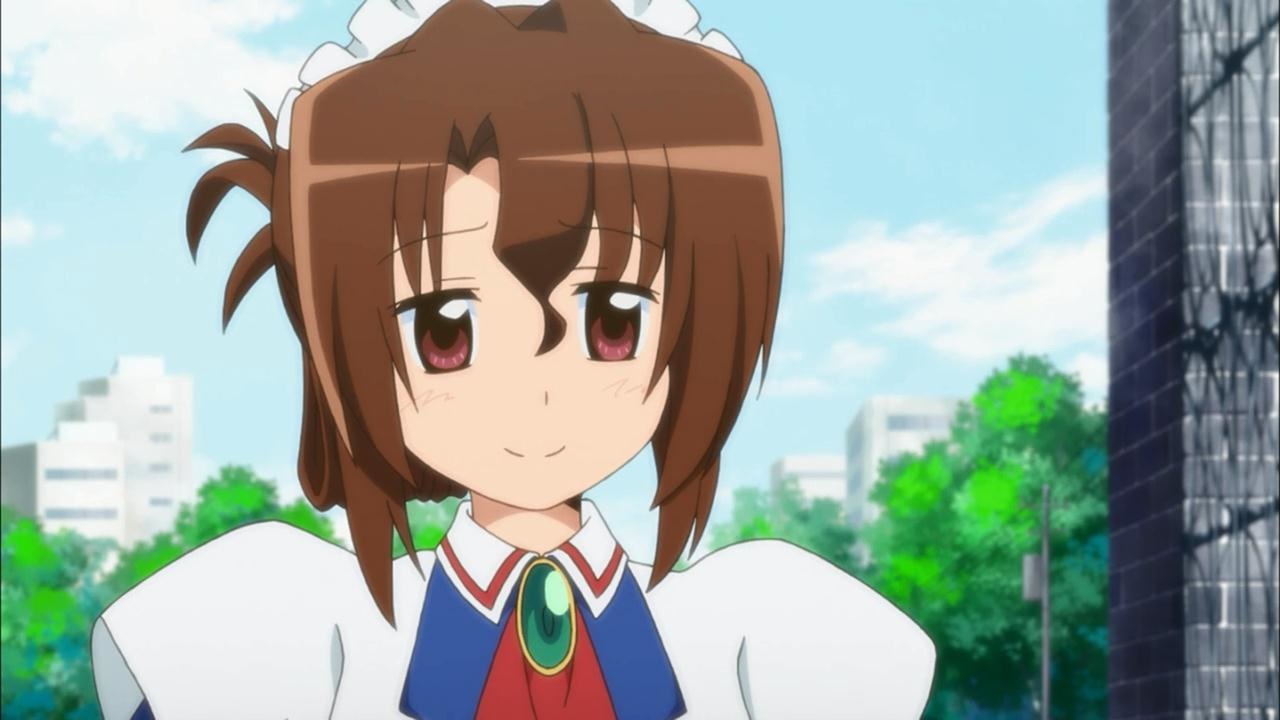 Maria, who was once Nagi’s home tutor, is now her personal maid and really cares for her like she’s her own family member. She is almost like an older mother/sister figure for Nagi and is one of those few people who are able to understand her relationship with Hayate. She has long brown wavy hair that is kept open when she works and is clipped back when she is working. She is seen in her maid uniform almost all the time. She is the smartest person in the entire house and manages pretty much everything except for money related matters. Apart from all of this, she is also very caring, kind-hearted and enjoys playing games from time to time. She is a well-rounded maid and it is nearly impossible to find someone who is as perfect as her. 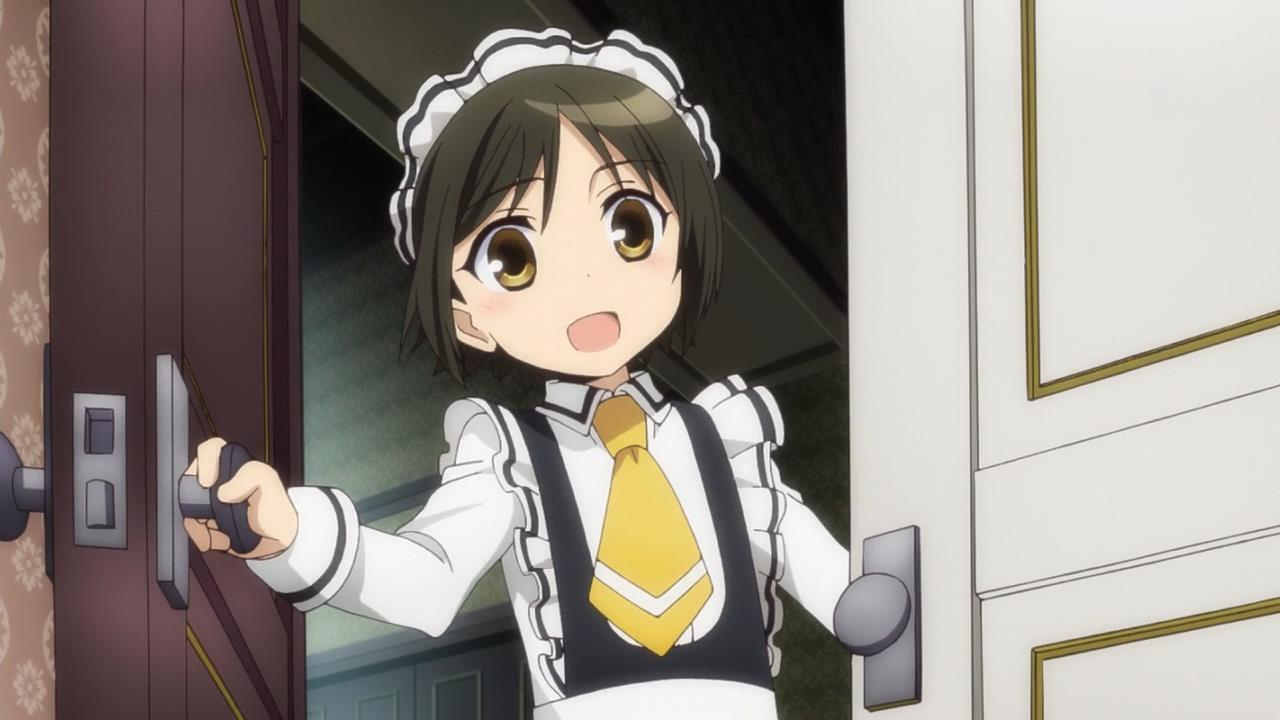 Unlike most other anime maids, Chihiro is actually a boy who starts working as a housekeeper at his uncle’s place after his mother’s death. He keeps the entire house really clean and also proves to be a really good cook. Chihiro has big olive eyes and he wears a typical French maid costume that has a yellow tie on it. Chihiro looks exactly like his mother and because of his whole maid get-up, people often assume that he is a girl. He is a hygiene freak and is the perfect maid for his uncle, who is a complete slob. He cooks meals for himself and Madoka almost every single day and often, his strict disciplinary methods clash with his uncle’s laid-back attitude. For an elementary school kid, Chihiro is an excellent maid that anyone would be very lucky to have. 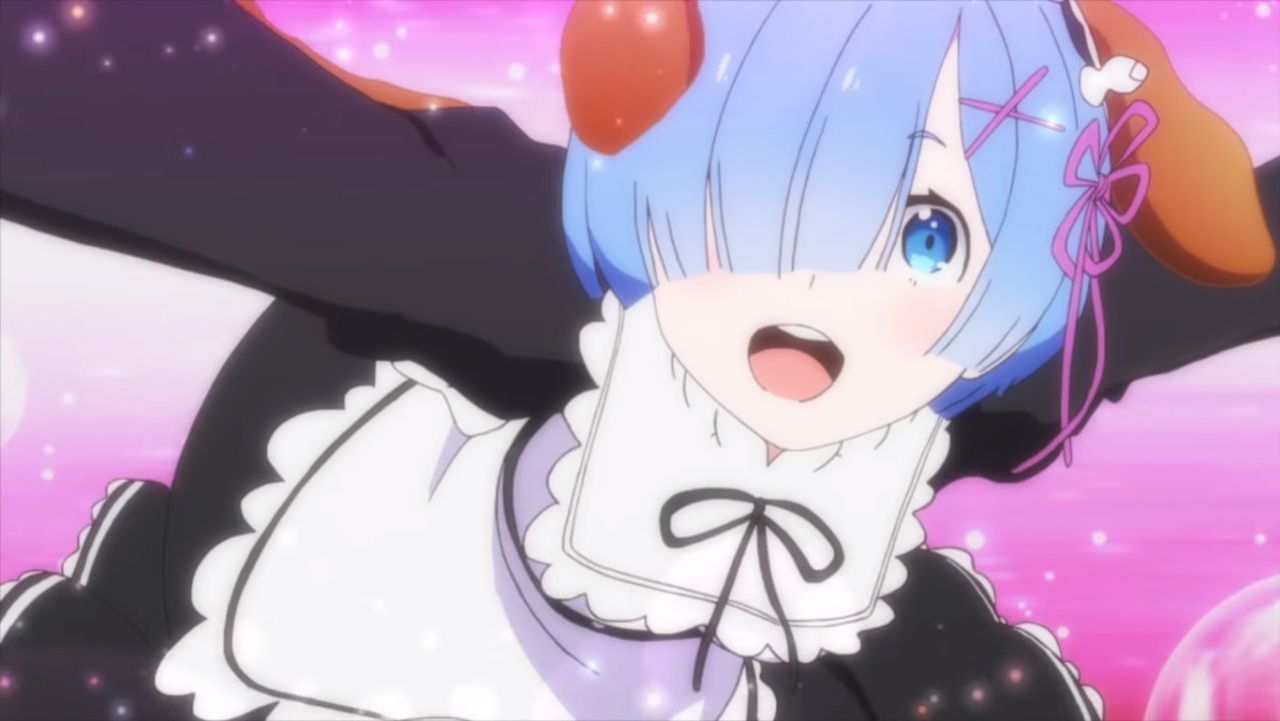 Rem is one of the two maids who works for Roswaal L Mathers. Roswaal is known to be a well-renowned noble of the world and along with Rem, a demon named Ram is another maid. Ram is really skilled as a maid and Rem is not able to match her level but she can cook, sew, clean and maintain Rowaal’s home better than most others out there. One unique thing about her is that she can also use her demonic powers to cure the ones she truly cares for. She has short light blue hair that covers her right eye and her visible left eye is blue in color. Ram and Rem look alike and the only difference between the two is their hair and eye color. Also, Rem is slightly curvier than her sister and she often tends to secretly change her measurements. She holds a lot of respect for her sister and even looks down on herself when she’s with her. She speaks in a very superficially polite tone and a lot of times, she does things without even thinking about them. 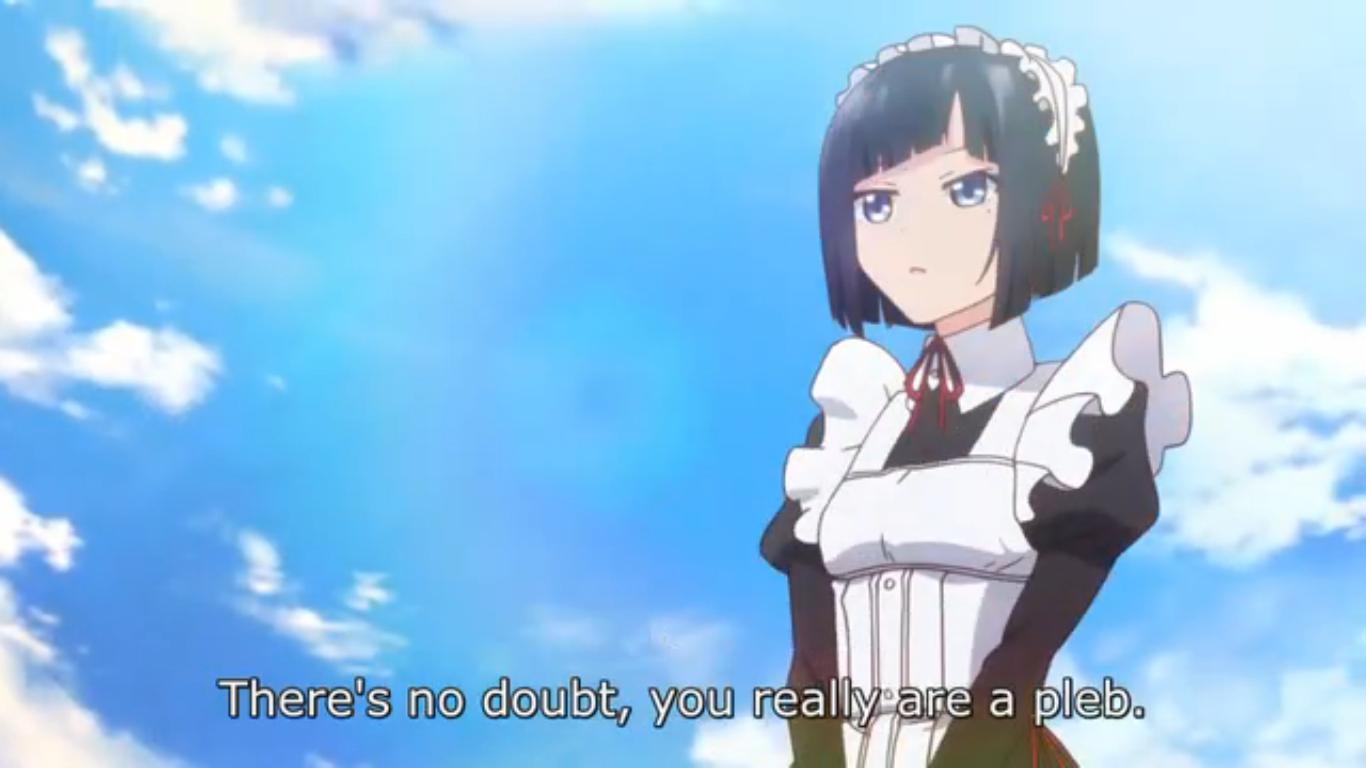 Miyuki is one of the main characters of the Shomin Sample series and she is Kimito’s personal maid. She is a beautiful young girl who has short black hair and deep blue eyes. It’s on Miyuki to make sure that Kimoto meets all his needs on time. She also has the responsibility of making sure that Kimoto does not get into any shady business and focuses on his school work. She can be a little sadistic towards him when he defies her but she also looks after him all the time and even watches him when he sleeps. But apart from being a caring maid, there is something more to her that makes all other maids look up to her. On the outside, she is really smart, caring and kind-hearted but deep inside, there is something very mysterious about her. 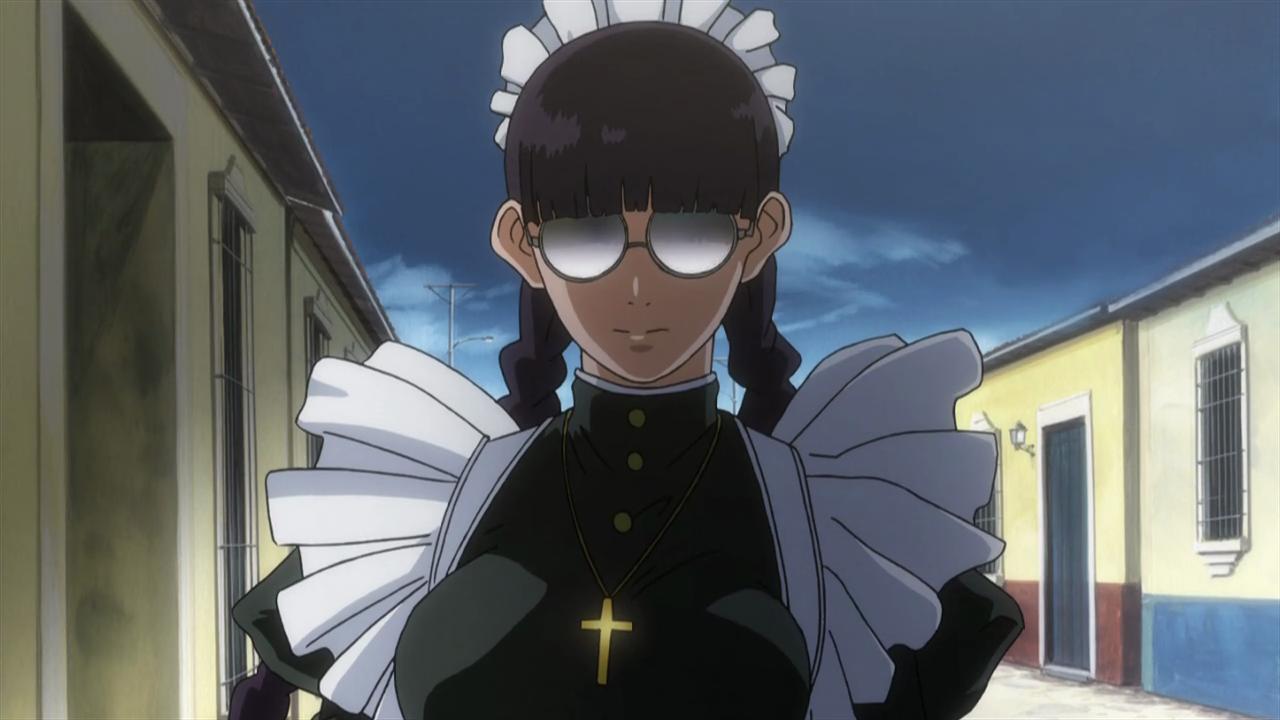 Rosarita Cisneros, who is also known as Roberta, has served as a maid at the Lovelace Family household for several years. The Lovelace Family is known to consist of some of the most powerful people in South America. As a maid, Roberta is not all that great but what really makes her stand out is her devotion to her master and the extent to which she can go to protect the family she serves. Even though she is only a maid in the present events of the series, just by looking at her, one can tell what a badass she is. She’s an ex-terrorist and also an assassin who is trained to kill anyone who gets in her way. Out of all the maids on this list, she is indeed one of the deadliest out there. 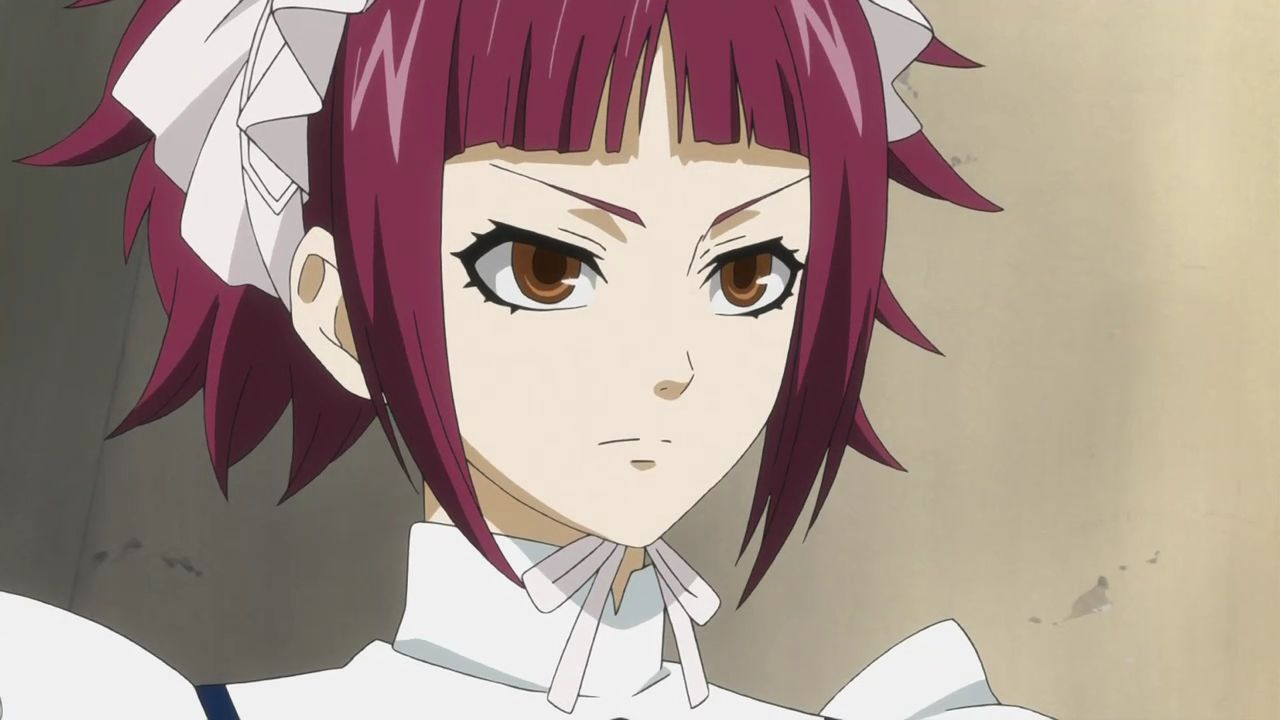 Mei-Rin, also written as Meyrin, is a maid who works at the Phantomhive household. She is slim and wears a typical maid costume — blue dress with ruffles on her shoulders. She has maroonish-red hair and she keeps them tied up all the time. Her eyes are hazel and she has extraordinary visions which she tends to hide behind a pair of oversized round glasses. She is extremely clumsy and is really bad at her job. She often tips over and knocks things down while working. Though her glasses impair her true vision, she does not take them off as they hide her true identity. At the Phantomhive household, she might be a shy, clumsy little maid who does not know much about her surroundings. But she actually has secrets of her own and behind this innocent personality of hers, she is quite badass. 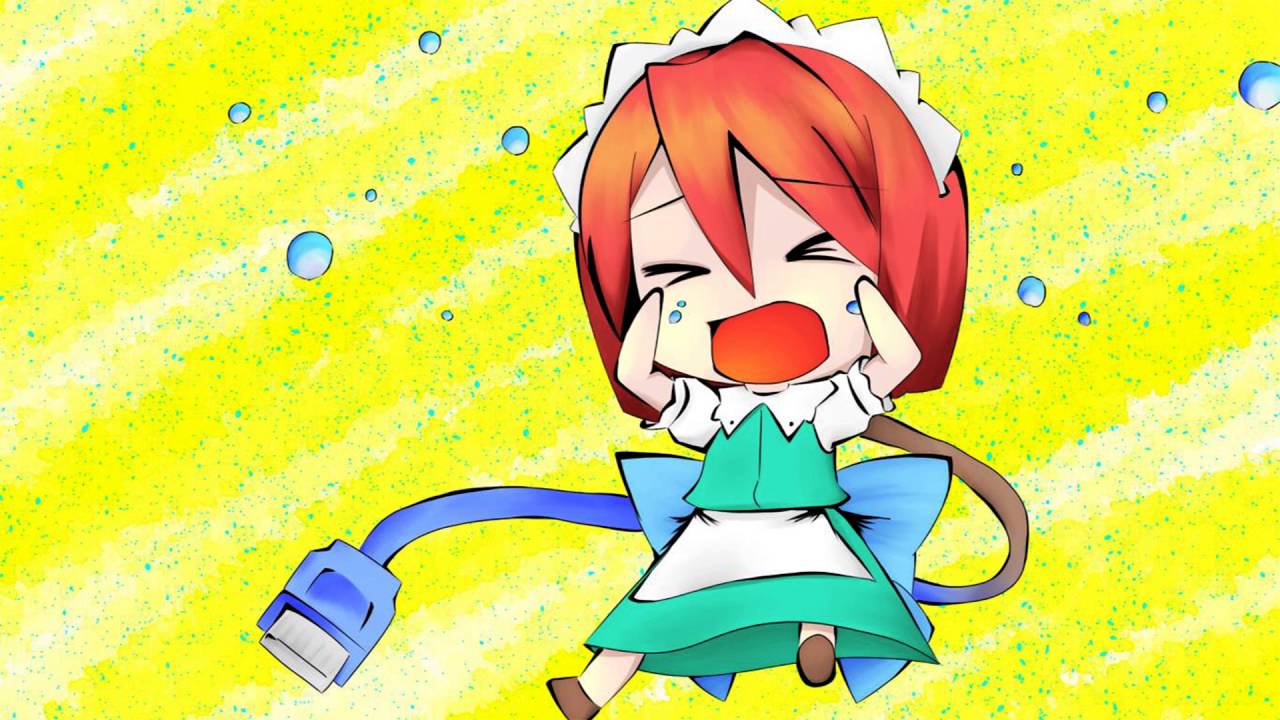 Ryuunosuke is a student at the Suiko Academy. She completely relies on AI to send a reply to all of her messages and emails. She develops this Artificial Intelligence to an extent where it takes an actual 3D form of a maid and is able to give advice based on what she can find on the internet. Now this maid is confined to electronic media-based communications only, but she is the kind of maid that we would all like to have. She makes Ryuunosuke’s life so much easier and also uses her voice to interact with people on online group meetings. She may not be able to cook or clean houses like most other maids on this list but she is indeed very helpful. 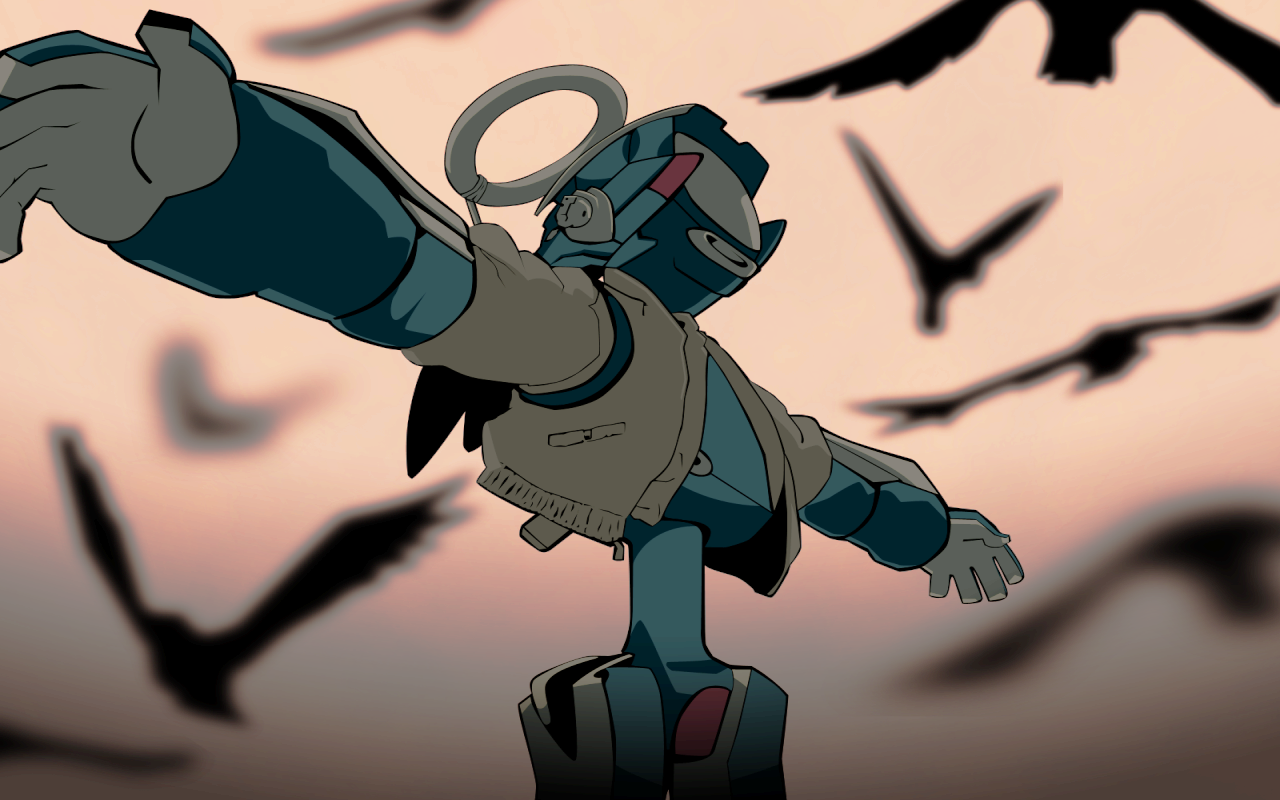 Kanti is nothing but a robot who emerges out of Naota’s head. He strongly resembles a Sony 8-301W portable TV set and is often referred to as “TV Boy” by Naota’s father. Canti has a lot of cool abilities and was initially designed as a medical robot. But in the current events of the series, he does everything from cleaning, to washing dishes, to taking care of everyone in the family with an apron on. He may not exactly look like most other maids on this list but everything he does at the Nandaba household makes him qualify as one. And c’mon, who wouldn’t love to have a giant robotic creature as a maid!

Rumiho Akiha is a second-year student at the Kanaria Private Academy. She works as a part-time maid at a maid cafe called “MayQueen+Nyan2”. She behaves very childishly and is more like a childish demon when it comes to men. She also adds an embarrassing “meow” to all of her sentences and has this strange ability to look right into people’s hearts just by looking into their eyes. She is quite simple compared to other maids on this list and it’s this simplicity that makes her this really cute girl. She is more of a supporting character in ‘Steins; Gate‘ but even then, she can grab your attention with the little screen time that she gets. 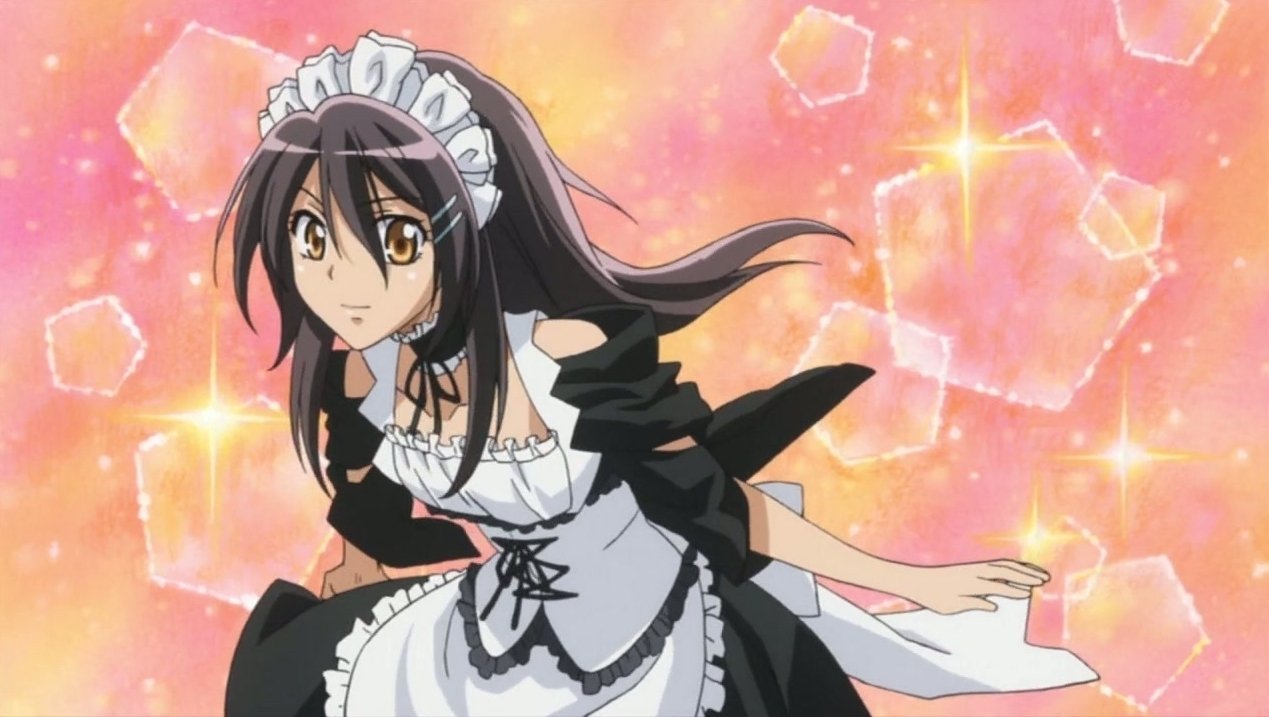 This list would obviously be incomplete without the most well-known maid, Misaki Ayuzawa. She is the main protagonist of the ‘Maid-Sama‘ series who goes to Seika High School. At school, she is this dominating Student Council President who is often referred to as the “demon president”. Her father abandoned her at a very young age and to make ends meet, she helps her mother by working as a maid at a maid cafe. She is really judgmental towards men and firmly believes that all of them are unreliable.

Ayuzawa is really intelligent and excels at everything in school. But because of her family’s debt, she is forced to study in a school full of delinquent boys who do not know how to behave properly. She manages to tame all of these boys with her strict rules and quickly becomes the favorite student of all teachers. But she is also afraid that if someone finds out about her life as a maid outside the school, she will not get the respect that she presently gets. As a maid, she has to be really polite and nice to all the people she serves, which is the complete opposite of how she treats the boys at school. Her secret eventually does come out but it leads to far better things than she could have ever imagined.