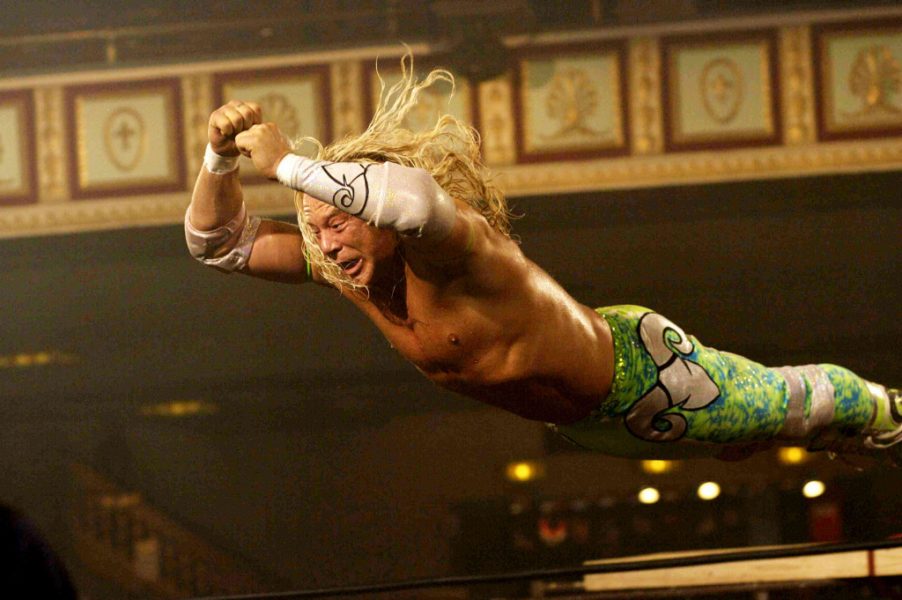 With his soft voice, alarmingly sweet smile and soulful eyes, Mickey Rourke was the heir apparent to Brando and De Niro, destined for greatness. He settled into roles easily, inhabiting the characters he portrayed with an ease and natural ability that was impossible not to notice. He started his career in two of the biggest flops ever made, Steven Spielberg’s 1941 (1979) which he followed with Michael Cimino’s Heavens Gate (1980). But with a small role as a dangerous arsonist in Body Heat (1981) he proved to have bite you on the nose talent, and everyone noticed. That soft voice could quickly lower and he could be ferocious in a heartbeat.

The man was electrifying. Lee Strasberg, the gifted though dangerous head of the revered Actors Studio called his audition “the most extraordinary I have seen in thirty years” high praise indeed considering the actors he had worked with. Over the next ten years Rourke was one of the most sought after and admired actors, at least by other actors. Studio executives and producers loathed working with him, he was demanding and difficult, often for the sake of being so. At one point, because he felt like it he brought two members of the Hells Angels with him to an important meeting. His wife left him, he found drugs, his movie career started to wane, so he decided to launch his professional boxing career.

When he came back, slowly with work for Coppola in The Rainmaker (1997), Sean Penn in The Pledge (201) he finally broke through as Marv, the gigantic killing machine in Sin City (2005). Two years later he was the talk of the town with the performance of his career in The Wrestler (2008) which earned him his first and only Academy Award nomination for Best Actor. The haunting performance felt as much like the actors life as it did Randy, the broken down, over the hill Wrestler the actor was portraying. Gone were his good looks, his face looking like smashed hamburg, red and blotchy, the result of to many punches and too much plastic surgery. But the eyes were still there, and familiar, and that same sweet smile remained, as did the talent, that beautiful talent. With that said, here is the list of top 10 Mickey Rourke films that prove he is a great actor. You can watch some of these best Mickey Rourke movies on Netflix, Hulu or Amazon Prime.

In a film reflecting the life of its star, Rourke is magnificently broken and tragic as Randy the Ram, a once great pro wrestler, now in his fifties, pushing sixty, who loads his body with all manner of drug to keep going. Pain killers, steroids do the trick, allowing the wrestler to continue to do his thing in the ring, though no longer in stadiums now in high schools with a retro audience watching these old men re-live their glory years. Rourke is superb as Randy, struggling to re-connect with his angry, loving daughter, hoping to have a relationship with a pretty over forty stripper portrayed brilliantly by Marisa Tomei, and always hoping for a comeback in the ring, thought he works in a deli slicing meat to make ends meet. Often unrecognizable, but the eyes are his, that voice is his, and the soul he brings to Randy are his. His finest work, and then he squandered his comeback. How sad.

This controversial thriller sees Rourke as Harry Angel, a private eye in the early fifties, hired to find a band crooner from the pre WWII years who owes a debt. Drawn into the world of dark magic in New Orleans, he encounters a young princess of voodoo, beds her, then appears to murder her. Little does he know he is being played by Louis Cyphere, (say it fast) and that he is in fact the man he seeks, having made a deal with the devil. His realization leads to a startling breakdown, one of the best onscreen. His haunted face will stay with you a long time after the film ends. The scenes with he and Robert DecNiro, as Cyphere, have an immediate intensity you feel the moment they are together.

Under heavy make up as Marv, the gigantic, muscle bound killer in this wildly original film, Rourke attracted the attention of Hollywood again with a wild performance that never lets up. Waking up next to a dead hooker he did not hurt, Marv makes it his mission to find her killer and rampages in and around Sin City to find who hurt her. On the way he mows down anyone and everyone in his path. It is a hugely enjoyable performance that in a wicked fun film. A very physical performance, with Marv throwing off one liners that catch us off guard with the dark humour. His fierce protection of women makes him tragically noble.

Rourke is sublime as a thinly disguised version of writer Bukowski, exploring his time in Los Angeles, named in the film, Chinaski. Vulgar, filthy, a drunk, his life is looking for the next drink, and a place to flop for the night. Should he have company for the night, so be it, but one has to wonder who would be attracted to such a mess? Faye Dunaway gives what might be her last great performance as his lover, also a drunk, the two of them struggling to come to terms with their life. Before his fall from grace, this was among his last great performances.

Imagine being the best at whatever you attempt? You are blessed with a gift that will become your curse, and only a few recognize it. One man calls him “a prince in the wrong time” which is perfect. Rourke is The Motorcycle Boy, we never know his real name, which adds to his mythology. He has returned to the slums that he grew up in, from California, and at once is embroiled in the stupid street gang politics that drove him away in the first place. Partially deaf, he moves through the world on a different plane, strangely majestic, yet doomed by his own blessings. Rourke is superb in the film, creating a young man, wise beyond his years, who knows he is not long for the world, and though saddened, he is ready. An outstanding adaptation of a much loved teen novel that became a dark, expressionistic black and white film directed by Francis Ford Coppola.

Michael Cimino directed this overtly racist film that has Rourke as Stanley White, a much decorated New York detective placed to bring down crime in Chinatown. But crime is on the rise, a young drug lord is flexing his muscles bringing cocaine and heroin into the city. White will attempt to bring him down, but will pay dearly for his actions. His wife, nagging him to get her pregnant will be murdered, he will have an affair with an Asian TV host and she will be taped, he loses nearly everything in his pursuit of this villain. Rourke gives a brilliant, sometimes over the top performance that you cannot take your eyes off. The funeral scene is particularly great, but the film around him collapses into a negative portrait of Asian Americans.

Two brilliant, mercurial actors go toe to toe with each other as cousins caught up in a scheme that get them killed. Rourke is outstanding as Charlie, the smarter of the two, while Pauline is portrayed by the astonishing Eric Roberts. The chemistry between the pair is electric, each elevating the other to greater heights. Rourke is superb in the less showy role of the confident, tryouts not to be classy Charlie, always picking up the mess his brother has left behind. How I wish the screenplay had done them justice, and they had a director who understood acting. His Charlie exudes cool.

This was his breakthrough performance. Cast as Boogie, the hip, decent young hair stylist who loves women as much as he loves gambling, Rourke was a star once this was out. He was superb as the young man in the fifties who ends up afoul of the local gambling dude, owing him far more than he can afford. There is a wonderful intimacy to the performance, the way he speaks softly as though it were just to you. It was really the first time he disarmed audiences with that sweet beautiful smile, but it would not be the last.

In this tiny scene, we first see him, Teddy, lip synching to Bob Seger as he instructs his lawyer how to build a bomb. Gently, quietly but with firm authority, he makes it clear the man should not be doing this. He offers to do it for him, the lawyer refuses. As he did in Diner (1982) he spoke quietly, with intimacy as though you were only person in the world he was speaking too. It was wondrous to behold such talent. Cunning, dangerous too, we can see in his eyes though he is happy to help his lawyer, he would be happier setting the fire himself.

Reunited with Coppola seventeen years after Rumble Fish (1983), Rourke is cast as a dangerous lawyer with mob ties, hell, he might be the mob for all we know. He has been disbarred, but his firm continues to practice hiring lawyers that do the work for Bruiser (no kidding). In just a few scenes the actor establishes that he is not a man to be trifled with, that he walks in, likely has conquered dangerous men. It was the beginning of a long comeback for the gifted actor.