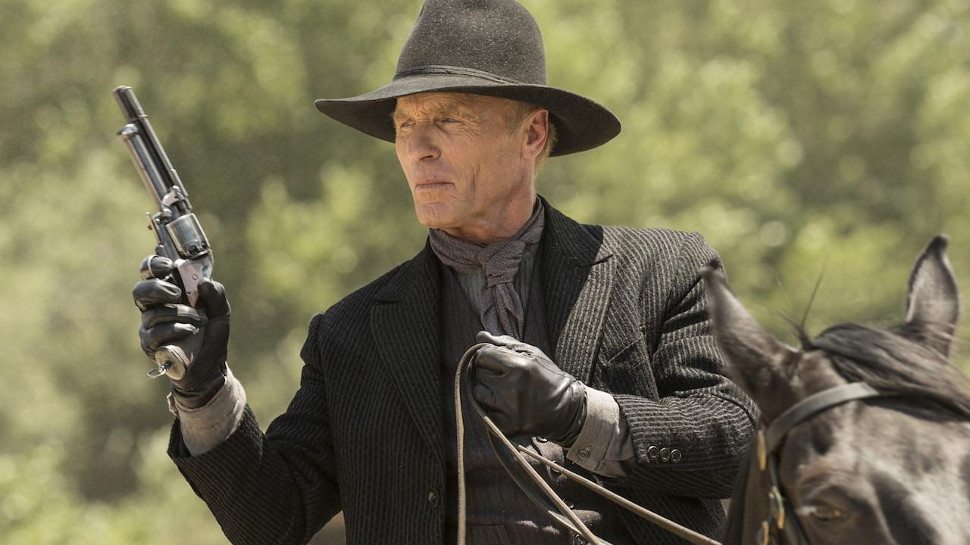 What are the best Ed Harris movies? Before we list down his best films, let’s briefly look at his career.

Most of us became aware of Harris in 1983 when he had two plumb roles, one as astronaut John Glenn in the American epic The Right Stuff (1983) and secondly, a disturbing, haunting performance as a government assassin in Under Fire (1983) both films among the finest of the decade. Over the next thirty years, Harris became one of the most impactful and reliable character actors in movies. Comfortable as lead or supporting, he is attracted to the role, not the size of it, but the part itself.

Moving back and forth between stage and screen, Harris quickly became an icon in movies, respected by his directors and peers, admired by his audiences and critics.

A whole new audience discovered him this last year as the dangerous Man in Black in HBO’s Westworld which has him up for an Emmy for supporting actor.

His voice catches when he tells Truman, “I am the creator of…a TV show” because he is also the God of that world, overseeing every aspect of Truman’s life. As creator and producer of The Truman Show, he has created a program that everyone else but the star, knows it is a television program, he believes this is his life because Christoph, portrayed with quiet authority by Harris has made it that way. But when Truman starts to suspect something is wrong with his life, Christoph is forced to think on his feet and alter the course of his hero’s life. Like a loving father, protector and mentor he watches his boy, but when even he cannot find him one night, he is not beyond using his power, “Cue the sun”! Even the name suggests a higher power, Christoph. Brilliant, and he should have won the Academy Award he was nominated for.

Long a passion project of the actor, bearing a striking resemblance to his subject, he raised the money, worked on the Screenplay and directed this film about the gifted though troubled artist Jackson Pollock. His work was abstract expressionistic, created from drip painting, a form he perfected to his own unique style. In the late forties through the fifties, until his death in 1956 he was among the most celebrated artists in the country, and after his death, his work became obscenely valuable. Harris is extraordinary as the difficult, tortured artist, fighting booze, battling his obsession with women, funneling his explosive energy into his work. Harris the director beautifully guides Harris the actor to his first and only Academy Award nomination for Best Actor.

In another of his biographical performances, Harris was nominated for, and should have won the Academy Award. Portraying Gene Karan’s the flight director at NASA, it his responsibility to get the astronauts into space, and get them back. So when there is a problem with the Apollo 13 craft, Kranz, knowing the lives of the men hang in the balance, tells his scientists that “failure is not an option.” They go about finding a way to bring the man’s home, all under Karan’s watchful eyes. And brilliant not them back he does. Focused, intense, single-minded, Harris is a revelation.

Harris is frightening as Oates, the mercenary who moves from country to country assassinating who he is told to kill by the government. With the happy grin of a loopy psychopath he carries out his business as just that, a cold calculated business that just happens to be murder. God at the film’s beginning he does not even know who he is fighting, but he does in Nicaragua where he proves to be far too efficient at what he does. It is a bold performance, furious in its intensity, alarming in its realism.

When Russia beat America into space, the Mercury Astronaut program was fast tracked with the hopes of getting a man into space, to the moon in fact. The Mercury program would see several men go into space, the most famous being John Glenn, who became the face of the space program, a decent, good man, though mocked by the others as a Boy Scout. Fiercely protective of his deaf wife, he makes it clear not even the president gets in to see her. A huge, rollicking adventure, beautifully anchored by Harris and this exceptional cast.

Harris is outstanding as Presidential nominee John McCain, who listens to his advisors and foolishly takes on Sarah Palin as his partner on the ticket. Little do they know her knowledge of basic American and world history is suspect, her political knowledge weak, at best, and she becomes a national joke. Yet she brings in money, and McCain knows it. He also knows he has doomed his chance for President by having her on the ticket. Harris is superb as McCain, a war hero, a great American, who but for one bad decision, might be President.

Harris does almost all of his scenes sitting on a window ledge as AIDS rots his body. Brilliant as a famous poet, the adult version of a child we encounter earlier, traumatized by childhood events, Harris does remarkable work again with precious little screen time. Nine, perhaps ten minutes? And yet he is ferocious as this doomed poet who will shock us to the bottom of our soul from that same window sill.

In a major blockbuster it is tough to give a fine and thoughtful performance, yet that is exactly what Harris gives us in this underrated film about aliens living beneath the sea. Knowing the only way to contact them to protect them he allows himself to sink to the ocean floor where the pressure should kill him. Rescued by the gentle creatures he is shown why they are here, and convinces them not to destroy humanity. It is a solid, lived in performance unincumbered by the effects.

Possibly the most purely despicable character he has ever portrayed, an angry ex husband with a vast knowledge of firearms and the outdoors. Locking horns with anyone who comes in contact with his ex, this is a frightening character. Though outwardly calm, it masks a storm of a man raging within, who will without hesitation commit murder. The film failed despite some fine performances and an interesting message.

As a terribly scarred criminal, Fogerty, I am not sure the actor has never been this intimidating. He enters a small diner in a small town and begins to call a man by a different name. You see he knew him in a different time, and those scars he wears were put there by this man. A vicious gangster from Philadelphia, he has come to take this man to his boss, but finds it much harder than he thought. Quiet, aloof, confident, he exudes danger.