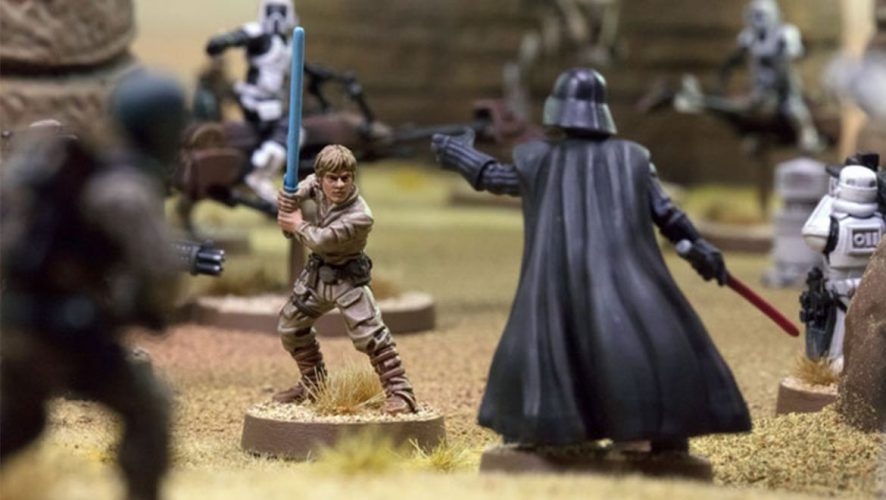 After 2017 saw exceptional board games in the form of ‘Azul’, ‘Luxor’, and ‘The Mind’, 2018 continued the trend of terrific board games setting high standards like never before. From battling in ancient Japan to deciphering codes, the following list consists of the many wonderful experiences offered by board games over the last year. Here is the list of top board games of 2018: 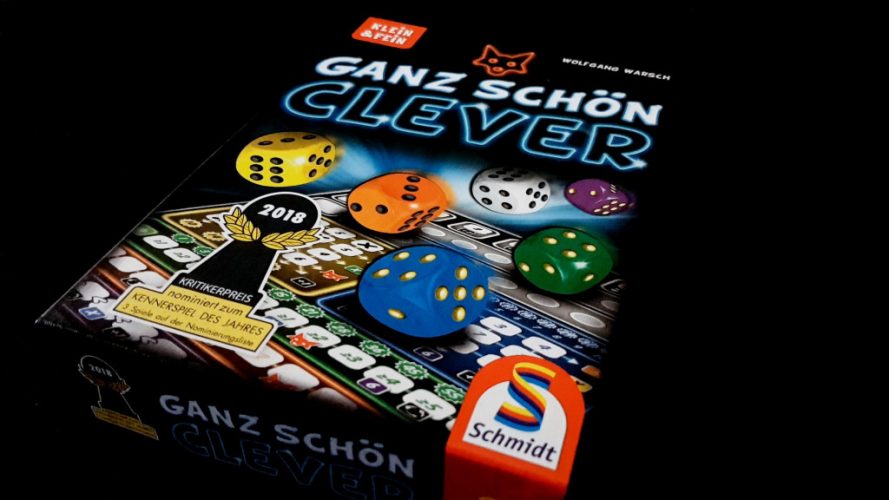 ‘Ganz Schön Clever’ translates to ‘That’s Pretty Clever’ from the German. At the outset, such a name will sound quite puzzling but once players get a feel of the addictive game from designer Wolfgang Warsch, they will realise that it is indeed quite clever to excel at this game. This is a game based on luck but also on presence of mind. Once the dice gets rolling, there’s no end to how the coloured areas will be matched and complex scoring opportunities will be chained together seamlessly by the most skilled players. ‘Ganz Schön Clever’ is accessible to both rookies and experts, which is a great drawing factor. Leon Schiffer’s artistry is the icing on the cake. 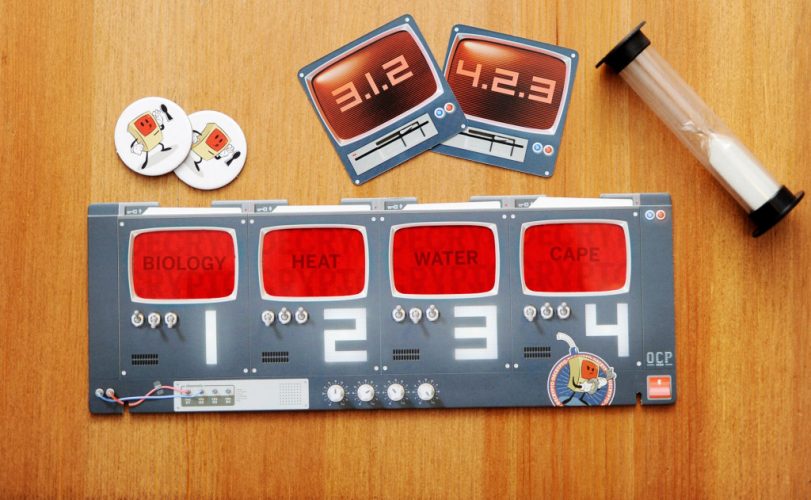 There’s just something oddly satisfying in solving a code. To crack open the formula and see meaningless signs form important messages right in front of our eyes is among the greatest of thrills. ‘Decrypto’ by Le Scorpion Masqué is built on the same sentiment. Not only does the game demand rapid thinking, it also calls for cooperation and understanding among teammates. Its unique structure of linking words with numbered codes is an important part of the exercise. Success depends on the alternate worlds used by a member closely associated with the words that their team possesses. Designer Thomas Dagenais-Lespérance and artists Fabien Fulchiron, NILS, and Manuel Sanchez come together to create a party game that is of a distinctly intellectual kind. 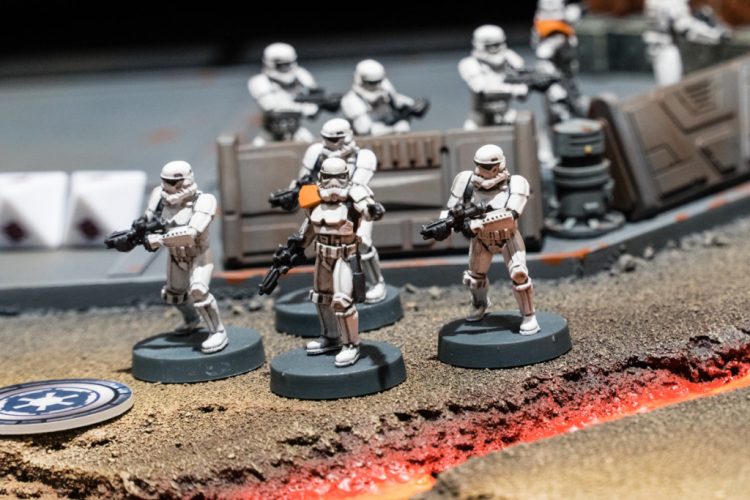 In the many ways the vast universe of George Lucas’ space opera has been explored through films, books, and games to name a few mediums, board games have always been inadequate in representing the high-octane battles between the forces of good and evil. ‘Star Wars: Legion’ sought to fix this situation, and succeeded in doing so, with a gripping depiction of infantry warfare. Set against the backdrop of the Galactic Civil War, players command an army of miniatures consisting of troopers, powerful vehicles, and even legendary characters such as Luke Skywalker and Darth Vader. The game is multilayered, replicating various battle conditions but also accessible with its easy-to-assemble nature. Whether it is as the authoritarian Galactic Empire or the brave Rebel Alliance, the game lives up to its promise of delivering authentic ‘Star Wars’ fun. 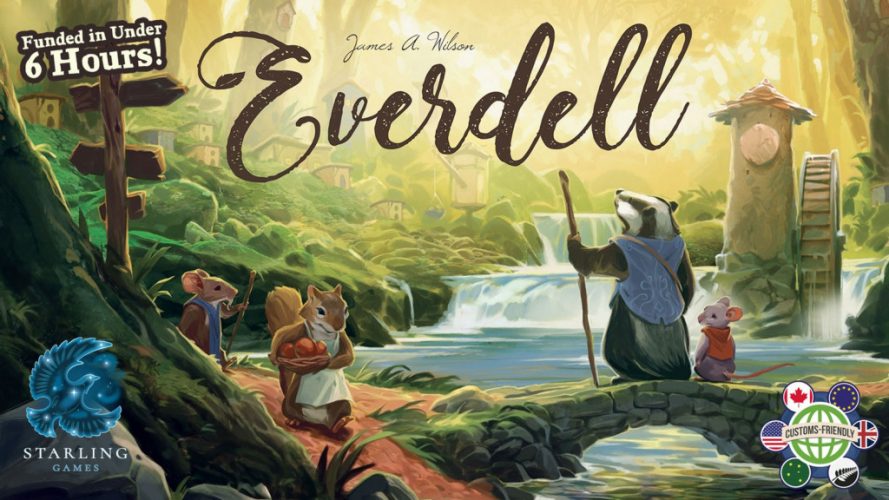 The aim of any board game looking to make a mark is to go beyond the board to create vivid, indelible images of its setting in the players’ minds. The charming forest civilisation of ‘Everdell’ certainly fits the bill. Players play as the leader of a group of critters whose aim is to build the perfect city using the resources at their disposal, including Workers and cards that generate resources and grant special abilities. James A. Wilson designed an intelligent game that puts a wonderful spin on the city-building genre, while Andrew Bosley’s masterful visuals brought the soaring trees and winding streams to life. Definitely a must-play. 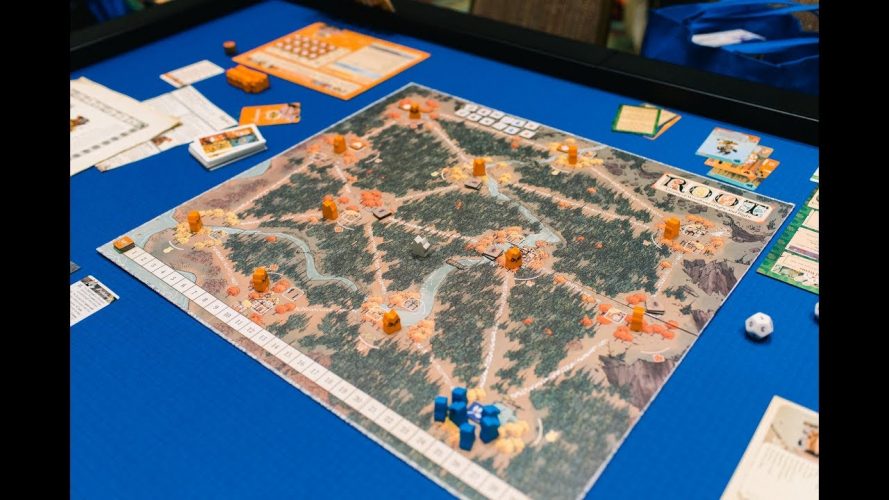 Imagine a great woodland full of riches, usurped by a nefarious feline ruler. Following her unjust rule, the forest’s creatures have come together in an alliance to throw the cats over. In the middle of this strife lie the opportunistic vagabonds who venture out on the most dangerous of paths through the forest lands. At the very edge lie the Eyrie, the ancient rulers of the woodland who seek to regain control of their kingdom. The fantastic ‘Root’ is a mesmerising game of strategy played out among these four factions: the Cats, the Alliance, the Vagabonds, and the Eyrie. Players have different functions to carry out, such as maintaining order, recruiting forces, fighting other factions, and capturing territories. It is up to the players to control the narrative, and this is what makes ‘Root’ one of this year’s very best. 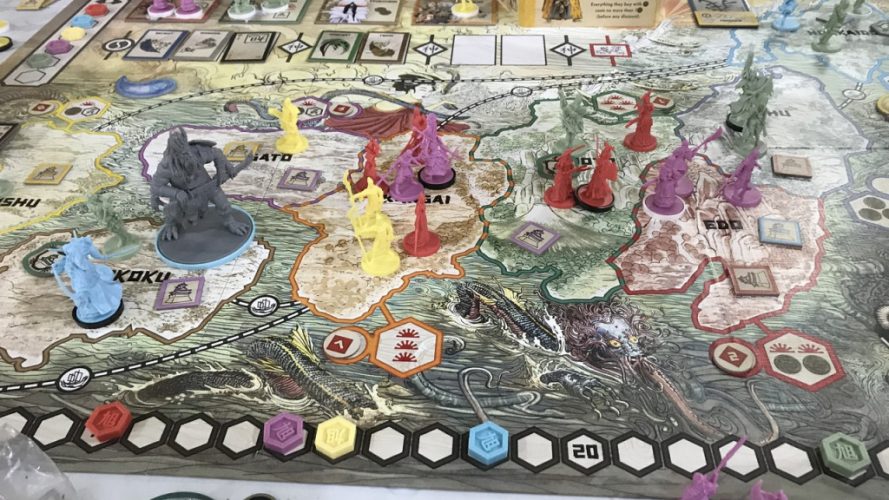 Following in the footsteps of the excellent ‘Blood Rage’, ‘Rising Sun’ displays much of the same qualities that made that game so popular. This shouldn’t be much of a surprise, seeing as both the games have industry veteran Eric M. Lang as their designer and Adrian Smith as one of the lead artists. ‘Rising Sun’ is set in feudal Japan where players need to deal with hostile factions through combat and strategy. Another objective is to be able to negotiate for better alliances and attain advantageous positions in war. Against the backdrop of the ancient gods, or Kami as they are called, returning back to rebuild the empire, their favour needs to be won and risks need to be taken. ‘Rising Sun’ rewards players for thinking intelligently and showing a shrewd bent of mind, making it an obvious choice among the best board games of the year. 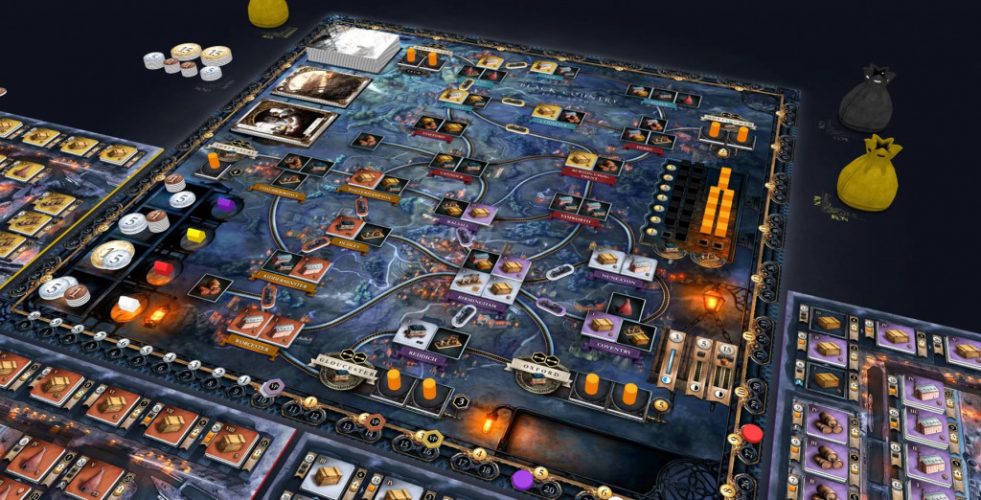 Being a pivotal time in all of human history, the Industrial Revolution has naturally been influential on modern means of production and business. As such, this storied time has been varyingly depicted in several media. ‘Brass: Birmingham’ is yet another representation of the time, and acts as a great sequel to the superb 2007 game ‘Brass.’ Players don the role of entrepreneurs who need to establish their industries and build a network to score the most points. They can build, develop, sell, take a loan, and expand a network, much like its predecessor. Additionally, they can scout for a wildcard industry. Set across the canal and rail eras, the game also has new industry types in breweries, manufacturing, and pottery, each with their unique perks. ‘Brass: Birmingham’ not only acts as a capable sequel to its impressive progenitor, it also improves upon its overall experience of being in business during the most eventful time for being so. 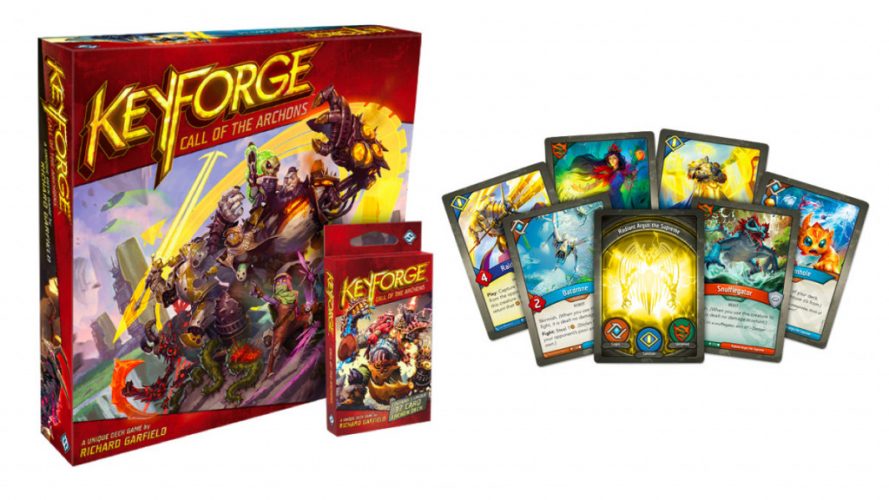 Renowned game designer Richard Garfield conceptualised a truly innovative idea in the form of a unique deck game, wherein no single deck is as same as the other, giving way to impossibly different playing scenarios. ‘KeyForge: Call of the Archons’, is this game, where the eponymous godlike beings reside in the Crucible. This is a world as unique as its inhabitants, being built from the fragments of innumerable planets across the stars. These Archons clash with one another, leading to quests to find the Crucible’s hidden vaults to gain limitless knowledge and power. Players use their unique Archon deck to lead their army and use the beasts, technology, and artefacts of a chosen House to gain priceless æmber, battle against enemies, and forge enough keys to unlock the vaults. The game’s sense of balancing strategy with benefit is immaculate, and has lead to some of 2018’s most engrossing playing sessions. 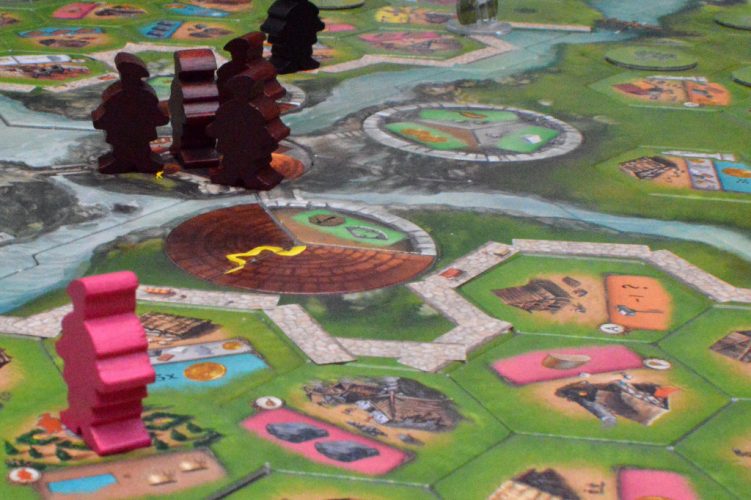 More often than not, board games are played in the moment. The present move is the most important for the player to get right, and once that’s done with, the collective attention moves on to the next move. However, there’s a select brand of board games where every move a player makes has an equal bearing on the outcome. ‘The Rise of Queensdale’ is one such game. The game puts us in the shoes of a master builder whose aim is to build a castle and city worthy of your king and queen. With legacy-style mechanics at play, every decision taken is of utmost importance. From collecting raw materials, building structures, developing boroughs, to gaining the king’s support, every decision will tantamount to whether Queensdale remains standing or falls to the other scheming builders.

Board games based on crime aren’t new, with iconic games such as ‘Scotland Yard’ and ‘Cluedo’ having been around for a number of years. Lucky Duck Games’ ‘Chronicles of Crime’ takes a more technological approach to the genre with great effect. Using a set of characters, locations, and items, the game puts the player in a host of different crime scenarios where the goal is to catch the culprit in the shortest time possible. This may not sound very atypical, but the game uses a mobile app and virtual reality glasses to depict a hyperreal crime scene for the players to look for pertinent clues. Every physical component has a unique QR code that changes according to the scenario being enacted out, imparting an unbelievable versatility to the game’s core components. ‘Chronicles of Crime’ arguably has the most novel use of technology in any kind of game, board or otherwise, making it one of 2018’s veritable best.