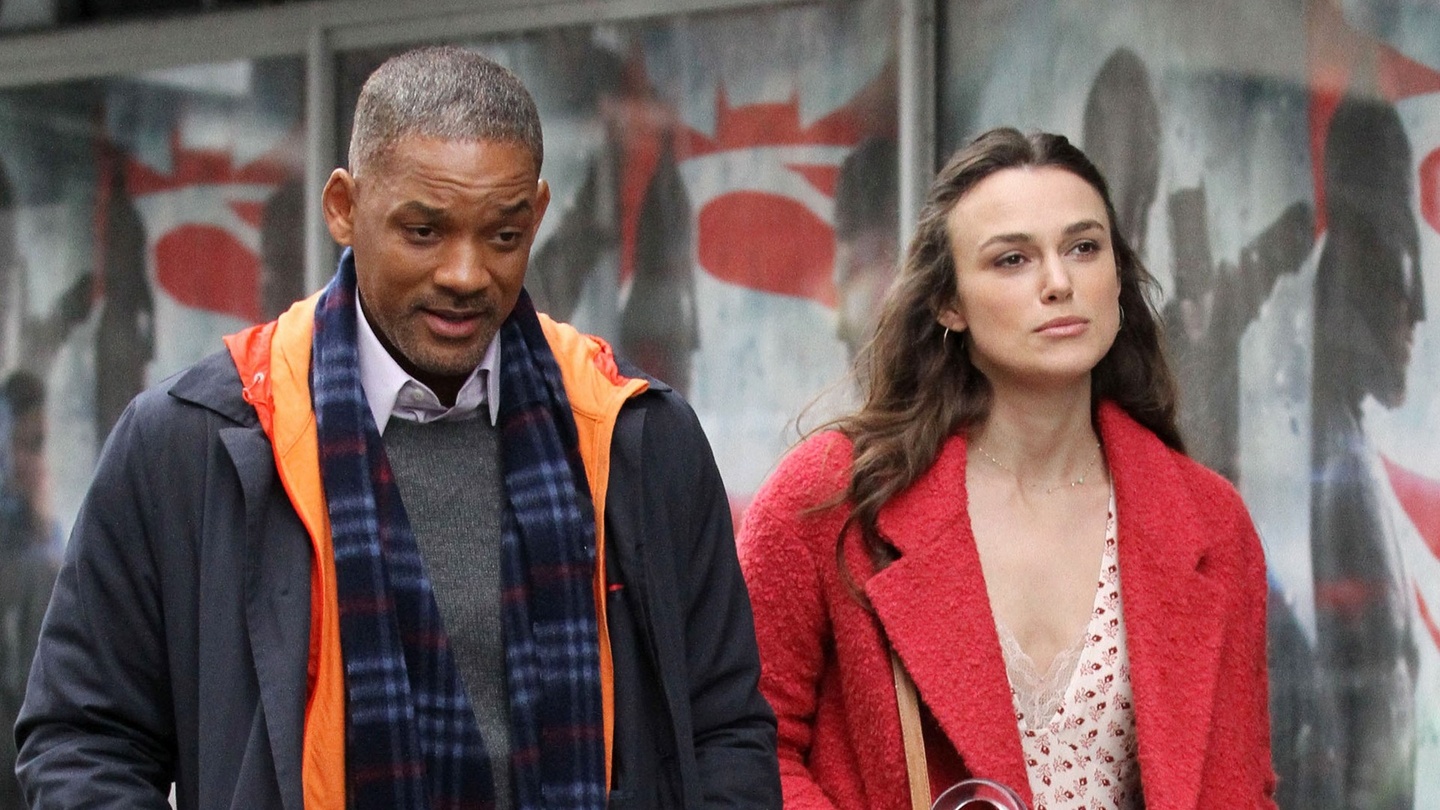 Human actions are driven by three abstractions — love, death, and time — but these are also subjective notions. Some reject love, while some pursue it relentlessly. Some lend their time to live in the past, while some devote their entire life to a better future. While some fear death the most, some are dead while still alive. Based on this compelling premise, David Frankel’s fantasy film ‘Collateral Beauty’ unfolds like the petals of an onion — an onion because the story is layered and it attempts to make you cry.

Although this onion somewhat lacks in heat, it gives you enough material to chew on and digest. The story revolves around a bereaved father and his misfit motley of friends who try to help him cope with his loss, but their attempts do not prove to be enough to break his shell. An indictment of the pervasive depression in modern existence and a homage to cinema and its evocative powers, the film rightly features a star-studded cast to isolate the viewers from the screen. But we are getting ahead of ourselves. The ending shatters the illusions as it gives meaning to the story. If you have found it difficult to decode the narrative of the film, let us assist you in your journey of apprehension. SPOILERS AHEAD.

The story begins with the introduction of Howard (Will Smith), an executive at the advertising firm Yardsham Inlet. As his friend Whit (Edward Norton) states, the charismatic and driven Howard is the “rebel command of brand.” Howard speaks of three abstractions – love, death, and time. As he puts it: “We long for love, we wish we had more time, and we fear death.” Three years later, Howard is completely changed after the death of his daughter.

Life is lost in his eyes, and he mostly keeps to himself in a darkened room and roams around the city at night on his cycle. His three caring colleagues, Claire (Kate Winslet), Whit, and Simon (Michael Pena), put a tail on Howard in an attempt to save the company. When they find out that Howard is writing angry letters to the three abstractions, they decide to manifest these three abstractions before Howard’s eyes.

During an audition, Whit runs into Amy (Keira Knightley) and follows her to a theatre. He meets Amy’s co-actors Raffi (Jacob Latimore) and Brigitte (Helen Mirren). Followed by Whit’s ingenious idea — Claire’s skepticism notwithstanding — Howard’s friends go to propose that the theatre actors act as the three abstractions. In the meta-theatre, the emotional Amy becomes Love, a vital Brigitte takes the form of Death, while an impatient Raffi becomes Time.

They convincingly play their parts to make Howard believe that only he is seeing them. In the meantime, Howard comes out of his exile and hesitantly attends a grief support group hosted by Madeline (Naomie Harris). It is revealed that not only Howard but his friends too have blank spaces in their lives. In the finality of events, Howard returns to the moment of trauma, and it heals him. Guided by the abstractions, Howard’s friends find their respective closures, while the actors disappear into thin air, having expended their energy in the creation of the fantasy.

Collateral Beauty Ending: Are The Actors Real or Are They Howard’s Illusion?

The actors are neither wholly real nor are they illusions of Howard. In medieval times, there used to be these plays called morality plays – little interludes which would revolve around a central protagonist who would represent the larger humanity. The protagonist would revisit his memories, guided by supporting characters who would be personifications of abstractions. It seems that the presence of Amy, Brigitte, and Raffi is purely allegorical.

Amy is emotional and empathetic, and therefore, she is Love. Raffi is rash and impatient and, therefore, he is Time. Brigitte is old, wise, and certain, and therefore, she is Death. Not only do these abstractions preoccupy Howard’s mind but they also say something about the voids in the lives of Howard’s friends. This modern-day morality play maintains a rigid structure, following the theatrical form.

Whit loves his daughter for the world, but his daughter does not reciprocate his love since she has learned from his mother about her father’s casual relationships with other women. Whit suffers from a lack of love, and therefore he pursues Amy/Love. Claire, who has devoted her entire life to her work, longs for a child, but her youth is fleeting. Therefore, she engages with Raffi/Time.

Finally, Simon, who is dying from multiple myeloma, confides in Brigitte/Death. It feels that the characters of Amy, Brigitte, and Raffi are only conjured to imbue the lives of the real characters with meaning. In the end, Whit makes amends with his daughter, Claire looks for a sperm donor, while Simon divulges the news of his fatality to his wife. As the characters find their closure, the allegorical actors take their leave.

Howard goes to a grief support group presided over by the compassionate Madeline. Both of them have suffered from the loss of a child, and the mutual grief helps Madeline earn Howard’s trust. But at the climactic moment, when Howard comes to the house of Madeline, Madeline makes him remember his daughter’s name, and Howard comes to realize that he and Madeline are suffering from the same loss – the death of their 6 years old daughter Olivia.

It seems that Madeline is indeed Howard’s better half. After the loss of their daughter, they become strangers, only to be reunited in the end. At the beginning of the film, we see Howard withdrawn from the world and locked in his own mind. From his letters, we find that Howard has said his farewell to love, has seemingly won over death, and has nothing but contempt for time. Howard’s meetings with the actors are also strategically placed. After feeling welcomed by Madeline, he opens up to Love. After Howard receives the warning letter from his attorney, he bumps into Time. And yet again, when Howard has nothing but distaste for life, he meets Death.

While the abstractions orchestrate the situation to an extent, Madeline is the one who finally brings Howard’s memory back. Howard chose to forget his daughter’s name to cope with his loss, but as he revisits the moment of trauma in Madeline’s house, we feel that his wounds are healed. In a flashback scene, Death visits Madeline when her daughter is in the hospital, and she talks to her about the “collateral beauty,” the phrase which lends the film its title. The collateral beauty is perhaps the beauteous gift of creation itself.

What Does the Domino Sequence Mean?

The film, more than anything, talks about the therapeutic power of cinema. Cinema and theatre are quite different as art forms, although this film manages to conceal a theatre within it. Walter Benjamin compared the difference between these two art forms through the dualism of magic and surgery. Theatre, driven by its ornamental props and “deus ex machina,” feels like the spectacle of magic, and on the stage, the theatre actors become the characters they portray.

On the other hand, cinema creates a more approachable reality by putting together separate video segments, as it stretches or constricts the boundaries of space and time. In effect, the film actor is denied the opportunity of association. The domino sequence is therefore crucial in its symbolic evocation of the fantasy created in this film. In any film, the exposition scene tumbles down a domino, and the rest of the story progresses naturally to a destined end.  Moreover, the present film casts a slew of acclaimed actors, and we, as viewers, cannot look past their cult of personality.

The film never completely invests in its fantasy tale since we see Will Smith as Will Smith before we see him as Howard. The same can be said about all the other actors. And even then, we cannot overlook how the make-belief world of the film creates a profound effect in its therapeutic exploration of grief and absence. The film creates such impact because it encourages the audience to dissociate, objectify, and contemplate, moving the vision inward.