Everything We Know About Green Lantern Corps

A cinematic limbo for lucrative properties (read: superhero movies) is the slump nobody frankly wants. There is ambition, resources, and most importantly capital and years of planning that precede and then (intend to) succeed such a film outing usually. Unfortunately so, DC seems to find itself stuck there every few years. The Batman movies were in a limbo for almost 10 years before Nolan came along and revived them; Superman, far more, while the rest of them have barely waited for a solo movie, despite being pop culture icons since as far long as the 80s. The most remarkable of these slumps is what will serve as the propulsion point for this article.

Notably so, the only properties Marvel has actually seen a slump with are the Fantastic Four, and those de facto were not being handled by the MCU. When such a film fails, the superhero property has to inadvertently go under for a long hibernation before the bad aftertaste of the last film is forgotten, and the studio can then prep for a successful reboot to get the cash rolling in again, this time in inflation-adjusted figures. Goes to show how much the studios (looking at you specifically, WB and Sony) care about actually telling good stories and characters with heart.

The greatest recent slump in the same arena that I am aware of resulted from the pitfall of 2011’s awful studio camp ‘Green Lantern’, that almost anybody involved with in any capacity has disowned, some more vocal than others. The audience reviews have been kinder in retrospect as the movie aged, but we are far out from that shore now. DC now has its own extended cinematic universe, giving them the perfect opportunity to now introduce the character in a new light suitable for this universe, and a new actor to the helm, seeing as even though Reynolds was perfect for the part, he definitely won’t be around to play the lantern again. Alas, even DC’s current reboot stands in a state of stasis and the earlier 2020 scheduled ‘Green Lantern Corps’ seems nowhere close to happening. Here we examine the prospects of it, and everything that we know about the superhero’s re-entry into the DC universe of films. Read on.

Green Lantern Corps Plot: What Is It About?

In an attempt to distance themselves as much as possible from the 2011 film, DC announced a ‘Green Lantern Corps’ film instead of a singular, direct reboot, back when things were looking good and promising for the newly set up cinematic universe. The slate of releases has significantly changed to say the least since ‘Justice League’ derailed, and the brunt of it was borne by virtually all films scheduled post it. While uncertainties still prevail, there are a number of details about the possible plot that we have from when the film was in active development.

As the name suggests, rather than serving as an origin story for Hal Jordan, the film was intended to focus on the entire team of intergalactic defenders named the Green Lantern Corps, of which Hal Jordan is a part, in charge of protecting the sector in which Earth falls. This directly implies that there would have been remarkably less Earth, and remarkably more space, including visuals of the planet of the guardians, Oa, responsible for the commissioning of the guardians. According to DC mythology, the entire universe, even the farthest reaches of it are comprised of 3600 sectors, Earth being Sector 2814. Each sector has two guardians assigned to its cause, protecting the sector against intergalactic threats, instating the lanterns to around 3 Billion years old.

Coming to the film itself, as I said earlier, the makers intended to keep ‘Green Lantern Corps’ entirely set in space, only remotely visiting Earth for the threat that would befall the two guardians of Sector 2814, which brings me to my next point. Majority of the DC animated movies and the 2011 live-action movie had Hal Jordan as the Green Lantern, who is also acceptably the more popular one. John Stewart on the other hand as a member of the ‘Justice League Adventures’ animated series has only that as a remarkable appearance in film media, even though is greatly loved by fans of the print media across the world.

‘Green Lantern Corps’ could have been the monumental live action film that brought the two of them together on screen. In fact, a previous draft of the script penned by long time Green Lantern writer Geoff Johns involved an older, battle hardened Hal Jordan, while focusing on a younger John Stewart’s origins. The film would then pan out as a buddy comedy in space, ending with the two possibly squaring off against the Sinestro Corps, with one of the makers even terming it as similar to “Lethal Weapon’, but in space”. The other notable members of the corps would also be poised to make an appearance in this film that can be a mini cinematic universe in itself owing to the large wealth of history and characters between them.

The primary reason that gets me really hyped up for a ‘Green Lantern Corps’ film as opposed to a singular origins film once again, is the infinite possibilities it opens up. The Corps comprises of Green Lanterns from various corners of the universe, some of them taking the form of planets in themselves and some of them assuming the form of microscopic bacteria. I cannot currently imagine how a film with all of them and two human lanterns would pan out, but in able hands and imaginative, fertile minds, this should be no less than a blast. Then of course, there is the vast infinitum of popular stories to draw from, the quantum being magnanimously larger than what singular stories with Hal Jordan would allow, including ‘Blackest Night’, ‘Lights Out’, ‘Godhead’, ‘Sinestro Corps War’ and many, many more. 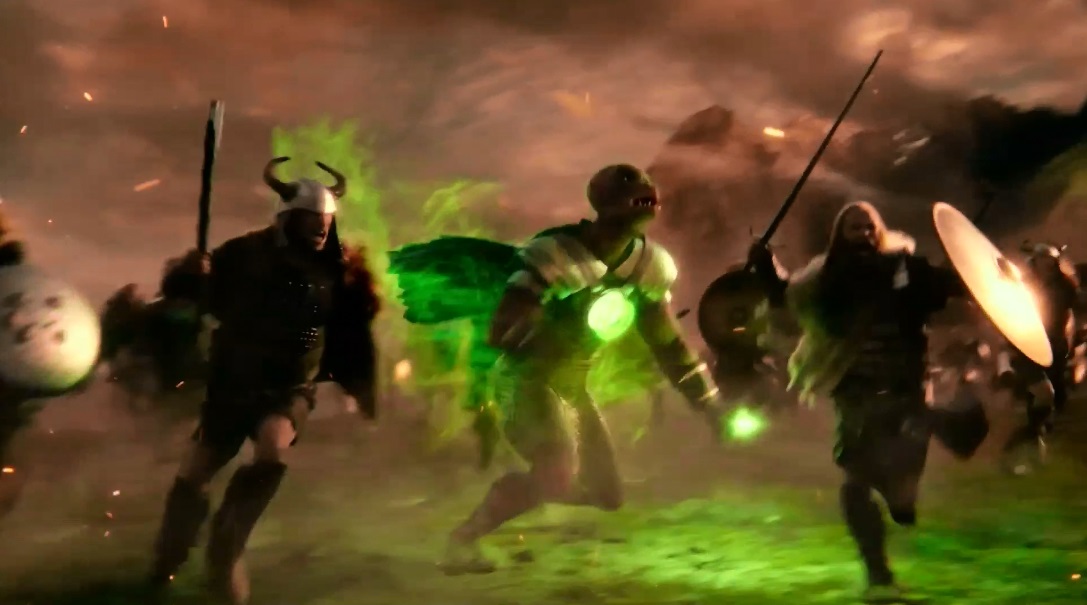 Among the most interesting parts of the film was definitely the historic battle between the united clans of Men, Atlanteans and Amazonians. The battle, Steppenwolf’s purpose of invasion, and his eventual defeat at the hands of the alliance are narrated by Diana in voiceover to Bruce, mounted over an impressive sequence of epic-in-scale shots. However, in what was an extreme moment of child-like joy for the fans, Diana mentions that the alliance also had help from a legion of old gods and “allies from other worlds”, upon which a green lantern flies across the sky beating down hordes of parademons with his ring. Now, while this one moment was, for the lack of a better word, quite awesome, what it also does indicate is that the Green Lantern Corps have existed in the DCEU for millenia, reaffirming the eponymously titled film earlier in the pipeline. The sequence terminates with Steppenwolf overpowering and killing what seems like Yalan Gur, while the ring travels onward to find its successor.

Green Lantern Corps Cast: Who Is In It?

No final names have been pinned to the cast as of now, given that the character was also remarkably absent from the league in the 2017 film, but a few names have been eyed by WB to be in consideration. Remarkable among them would be Tom Cruise in the role of Hal Jordan that WB is eagerly and strongly rallying towards, even though to no end from Cruise’s side, and several fan petitions they took seriously in seeking out Armie Hammer for the same role, although Hammer has dismissed any claims that the production house contacted him. While these are only breadcrumbs, this would sure seem like progress when we look on toward the John Stewart side of things where there have been no developments. Tyrese Gibson has been rallying for years altogether for Stewart’s role in a film, and although he was awarded one in ‘Injustice 2’, the videogame, that may not have been all he hoped for.

Green Lantern Corps Crew: Who Is Behind It?

No current director, or one that would stay post announcement has been a key problem with DC movies in development, and this one is no exception. Geoff Johns has been confirmed as penning the script though, along with David S. Goyer, another prolific DC writer, but reportedly, a previous draft of their script was scrapped in favour of a new one that they are currently working on, further pushing back the production on the film. Although there are no confirmations on this, WB had reportedly been in talks with ‘Rise of the Planet of the Apes’ director Rupert Wyatt, who would have been the second from the ‘Apes’ series to be roped into the DCEU. Any confirmation on this front is also, sadly, still awaited.

Green Lantern Corps Release Date: When Will It Premiere?

The original release date set for the film was July 24, 2020, but that certainly won’t be happening seeing as though there is virtually no progress on the film as of now. Depending on the success of upcoming DC movies and how far a second ‘Justice League’ film would seem, I would place my bet on at least 3-4 years from now.