Honor Society Ending, Explained: Do Honor and Michael End Up Together? 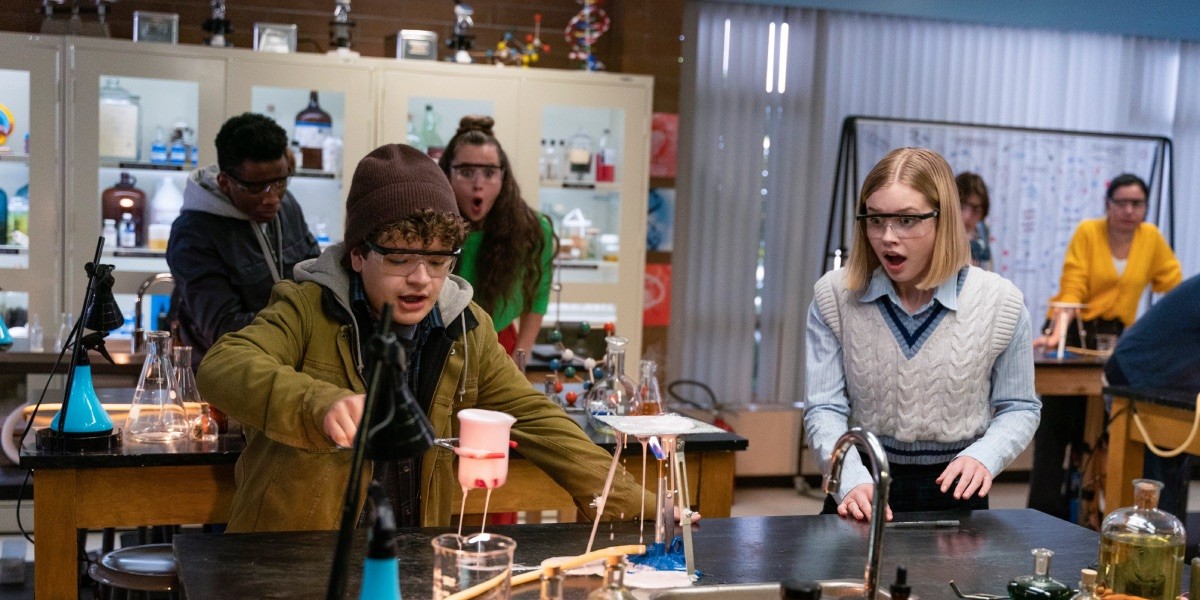 ‘Honor Society’ is a comedy film directed by Oran Zegman and written by David A. Goodman (‘The Orville‘). It revolves around Honor, a talented and academically gifted student who desperately needs her guidance counselor’s recommendation letter to get into her dream college. However, she must first eliminate her rivals for the same recommendation.

Honor’s quest is refreshing, given the saturation of romantic conflicts in the teen drama genre. Moreover, the electric portrayal of high school life will keep viewers hooked. As a result, the audience might lose sight of the twist and revelations that turn Honor’s game on its head. Naturally, viewers must be looking for answers to Honor’s quest. In that case, allow us to share everything you need to know about the ending of ‘Honor Society.’ SPOILERS AHEAD!

‘Honor Society’ revolves around Honor (Angourie Rice of ‘Spider-Man: No Way Home‘), an academically gifted high senior from a small town. She sees her college application as a chance to leave the dull town and never return, in turn, building herself a successful life. However, despite being one of the top students in her class and one of the most intelligent people in the school, Honor relies on her guidance counselor, Mr. Calvin (Christopher Mintz-Plasse of ‘Kick Ass’), for a recommendation letter.

Calvin has friends at Harvard, which is Honor’s dream school. However, he can only recommend one student. Honor considers her chances of getting the recommendation bright as Calvin likes her and makes romantic advances. Nonetheless, Honor’s hopes are dashed after she learns that she is one of the four students in consideration for the recommendation to Harvard. The students are Kennedy, the socially isolated genius; Travis, the captain of the Lacrosse team; and Michael, a nerdy student whose grades match Honor.

Honor decides to distract her competitors and plans to eliminate them from the race systematically. She involves Kennedy and Travis in the theater club’s upcoming play. As a result, Kennedy’s academics and Travis’ sports activities begin to suffer. Nonetheless, Honor’s actions inadvertently help her peers in their personal growth. However, Honor struggles to eliminate Michael (Gaten Matarazzo of ‘Stranger Things‘), and he proves to be her fierce competitor. Honor makes Michael her study partner in hopes of using the situation to create romantic tension between them. Hence, Honor hopes to dissuade Michael from going to Harvard and achieving her goal.

Honor Society Ending: Do Honor and Michael End Up Together?

In the film, Honor pegs Michael as a nerdy student without any social life. He is a loner with no friends and often spends his time playing video games. Hence, Honor plans to distract Michael from his goals by pretending to be interested in him. She becomes his lab partner and then study partner, giving them more time together. As time passes, Honor becomes comfortable around Michael, and the two become fast friends. The romantic tension between them is evident, but Honor refuses to be distracted from her goals.

In time, Honor and Michael both fall in love with each other. Honor learns that Michael comes from a poor family and needs the scholarship to attend college. As a result, she feels that Michael needs the recommendation letter more than she does. Hence, Honor decides to set her goals aside and pulls out of the race, allowing Michael to get the coveted letter. Instead, Honor and Michael pursue a romantic relationship together.

Towards the end, Michael begins acting distant and ignores Honor shortly after she decides against getting the letter. Honor tracks down Michael at his home and learns that he was lying to her all along. Michael reveals that he is from a wealthy family and was merely using Honor’s plan to get the letter. Thus, Michael played the same game Honor was playing with him. However, Michael did not deter from his goal and didn’t actually have feelings for Honor.

In the end, Honor is heartbroken and returns home. She tells her mother the truth and states that she has broken up with Michael. Honor is an intelligent girl who never lets her emotions get the better of her. She has many qualities, but her compassion differentiates her from others. Ultimately, Michael uses Honor’s compassion against her, leaving Honor heartbroken. Nonetheless, Honor refuses to let the bad experience ruin her plans for the future. She enjoys the last days of her high school life with her new friends, such as Travis, Kennedy, and Gavin, ending the film on an optimistic note.

Does Honor Get into Harvard?

During the film’s final act, Honor speaks with Mr. Calvin about getting a recommendation letter for her application to Harvard. However, Calvin expresses an interest in sleeping with Honor in exchange for giving her the letter. Honor is distraught to learn Calvin’s motivations but handles the situation tactfully. She refuses to sleep with Calvin to gain the letter, which will lead her one step closer to her dream. Eventually, Michael succeeds in his plan, and it seems like he will be getting the recommendation letter instead of Honor.

Nonetheless, Honor has one last move to stop Michael from getting the coveted letter. While Michael discusses his prospects with Calvin, the counselor is about to offer him the recommendation letter. However, Honor appears at the last moment and plays her cards. She reveals that she recorded the conversation with Calvin in which he made sexual advances toward her. As a result, Calvin cannot refuse Honor’s desire and must do as she says. Consequently, Michael loses the recommendation letter, and it appears as if Honor has flipped the game in her favor.

However, Honor asks Calvin to give the recommendation letter to Kennedy instead of Michael. In the end, Honor’s compassion becomes her defining quality as she decides to help her friend achieve her dream instead of using the situation to her advantage. Thus, honor differentiates herself from Michael, who is selfish in his quest to pursue his goals. In the end, it isn’t revealed if Honor goes to Harvard, but given her credentials and academic caliber, it is unlikely that the prestigious university will turn her down. Nonetheless, the film’s ending leaves viewers and Honor cautiously optimistic about her future.