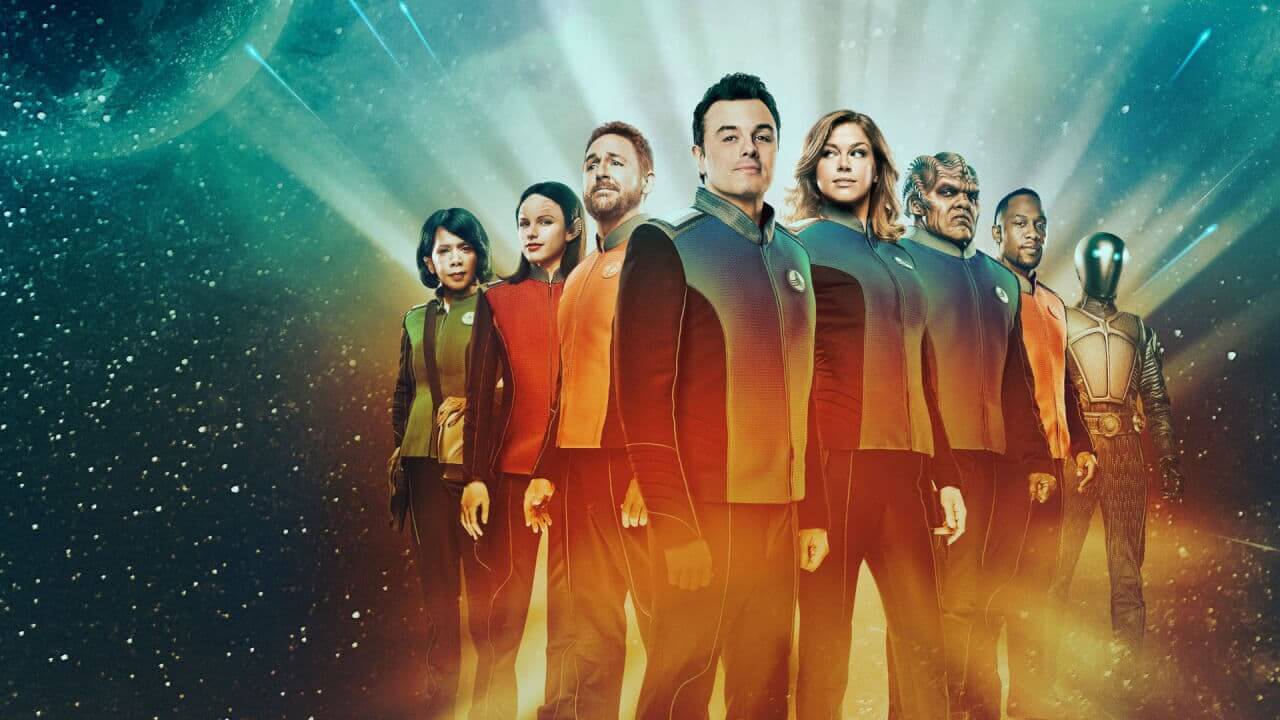 ‘The Orville‘, a sci-fi drama series, takes a unique approach to this conventional, serious genre by adopting witty, comic elements. Seth MacFarlane is the creator and he also stars as the protagonist of the show. The series debuted on September 10, 2017. MacFarlane enacts the role of Ed Mercer, who is deployed as an official in the line of exploratory interstellar vessels under Planetary Union. However, when his life takes a downturn after a failed career and divorce, he is assigned to act as the first command for the mid-level ship U.S.S. Orville (ECV-197). But he is shocked when he discovers that his ex, Kelly Grayson, is his first officer. ‘The Orville’ chronicles the activities of the duo and their team as they tackle various diplomatic and exploratory missions in space.

Set in the futuristic 25th century, the show explores the several cosmic challenges faced by the crew, while narrating the events in a very unique, comic style. The series received mostly positive reviews from critics and audience. However, there are several other amazing shows too that explore such unique sci-fi concepts and ideas. Here’s the list of best series similar to ‘The Orville’ that are our recommendations. You can watch several of these shows like ‘The Orville’ on Netflix, Hulu or Amazon Prime. 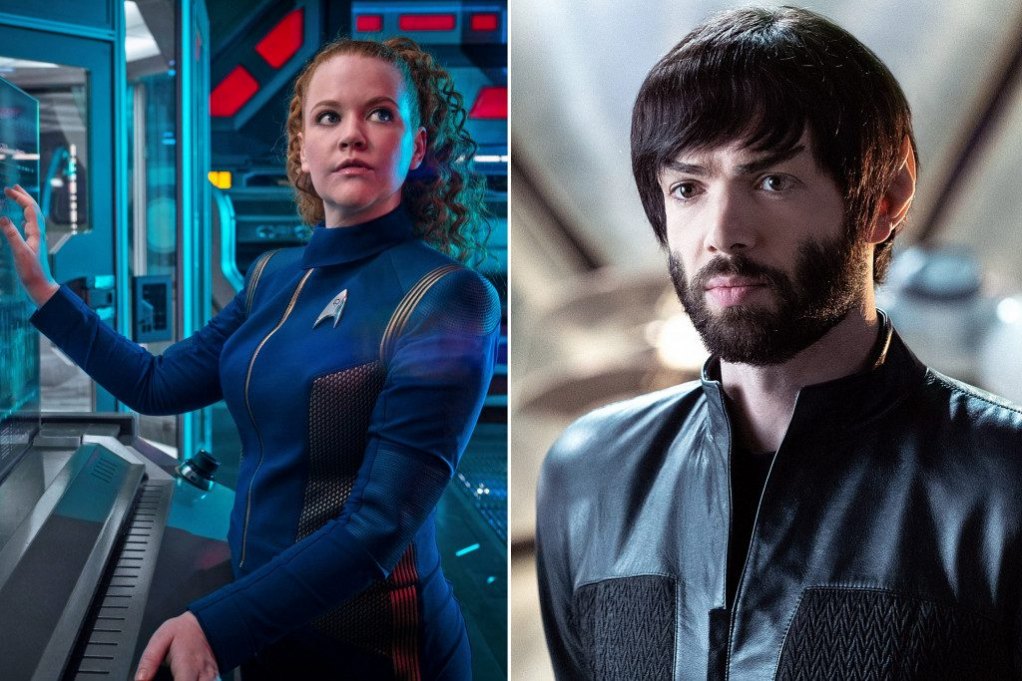 ‘Star Trek: Discovery‘, created by Bryan Fuller and Alex Kurtzman, is set around 10 years before the five-year mission undertaken by Captain Kirk in the original 1960s ‘Star Trek’. It takes you to a time frame 100 years prior to the events of ‘Star Trek: Enterprise’. Based on the same theme as depicted in the rest of the ‘Star Trek’ franchise shows, it chronicles the activities of the team on the USS Discovery as they explore new worlds and civilizations in space. 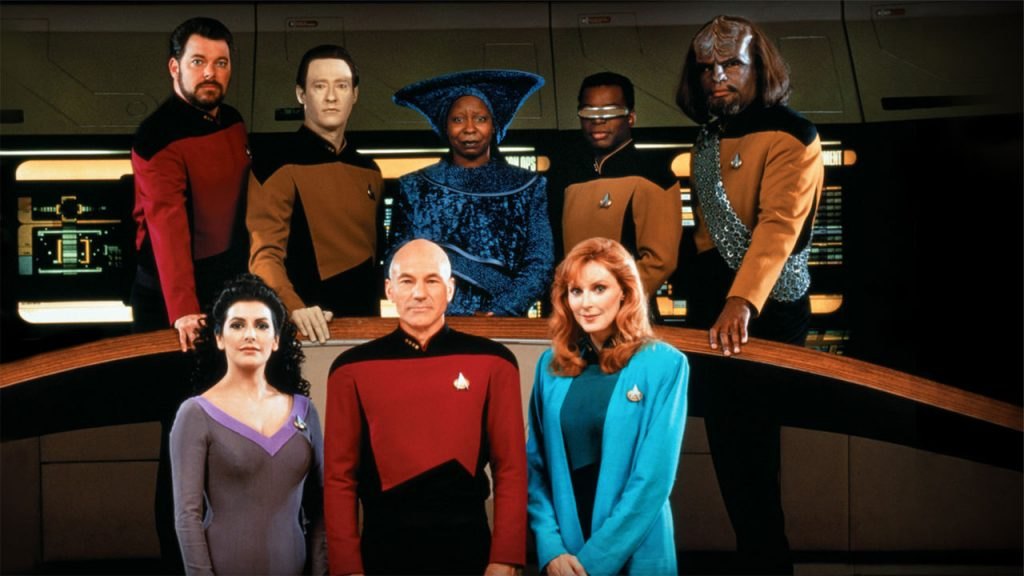 ‘Star Trek: The Next Generation’ is the third instalment in the ‘Star Trek’ anthology and is created by Gene Roddenberry. It ran from September 28, 1987, to May 23, 1994, covering 178 episodes and seven seasons. This second sequel of ‘Star Trek: The Original Series’ transports you to the 24th century, where you witness the adventures aboard the USS Enterprise-D as its team explores the Milky Way. Each episode of the show introduces the primary purpose of the ship and it goes like this: “Space: the final frontier. These are the voyages of the starship Enterprise. Its continuing mission: to explore strange new worlds, to seek out new life and new civilizations, to boldly go where no one has gone before.” 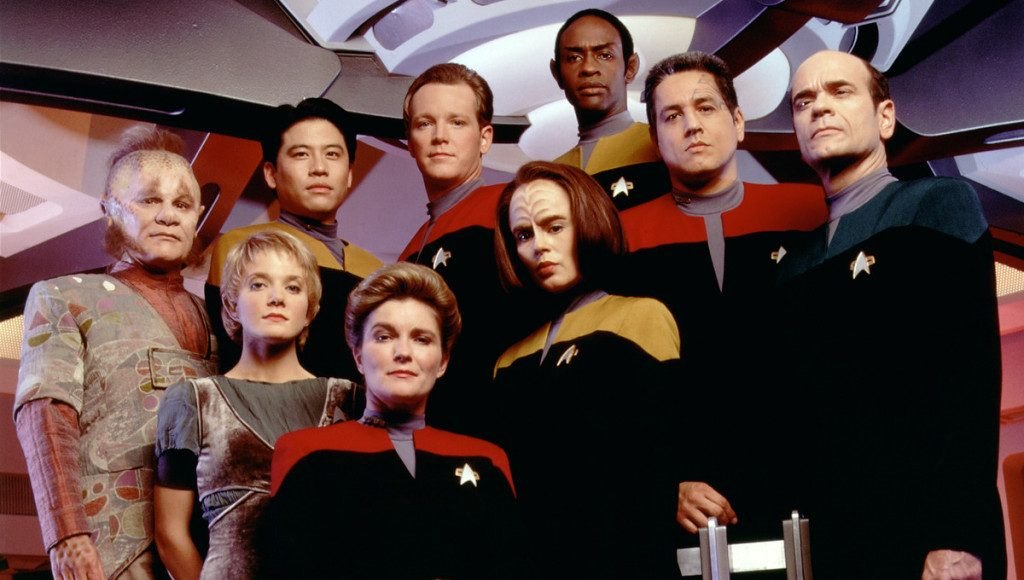 ‘Star Trek: Voyager’, created by Rick Berman, Michael Piller, and Jeri Taylor, debuted on January 16, 1995, and concluded with its final episode on May 23, 2001. Spanning 172 episodes spread out over seven seasons, it is the fifth instalment of the ‘Star Trek’ franchise and the fourth sequel of ‘Star Trek: The Original Series’. The story takes viewers to the 24th century where the audience gets to witness the adventures of the USS Voyager. The vessel is stranded in the Milky Way’s Delta Quadrant and the team attempts to find its way back home. Along the way, the crew has to battle several interstellar entities, with each posing as an obstacle to their long return journey. 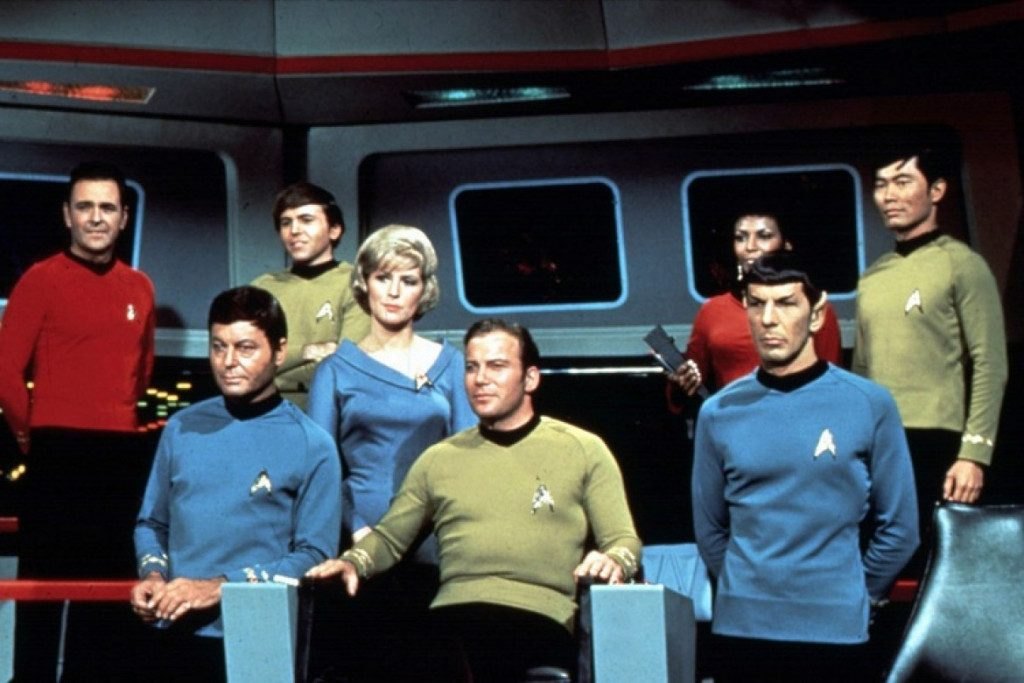 ‘Star Trek’ is the original and parent series that gave birth to the titular Star Trek Franchise. In this science fiction series created by Gene Roddenberry, we get to see the activities of the crew aboard the starship USS Enterprise (NCC-1701), as they embark on various adventures in the Milky Way galaxy. Set in the 2260s, the show features Captain James T. Kirk as the leader, Spock as the First Officer and Science Officer, and Leonard McCoy as the Chief Medical Officer. A voice-over intro before each episode states the primary mission of the ship. It says “Space: the final frontier. These are the voyages of the starship Enterprise. Its five-year mission: to explore strange new worlds, to seek out new life and new civilizations, to boldly go where no man has gone before.” The show was later renamed ‘Star Trek: The Original Series’ in order to differentiate it from the other titles in the anthology. 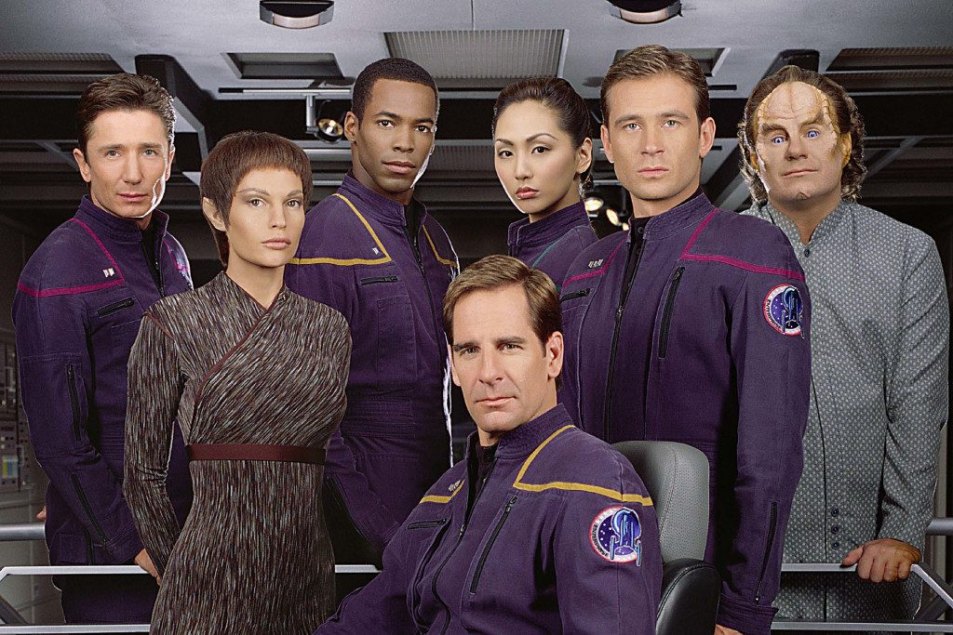 ‘Star Trek: Enterprise’ revolves around the crew of the interstellar vessel, named the Enterprise NX-01. It transports you to the mid-22nd century and chronicles the historical events that lead to the creation of the United Federation of Planets. The storyline is set around 100 years prior to the adventures headed by James T. Kirk on his legendary starship. The show features Rick Berman and Brannon Braga as the creators and it ran from September 26, 2001 to May 13, 2005 on UPN. Over its course, it covers 98 episodes and four seasons. This sixth instalment of the ‘Star Trek’ franchise is a prequel to ‘Star Trek: The Original Series’. 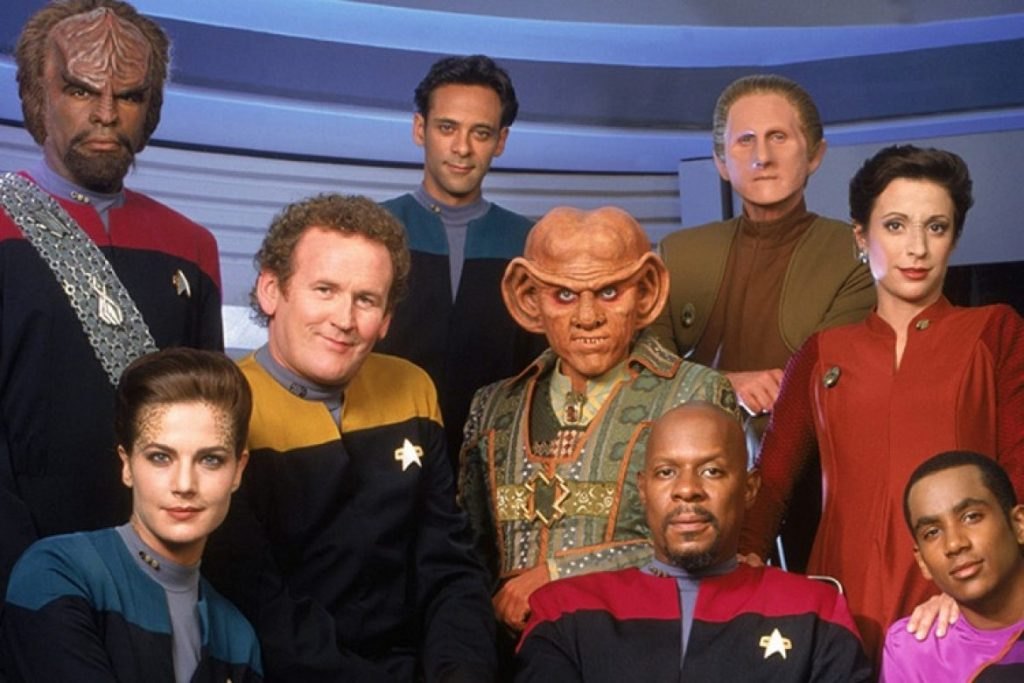 ‘Star Trek: Deep Space’ was created as a spin-off to `Star Trek: The Next Generation’. It chronicles the adventures of the crew inside a space station orbiting the planet Bajor. Here, instead of Captain Kirk, we see Commander Benjamin Sisko as the leader of his team. The plot takes a slightly different approach than that of its counterparts, focusing on the Deep Space Nine which is located within close vicinity of a wormhole. This makes interspace travel much faster. As a result, the crew has to constantly face threats from diverse alien species who want to take control of their vessel. 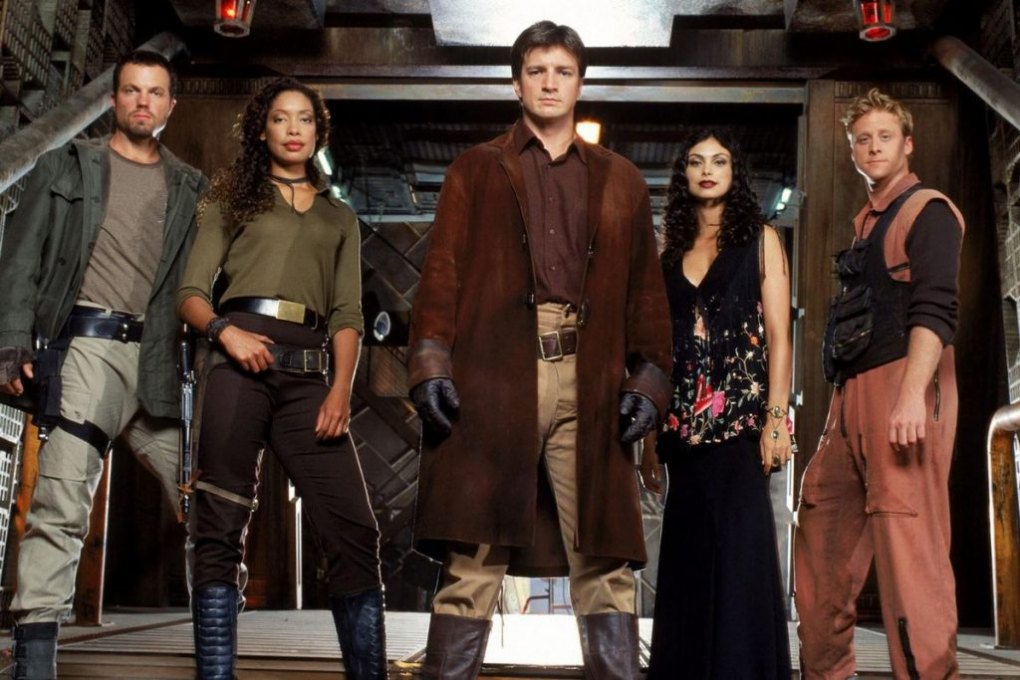 Yet another futuristic sci-fi drama, ‘Firefly’ is set in a time frame 500 years from the present. In the midst of a devastating and massive universal civil war, the team inhabiting a small spaceship is forced to take up jobs to sustain their day-to-day livelihood. Although the members want to better their lives, matters are complicated when they have to face several challenges, such as battling against sinister forces and alien species dominating outer space. 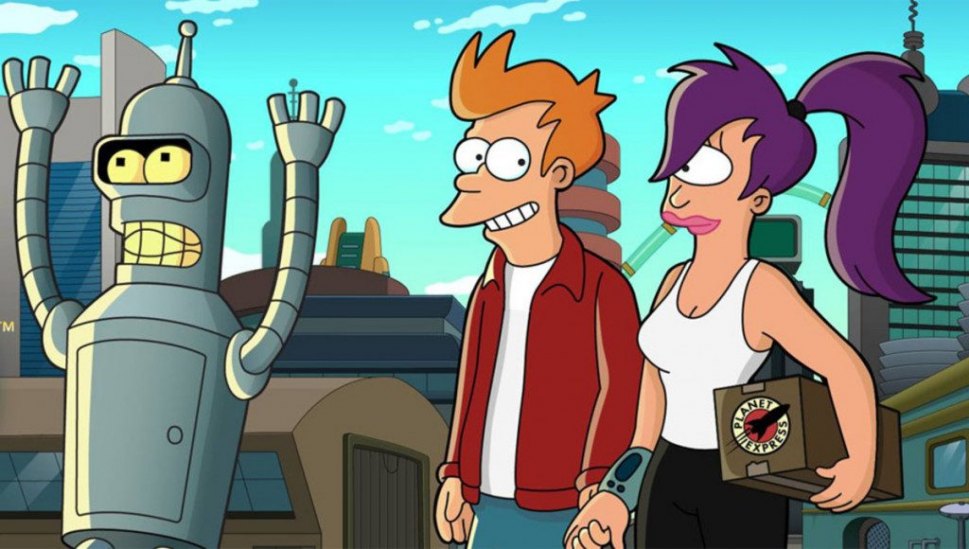 ‘Futurama’, an animated sci-fi show, is created by Matt Groening. Set in the 31st century in New York, the series revolves around Philip J. Fry, who was cryonically preserved for 100 decades and is revived in this time period. Searching for employment to support himself, he lands a job with an interplanetary delivery company. Through his eyes, we get to see a technologically advanced world filled with 21st-century issues that have taken a drastic turn. Fraught with the devastation after global warming, substance abuse, and pollution, the earth may now be controlled by super-advanced human inventions, but it is not the place it used to be anymore. 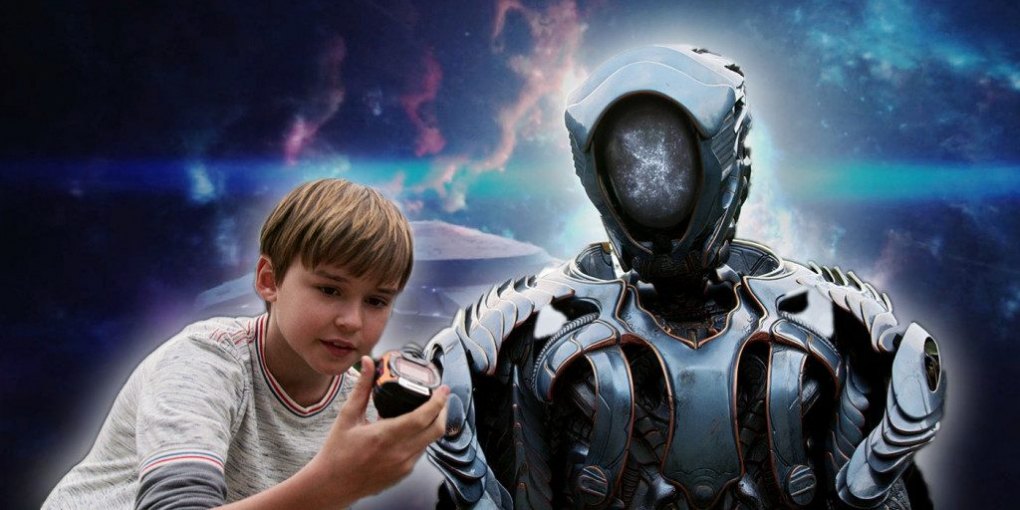 ‘Lost in Space‘, a science-fiction series, is a reboot of the 1965 series of the same name, which is again based on the acclaimed novel named, ‘The Swiss Family Robinson’. When humanity is on the verge of destruction after facing an impact event, the Robinson family is selected to be part of the 24th mission aboard the Resolute, a spaceship carrying families to colonize the interplanetary Alpha Centauri star system. However, during the journey, the Resolute is attacked by an alien robot and the members have to evacuate the mothership. The Robinsons evacuate via the Jupiter spacecraft, along with several other survivors, which crash lands on a nearby habitable planet. The family has to now find out means to survive in these strange, unfamiliar conditions and discover their way back to the Resolute. 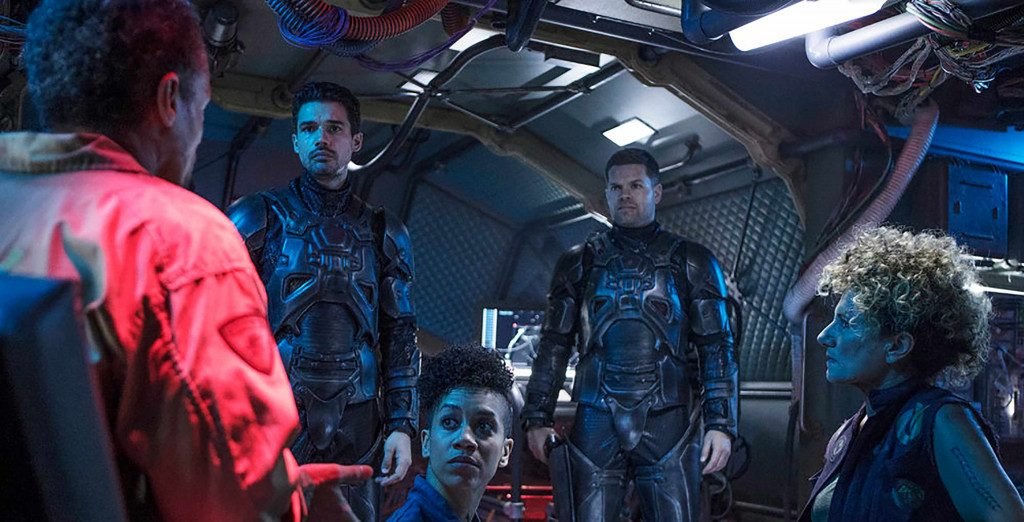 ‘The Expanse’ is set several hundred years in the future when humans, by means of technological advancements, have found the means to colonize the solar system. Among the habitable planets, Mars has now transformed to become an independent military power. Differences and tensions between the populations inhabiting Earth and Mars have pitched both the parties against each other, creating a Cold War-like atmosphere, which might convert to a real war anytime soon. In the midst of these devastating conditions, detective Josephus Miller and James Holden, the captain of a certain spaceship, come together to solve the mysterious case of a missing young woman. As they journey across the solar system on this mission, they might uncover the biggest conspiracy in interplanetary history.

Created by Mark Fergus and Hawk Ostby, ‘The Expanse’ is based on the novel series of the same name written by James S. A. Corey. Upon its release, the show was critically acclaimed for its cinematography, characterization, and political story arc. Nominated for several awards in the sci-fi genre, ‘The Expanse’ should definitely feature on your watchlist.