How did Helen Die? Who Killed Helen in Ozark? 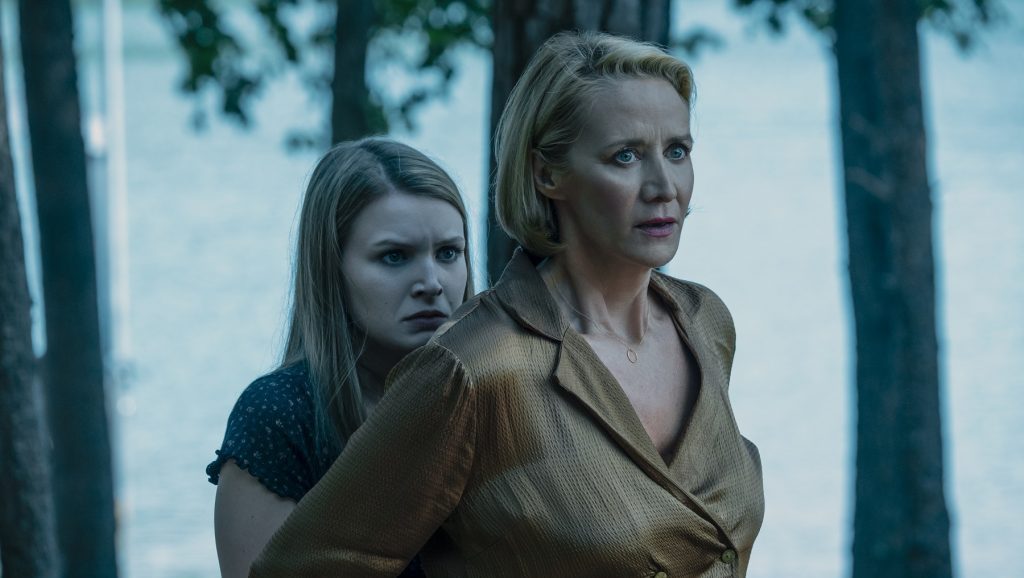 The Navarro Cartel casts an unseen but ominous net over everything that goes down in ‘Ozark.’ The shadowy syndicate is introduced in tiny increments, with each new cartel member that Wendy and Marty encounter signifying the central couple’s rise in the criminal world. Thus, when Omar Navarro’s personal lawyer, the formidable Helen Pierce, moves to the Ozarks, she brings with her the ruthless might of the Mexican drug cartel.

Season 3 is where most of Helen’s story unfolds, and the lawyer alternates between being a valuable ally and potentially fatal rival to the Byrdes. In season 4, she is conspicuously missing, and her death seems to signify a new phase in Marty and Wendy’s connection to the cartel. If you’re a little hazy on the details of Helen’s death, we’ve got your back. Get ready for one of the most mind-blowing (literally!) ends of a character in ‘Ozark.’ SPOILERS AHEAD.

How Did Helen Pierce Die?

Helen Pierce moves to the Ozarks for the summer in order to keep a closer eye on Wendy and Marty’s considerable undertaking of setting up a casino to launder cartel money. The tall, imposing woman dominates most discussions, and, as the spokeswoman for Navarro himself, she is the face of the cartel in Missouri. Wendy admits to being intimidated by Helen but also looks up to her as an inspiration, and the two share a brief but productive friendship.

Unfortunately, Wendy’s brother Ben’s sudden appearance overlaps with Helen’s time in the Ozarks, with disastrous consequences. When the clueless and emotionally unstable Ben finds out about his sister’s connection to a drug cartel, he begins to come undone and becomes a liability to the cartel. Ben essentially seals his fate by revealing to Helen’s teenage daughter, Erin, the truth about her mother’s connection to the cartel. Helen orders him to be killed even as Wendy and Marty plead with her not to go through with it.

Ben’s death becomes one of many points of contention between the Byrdes and Helen until finally, there is palpable tension in the air whenever they meet. The lawyer attempts to try and convince her boss to give her control of the Byrdes’ substantial operations and even forges an FBI statement to make Marty look like an informant. Realizing they need to prove their worth to Navarro, Wendy and Marty successfully help end the cartel war that is significantly hindering the Navarro Cartel.

Eventually, Helen and the Byrdes are invited to Mexico by their boss. Upon arriving, they are greeted by Navarro. Without warning, Helen is then shot through the head, with bits of viscera splattered onto the speechless Wendy and Marty. The cartel boss then hugs the Byrdes, signifying that they have now been promoted to high-ranking members of the cartel.

Helen’s death is a cold, calculated reminder to the Byrdes by the cartel boss that their lives are firmly controlled by him. By having Helen killed, Navarro essentially tells the Byrdes that they now work directly for him and that they do not need a middleman. Most notably, with the Byrdes and Helen trying to one-up each other, the boss makes a decision based on who is more valuable to him. The fact that he chooses Wendy and Marty Byrde over his personal lawyer says a lot about just how deeply our Missouri family is involved with the cartel.

There are multiple aspects that make Helen’s murder chilling, not the least of which is that she is shot by her trusty companion Nelson. So far, Nelson is the unquestioning hitman largely responsible for carrying out Helen’s orders and the pair of them strike fear into the hearts of most people that know of them. However, we get a stark reminder that Nelson’s loyalties lie with the cartel, and any member, no matter how close or senior, is expendable. Thus, Helen is shot by her trusty companion, the cartel hitman Nelson, on the orders of her boss Omar Navarro.