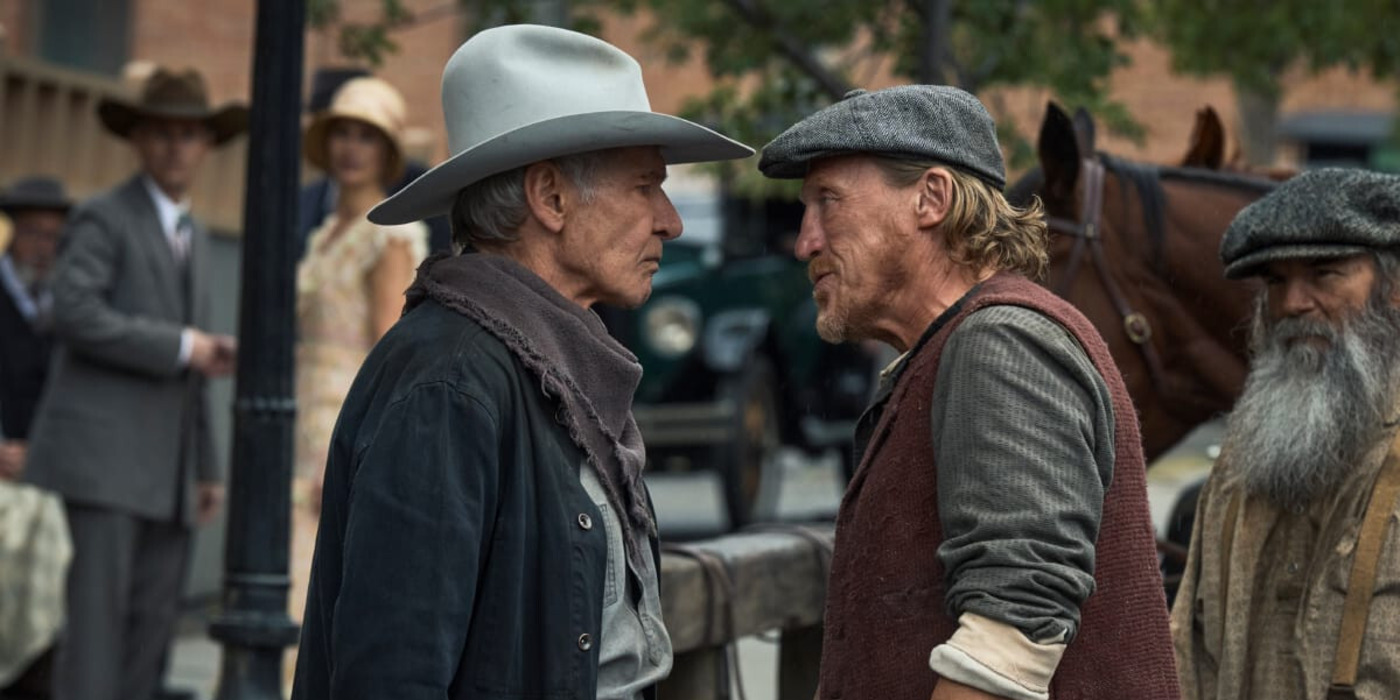 Paramount+’s ‘1923’ is a Western drama series created by Taylor Sheridan. It follows Jacob and Cara Dutton, the heads of the Dutton family, who oversee the Yellowstone Dutton Ranch while dealing with several socio-economic challenges. The series is a part of the ‘Yellowstone’ universe that includes the parent series ‘Yellowstone‘ and the prequel series ‘1883.’ It continues some of the narrative threads established in its predecessors, making viewers curious about 5the connections between ‘1923’ and ‘1883.’ If you are wondering how the two shows are related to each other, here is everything you need to know! SPOILERS AHEAD!

‘1883,’ created by Taylor Sheridan, takes place in the titular year and follows the Duttons, led by patriarch James Dutton. He meets Shea Brennan and Thomas, cowboys who transport immigrants from Texas to Oregon across the Great Plains. James and his family comprising wife, Margaret; children, Elsa and John; sister, Claire; and niece, Mary Abel. However, the latter two die before the journey starts. Ultimately, the Duttons survive the trip with Shea and Thomas and settle down in Montana. However, Elsa dies shortly after arriving in Montana, leading to the foundation of the Yellowstone Dutton Ranch.

‘1923’ takes place in the 1920s amidst the Western Expansion, Prohibition, and the Great Depression. Although the series is also created by Sheridan and serves as a sequel to ‘1883,’ none of the actors from the predecessors reprise their roles. The series focuses on Jacob Dutton (Harrison Ford) and Cara Dutton (Helen Mirren) as they lead the Duttons during the titular era and operate the Yellowstone Dutton Ranch. Thus, the two shows are connected via the Yellowstone Ranch, which is also the setting for the parent series ‘Yellowstone.’

In ‘1923,’ James and Margaret Dutton are absent as their characters die before the show’s events kick off. James dies in 1893, a decade after founding the ranch, while Margaret passes away a few months after her husband’s death. As a result, Jacob Dutton, the brother of James Dutton, takes over the ranch and the family’s responsibilities. Hence, ‘1923’  continues the story that starts with James by focusing on his brother.

While James and Margaret are dead, their children appear in the follow-up series. ‘1923’ features James Dutton’s elder son, John Dutton I, in his adult years. He is married to Emma Dutton and has a son named Jack Dutton. While the character is present in ‘1883,’ he is a child, and actor Audie Rick portrays the role. However, in the sequel to the series, actor James Badge Dale takes over the role. Therefore, the presence of John Dutton in the story connects the successor show to its predecessor as it continues to tell the Dutton family’s story.

While James Dutton’s younger son, Spencer Dutton, does not appear in ‘1883,’ he is one of the main characters in the follow-up series. The character is introduced in flashback sequences of ‘Yellowstone’ season 4. Therefore, Spencer not only serves as a connecting link between ‘1883’ and ‘1923,’ but he also connects the prequels to the parent series.

Lastly, actress Isabelle May who portrays Elsa Dutton in ‘1883,’ reprises her role in a voice capacity. In the series premiere episode of ‘1923,’ Elsa Dutton serves as the narrator and introduces us to Jacob and Cara Dutton. Thus, Elsa, one of the protagonists of ‘1883’ serving as the narrator of the successor show, helps bridge the forty-year gap between the two shows.

Ultimately, ‘1923’ is a sequel to ‘1883 and continues telling the Dutton family’s origin story. It expands the history and legacy of the Yellowstone Dutton Ranch, which is the main focus of all three shows in the ‘Yellowstone’ universe. Moreover, it details the Dutton family tree and introduces viewers to new members of the family while also featuring adult versions of previously known Duttons. Hence, ‘1923’ continues to shed light on the past of the Dutton family and underlines what defines them and their sentimental connection to their land.

Read More: Is Yellowstone Prequel 1923 Based on a True Story?