Paramount+’s ‘1923’ continues to explore the origin story of the Dutton family, who own and operate the Yellowstone Dutton Ranch. In the series set during the tribulations of Western Expansion, Prohibition, and the Great Depression, the Duttons face unexpected threats and must fight to protect their land. The third episode sees the Dutton foes attacking the family, leading to several injuries. One of the family members who is injured during the gunfight is John Dutton Sr (James Badge Dale). If you are wondering whether John succumbs to his injuries and whether actor James Badge Dale is leaving the show, here is everything you need to know about the character’s fate in ‘1923.’ SPOILERS AHEAD!

John Dutton I, also known as John Dutton Sr, is the son of James Dutton, the protagonist of ‘1883.’ In ‘1923,’ he appears as an adult and the nephew of Jacob Dutton (Harrison Ford), the brother of James Dutton. Jacob leads the Yellowstone Dutton Ranch, and John serves as his right-hand man. John is married to Emma Dutton (Marley Shelton), and they have a son named Jack Dutton (Darren Mann). In the series premiere episode, John accompanies the Yellowstone cowboys on a trip to feed their cattle on the mountain. The second episode sees John fighting a group of shepherds (led by Banner Creighton) trespassing on the Dutton land. In the third episode, titled ‘The War Has Come Home,’ John and the cowboys return home from the trip. 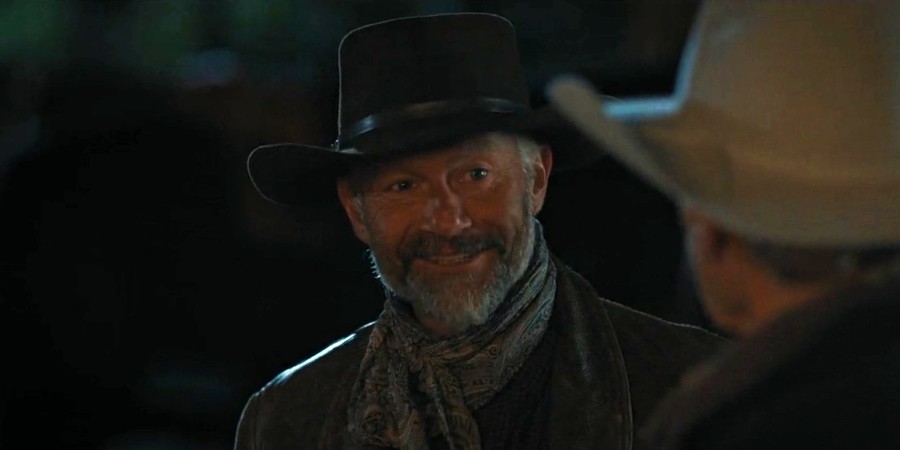 Later, the Duttons travel to the town for some work. However, when the family returns from the town, they are attacked by Creighton and his men in an open field. John and Jacob are on horseback while the Dutton women are in a wagon. The gunfire causes the wagon to run loose, and John and Jacob help Emman and Cara Dutton escape the wagon. A gunfight unfolds, and John, Jacob, and Jack fight back but face overwhelming odds. Moreover, Creighton shows up with an automatic gun and opens fire at the Duttons. Jacob and John create an opening for Emma and Cara to leave the crossfire area. However, Jacob and John are both shot in the process. While Jacob is injured, John dies on the spot.

John Dutton is the only character from the prequel series ‘1883’ to appear in the follow-up series. Actor James Badge Dale (‘World War Z‘) takes on the role from Audie Rick and Jack Michael Doke, who play the child and the teenage version of John Dutton Sr. Given that the character serves as the connecting link between the two shows, viewers might have expected to see more of John’s story in ‘1923.’ However, the character is unceremoniously killed off in the show’s third episode.

Unlike the actors playing other members of the Dutton family, James Badge Dale is credited as a recurring guest star for the show’s first season. Therefore, it is likely that his character’s death in an early episode was planned. The series premiere episode puts Spencer (Brandon Sklenar) and Jack Dutton in mortal danger. However, they both survive near-death experiences. The third episode jeopardizes the life of nearly all the Dutton family members, making it unlikely that the family would emerge from the carnage without casualties.

John Dutton dying, the conflict between Creighton and the Duttons raises the stakes for the Dutton family while ensuring the story of ‘1923’ does not contradict the ‘Yellowstone’ universe’s overall narrative. Unfortunately, with his character’s death, the time has come for James badge Dale to hang up his cowboy hat. Dale is unlikely to appear in future episodes, but his character’s demise paves the way for John’s brother, Spencer Dutton, to return home and lead the ranch.

In an interview, Dale refused to comment on John’s relationship with Spencer, implying that he did not shoot scenes with actor Brandon Sklenar. Thus, it is evident that Dale’s character is supposed to die before Spencer returns home. Dale is next slated to appear in the action-thriller ‘Rebel Ridge’ directed by Jeremy Saulnier, and a sports film ‘Balestra’ directed by Nicole Dorsey. On the other hand, ‘1923’ continues to release new episodes, with the first season set to comprise eight episodes.

Read More: Who is the Indian Girl in 1923? Is Teonna Related to Thomas Rainwater?