Is Lifetime’s Nightmare Neighborhood Moms a True Story? Where is it Filmed? Who is in the Cast? 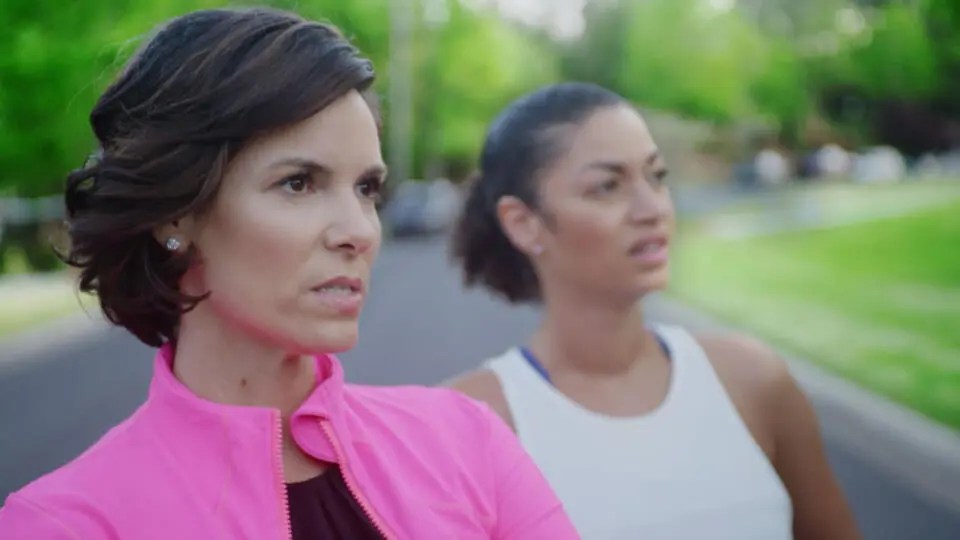 ‘Nightmare Neighborhood Moms’ is a thriller movie that follows Charlotte, a divorced mother, and her daughter, Jordan, as they move into a new area. While settling in the locality, the mother-daughter duo meets their new neighbor Bonnie. While talking to other people in the area, they find out about the recent murder of Kira, a resident of the neighborhood. Jordan decides to create a neighborhood watch and gets suspicious of Bonnie’s activity. Meanwhile, Bonnie, who isn’t as sweet as she portrays herself to be, sets her sights on Charlotte.

Alternatively titled ‘Crazy Neighborhood Moms,’ the suspense film is helmed by Linden Ashby and Susan Walters Ashby. The majority of the film takes place in a seemingly idyllic neighborhood, the realistic aspect of which makes the audience feel more connected and enthralled with the story. The shed where Bonnie traps Charlotte is sinister enough to put everyone on the edge of their seats. The nuances of the movie are hard to shake, and if you cannot wait to know more about its filming locations and origin, you’re at the right place. Here’s everything you need to know!

Part of Lifetime’s ‘There Goes The Neighborhood’ series, ‘Nightmare Neighborhood Moms’ was filmed entirely in Georgia. The production particularly took place in the cities of Atlanta and Peachtree City within the state. The shooting most likely began towards the end of April 2021 and finished in the middle of May of the same year. Let’s take a closer look at the specific details of the filming sites.

Atlanta, the capital of Georgia, has always been a popular spot for movie production, earning it the title of Hollywood of the South. ‘Nightmare Neighborhood Moms’ also took advantage of the city’s sprawling landscape that provides filmmakers with varied options to choose from for their backdrops. Therefore, it is not surprising why the city serves as a filming site for many Lifetime productions, including this crime thriller.

Over the years, the filmmaking industry within Atlanta has boosted Georgia’s economy by a significant percentage. As a national leader in video production and home to several production houses, the city is a favorable shooting location. Several of the fan-favorite movies and shows, like ‘Spider-Man: No Way Home‘ and ‘Moonshot‘ were also filmed, in part, at The Gate City.

The production team of ‘Crazy Neighborhood Moms’ also moved south of Atlanta, particularly to Fayette County to tape a portion of the film. Peachtree City, the largest city in the County, served as one of the filming sites of the Lifetime film. Named after the Peachtree Lake, the city has three lakes and is known for its usage of golf carts as a major mode of transportation. Projects like ‘The Walking Dead‘ ‘Joyful Noise,’ and ‘Drop Dead Diva’ also use this beautiful city as a filming location.

Filming of a few scenes featuring Malena Cunningham Anderson, Gina Simms, and Paul Van Scott seemingly took place in the city of Fayetteville, which is also the county seat of Fayette County.

A portion of the shooting of ‘Nightmare Neighborhood Moms’ was likely also carried out in the city of Newnan. The county seat of Coweta County, the city has also served as a production spot for projects like ‘The Conjuring: The Devil Made Me Do It‘ and ‘Just What the Doctor Ordered.’

A post shared by Eye Candy by Aliz🏁 (@alizeyecandy)

Gina Giacinto-Simms takes up the sinister role of Bonnie in ‘Nightmare Neighborhood Moms.’ With a varied portfolio under her belt, Gina can also be seen in ‘Killer Profile’ and ‘The Encounter.’ Starring alongside her is April Hale as Charlotte. April’s other credits include ‘A League of Their Own‘ and ‘Family Time.’ Summer Madison appears as Samantha, while Johnathan Gorman appears as Bonnie’s husband, Christian.

The supporting cast includes Coley Campany as Angela, Sarah Jirgal as Sabrina, Brey Noelle as Kira, John Zimmermann as Matt, Paul Van Scott as Peter, Jennifer Gasca as Lacey, Eduardo Burgos as a Car detailer, Charles Christopher as Technician, and Brooke Montalvo as Renee, among others.

No, ‘Nightmare Neighborhood Moms’ is not based on a true story. The realistic and haunting storyline of the film can be credited to the amazing Melissa Cassera, whose other works include ‘Obsession: Her Final Vengeance‘ and ‘Daddy’s Perfect Little Girl.’ The narrative touches on some of the most common themes in cinema — a wronged spouse taking her vengeance by killing her competition. While drafting the storyline, Melissa likely took these themes into account and weaved a unique narrative.

A scorned spouse committing murder due to jealousy is not unknown in the real world. Consider the case of Betty Broderick, who married Daniel T. Broderick III in 1969. However, in 1982, Daniel hired 21-year-old Linda Kolkena as his legal assistant, with whom Betty suspected Daniel was cheating on her. The couple divorced in 1989 after a 4-year long process, and Daniel married Linda in the same year. Distraught from her failed marriage and separation from her kids, Betty killed her ex-husband and his new wife while they were sleeping. The story was even adapted into a show titled ‘Dirty John: The Betty Broderick Story.’

Despite the realistic themes and settings of the movie, the storyline of ‘Nightmare Neighborhood Moms’ is not rooted in reality. The prevalent themes of infidelity and the path of revenge a jilted lover could embark upon to get their ways, combined with excellent performances by the actors and the authentic settings, shaped the Lifetime production into a thriller worth watching.