Is Titanic Based on a True Story?

James Cameron’s cinematic masterpiece, ‘Titanic,’ is a romantic tragedy that launched actors Leonardo DiCaprio and Kate Winslet to meteoric stardom and still tugs at millions of heartstrings. The 1997 film follows star-crossed lovers Jack, a penniless young artist, and Rose, a wealthy engaged woman. The two hail from opposite ends of society but are united by their passionate, rebellious spirits. Jack and Rose’s relationship sets sail amongst all odds, only to be wrecked by the sinking of the very ship aboard which it had blossomed.

The James Cameron directorial has won its share of big bucks, rave reviews, prestigious accolades, and dedicated fans for portraying the everlasting nature of love even in the face of disaster. It is natural for fans to wonder whether a historical event formed the movie’s premise. Let’s find out if how much of ‘Titanic’ is real and how much of it is imagined!

Is Titanic a True Story?

‘Titanic’ is partially based on a true story. Cameron based the film on the real-life British ship RMS Titanic that collided with an iceberg and sunk to the bottom of the North Atlantic Ocean during its maiden voyage in 1912. More than a thousand passengers died, making the incident the deadliest peacetime sinking of a cruise ship to date. The catastrophic sinking of the eponymous ship has been an inspiration for many artists, from novelist and poet Thomas Hardy to painter Ken Marschall. But perhaps, the most memorable and publicly recognizable work of art based around this historical disaster is ‘Titanic.’

Cameron and his team worked hard to accurately represent the doomed ship visually. The director dived 12 times to see the underwater wreckage. “We unearthed every known photograph, poured over architectural drawings, and built our ship rivet by rivet, making sure everything was in its rightful place, as was known back in 1996,” said the director. The grand staircase and suites shown in the film are likewise based on blueprints of the actual Titanic. Plans of Titanic’s sister ship, RMS Olympic, were also used for set design to fill in any gaps in documents detailing the titular ship.

Most viewers know that Jack Dawson and Rose DeWitt Bukater are artistic creations — fictional characters required by the plot to demonstrate the overwhelming power of true love. However, several characters and plotlines in the ‘Titanic’ have real-life inspirations and counterparts. Socialite and traveler Margaret “Molly” Brown (Kathy Bates) did exist, and she did help tremendously in the evacuation and rescue processes. Most notably, she is said to have attempted to save the lower class passengers and even tried, albeit unsuccessfully, to convince the lifeboats to go back and save more.

Brown also reportedly raised money for the underprivileged survivors and helped in organizing burials for the deceased. Thus, she is often referred to as “The Unsinkable Molly Brown.” Captain Edward John Smith (Bernard Hill) in ‘Titanic’ reinforces in viewers the gravity and nobility of a captain’s oath, and he did exist in real life. Paul Burns, vice president and curator of the Titanic-themed museums in Tennessee and Missouri, noted that Captain Smith’s quick decision to seal the watertight doors of the ship “prevented the ship from sinking like it normally would.”

However, while many praise Captain Smith’s efforts to put the lives of his passengers before his own, others wonder whether it was his error in judgment that caused the sinking in the first place. Captain Smith had received ice warnings — however, more often than not, these reports simply referred to the positions of ice in water and were not indicative of immediate danger, especially in clear weather. 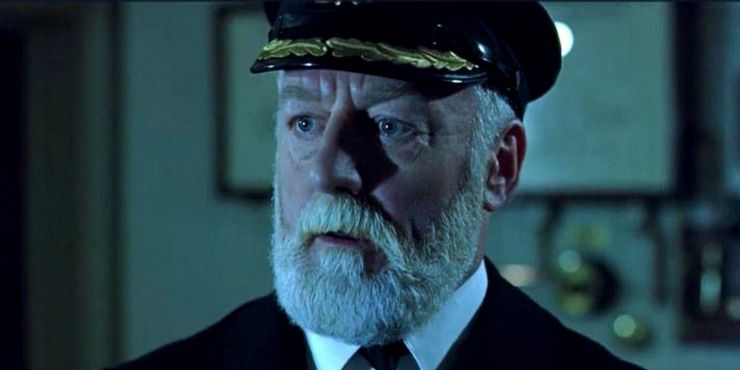 “Smith made mistakes, it is true, but to the end he did not shirk his responsibilities or try to wheedle out of them and paid the ultimate price as a result,” stated Gary Cooper, who has written an extensive book about him titled ‘Titanic Captain: The Life of Edward John Smith.’ Captain Smith went down with the ship, as the movie shows. However, it is unknown whether he was at the wheel or outside helping with the lifeboats at the time of his death.

Thomas Andrew Junior was the main designer of the Titanic and the Olympic, and had been aboard the ship during its maiden voyage. Upon the ship’s collision with the iceberg, Andrew quickly realized that the ship would sink and urged passengers to flee. The movie shows him as a kind-hearted man. He quietly laments the mistakes he made in his building of the ship towards the end. This may be true, as the real Andrew had been on board to make notes on how to improve the ship’s design. 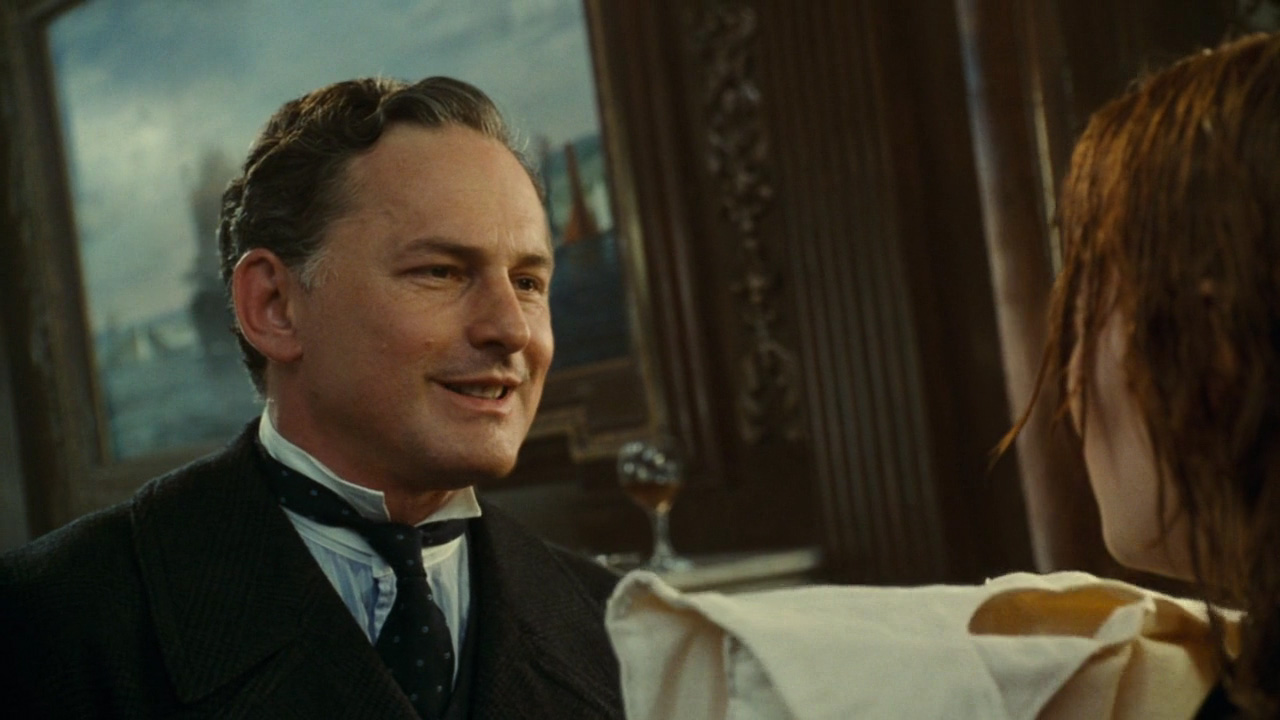 Joseph Bruce Ismay was the chairman of the White Star Line, the shipping company that built the Titanic. The movie portrays Ismay as a greedy businessman, concerned only with profits and positive press coverage. He even goes so far as to ignore the ‘women and children only’ rule to save himself. It seems that this interpretation of Ismay is not too far from reality. Eyewitnesses claimed that they saw Ismay break the rules and even hog a private cabin aboard the rescue ship.

In the movie, Rose’s controlling and arrogant fiance Cal Hockley (Billy Zane) acts in a similar fashion — he pretends to be a random child’s father in order to secure a spot for himself on the lifeboats. However, Hockley is fully fictional. 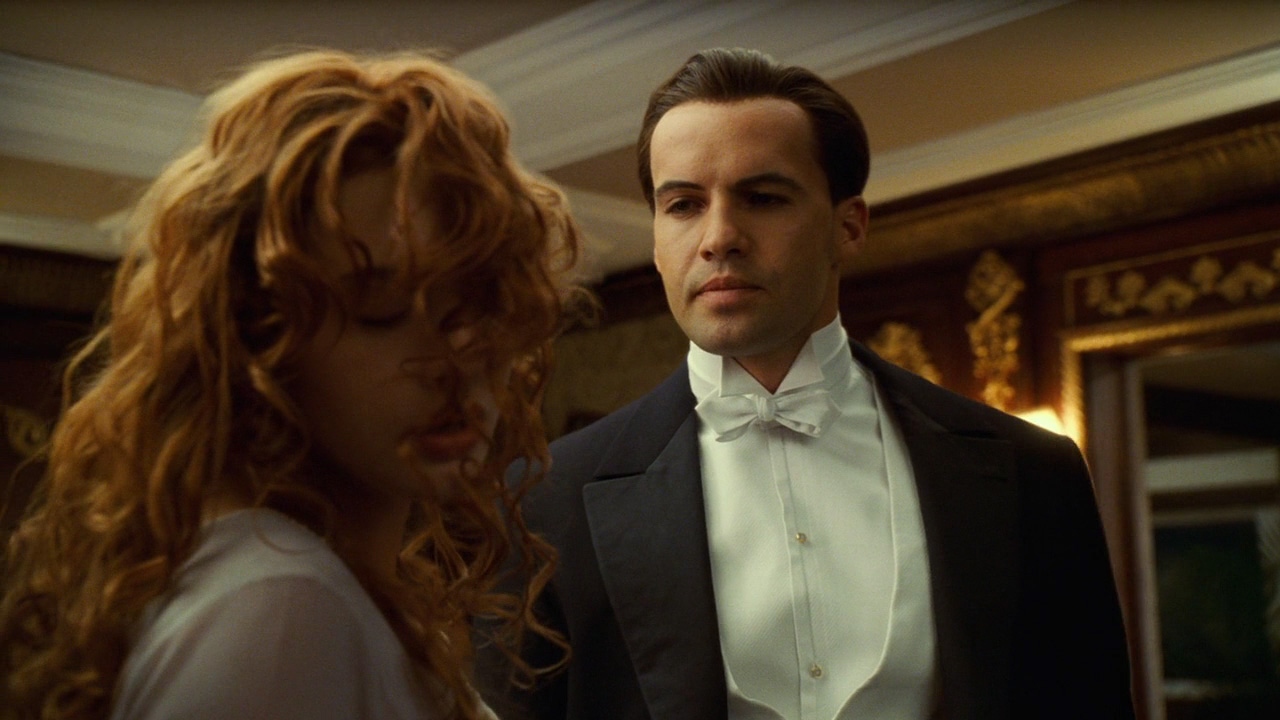 One of the most gut-wrenching scenes in the movie is when the orchestra continues to play with all its might even as the ship sinks and the sea rises all around them. The scene is based on historical truth as well. William Hartley, violinist and bandleader, and his band comprising John Woodward, John Frederick Clarke, Theodore Brailey, Percy Cornelius Taylor, Georges Krins, John Law Hume, and Roger Bricoux, performed for over two hours as chaos unfurled around them. They died as the ship went under.

Although ‘Titanic’ portrays the band playing ‘Nearer, My God, to Thee,’ historians still debate which songs actually soothed the ears of the dying. However, the pitfalls of the artistic liberty that Cameron wielded come to light with the character of First Officer William McMaster Murdoch, who had been aboard the Titanic. In the movie, Murdoch shoots two passengers in panic — for disobeying his orders — before shooting himself out of guilt. Murdoch’s descendants felt that the movie maligned his integrity and noble attempts to save as many lives as possible.

“I wasn’t thinking about being a historian, and I think I wasn’t as sensitive about the fact that his family, his survivors might feel offended by that and they were,” said Cameron, who had publicly apologized. Moreover, Scott Neeson, the then-Vice President of 20th Century Fox, had personally gone to say sorry to Murdoch’s nephew. It’s interesting to note that even fictional Rose — particularly Gloria Stuart’s elder Rose — is based on the real-life Beatrice Wood, a bold and vivacious artist. Although bearing no connection to the historical ship and its events, Wood is celebrated for her avant-garde works and spirited nature.

She even had an ill-fated romance with an Indian scientist, unable to be with him due to their differing backgrounds. Cameron was taken by her enigmatic personality and channeled the same into Rose. Wood passed away on March 12, 1998. Movies like ‘Schindler’s List,’ ‘Chernobyl 1986,’ ‘Flight,’ and ‘1917’ all chronicle historical disasters and the strong strain of human bonding that flows amongst, and despite, them. It seems that fiction is one of the best ways to understand, visualize, and learn from the horrors of the past.

“I’m learning what the limitations of history really are. We can never really truly understand perfectly what happened, for any historical event. It’s always going to be an approximation,” confessed Cameron. Thus, ‘Titanic’ uses a powerful but imaginary love story to narrativize the cold facts of an actual disaster. It takes creative liberties in order to convincingly demonstrate the devastation of a mighty ship’s downfall and the loss of lives that could have had bright futures. Perhaps we do need fiction to acknowledge the untold stories of those who were quietly extinguished in historical tragedies big and small.

Read More: Where Was Titanic Filmed?