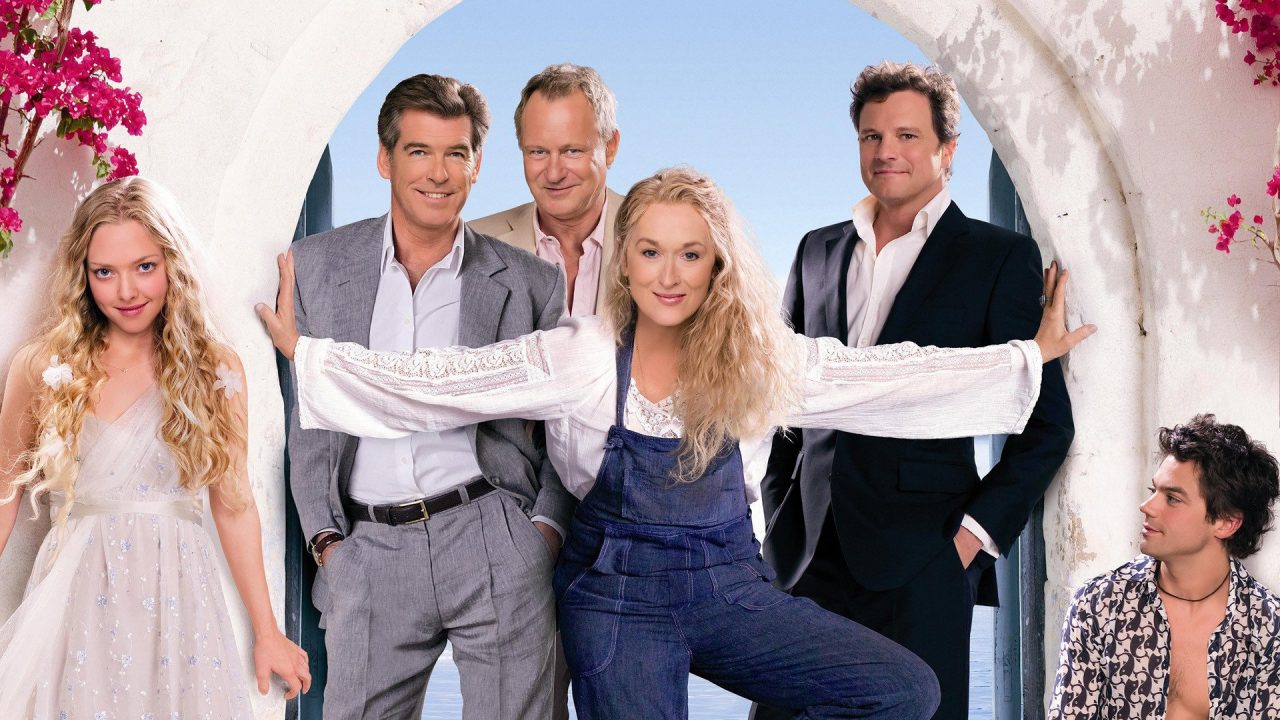 Catherine Johnson’s 2008 musical romantic comedy ‘Mamma Mia!’ is not a movie that is beloved by critics. In fact, many critics derided the film heavily at the time of its release, and the movie even netted actor Pierce Brosnan a Golden Raspberry Award for Worst Supporting Actor for his role in the movie, but that did not matter much in the long-term as it won the hearts of audiences all over the world.

‘Mamma Mia!’ is appreciated for its fun, scenic vistas and campy story line, as well as its fantastic chart topping music by Swedish pop group ABBA which includes iconic smash hits such as “I Have a Dream”, “SOS”, “Waterloo”, “Mamma Mia” and about a dozen more thumping soundtracks.

‘Mamma Mia!’ features an all star cast boasting the likes of Meryl Streep, who plays the role of Donna Sheridan-Carmichael, hotel owner and single mother; Amanda Seyfriend as Sophie Sheridan, Donna’s 20 year old daughter; Pierce Brosnan as Sam Carmichael, an architect and one of Sophie’s three possible fathers; Colin Firth as Harry Bright, banker and possibly Sophie’s father, and Stellan Skarsgård as Bill Anderson, a sailor and another possible candidate for Sophie’s father.

The story line of ‘Mamma Mia!’ follows Sophie, a newly engaged young woman who hatches a plan to invite three men from her mother’s past to the celebration proceedings in the hopes of finally uncovering the identity of her biological father. If you were wondering where Mamma Mia!’ was filmed, read on to find out everything we know.

The entirety of the plot of ‘Mamma Mia!’ takes place in the fictional Greek island of Kalokairi, where Donna lives along with her daughter Sophie and manages her own hotel called Villa Donna. The movie is renowned for beautiful vistas and landscapes, with idyllic beaches, sunshine and elegant Greek architecture. The only way to truly capture the beauty of the Greek isles was to actually film on location, which is exactly what director Phyllida Lloyd chose to do.

‘Mamma Mia!’ is primarily shot on a few Greek islands, with the majority of the outdoor filming being done on the island of Skopelos, while the indoor scenes were primarily filmed at Pinewood Studios in the United Kingdom. While these two locations account for the bulk of the filming, some of the beach scenes were also filmed in California, USA.

The majority of the outdoor filming for ‘Mamma Mia!’ was done on the small, unspoilt island paradise that is Skopelos, a small Greek island in the western Aegean Seas. The blue waters, white sand beaches and charming whitewashed houses of Skopelos act as the perfect backdrop for a fun, light-hearted romantic comedy movie such as ‘Mamma Mia!’.

The filmmakers used Kastani Beach for on location filming for most of the shoot, even constructing a beach bar and jetty on the set along the beach specifically for the movie. Another notable location on Skopelos island is the Agios Ioannis Chapel, the location where the wedding procession scene at the end of the movie was filmed. The song “The Winner Takes It All” was filmed on a coastal path just below the church itself.

Check out his picture of the Agios Ioannis chapel in the region of Kastri in Skopelos:

Another Greek island which served as a filming location for ‘Mamma Mia!’ is the small seaside hamlet of Damouchari on the east coast of Greece. This is the location where the climax scene for the “Dancing Queen” soundtrack was filmed.

All the scenes in ‘Mamma Mia!’ inside Donna’s struggling Villa Donna hotel were actually filmed on set at the 007 stage at Pinewood Studios, Buckinghamshire, England. This is the same filming location shared by other popular films such as Daniel Craig’s ‘Skyfall’, Johnny Depp’s ‘Charlie and the Chocolate Factory’, Bruce Willis’ ‘The Fifth Element’, Tom Cruise’s ‘Mission: Impossible’ and many more.

Check out this picture of the famous Stage 007 in Pinewood Studios, England, UK:

Besides the Greek isles and the studio in the UK, ‘Mamma Mia!’ also filmed certain scenes in other locations including the Laguna Beach in California and the Djemaa el Fna main square in Marrakech, Morocco.