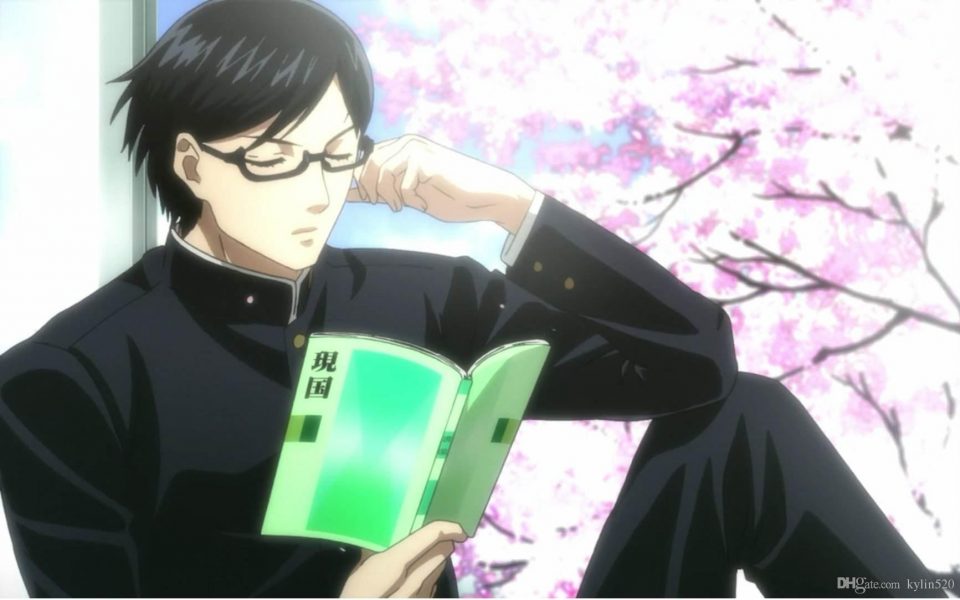 Even when I’m starting to think of ‘Sakamoto Desu ga’ (also known as Haven’t You Heard? I’m Sakamoto) as an entire anime what simply comes to my mind is the magnificent titular character “Sakamoto”. That’s what makes this anime stand out from all others. It has a very simple story and yet it is revolutionary in its own unique way. Anime like ‘One Punch Man‘ or even ‘Great Teacher Onizuka‘ portray badass characters who either have superhuman abilities or aspire to reform the whole Japanese education system. But ‘Sakamoto’ does none of that and instead, it presents a story that we may all have experienced at one of time. And knowing that it comes from Shinji Takamatsu, who is known for directing ‘School Rumble‘ and ‘Gintama‘, it becomes pretty obvious that this anime is going to be one hell of a comical ride.

High school may not have been the most pleasant years for most and we’ve all journeyed through its loneliness and embarrassing moments that made us ponder for long periods of time. This where the lead of the anime, Sakamoto, comes in who is the perfect definition of a cool high school kid. Just by looking at his vigor, strength and intellect, one can’t help but think about how amazing would it be to understand the value of accepting one’s individuality back in the day. Many would complain that the characters of ‘Sakamoto Desu ga’ are nothing but bland “cardboard cutouts” because of its lack of supporting characters. But if you think about it, the whole point of not having any other characters is to idealize the personality of the main character whose story is being told.

When it comes to the technical aspects of this anime, the animation part of it has been done by Studio Deen. The Studio has had its own share of ups and downs and is now widely known for producing ‘Fate/Stay Night‘ and ‘Fruits Basket‘. But with ‘Sakamoto Desu ga’, the studio goes above and beyond what is expected from it. The voice of the main lead has been taken over by Hikaru Midorikawa who is not all that well-known because he has mostly voiced side characters in anime like ‘Angel Beats‘ and ‘Code Geass‘. But with his work in this, he clearly proves that he deserves to voice the lead characters of a lot more shows than he actually gets. The opening and ending themes are just as cool as Salamati himself and fit right in with the whole vibe that the anime offers. Overall, don’t be fooled by the reviews of ‘Sakamoto Desu ga’ that claim that this anime is no good because it lacks a proper story and has no characters at all. Watch it for yourself and only then you’ll know how amazing this comedy show is.

Sakamoto Desu ga Release Date: When will it premiere?

‘Sakamoto Desu ga’ season 1 premiered on April 8, 2016 and with a total of 12 episodes, it went on till July 1, 2016. Apart from this, the anime has also had a special episode that follows more of a side story. Both the anime and the manga it has been adapted from were widely praised by the community for its brilliant portrayal of humor. But even then, a new season seems to very less likely.

The anime covers the entire manga series and as of now, it is unclear whether the mangaka will ever expand the series or not. So because of the absence of any material for further anime development, chances of another season are slim. If there are any confirmations regarding this in the future, we will surely update ‘Sakamoto Desu ga’ season 2 release date here in this section. Till then, you should definitely check out our list of other amazing comedy anime shows.

The English Dub of ‘Sakamoto Desu ga’ is available on Crunchyroll.

‘Sakamoto Desu ga’ has a very simple plot if you compare it with other high school slice-of-life drama anime. Unlike most other drama shows, it barely portrays any form of corny high school romance and solely revolves around one character only.

It tells the story of a young boy named Sakamoto who is not your regular high school student…he is the coolest one out there. As soon as he joins a new school, he instantly becomes popular. The girls love him for being the good-looking and charming guy that he is and the boys just hate him because he steals all the attention. There are other boys in the school who were previously quite popular but have now been replaced by the perfectionist Sakamoto. He even proves to be really good at studies and sports and even the teachers of the school start admiring him.

Other boys of the school get really jealous and plot several pranks to defame him. But somehow Sakamoto outsmarts all of them and manages to stay one step ahead of them at all times. Despite being the famous kid in school, he is always polite to those who approach him and even helps out the ones who are bullied. No matter what his high school life throws at him, he jumps into every challenge head-on with a lot of confidence and class.

Sakamoto is the main titular protagonist of the series. He wears semi-framed glasses and has smooth black hair that is parted to the right. He has dark grey eyes and is known to be the most handsome guy in the entire school. Most girls are head over heels for him and would do anything to date him. He is also taller than most other boys of his age and has a muscular build. Usually, he is seen in his black school uniform with a white undershirt. Sakamoto is a very cool, calm and composed. He never lets anything bother him and wisely solves every problem that he faces. He even helps those in need and an example of this can be seen when he saves Yoshinobu Kubota from getting bullied. Somehow, he can always foresee the near future and this ability to know what will happen allows him to be prepared for anything that’s coming for him.

He deals with everything in a very cool and stylish way and is also very good at studies. He is like the ideal student and for the ladies, he is simply the perfect man. He acts a little weird sometimes and does strange poses in public. But somehow, even his strange behavior makes him look cooler. He also has a range of really cool things known as the “Secret Techniques” that allow him to catch bugs with ease by only using a compass or blow tiny bubbles that look a lot like smoke. Most of his classmates look up to him and wish that they could be half as perfect as him. Meanwhile, he tries to get a better understanding of human social structure by getting involved in stupid childish activities with those around him. Somewhere around the end of the series, he even shows the slightest of human emotions when he looks back at his old high school days. But then he just covers up his entire face with a pie to make sure that no one sees him cry.