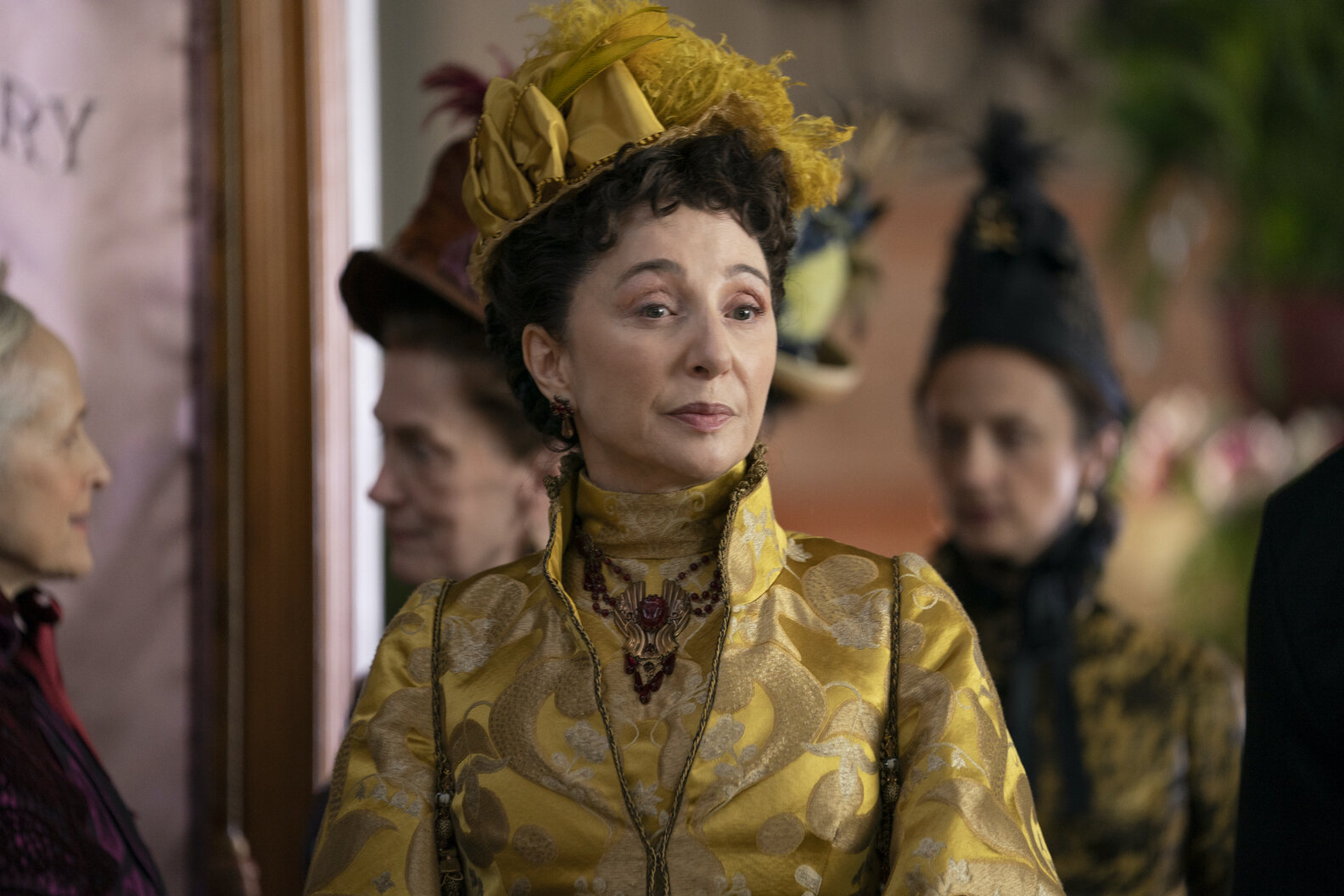 It’s a testament to the ability of Julian Fellowes (Downton Abbey) as a writer that he can make you root for the wealthy and privileged class while they do wealthy and privileged things. In ‘The Gilded Age’ episode 2, Marian (Louisa Jacobson) and Peggy (Denée Benton) try to save the job of Mrs. Bauer, the cook at the van Rhijn household. Tom Raikes (Thomas Cocquerel) reveals that he has decided to move to New York permanently. Mrs. Morris and Mrs. Fane hold a charity bazaar and inevitably insult Bertha (Carrie Coon). Here is everything you need to know about the ending of ‘The Gilded Age’ episode 2. SPOILERS AHEAD.

Episode 2 begins with a large and imposing man threatening Mrs. Bauer for the gambling debt she has accrued. Desperate, she tries to pay him off with silver candle-holders that she steals from the van Rhijn home, but he is only interested in cash. Peggy sees their interaction and later tells Marian about it. Marian approaches Oscar (Blake Ritson) to ask him for the money that Mrs. Bauer owes.

He agrees to give the money under one condition: Marian will give a luncheon party and invite Gladys Russell. Marian realizes that Oscar is a fortune hunter and is after Gladys for one reason but has no other choice but to accept. Fortunately for her and Gladys, Aunt Ada (Cynthia Nixon) finds out about everything and steps in.

Mrs. Morris and Mrs. Fane organize a charity bazaar, which is set to be held at the veteran’s room at the New 7th Regiment Armory. Predictably, they don’t ask Bertha to join the endeavor. George asks Bertha to invite Mrs. Morris and her husband, Alderman Patrick Morris, for dinner. Unlike his wife, who is extremely reluctant to go, Patrick is intrigued. He knows that George Russell is a force in New York, and he can’t afford to get on his bad side.

After dinner, the two men talk over a game of pool. George reveals that he wants to build a new station in the city for his railroad from New York to Chicago and needs Patrick’s help to make it a law. In exchange, he tells the alderman that the latter and his colleagues can buy shares on margin in his company which is bound to go sky-hight once the bill is passed. Later, Patrick informs George that the other aldermen have agreed to his proposal. However, they have certain reservations about George, whom they likely consider a robber baron.

The Gilded Age Episode 2 Ending: Why Does George Russell Buy Everything at the Charity Bazaar?

George Russell is depicted as one of the most prominent railroad tycoons in the country, with massive wealth and power. But as the title suggests, money isn’t everything in the New York polite society. Most of the families that are part of the top social tier can trace their wealth back to the Revolutionary War and earlier. They consider anyone trying to get in as upstarts, and the Russells are no exception.

However, the problem for people like Mrs. Morris and Mrs. Fane is that they are ultimately fighting a losing battle. Change is inevitable. If they don’t accept it, there is a chance that they will be swept by it. And neither of them is influential enough in society to maintain their social position if that happens. They discover that they can’t host the charity bazaar at the Armory as it was doubled booked. When Mr. and Mrs. Morris earlier visited the Russell home for dinner, Bertha offered her grand ballroom as the venue for the bazaar if the Armory were to become unavailable. When it does, the two women select the Fifth Avenue Hotel.

This decision frustrates Patrick Morris, who has no intention of agitating George because of their deal and infuriates Bertha. On the day of the bazaar, the entire Russell family shows up. George pays $100 to every vendor there to buy everything they are selling and then instructs them to deliver the goods to his home within an hour and subsequently close and dismantle their shops. This demonstration of power and wealth leaves everyone stunned. Even Mrs. Astor (Donna Murphy), the leader of the New York polite society, is impressed by the move and compares George to a roaring lion.

The bazaar was supposed to last three days. George’s actions end it shortly after it was inaugurated. On one hand, it is the most successful bazaar of the season. On the other hand, these gatherings are used by the members of the polite society to conform their statuses to each other. By one swift move, George forces the people with old money to realize that he is someone to be reckoned with.

Read More: Will Marian and Tom Raikes End Up Together in The Gilded Age? Theories