Welcome to Eden Ending, Explained: Who is Isaac? 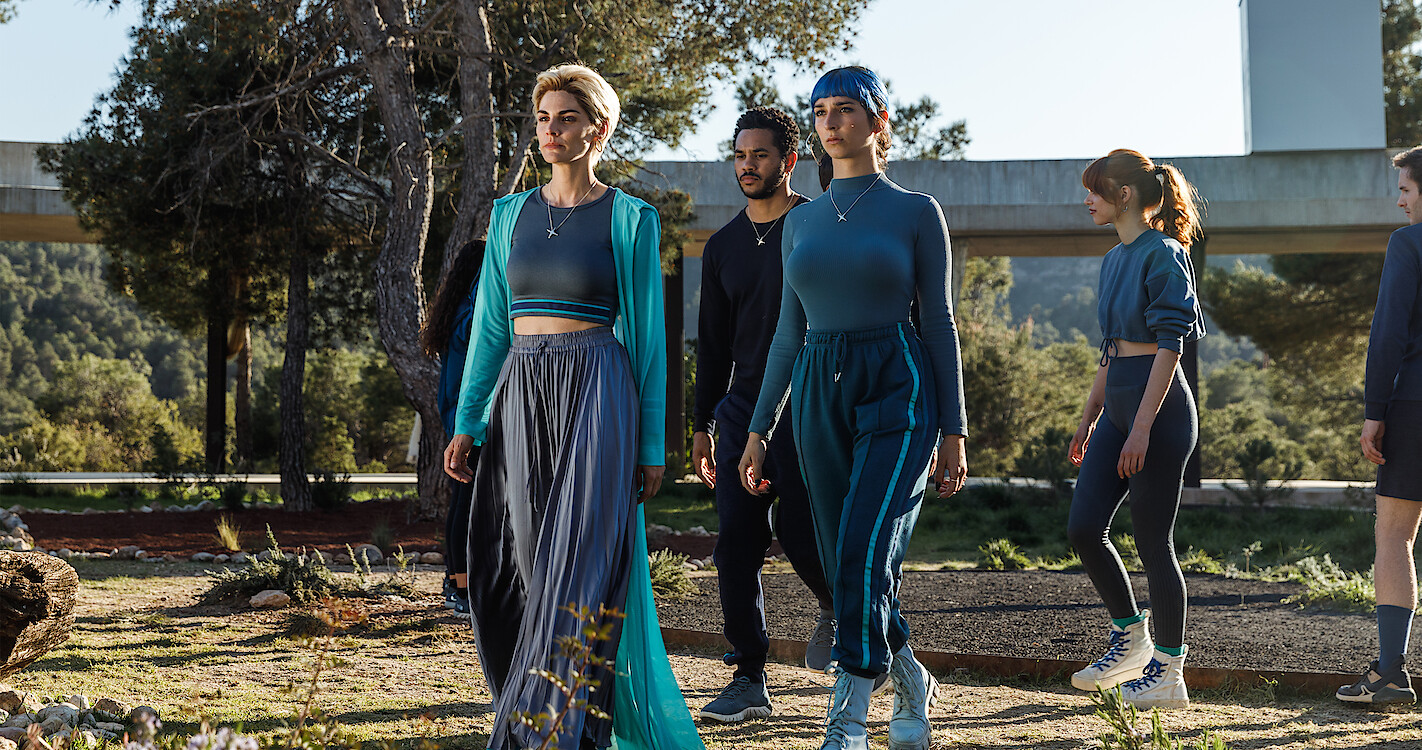 The inaugural season of Netflix’s Spanish thriller-drama series ‘Welcome to Eden’ begins in a very Parker Pyne manner. Zoa (Amaia Aberasturi) receives a message on her phone from an unknown number asking her whether she is happy. Becoming instantly curious, she answers and learns about a launch party for the energy drink Blue Eden. It is supposed to be held on a paradisical island.

Although the invitation is just for her, Zoa decides to take her best friend Judith (Ana Mena) with her. However, Zoa and other new arrivals soon discover that everything on Eden is not what it seems, and they are probably now in the clutches of a dangerous cult. Meanwhile, the family members of these young men and women, including Zoa’s sister Gab, begin searching for them on mainland Spain. Here is everything you need to know about the ending of ‘Welcome to Eden’ season 1. SPOILERS AHEAD.

After arriving on the remote island, Zoa and other new arrivals spend the entire day partying. Guests are given wristbands that only light upon certain people. Later, these people drink Blue Eden, which seems to contain some kind of hallucinogenic. When Zoa wakes up the following morning, she finds that only she and four others — África (Belinda Peregrín), Aldo (Albert Baró), Charly (Tomas Aguilera), and Ibón (Diego Garisa) — among the new arrivals are left on the island.

The rest, including Judith and David, the boy she was with at the start of the party, are gone. None of them have much memory of what exactly happened. Astrid (Amaia Salamanca), the head of what appears to be a community, greets them along with her partner Erick (Guillermo Pfening). Zoa and the others are told they have missed the boat. Astrid assures them that the boat will return the following day. Until then, she offers them the community’s hospitality.

They apparently call the community Eden. They claim that they provide shelter for men and women who don’t have anywhere else to go. But their malicious intent quickly becomes clear. The promised boat never returns, and the new arrivals gradually realize that they are being expertly manipulated to force them to join the community. Aldo is the only one to suspect the residents of Eden from the beginning. He tries to get off the island and is killed in the process. Zoa later finds out that Judith never left the island. She was killed the day after the party.

Meanwhile, in Barcelona, Gabi becomes worried about her sister. She receives a message from what appears to be her sister’s phone, telling her not to worry. Almost all the phones of the new arrivals were confiscated when they boarded a boat to go to Eden. The message is sent by Mayka, Astrid’s trusted tech expert. Gabi finds some messages David left on her sister’s social media by accessing Zoa’s account through one of her older phones. She goes to San Sebastián to meet David and learns about Eden.

Elsewhere, Ibón’s wealthy and abusive father hires a private detective to look for his son. In the season 1 finale, Zoa and Charly make a desperate attempt to leave the island, receiving help from Bel, the leader of the resistance and Zoa’s lover. Gabi ensures that she will be on the next boat to the island. We learn about Isaac, a mysterious boy with certain abilities.

Welcome to Eden Season 1 Ending: Who Is Isaac?

One night, shortly after drinking Blue Eden, Zoa thinks she sees a young boy. She tries to follow the child but loses him. She tries to find out who the boy is but is told that no child lives on the island. In the penultimate episode, after Erick gets seriously injured during a home invasion, Astrid drives him to a remote part of the island, and we are formally introduced to Isaac for the first time. Isaac apparently possesses healing abilities, with which he heals Erick’s injuries. The show neither offers an explanation for Isaac’s powers nor does it delve into his identity.

However, in Isaac’s module, there is a sketch that he drew of him, Erick, and Astrid together. It seems that the Eden cult revolves around Isaac, even though no one else in the cult is aware of him. The first time that Isaac is mentioned, the show makes it seem that he is Astrid and Erick’s superior in the cult hierarchy. But things appear to be further complicated than initially thought. There is a significant chance that Isaac is Erick and Astrid’s biological son. Even if he isn’t, it’s ultimately immaterial. They plan to visit the real Eden, which means that their cult considers that the real paradise is out there somewhere.

Do Zoa and the Others Leave Eden? Is Ulises Dead?

Of the new arrivals, Aldo perishes while attempting to get off the island. The rest are forced to merge themselves into the community to survive. They eventually realize that the inside of the island is hollow, and they can use it to escape from the island when the next batch of directionless youths arrive. Ibón, who doesn’t want to face his father ever again, is reluctant to go, as is África, who has developed feelings for Erick.

Eventually, Zoa and Charly are the two people that attempt to use the chaos of the newcomers’ arrival to flee from the island. Zoa gets attacked by Ulises, the head of Eden’s security, but Ibón intervenes in time and kills him. Charly reaches the boat successfully, and Mayka lets him go. Just as Zoa is about to reach the boat, she notices Gabi disembarking. Her sister has come to rescue her and has effectively undone her plans. Although the season ends there, we know that Zoa can’t leave. Charly still might, but he doesn’t seem like a person that will leave his friends behind. Both of them are likely to go back into the hell they know as Eden.

What Is the Secret Room behind the Painting?

Neither África nor any other community member knows about the attack on Astrid and Erick. The perpetrators use the symbol of Lilith. In Mesopotamian and Judaic mythology, Lilith is the first wife of Adam. She was created alongside him but was removed from Eden because she refused to obey Adam. The rebels are evidently using her symbol as a potent tool in their struggle against Eden.

As Erick has been moved to Isaac’s module, África can’t find him. Instead, she ends up opening a secret door through the replica of the Landscape with Charon Crossing the Styx, a painting by Flemish artist Joachim Patinier. There is a large space on the other side, which seems to house the CPU of a supercomputer. Almost on a whim, África presses a button that says “Open” on the screen. The alarm suddenly begins to go off, and the satellite near Isaac’s module starts to move. An A.I. voice then repeatedly says, “Sending signal to outer space, waiting for response.”

And this is where the real mystery of the show lies. Whose response is the computer waiting for here? Until the final episode, ‘Welcome to Eden’ was a typical cult thriller. But with the introduction of Isaac’s healing ability, the show has opened itself up to new genres, including science-fiction, fantasy, and horror. Whatever entity is supposed to be on the other end of the signal is the one that Eden worships as a community. The realm it resides is in is the real Eden that Astrid mentions.