What is the Hole in Outer Range? Theories 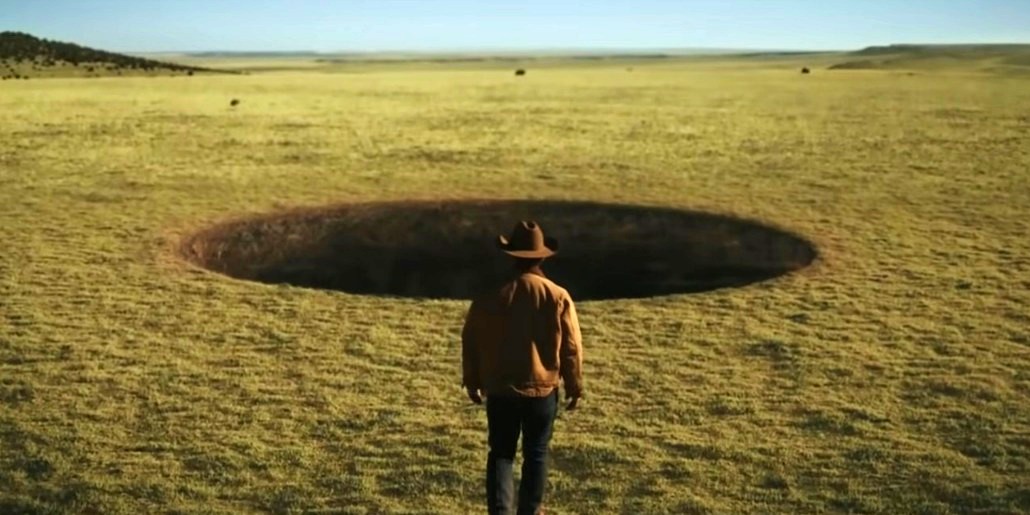 ‘Outer Range,’ created by Brian Watkins, is a mystery series that revolves around Royal Abbott (Josh Brolin), the patriarch of the Abbott family who owns a ranch in the Wyoming wilderness. As Royal fights to protect his family and land, his life turns upside down after discovering a mysterious black void in the middle of his property.

As the narrative progresses, viewers learn a little more about the hole and its properties. Although the true nature of the void remains unclear, the show provides ample clues for the viewers to theorize about the mysterious anomaly on the Abbott family’s land. If you wish to find out more about the black void in ‘Outer Range,’ here are our theories on the matter! SPOILERS AHEAD!

What Is the Black Void?

In the series premiere episode of ‘Outer Range,‘ Royal Abbott discovers a mysterious black void on his Western Pasture. When he throws a few items into the void, it swallows them without leaving any trace. However, when Royal dips his hand into the hole, he receives a brief vision of events yet to unfold. Later, when Autumn pushes Royal into the black void, he wakes up roughly two years into the future. Therefore, from the first two episodes, it is evident that the black void has some time and space alteration properties.

The first possibility due to its appearance is that the void is actually a black hole that has appeared on the Abbott family’s land. However, black holes generally have a high gravitational pull, and anything that passes the event horizon of a black hole is likely to be decimated. Since Royal falls into the Black Void and returns almost unscathed, it is safe to say that the mysterious dark hole on his land is not a black hole.

Secondly, given its time and space-altering abilities, the black void could be a wormhole. A wormhole is a speculative structure known for connecting to separate points in the space-time continuum. It has been theorized by scientists that a stable wormhole could be used for time travel. After Royal falls and wakes up on the other side, he sees that government officials have seized his land and are conducting some sort of mining activity.

Thus, it is safe to say that the Black Void is extraterrestrial, and some facts suggest it could be a wormhole. Although wormholes are associated with time travel, they have also been theorized to support interuniversal travel. Hence, it is likely that when Royal falls into the black void, he finds himself in a parallel universe. His wife mentions that in this universe, Royal died two years ago, thereby supporting this possibility.

Wormholes have been long used in science fiction as the source of time travel, and the same could be true for the show’s iteration. However, given the characters’ reactions and the other events unfolding on the Abbott ranch, it is likely that the Black Void has a supernatural origin and not a scientific one. The same is hinted at in the show’s opening scene through a monologue that explains the story of the Greek God Kronos, who carried a sickle that could cut holes in the universe, separating the known from the unknown. Kronos is also associated with timekeeping. Therefore, it seems likely that the black void could be a passage between alternate universes or timelines.

Therefore, it seems that the show is setting up some mystical and supernatural explanation for the Black Void. Moreover, Autumn mentions that a mysterious force drew her to the Abbott family’s ranch, which further supports that there is an angle of faith or superstition attached to the Black Void’s existence. Lastly, Kronos’ story in Greek mythology reflects a brutal karmic cycle, and the void’s presence could signify a similar fate for Royal and his family. All things said and done, the black void is most likely a wormhole created through supernatural means that allows an inexplicable movement through the space-time continuum.